Jurgen Klopp was not kind about Atletico Madrid back in 2020, but Diego Simeone seemed unruffled by those comments.

Diego Simeone was typically curt when asked about Jurgen Klopp's 2020 criticism of Atletico Madrid's style of play ahead of the teams' reunion on Tuesday.

Atletico progressed to the Champions League quarter-finals in 2019-20 thanks to a 4-2 aggregate win over Liverpool, which was aided by a remarkable turnaround in the second leg.

Atletico found themselves 2-0 down early on in extra time, but two goals from Marcos Llorente before the halfway mark of the additional 30 minutes quickly turned the tie on its head, and Alvaro Morata sealed Liverpool's elimination right at the end.

Jurgen Klopp seemed particularly irritated by the defeat because of Atletico's methods, telling BT Sport at the time that he could not "understand, with the quality they have the football they play", suggesting they had the ability to "play proper football" but chose not to.

Indeed, Liverpool had 71 per cent of the ball and 34 shots, which translated to an expected goals (xG) value of 3.5 – Atletico's 10 attempts equated to 1.1 xG, meaning they scored almost three times as many goals as the average team would ordinarily expect given the quality of those chances.

Jan Oblak undoubtedly played a part, with his saves adding up to a full goal prevented in xG terms, while at the other end, Adrian was deemed a weak link and his goals prevented figure was -0.7, suggesting he should have done better.

The two teams will meet for the first time since then at the Wanda Metropolitano on Tuesday and Simeone was unsurprisingly asked for his opinion on Klopp's comments – his response was perhaps to be expected.

"Nothing," he replied with a massive grin, a brief awkward silence following.

But soon after he was queried on his perception of Liverpool, and the Argentinian coach was glowing in his appraisal.

"Chelsea, [Manchester] City, Liverpool are all fantastic, but watching Liverpool is a real pleasure," he continued.

"They press high, play a high line, they have no fear of leaving spaces at the back. They have very quick players to go on the break. With [Virgil] van Dijk now [back from injury], they have improved their solidity in defence, which is very important even for a team like Liverpool. 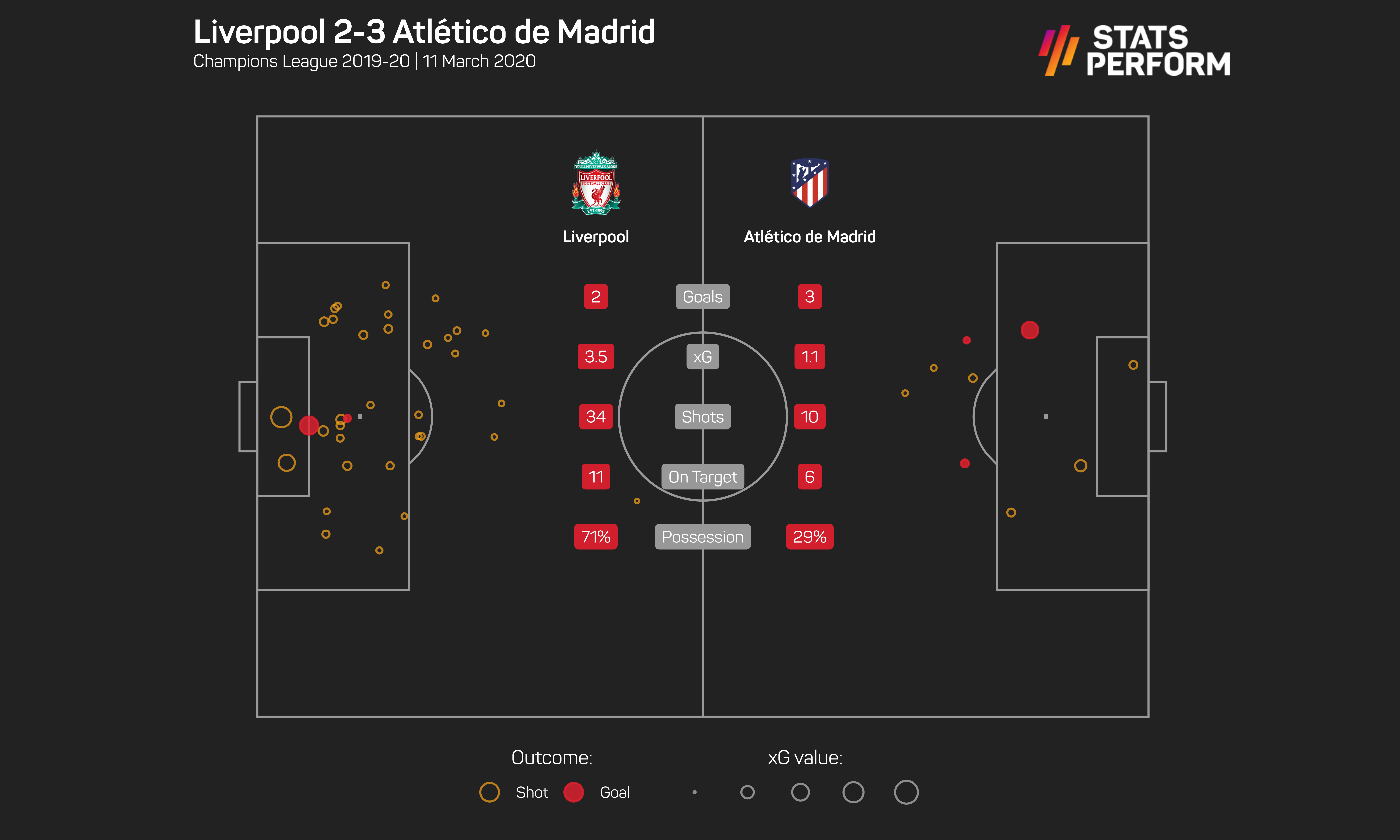 "I don't expect anything other than a team who will make things very difficult for us. We will try and find a way to hurt them, we need to match their intensity and will look to create our own chances."

Atletico captain Koke played in that previous tie with Liverpool and was also asked about Klopp's comments – his conclusion was that Simeone's team will never change.

"We are going to keep on playing our style, which is to try and compete and win and that is never going to change.

"Every team has different mentalities and different ideas about what the best football is. We just try to play the best way to get a victory, it doesn't matter if we have more or less passes."

Liverpool have lost six and won none of their past seven away Champions League matches in Spain since beating Real Madrid in 2008-09 – though they did win the 2018-19 final at the Metropolitano as a neutral ground.