Manchester United held Chelsea to a 1-1 draw in a game that showed both their strengths and shortcomings.

When Manchester United sacked Ole Gunnar Solskjaer and announced a caretaker manager would then be followed by an interim manager to be replaced by a third coach at the end of the season, confusion would have been written over the faces of many supporters.

It seemed an unnecessarily convoluted process to just appointing someone better than Solskjaer, but perceptions are already starting to change.

Michael Carrick had a pretty daunting introduction to life at the helm, with a crucial Champions League match followed by a trip to imperious Premier League leaders Chelsea.

Yet, after what was presumably his second and final game in charge, he's seen United take an entirely respectable four points – Ralf Rangnick waits in the wings, and there were even hallmarks of the German on display as Carrick presided over Sunday's 1-1 draw at Stamford Bridge.

There could be no mistaking what was going through Carrick's mind before the game. While he shrugged off Cristiano Ronaldo's benching as just simple squad selection, one of the main focuses on the Portugal star this season has been a lack of work rate off the ball.

Given Rangnick's reputation and renown as the so-called 'Godfather of Gegenpressing', it can't have been a coincidence that Carrick opted to start a front three who would ordinarily be expected to get through a little more work when not in possession.

Getting in Chelsea faces appeared to be the objective, and to United's credit, there certainly seemed to be a greater desire to press with intensity during the early stages of the match.

While that may have been a sign of things to expect in future for United, it would also be fair to say they have much work to do as well – their urgency out of possession may have looked better, but it didn't seem to upset Chelsea massively.

The Blues still created a raft of opportunities, two of which were crafted inside the first three minutes and 10 seconds, with Aaron Wan-Bissaka and Victor Lindelof unconvincing on both occasions. 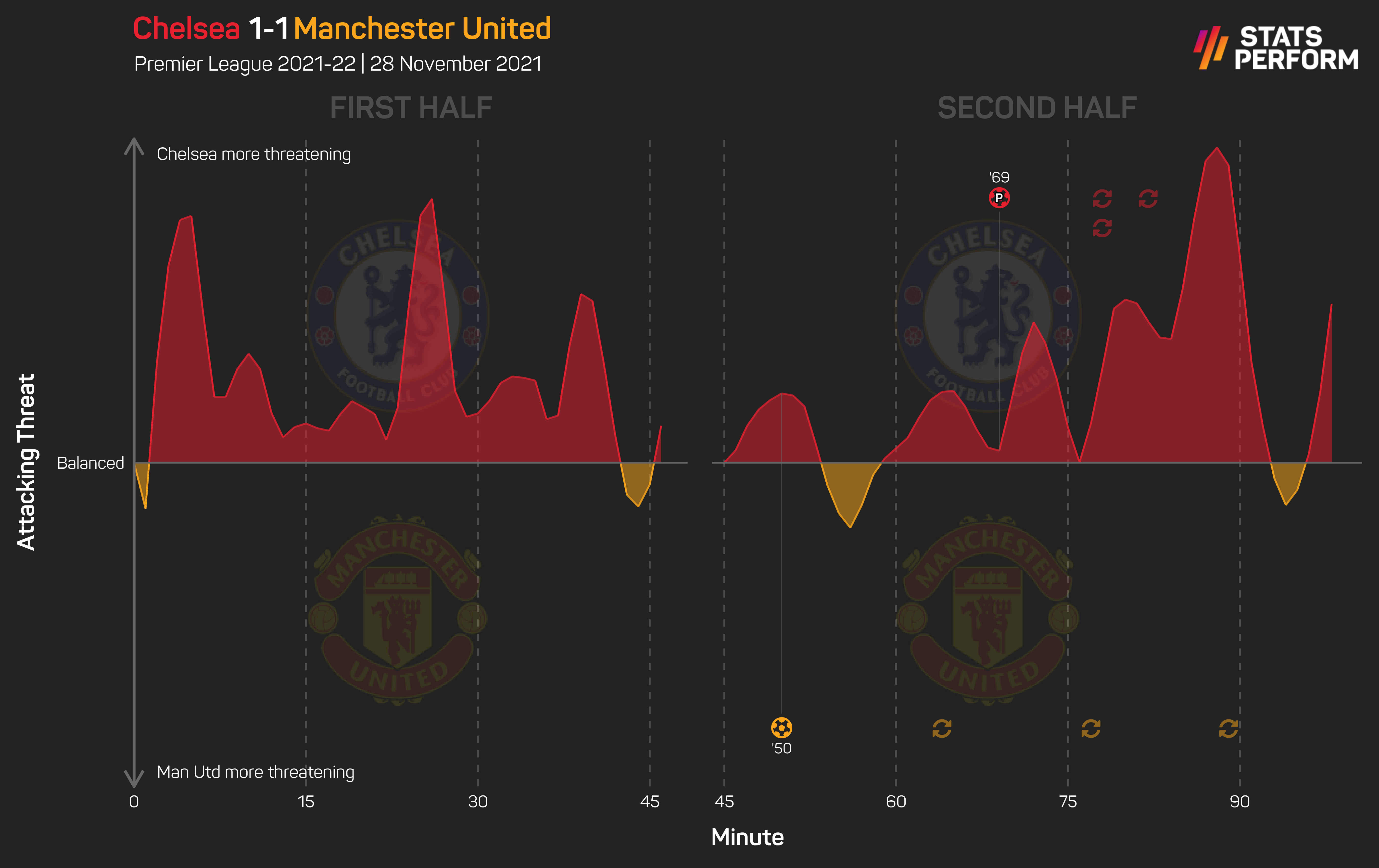 Those accounted for two of the four saves David de Gea was forced into before the break, the Spaniard also tipping a long-range Antonio Rudiger strike onto the crossbar.

Chelsea reached half-time with no goals from 0.86 expected goals (xG), showing United (0.02 xG) were benefiting from a mixture of wasteful finishing and De Gea's excellence – so while Carrick's set-up technically worked to a certain extent, keeping the hosts out in the first half, the Red Devils offered nothing in attack themselves.

Jadon Sancho and Marcus Rashford were sloppy, Bruno Fernandes – deployed as a 'false 9' – seemed to be playing by his own rules, going rogue as he often popped up in the full-back areas. Nobody was leading the line and therefore United had no out-ball.

As a result, they managed just two touches in the Chelsea box and 21 passes in the final third – Thomas Tuchel's men had 16 and 81, respectively. United's mid-game tweet of "leading from the front" accompanied by a photo of Fernandes almost seemed sarcastic when Sancho was their only player whose average position was in the attacking half during the first 45.

Leading from the front

But early in the second half, the game changed in an instant. Fernandes leathered a bouncing ball up the pitch with the kind of kick that would be followed by a shout of "have it!" in your average Sunday League game.

Jorginho's first touch was similarly Sunday League, the ball squirming off his foot and right to Sancho, who charged forward with only Rashford for company. A little swivel of the hips, suggesting he'd square the ball, deceived Edouard Mendy and the forward slotted home his first Premier League goal.

Of course, it was hardly a goal indicative of some new-found philosophy – it was a Jorginho error. Yet, had United not been pressing in anticipation of a mistake, they wouldn't have scored.

United suddenly started to look a threat on the counter-attack with Sancho and Rashford, who was far livelier than he had been in the first half – though Carrick might have wanted to see his team use their countering as a weapon a little more often.

As it was, they soon fell back into their set-up from the first half for the most part, sitting back in their own area and inviting pressure. It brought their downfall, as Wan-Bissaka's rash penalty concession allowed Jorginho to atone for his error at the other end.

United were fortunate, with Rudiger's late volley going high and wide when he looked destined to score, though they at least showed the kind of urgency and spirit that was lacking in recent embarrassments at the hands of Liverpool and Manchester City. 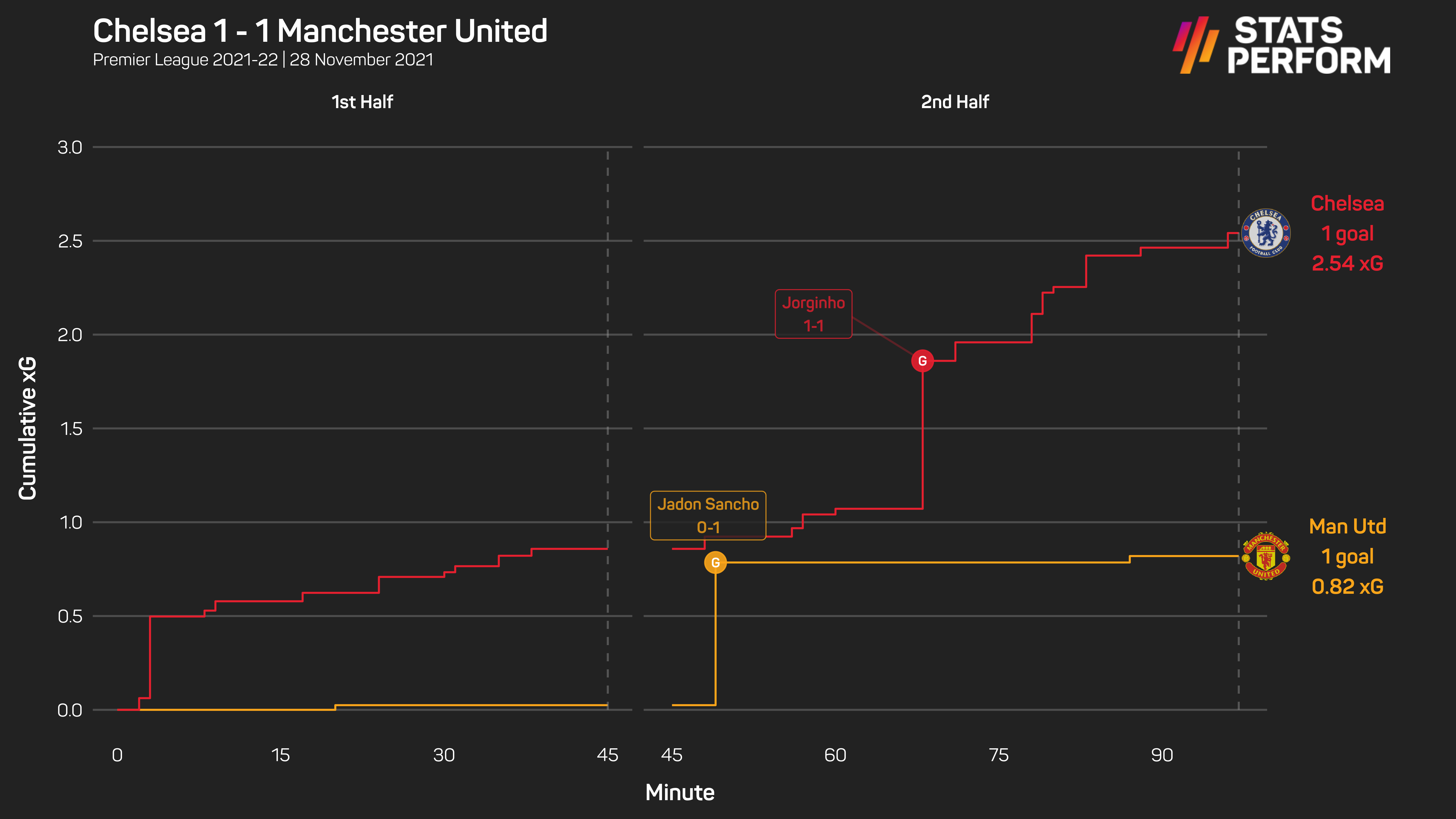 Rangnick's main concerns will likely lie in the tactical mishmash he stands to inherit, and in some ways this game showcased it perfectly. One minute their priority was pressing, the next it wasn't. They began to set up for counter-attacking, then they weren't.

Let's not forget, this is a squad assembled by several different coaches all with hugely varying ideas – from Louis van Gaal's possession-based approach and Jose Mourinho's pragmatism, to Solskjaer's counter-attacking (not that he stuck with that throughout his time in charge) and now Rangnick's 'Gegenpressing'.

The draw at Chelsea certainly shows Rangnick will have a lot to work with. The off-the-ball performances of Fred and Scott McTominay would have been particularly encouraging. But it also highlighted he has a lot of work to do.

Australian Open: Nadal goes from career doubts to brink of record in Melbourne

Rafael Nadal is one win away from breaking a record, but such a run at the Australian Open seemed impossible just months ago.