Paul Pogba felt Manchester United deserved their 4-2 defeat at Leicester City and claimed the Red Devils have a long-standing "problem" they must resolve in terms of performances.

United's English football league record of 29 consecutive away games unbeaten came to an emphatic end at the King Power Stadium, where they conceded four times in a Premier League match on the road for the first time since April 2019 at Everton.

Mason Greenwood's spectacular opener was cancelled out by Youri Tielemans, and Caglar Soyuncu put Leicester ahead with 12 minutes remaining.

In a frantic finale, Marcus Rashford equalised on his first appearance of the season only for Jamie Vardy to make it 3-2 just 54 seconds later, with the Foxes restoring their advantage straight from kick-off.

Patson Daka bundled in a fourth in injury time as Leicester made it three wins in a row against United in all competitions for the first time in 120 years.

With four defeats and only two wins from their previous seven games this season, United are in worrying form ahead of a run of fixtures that includes matches against Liverpool, Tottenham, Manchester City, Chelsea and Arsenal, as well as Champions League clashes with Atalanta and Villarreal.

Pogba is concerned that such results are only likely to continue unless something changes. 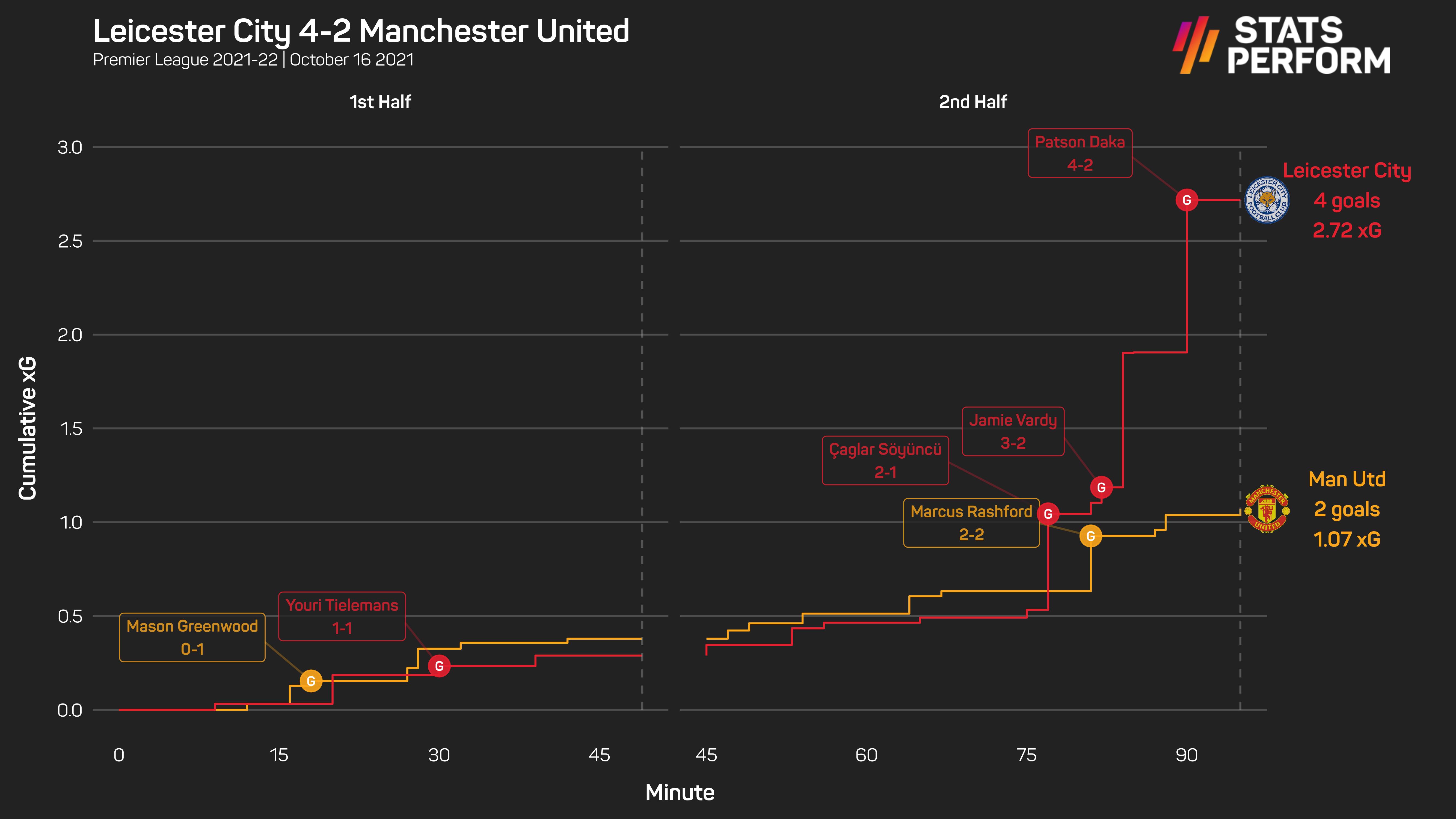 "To be honest, you know, we've been having those kinds of games for a long time and we haven't found the problem," he said after the match.

"We need to find the problem. To concede goals, easy goals, stupid goals, when we know those games you play on this pitch [are ones where] the fans are going to push, put pressure on us.

"We need to be more mature, I think. We need to play with more experience, arrogance, in a good way. We have to take the ball and play our football.

"Now, we have to find the key to this change and this game. I think we deserved to lose today.

"We need to find something, we need to change something. I don't know if the mindset of all of us, the players, when we start... we really don't know. It's frustrating because it's something we don't understand and we have to find that very fast because if you want to compete and you want to win the title, those games you have to win, even though they are very hard and we're playing away.

"You need to fight their game, you need to find the right mentality, the right tactic to win those games. That's my thought. We have time to think about it and then all together, we have to stick together and find the problem."

"Of course, we are disappointed. Everyone is sad, everyone is a bit head-down at the moment," he told MUTV.

"We are very disappointed but, in the future, I think we will show that we are much better than this."

A-League: Two from two for Popovic and Victory

Rumour Has It: Man Utd hopeful of Rangnick edge in Haaland pursuit

Ralf Rangnick and Erling Haaland have a pre-existing relationship from their time working together at Salzburg.

Abel Ferreira cited the frenetic schedule in Brazil as he considers his future despite winning the Copa Libertadores.

The Phoenix Suns extended their winning streak to 16 games with a strong victory over the Brooklyn Nets.

James Harden has had an inconsistent start to the new NBA season, registering a triple-double on Saturday but also having seven turnovers.

George Kambosos Jr stunned the previously undefeated Teofimo Lopez with a split decision victory after a first round knockdown.

Suns down Nets to extend winning streak to 16 games, Embiid returns with 42 in 76ers' 2OT loss

The Phoenix Suns claimed a 16th consecutive victory as the Brooklyn Nets struggled with 20 turnovers for the game.

Joel Embiid revealed the brutal severity of his COVID-19 experience after scoring 42 points in his return after nine games out.

Juventus are the subject of an investigation from police in Turin.