They may not start the Champions League final, but Eduardo Camavinga and Rodrygo have shown they do not need long to impact a game.

Regardless of what occurs on the pitch at the Stade de France on Saturday, the 2021-22 season will have been a good one for Real Madrid.

Even if they are ultimately left with only the Spanish top-flight title to show for their efforts, there's an argument to be made that Carlo Ancelotti has defied expectations in his first campaign back at the Santiago Bernabeu.

Given the important losses of Raphael Varane and Sergio Ramos coupled with the fact only two new players were incoming, it would've been understandable if fans were less demanding than usual in their pre-season predictions.

After all, Ancelotti was seen as a safe pair of hands rather than someone who was going to come in, shake things up and preside over a philosophical overhaul – and looking back over the course of the season, he's been the perfect appointment.

Of course, the turmoil at Barcelona helped Madrid's cause, while Atletico Madrid's title defence fell flat early on. For a while Sevilla looked to be the only challengers to Los Blancos, but given they ran out of steam in the previous campaign, it's unlikely Ancelotti and his team will have been unduly worried by them – they ended up scraping a top-four spot.

As composed and dominant as Madrid were at LaLiga's summit, fans, pundits and journalists alike did go searching for potential weaknesses, or reasons for the chasing pack not to give up hope.

One area that appeared to be brought up more than most was rotation and the risk of burnout.

Between the start of the season and the end of December, six Madrid players had featured for more than 1,400 minutes in LaLiga. There are no surprises in this list: they would be considered the majority of the team's core players.

In the same period, only Espanyol (seven) had more players feature for at least 1,400 minutes in LaLiga, but they didn't also have Champions League football to contend with. Sevilla had three players meet the criteria; Barcelona had two and Atletico Madrid just one, goalkeeper Jan Oblak. 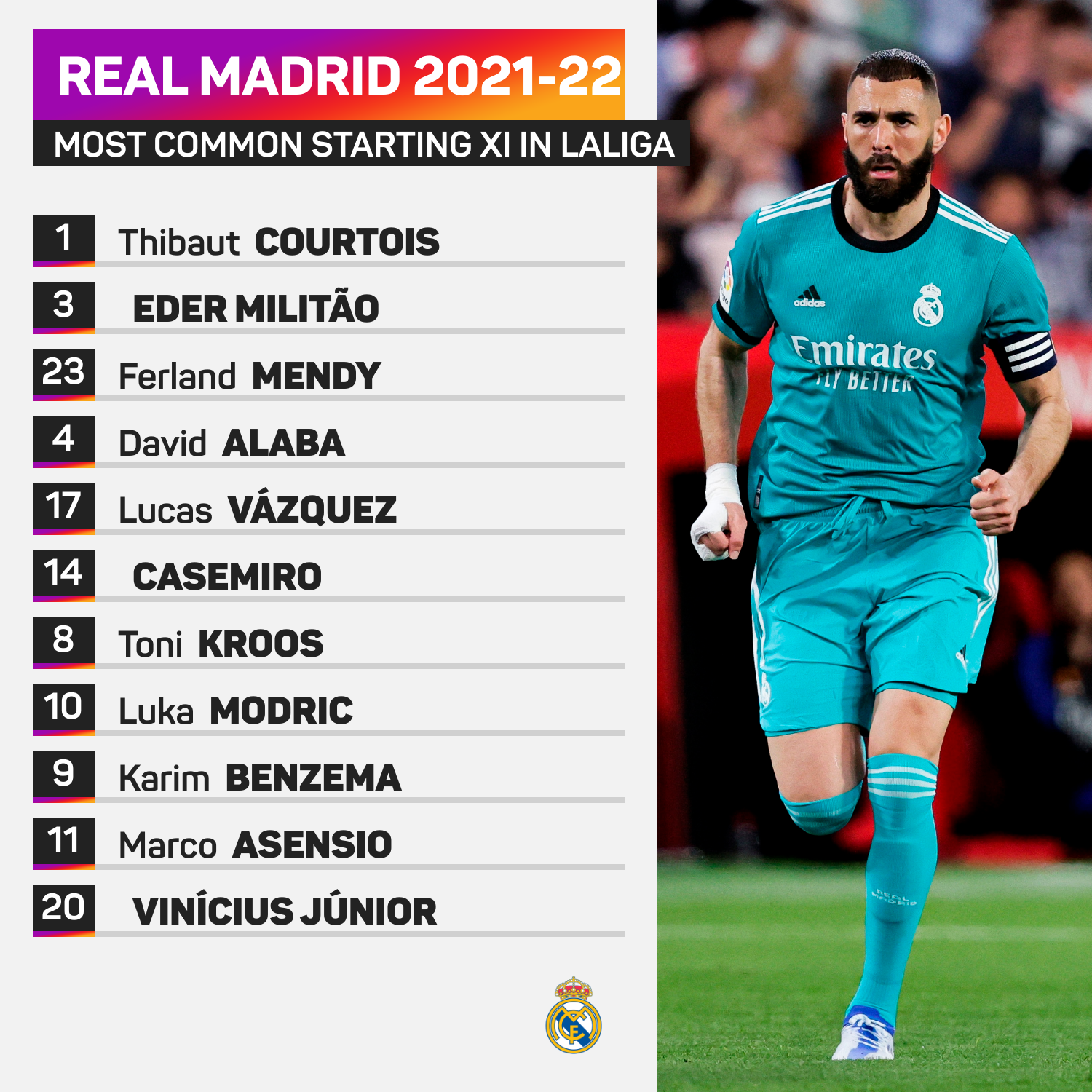 Similarly, Madrid named the same starting XI three times in LaLiga this season. While that doesn't sound a lot, only Celta Vigo, Getafe, Athletic Bilbao and Osasuna have done so more often.

It's clear to see Madrid have relied on a bigger group of core players than their rivals, and as such concerns about fatigue appeared astute earlier in the season.

But here we are, right at the end of the campaign: Madrid won LaLiga with four games to spare and are preparing to play in the Champions League final – and their route to this stage has relied on the ability to laugh in the face of fatigue, with Los Blancos coming back from the brink three times.

In that sense, you have to praise Ancelotti's squad management. Whether their lack of injuries has been by design or a fluke is difficult to speculate about, but there's clearly an element of Ancelotti swiftly establishing his preferred XI and then only wavering from it when absolutely necessary.

And when he did have to look elsewhere, there's no doubting who his favourites were. 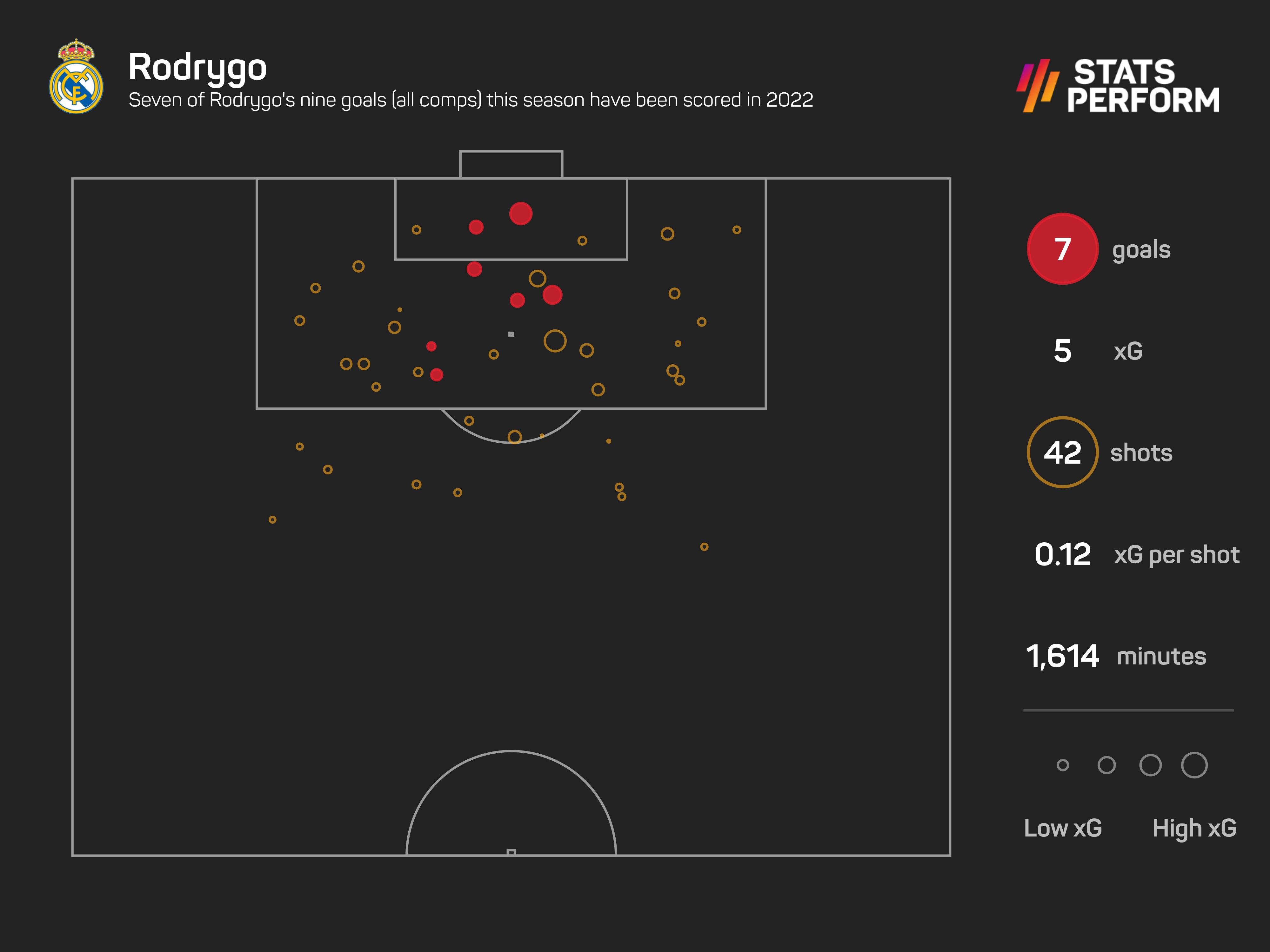 Rodrygo and Eduardo Camavinga have come off the bench 23 times each across all competitions this season, the joint-most in the Madrid squad.

Granted, it's not as if they're two hopefuls promoted from the academy – both were expensive additions to the squad. But the frequency Ancelotti has turned to them as substitutes shows his belief in them to either carry out his instructions or make a difference.

Nowhere was that clearer than in the latter stages of the Champions League. Five of Camavinga's nine appearances in this season's competition have been in the knockouts, while Rodrygo has come off the bench four times in Europe since the turn of the year.

The latter has, understandably, taken a lot of plaudits in the second half of this season. He scored the vital aggregate equaliser against Chelsea, the brace that flipped the City tie on its head, and was inspirational off the bench away to Sevilla in the 3-2 win that essentially wrapped up the title.

Before the turn of the year, Rodrygo appeared to be struggling for relevance at Madrid. There will have been some wondering if he had a long-term future at the club, but he knuckled down after Christmas and has become a genuine weapon, seemingly embracing the fact you can still be decisive even off the bench.

Some might have generally expected more from Camavinga since joining from Rennes last year. He's not been able to establish himself as a regular in midfield at the expense of his more senior colleagues, perhaps unsurprising given he lacks the metronomic abilities of Toni Kroos and Luka Modric and the grit of Casemiro. However, his impact shouldn't be overlooked.

In the second-leg clashes against Paris Saint-Germain, Chelsea and Manchester City, every single one of Madrid's eight goals came after Camavinga's introduction. Those goals ensured Ancelotti's men produced great escapes in each tie.

In fact, over the 146 minutes both Camavinga and Rodrygo have been on the pitch in the Champions League in 2022, Madrid have scored eight times and conceded none. Over 502 minutes without at least one of them on the pitch, they've scored six and let in 11. 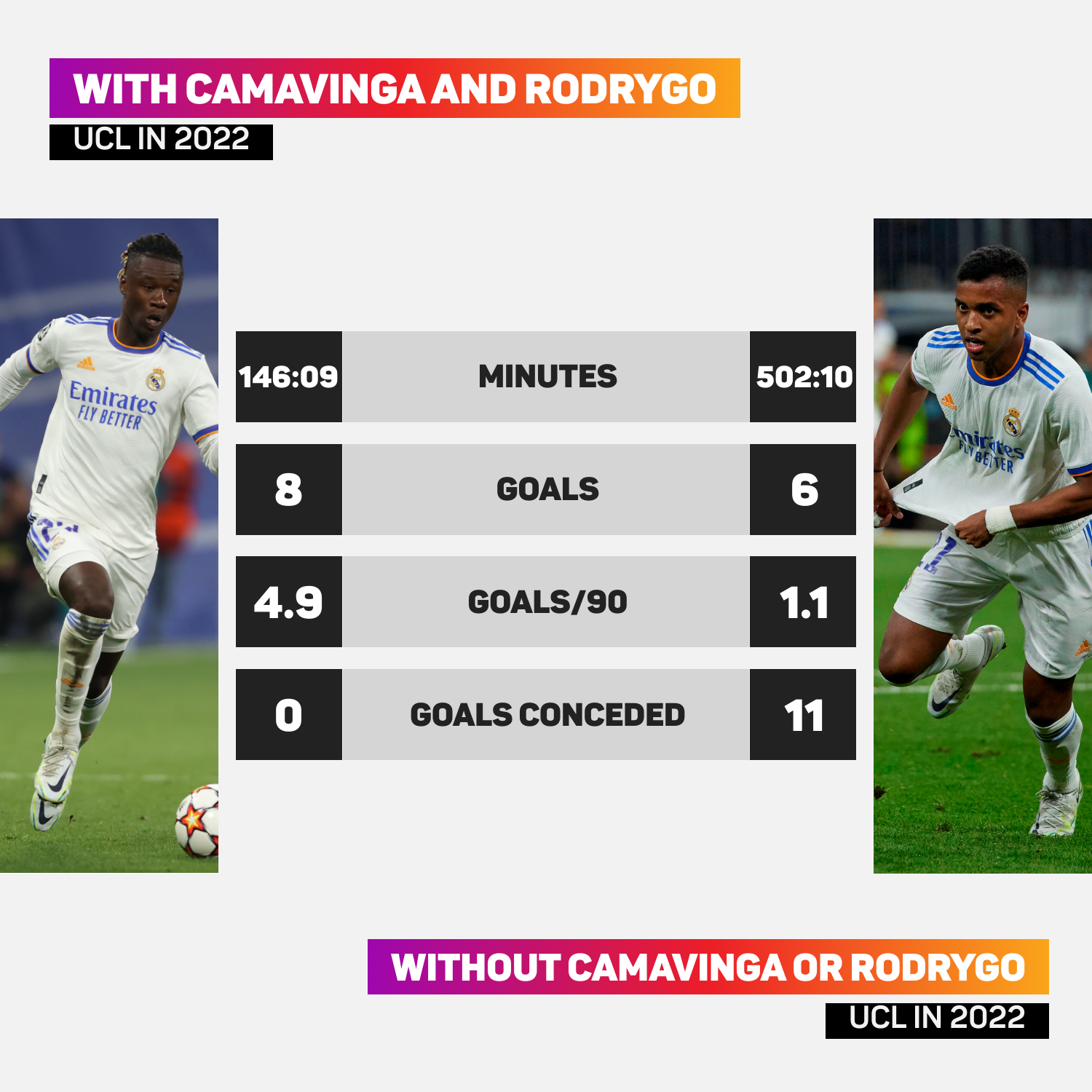 Of course, it's not as if Camavinga himself has been a central figure to all eight goals. His importance in these scenarios is more centred on the wide-ranging skillset he instantly brings to Madrid – he can pass, he's confident on the ball and is a hard-working competitor.

His contributions were notable in all three second legs, but it was against City when he really forced people to sit up and acknowledge him. In the three and a half minutes that followed his 75th-minute entrance, Camavinga showed his poise with a nice switch of play, swept up effectively in midfield as Phil Foden looked to pounce on a loose ball, and then tackled Rodri out wide.

He was happy to accept possession under pressure several times, with one occasion seeing him turn and lift a wonderful pass over the City defence in the 82nd minute as Karim Benzema tested Ederson in goal. A minute later he was darting back in pursuit of Bernardo Silva, ultimately producing an exceptional sliding tackle to win the ball back.

Camavinga then played a vital role in Madrid's first goal in the 90th minute. His inch-perfect lofted pass to the back post allowed Benzema to turn the ball into the danger zone where Rodrygo was on hand to flick home. 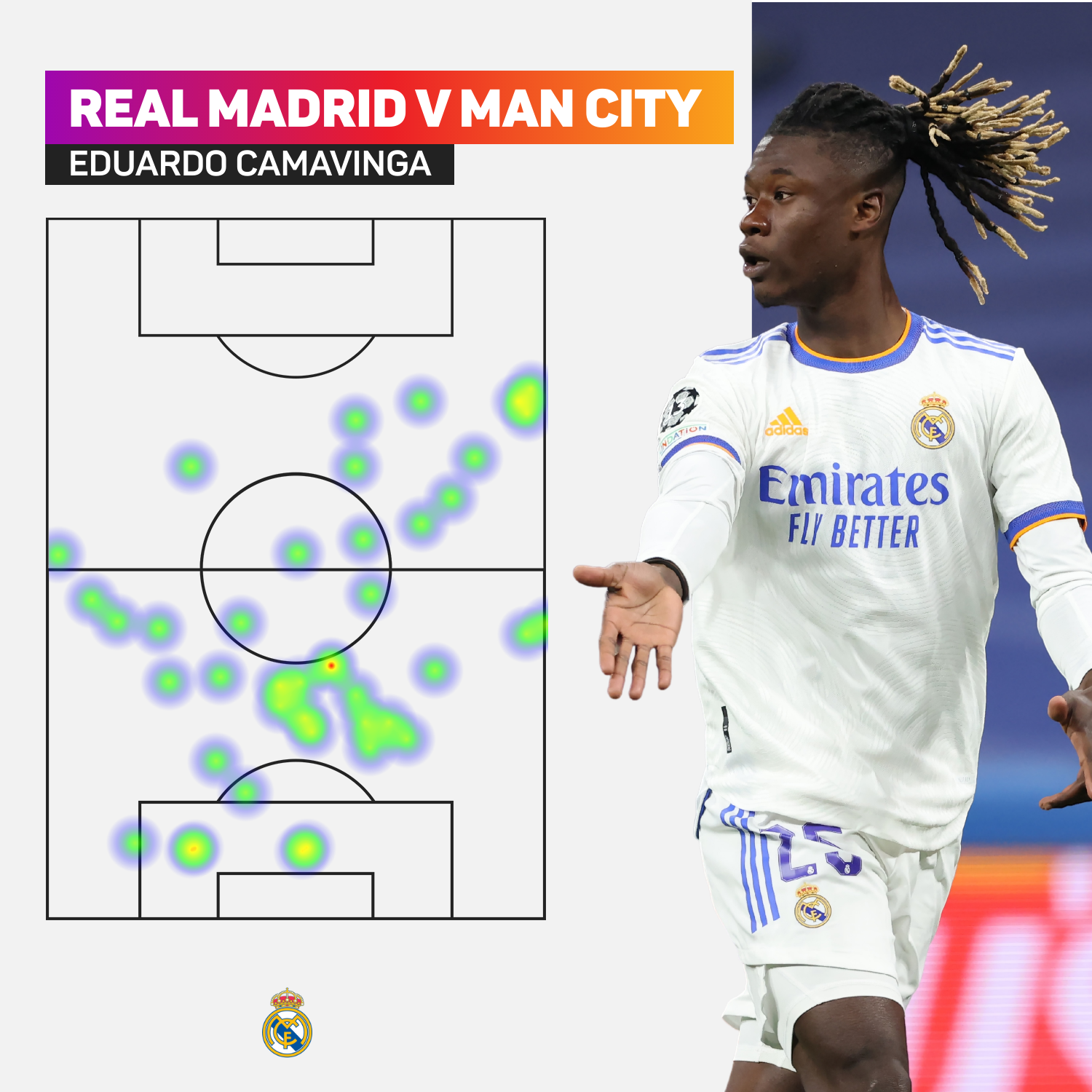 Rodrygo's second in quick succession forced extra time, and Camavinga helped bring about Madrid's crucial third. It was he who carried the ball over half the length of the pitch before finding the Brazilian to cross towards Benzema, who won the penalty from Ruben Dias.

But he showed his value off the ball as well. His four tackles from 45 minutes on the pitch was bettered by only Federico Valverde (five) among Madrid players, and he played the full 120.

His showing was another reminder of the supreme talent Madrid brought in last year and, for many it might've even been enough to earn a starting spot in the final.

Both Camavinga and Rodrygo certainly deserve at least the chance to impact proceedings in Paris, but don't expect Ancelotti to lose faith in his preferred XI at this stage.

Hubert Hurkacz could not repeat his 2021 Wimbledon run but promised €2,100 to the people of Ukraine on his way out.

Wimbledon: Raducanu considers tough season 'all worth it' for win on Centre Court debut

Having enjoyed a breakout campaign at Wimbledon in 2021, Emma Raducanu was promoted to Centre Court this year and won on Monday.

After being drafted in as a COVID substitute for Ben Foakes against New Zealand, Sam Billings is now in contention to feature against India.

Wimbledon: 'Now we're at 80, let's get to 100' – Djokovic makes history with latest victory

With his victory over Kwon Soon-woo at Wimbledon on Monday, Novak Djokovic reached 80 wins in all four tennis majors.

England have turned their fortunes around right away under Brendon McCullum, who has found a kindred spirit in Ben Stokes.

Wimbledon: Djokovic made to work by Kwon for place in round two

Novak Djokovic was pushed by Kwon Soon-woo in the opening two sets but came through relatively unscathed to advance at Wimbledon.

Javier Tebas has previously cast doubt on Barcelona's move for Robert Lewandowski, but now claims he hopes they can pull off the signing.

Juventus are said to be close to confirming the signing of Angel Di Maria, amid interest from Barcelona and Rosario Central.

Recently relegated Premier League side Watford had been due to face Qatar in a friendly next week, but the fixture has now been scrapped.

Andreas Christensen is expected to join Barcelona after departing Chelsea, but he says leaving the Blues was not an easy decision to make.