Two years after meeting in the 2020 Eastern Conference finals, the Boston Celtics are on a mission to flip the script on the Miami Heat.

In that 2020 series, which the Heat won 4-2 in 'the bubble' to advance to the NBA Finals, the Celtics were the higher seed, and were playing in their third Eastern Conference Finals in the space of four seasons.

But in hindsight, it was Miami who were built to win that series, despite it being their first time past the second round since LeBron James carried them to the finals in 2014.

Jimmy Butler was invigorated in his first year in Miami, in his physical prime at 30 years old and was determined to show he was not at fault for pushing his way out of the Minnesota Timberwolves and being traded from the Philadelphia 76ers in the space of a year.

He was also supported by Goran Dragic, just two years removed from his lone All-Star appearance, who in the series averaged 20.5 points and 4.7 assists per game in 34 minutes.

As well as having two strong initiators, the Heat also had a complete mismatch in the form of Bam Adebayo against a Celtics team starting Daniel Theis at center, with no competent back-up. Adebayo averaged 21.8 points while shooting over 60 per cent from the field, with 11 rebounds and five assists per game, and was clearly the most dominant player in the series.

When taking into account an outlier 37-point showing from Tyler Herro on 14-of-of-21 shooting that single-handedly won Game 4 112-109 for the Heat – making it a 3-1 series lead instead of 2-2 heading back to Boston – it begins to become clear that there was not much the Celtics could do, given their personnel.

Fast-forward a couple of years, 22-year-old Jayson Tatum is now 24 and in the midst of a rapid ascension into the game's best players, 23-year-old Jaylen Brown is now 25 and has developed into a true number-two option, Marcus Smart is now 28 years old and the NBA Defensive Player of the Year, and, more importantly, the supporting cast is built for the long-haul. 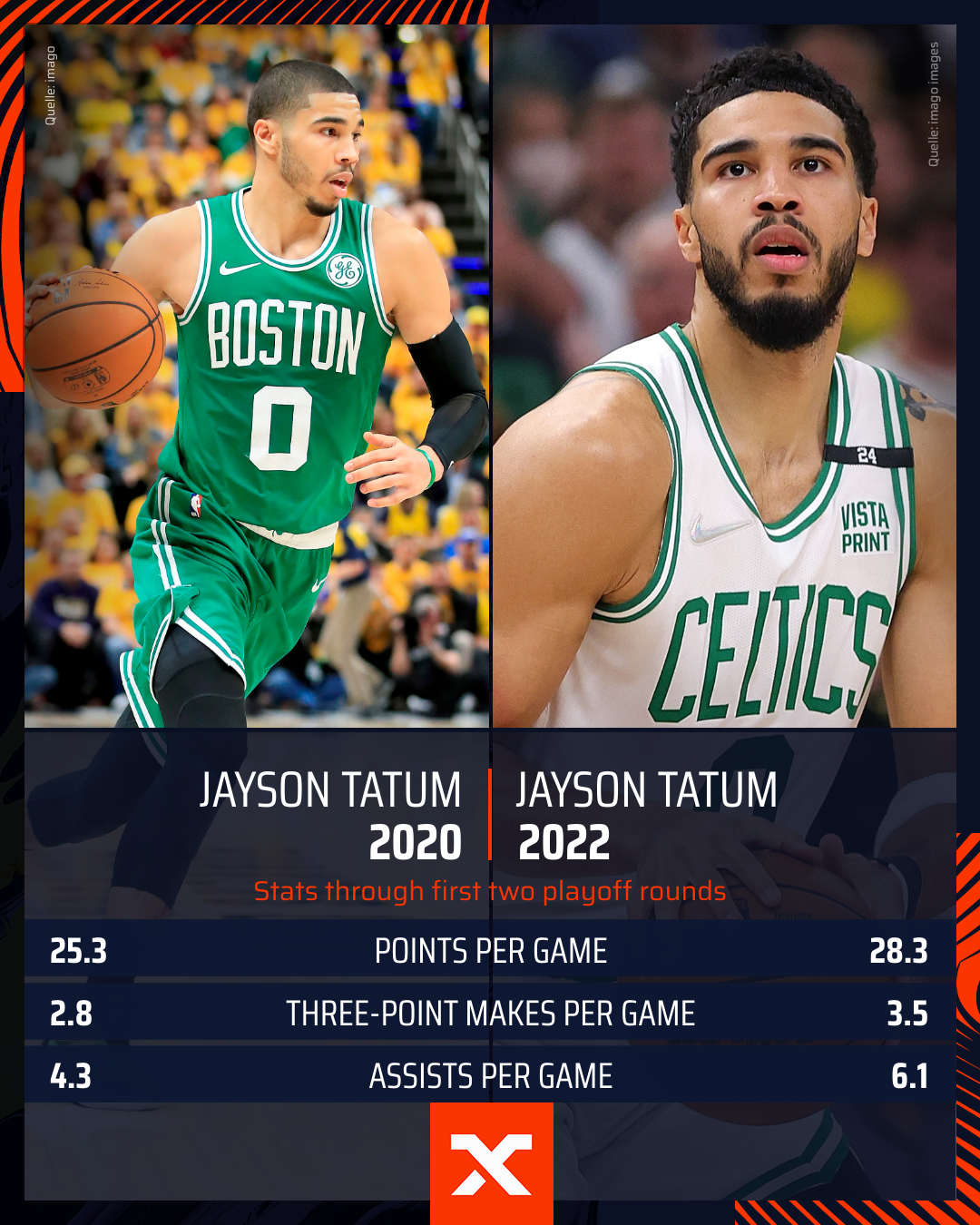 Replacing Theis with Al Horford may be the most consequential addition or subtraction on either side, with the potential to nullify the series-altering presence of Adebayo on the inside. Horford will also have help in the form of Robert Williams III – who became one of the best defensive players in the league this season – while Theis remains as a 'break glass in case of emergency' option.

Adding to the rise of the Celtics has been the emergence of Grant Williams as a reliable two-way player, capable of slowing down Giannis Antetokounmpo while hitting over 40 per cent of his threes, as well as the trade to add Derrick White as a second defensively sound 'small' guard next to Smart.

For a team with a real defensive identity – willing to 'switch' every screen and allow their small guards to take on bigger assignments – being able to replace Kemba Walker with a trustworthy, stout defender completely takes away an avenue of attack for a sharp offensive team like Miami.

What it also means is that the Celtics will not have to waste any minutes on players who have no business in big playoff series – such as Brad Wanamaker and Semi Ojeleye, who combined for 21.8 minutes per game in the 2020 series.

A run to the NBA Finals would be fulfilling the promises of Boston's advanced numbers, which after the All-Star break had the Celtics as not just a legitimate title contender, but as the favourite, and a historic team.

For the Heat, Dragic has been replaced by Kyle Lowry, who is now 36 years old and recovering from his second hamstring injury of the playoffs, and the veteran presences of Andre Iguodala and Jae Crowder have been replaced by a combination of Max Strus, Gabe Vincent and the shell of Victor Oladipo.

Erik Spoelstra boasts arguably the deepest bench in the entire NBA, but this is playoff basketball, which generally comes down to each side's best seven players, nullifying their advantage on the back-end of their roster.

The identity of this Miami offense through the playoffs has largely relied on the brilliance of Jimmy Butler, who at 32 years old is putting together the best playoff run of his career, averaging 28.7 points per game on 52.7 per cent shooting, with 7.6 rebounds, 5.4 assists and 2.1 steals. 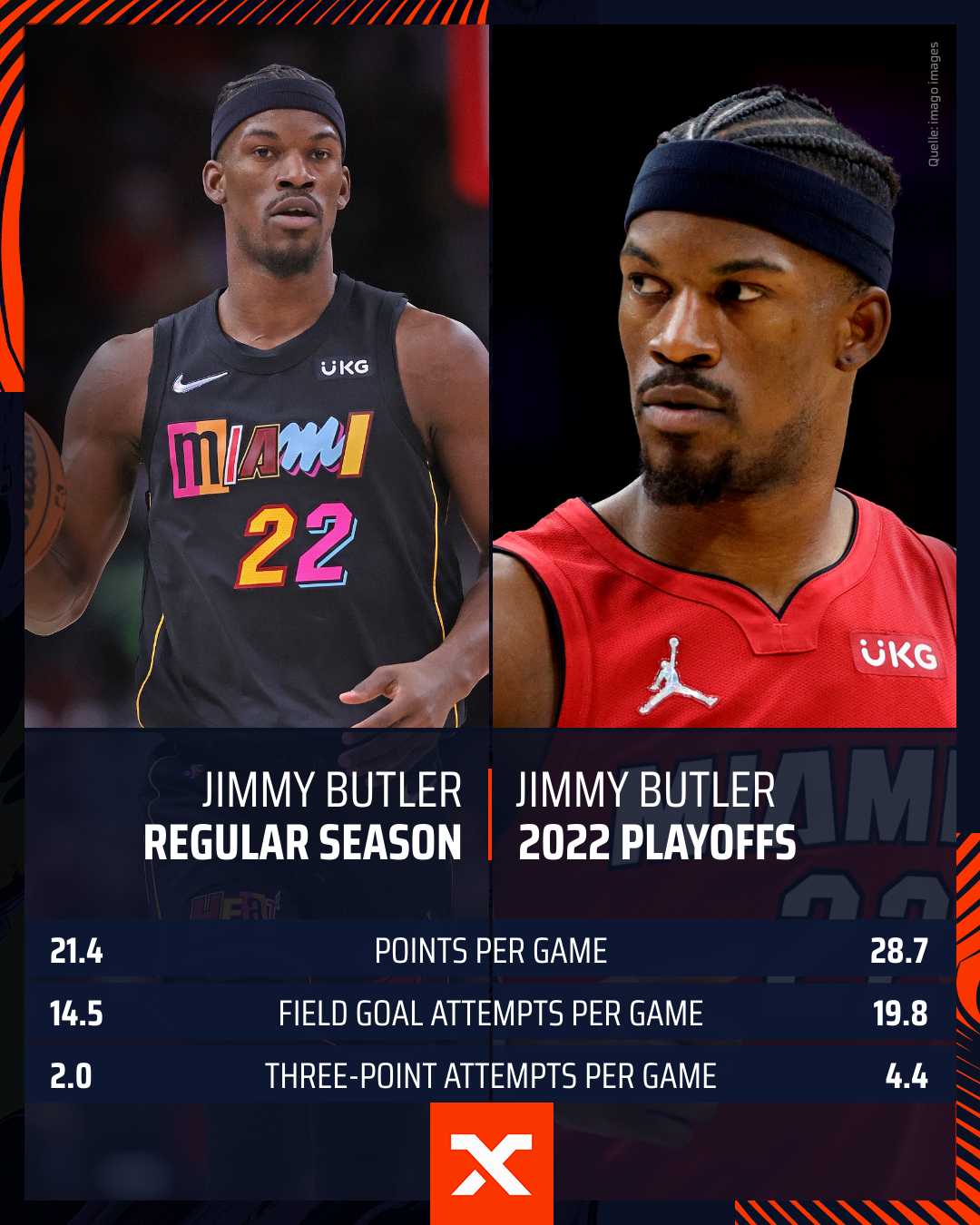 Miami's second-best scorer this postseason has been Adebayo, way down at 14.6 points per game compared to his 19.1 for the regular season.

Butler was perfectly matched up against the Philadelphia 76ers, who have no wing defenders capable of matching the Heat star physically – but the Celtics do not have the same problem.

The Celtics have at least four players – Tatum, Brown, G. Williams and R. Williams – who match up well with Butler, and they showed against the Milwaukee Bucks that they were more than happy to play straight-up defense and force one player to try and beat them with isolations all day.

If Miami cannot figure out a way to unleash a second scorer in a real way – be it Herro, Adebayo, or even Strus, who averaged 20.5 points in his two matchups against Boston this season – they may be playing straight into the Celtics hands.

The one advantage Miami will have is the rest-factor. It will be five days since the Heat's Game 6 win against the 76ers, while the Celtics will only have one true rest day after handling their business in Game 7 on Monday night.

For the regular season, the Heat won all three of their games with at least three days rest, although the Celtics were the fourth-best team in the NBA coming off one day of rest (28-13, .683 winning percentage).

If the Heat can take advantage of their fresh legs and win Game 1, anything could happen, but ultimately, just like the Celtics were almost helpless in 2020, the Heat just may not have the horses this time around.

Wimbledon: 'Phew! I am lucky!' – Djokovic relieved to get job done just before curfew

Tim van Rijthoven almost forced Novak Djokovic to return to the court on Monday, but the defending champion saw him off in time.

Ons Jabeur became the first African and Arab woman to win a WTA 1000 title in Madrid this year, and now Wimbledon glory is her target.

Verstappen: I felt like the car was falling apart

Max Verstappen suffered significant damage in the British Grand Prix that left him tumbling down the order at Silverstone.

Roy Nissany was found to have made an "unpredictable and unsafe" move after Formula Two race stewards assessed his scary Silverstone crash.

Trincao returns to Barcelona as Wolves opt against triggering option

After an unspectacular season at Wolves, Francisco Trincao is heading back to Barcelona.

Jannik Sinner triumphed over Carlos Alcaraz in what had been billed as a clash of two future grand slam winners in Wimbledon's last 16.

Poland has its first winner on the European Tour, and Adrian Meronk's success caught the attention of compatriot Jerzy Dudek.

India were under pressure on day three of the Edgbaston Test when Jonny Bairstow hit 106, but steadied themselves to build a strong lead.

'There was a lot going on, yeah?' – Carlos Sainz breaks his F1 duck with stunning Silverstone victory

Carlos Sainz finally won a Formula One race at the 150th time of asking as he prevailed after a thrilling finish to the British Grand Prix.