Ibrahimovic reveals Mbappe advice: 'If I were you, I'd go to Real Madrid'

After seven seasons in Ligue 1 with Monaco and Paris Saint-Germain, Zlatan Ibrahimovic would like to see Kylian Mbappe in a new league.

Zlatan Ibrahimovic has revealed he urged Kylian Mbappe to leave his comfort zone and join Real Madrid after being approached for advice by the Paris Saint-Germain forward.

Mbappe was the subject of two big-money bids from Madrid in the last transfer window and recently revealed he asked PSG to grant him a move away.

The France international is out of contract at the end of the season and continues to be linked with a free transfer to the Santiago Bernabeu.

He has spent five seasons with PSG, the first of those on an initial loan from fellow Ligue 1 side Monaco, whom he represented for two campaigns.

More than six years after bursting onto the scene, former PSG striker Ibrahimovic believes it is time for Mbappe to test himself in a new league.

"Only Kylian can answer you about where he has to go. It depends on what he wants, what he thinks," Ibrahimovic told L'Equipe.

"Me, I would have gone. But if I am PSG, I would try to keep him. It's him who will decide. PSG want to keep him, obviously, but does he want to stay?

"I also think that there are other clubs that want him: if you are a manager, and you have the means and you do not want to take Mbappe, you are in the wrong business.

"I had the chance to play in different teams, different countries, with different champions, and that's how I learned and grew.

"Playing at home all your career is easier, in my opinion. Whereas if you pack your bags and go to other places, it's an adventure."

Ibrahimovic himself spent four seasons with PSG and scored 156 goals, a tally bettered only by Edinson Cavani (200) in the club's list of all-time goalscorers.

Mbappe is fast closing in on Ibrahimovic in that regard as he has 151 goals in 198 appearances for the Parisians in all competitions since his debut in September 2017.

That is the fourth-most of any player from Europe's top five leagues across that period, behind Cristiano Ronaldo (158), Lionel Messi (168) and Robert Lewandowski (212). 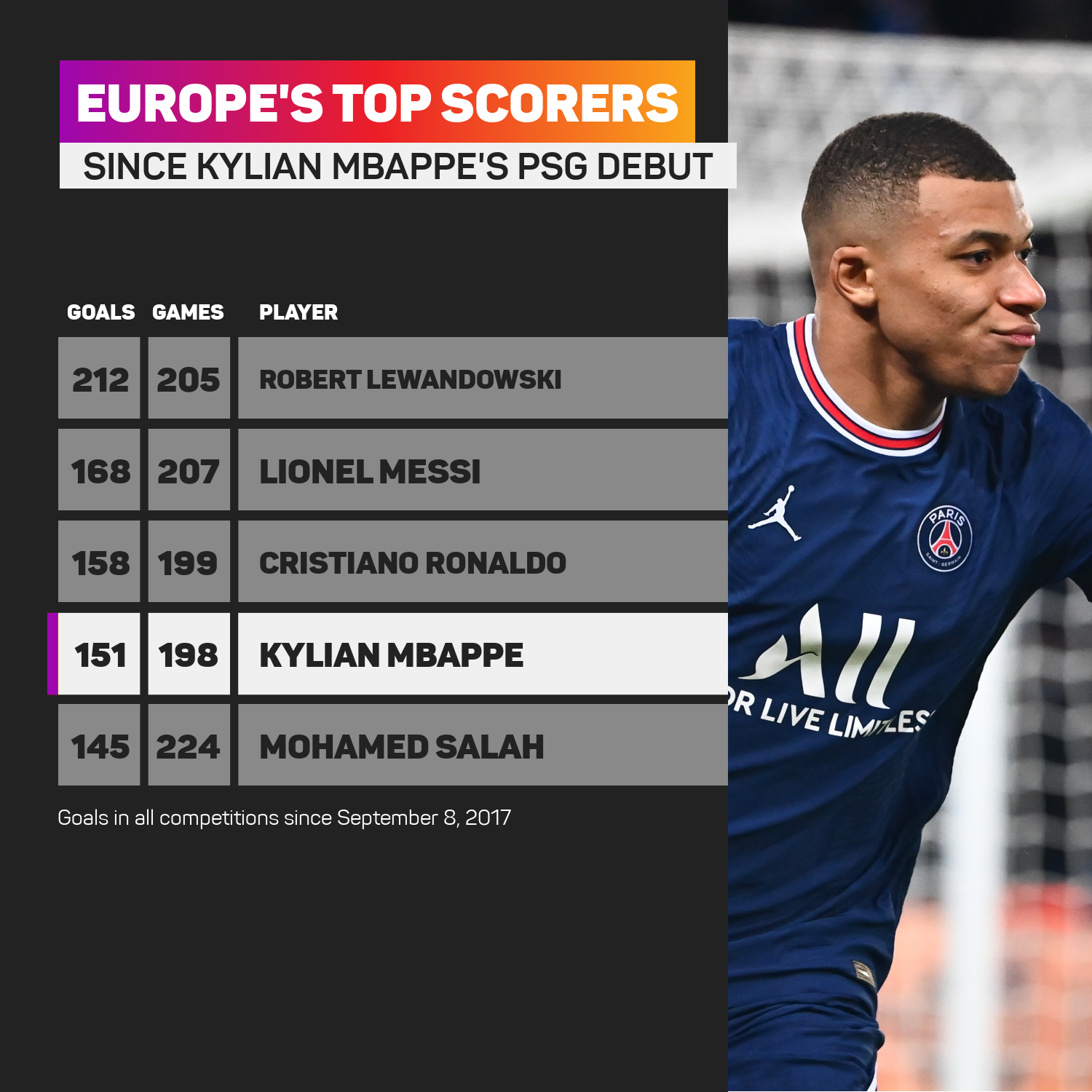 While Mbappe is a guaranteed starter for PSG when available, goalkeeper Gianluigi Donnarumma has struggled to hold down a place in the side since joining from Milan.

Donnarumma played a key part in Italy's Euro 2020 triumph and impressed across six years at San Siro, but he has had to share goalkeeping duties with Keylor Navas this term.

That has come as a shock to Milan striker Ibrahimovic, who spent two and a half years playing in the same side as the Italian stopper.

"I am very surprised. But I know it's not easy for the coach, and I know Navas is a great goalkeeper too," he said.

"They have two phenomena in goal. In my world, Donnarumma is the number one today.

"I don't know if it's good to alternate goalkeepers, or if it's more of a favour you do to one of them. I'm used to having a goalkeeper who is number one and is always the same.

"And about Donnarumma there is no question: he is the best in the world, and that's that. I played with him, I know what I'm talking about."