Japan's Naomi Osaka had her sights set on Olympic gold at Tokyo 2020, but the four-time grand slam winner suffered a third-round defeat.

Naomi Osaka saw her Tokyo 2020 gold medal hopes go up in smoke after a painful defeat and admitted: "This one sucks more than the others."

The world number two had seen top-ranked Ash Barty bounced out in the first round, and the face of Japan's Games looked primed for a run deep into the tournament.

But the prospects of home glory in women's tennis were dashed in round three when Osaka crumbled 6-1 6-4 to Marketa Vondrousova of the Czech Republic.

Osaka, who lit the Olympic cauldron in Friday's opening ceremony, was left scrambling for answers as to why she underperformed.

"How disappointed am I? I mean, I'm disappointed in every loss, but I feel like this one sucks more than the others," she said.

"I definitely feel like there was a lot of pressure for this. I think it's maybe because I haven't played in the Olympics before and for the first year [it] was a bit much."

Asked what went wrong against the world number 42, Osaka said: "Everything – if you watch the match then you would probably see. I feel like there's a lot of things that I counted on that I couldn't rely on today."

There were certainly mitigating circumstances that the 23-year-old might have pointed to, given she had not played since the French Open before heading into the Olympics.

Osaka pulled out of Roland Garros after winning through her first-round match, citing anxiety and pointing to episodes of depression as she explained why she refused to take part in news conferences during the tournament.

Her declarations in Paris came after the four grand slam tournaments warned she could be thrown out of their events if she persistently refused to talk to the media.

Already a four-time grand slam winner, Osaka has found plenty of public support and there was criticism of the tennis authorities for their stance. 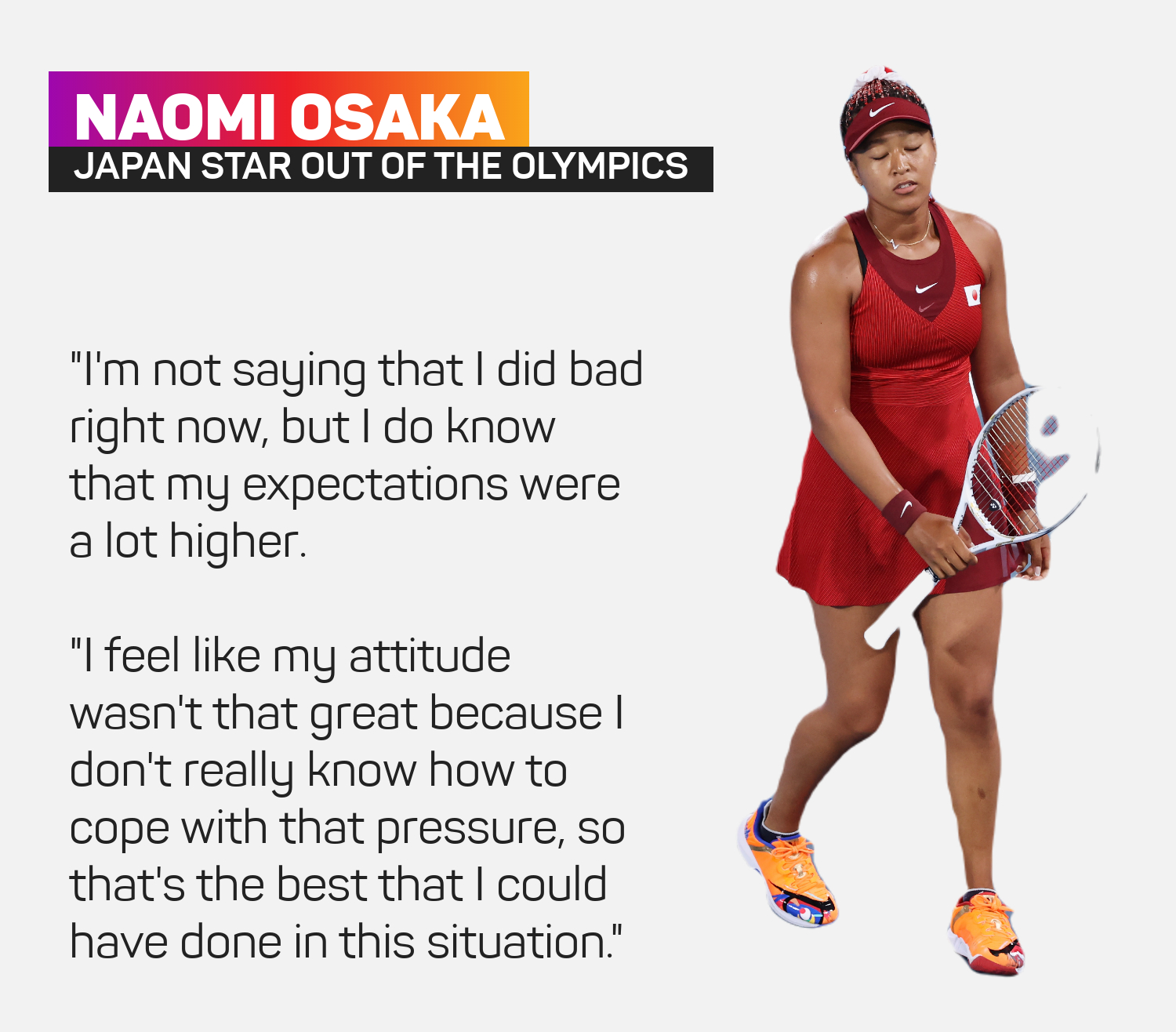 To many in Japan, she can do little wrong, although she could also do little right against Vondrousova. Osaka had 32 unforced errors to just 10 from Vondrousova, who also hit more winners.

After saving two match points, Osaka swung a backhand wide on a third to seal her exit.

Despite her disappointment, Osaka felt she had given a reasonable account following a recent absence from the tour, which saw her miss Wimbledon.

But the Games called for more than that, and it was a deflated Osaka who spoke afterwards, explaining how the pressure on her shoulders proved overbearing.

"I've taken long breaks before and I've managed to do well," she said. "I'm not saying that I did bad right now, but I do know that my expectations were a lot higher.

"I feel like my attitude wasn't that great because I don't really know how to cope with that pressure, so that's the best that I could have done in this situation."