Japan's Sena Irie hopes to have inspired women from the host nation to take up boxing after her historic Olympic exploits.

Sena Irie made boxing history for Japan and Kurt Walker produced a huge upset by ending Mirazizbek Mirzakhalilov's bid to win gold at the Tokyo Olympics on Wednesday.

Featherweight Irie became the first woman to win an Olympic boxing medal with a points victory over Maria Claudia Nechita at the Kokugikan Arena in her homeland.

Irish featherweight Walker eliminated world champion and top seed Mirzakhalilov of Uzbekistan in the round of 16, claiming a split decision.

We take a look at the pick of the action in the ring.

The 20-year-old Irie will win at least a bronze medal after her defeat of Nechita and faces Team GB's Karriss Artingstall, who edged out Skye Nicolson of Australia, at the semi-final stage.

Irie hopes her exploits will inspire Japanese women to pick boxing over judo.

"Judo is a much more famous sport in Japan so I hope this makes boxing a lot more famous and inspires more Japanese women to take it up," she said.

"I've shown other women who might not be good at sport that you can achieve something if you work hard.

"This medal is the result of 13 years' hard work. I've made history but it is still just a little contribution. I want to do more. Winning gold would be so much bigger." 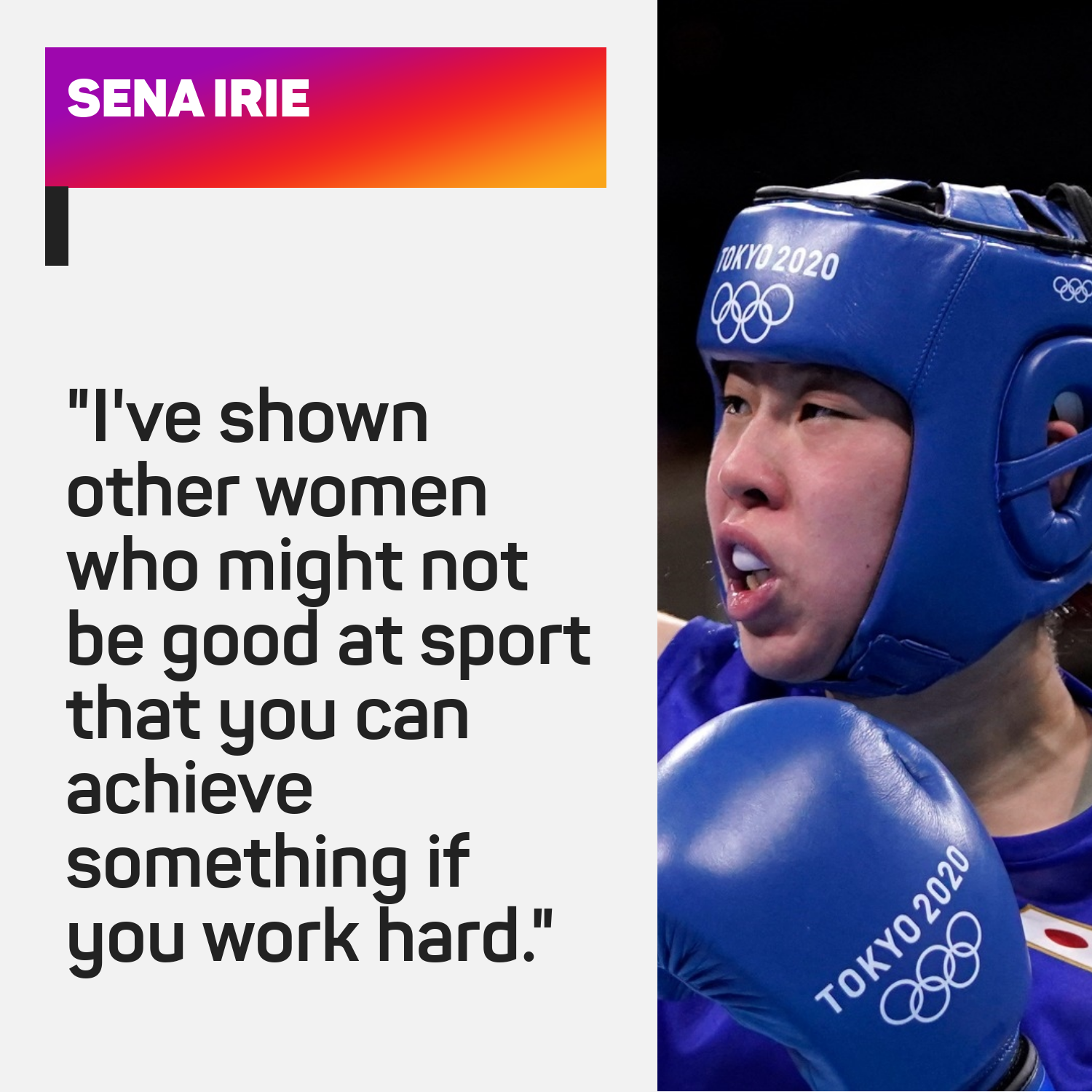 Walker produced the performance of his career to eliminate Mirzakhalilov.

Mirzakhalilov was strongly fancied to take gold, but Walker had other ideas as he pulled off a shock victory.

The 26-year-old said: "I'm over the moon. I really can't explain it, but I worked on it and I knew it was going to happen. I believed. I knew. I'm not surprised.

"It's just brilliant. I never would have thought it before I came, it's a fairytale. But there is still more work for me to do. I need to recover, go back and get more tactics and hopefully get a medal."

Asked how he ranks the win, he said: "The best I'd say. I beat the current world champion, the number one seed, in the Olympics Games, the biggest stage of the lot."

Duke Ragan will be Walker's quarter-final opponent on Sunday after the American dominated Serik Temirzhanov of Kazakhstan.

FONTIJN: PRICE NOT IN MY HEAD

Nouchka Fontijn and top seed Lauren Price could be on a middleweight semi-final collision course after securing midweek victories.

Fontijn of the Netherlands beat Pole Elzbieta Wojcik in the first round, while Price got her quest for Olympic glory by dominating Mongolia's Myagmarjargal Munkhbat.

Dutch boxer Nouchka thought she had won the world title in 2019, but Price took the title in Russia after the British team launched a successful appeal.

The two will meet it again if they come through their quarter-final bouts this weekend and Fontijn says Price is not in her head.

"I’m not busy with Lauren Price any more than other opponents," said the Rio 2016 silver medallist. "Some people think I need revenge and that she's always in my head and that's not true. I am just working towards my next fight and we'll see what happens then.

"I've already got the silver, and gold would be perfect in my collection. But every Olympic Games is another chapter and it’s been five years since Rio. There's a whole new squad of opponents, so it’s a different story."

Mercedes head to Russia excited for run-in despite Hamilton drought

Mercedes have work to do over the final stretch of the Formula One season, but Toto Wolff believes they are up for the fight.

Juventus registered a win at the fifth time of asking in Serie A this season, but they were given a real fright by a spirited Spezia side.

Capitals return to top of IPL with emphatic win over Sunrisers

Shreyas Iyer was in the runs in his 150th IPL game, and his first of the 2021 edition, as Delhi Capitals return to the summit.

James Rodriguez's time in the Premier League is over, with the Colombian departing Everton after one season at Goodison Park.

Marlon Samuels has a fortnight to respond to four charges in relation to his participation in the T10 League in Abu Dhabi two years ago.

Rooney's Derby County to have 12-point deduction after entering administration

Simona Halep went to the top of the WTA rankings and won a grand slam under Darren Cahill, but has now split with the coach.

Ronald Koeman is under pressure and acknowledged Barcelona's problems have been exacerbated by Lionel Messi's departure.

Under pressure Barcelona coach Ronald Koeman read from a prepared statement and did not answer any questions in Wednesday's news conference.