The Phoenix Suns soared to a 115-105 victory as LeBron James and the Los Angeles Lakers were condemned to back-to-back defeats to start the 2021-22 NBA season.

Chris Paul fuelled the Suns with 23 points and 14 rebounds in Los Angeles, where the Lakers were no match for last season's NBA Finals participants and fell to 0-2.

Devin Booker (22 points) and Mikal Bridges (21 points) also impressed for the Suns, while double-doubles from Anthony Davis (22 points and 14 rebounds) and Russell Westbrook (15 points and 11 rebounds) were not enough for the Lakers.

James finished with 25 points in front of the likes of Floyd Mayweather Jr. and Justin Bieber at Staples Center.

The Lakers' woes were compounded by a row between team-mates Davis and Dwight Howard on the bench during the second quarter as the pair had to be separated. 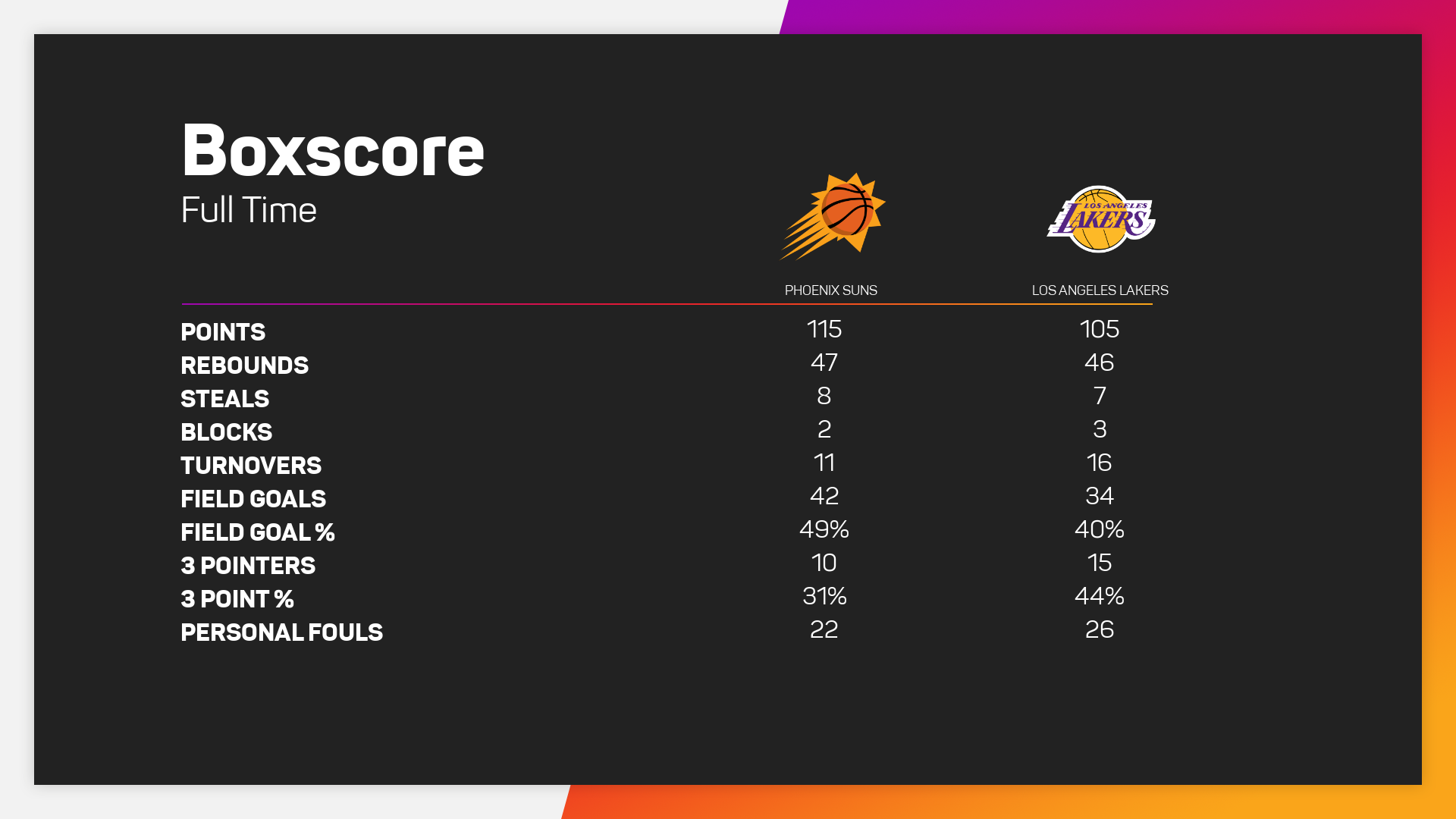 The Philadelphia 76ers looked in control and on track for victory but they were upstaged 114-109 by Eastern Conference rivals the Brooklyn Nets. Kevin Durant posted a triple-double of 29 points, 15 rebounds and 12 assists as the Nets used a 16-1 run to stun the 76ers in their first home game of the season in Philadelphia. James Harden had 20 points, while LaMarcus Aldridge added 23 points off the bench on 10-of-12 shooting. Seth Curry made all four of this three-pointers to finish with 23 points, the same amount as 76ers team-mate Tobias Harris.

Reigning MVP Nikola Jokic showed why he was crowned the league's best player last season, scoring 32 points, collecting 16 rebounds and supplying seven assists in a 102-96 win against the San Antonio Spurs. It was his eighth 30/15/5 game, doubling the rest of the Nuggets franchise history combined.

The Chicago Bulls' new-look team improved to 2-0 thanks to a 128-112 triumph over the New Orleans Pelicans. Lonzo Ball inspired the win behind his triple-double (17 points, 10 assists and 10 rebounds), while Zach LaVine (32 points) and DeMar DeRozan (26 points) also came up big.

The Utah Jazz stayed unbeaten courtesy of dominant displays from All-Star duo Donovan Mitchell (27 points) and Rudy Gobert (17 points and 20 assists) in the 110-101 road win at the Sacramento Kings.

Myles turner joined James, Harden, Durant, DeMarcus Cousins, Vince Carter and Tracy McGrady as the only players in NBA history to score 40 points, 10 rebounds, five three-pointers and three blocks in a game. The Indiana Pacers still lost 135-134 to the Washington Wizards in overtime.

The Boston Celtics were booed off the court at half-time and throughout the second half in their 115-83 defeat against the Toronto Raptors. Jaylen Brown was three-for-13 shooting for nine points and five turnovers, while Marcus Smart ended the game scoreless on 0-for-six shooting in 29 minutes as the Celtics fell to 0-2.

Liverpool cruised past Everton on Wednesday to remain in the hunt for top spot in the Premier League as Mohamed Salah once again dominated.

Real Madrid were second best against Athletic Bilbao but managed to secure maximum points, to the delight of boss Carlo Ancelotti.

Lillard out for 10 days with abdominal injury

The Portland Trail Blazers will be without Damian Lillard for 10 days after he was diagnosed with lower abdominal tendinopathy.

Ibrahimovic ready to re-sign with Milan: I'm having fun and feel young

Zlatan Ibrahimovic scored as Milan beat Genoa 3-0 and the 40-year-old revealed he wants to sign a contract extension.

Guardiola hails Silva as a class above after 150th win

Manchester City found a way past Steven Gerrard's Aston Villa as they remained in the hunt for top spot in the league.

Chelsea were far from their best during their win at Watford, with Thomas Tuchel admitting they were lucky to take all three points.

Manchester City continued in pursuit of top spot in the Premier League with a win over Aston Villa, Bernardo Silva scoring a stunning goal.

Liverpool remain hot on Manchester City and Chelsea's heels after earning a 4-1 win over Everton in Wednesday's Merseyside derby.