Giannis Antetokounmpo and Kevin Durant headline a mouthwatering season opener, but Kyrie Irving will be conspicuous by his absence.

The Milwaukee Bucks will raise their 2021 title banner and receive their championship rings on Tuesday, just before a season opener against a Brooklyn Nets team missing a star player they hoped would deliver silverware to their franchise.

It was an engrossing series in which Milwaukee prevailed largely due to their superior health, the Nets' cause hindered by injury struggles for James Harden and Kyrie Irving.

And they will again be minus Irving for the season opener in Wisconsin, though for a markedly different reason.

Irving's refusal to receive a coronavirus vaccine, and the fluctuations in his ability that would cause with mandates in major cities preventing unvaccinated individuals from entering public spaces, led the Nets to decide he will not play for the team until the issue is resolved.

As a result, much of the burden will again fall on Kevin Durant, though he will at least have the assistance of Harden, as the Nets aim to get a measure of revenge on Giannis Antetokounmpo and the Bucks.

Even with Irving out of the picture, the Nets look set to contend with the Bucks for superiority in the East, and this encounter may provide an early indication of which team has the upper hand in 2021-22.

While Antetokounmpo is the man around whom everything revolves for the Bucks, he receives substantial support from Khris Middleton and Jrue Holiday.

It is the latter who is the chief facilitator for Milwaukee. Holiday's 10.5 assists per 48 minutes last postseason ranked fifth among players to play in at least 10 playoff games.

The Bucks will look for him to have a similar influence on their title defence, starting with the visit of the Nets.

Harden was in the MVP conversation last season until a hamstring issue derailed his campaign.

His one full regular-season appearance against the Bucks saw him post a double-double with 34 points and 12 assists.

With Irving unavailable, getting that kind of performance from Harden would be critical to the Nets' hopes of opening the season on a high. 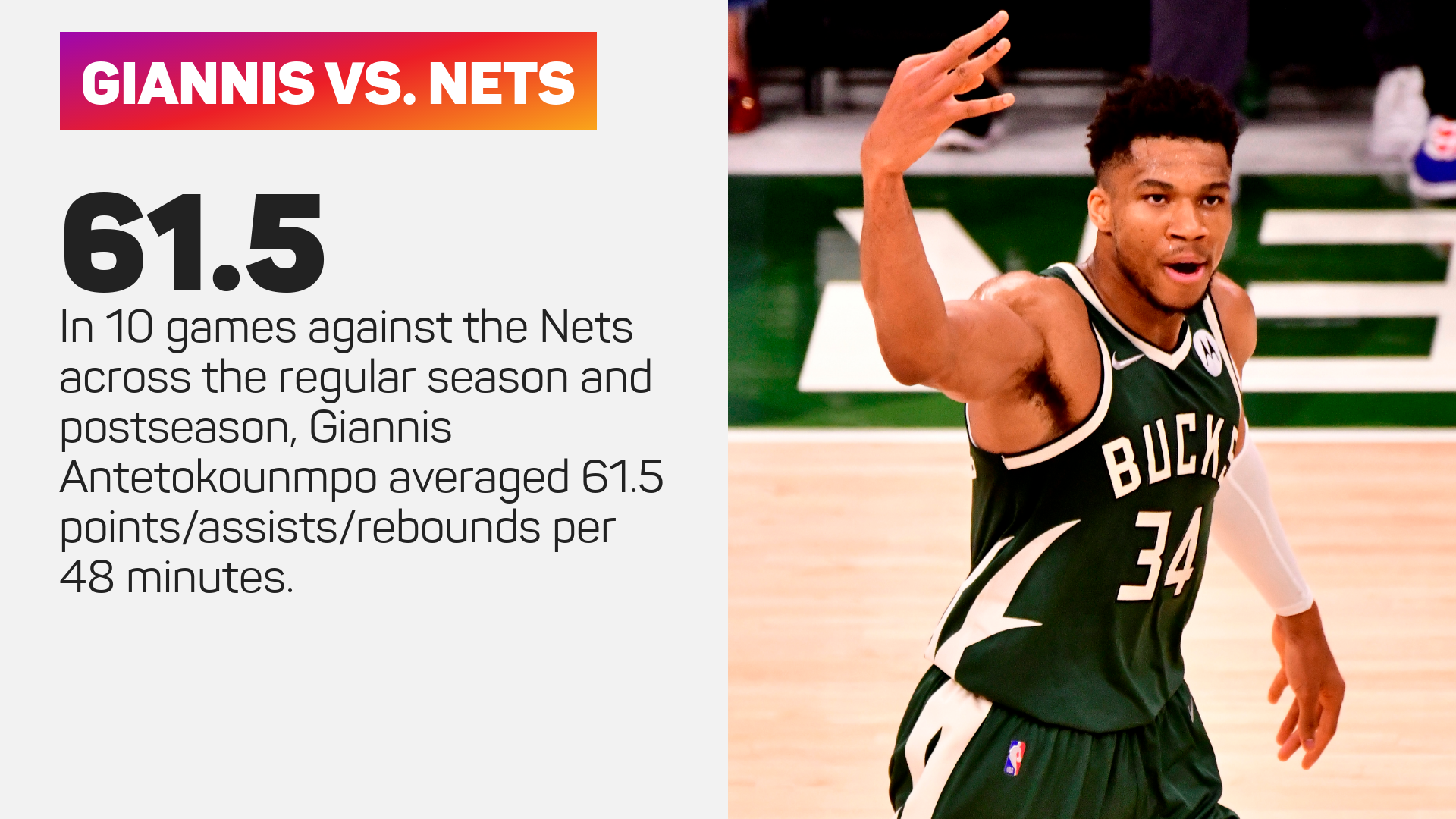 Though both teams have plenty of depth at their disposal, the unquestioned headline act of the season opener will be the heavyweight matchup between Antetokounmpo and Durant.

Last season, the All-Star duo definitely brought out the best in each other.

In 10 games against the Nets across the regular season and postseason, Antetokounmpo only once scored fewer than 30 points. He averaged 61.5 points/assists/rebounds per 48 minutes and had an effective field goal percentage of 57.9.

In three of those games, Durant went over 40 points, with the two-time Finals MVP averaging 58.5 points/assists/rebounds per 48 minutes and posting an effective field goal percentage of 55.6.

However, Durant's plus-minus across all meetings with the Bucks was minus 18 compared to plus 26 for Antetokounmpo, perhaps speaking to his lack of support in the postseason.

With Harden in his corner for this contest, Durant will hope to flip the script in that regard and spoil the Bucks' celebration.

The Bucks will be confident they have the edge after their postseason defeat of the Nets and also won each of their home games against Brooklyn last season. A momentous night of celebration for Milwaukee is not the time to let their advantage slip.

Belenenses SAD could only field nine players, two of whom were goalkeepers, for Saturday's match with Benfica.

Nagelsmann relishing Dortmund clash as Bayern warm up for Klassiker

Bayern Munich earned a narrow win over Arminia Bielefeld in the Bundesliga thanks to Leroy Sane's strike, and next is a clash with Dortmund.

Deyverson came on to score in extra time as Palmeiras became the first team in 20 years to win back-to-back Copa Libertadores titles.

Memphis Depay and Philippe Coutinho scored late on as Barcelona earned a 3-1 win at Villarreal on Saturday.

Hakan Calhanoglu and Lautaro Martinez got Inter's goals as the Serie A champions beat promoted Venezia in Venice on Saturday.

'Juventus must be realistic' – Allegri rules out Scudetto challenge

Juventus suffered a fifth league defeat of the season on Saturday, and Massimiliano Allegri believes a title challenge is impossible.

Jurgen Klopp enjoyed Liverpool's attacking but picked holes in their defensive work after Southampton suffered a heavy defeat at Anfield.

Juventus' slim hopes of being involved in the Serie A title race continue to fade, with Duvan Zapata condemning them to defeat in Turin.

Diogo Jota enjoyed being the man on the end of scintillating build-up play as he scored twice for Liverpool against Southampton.