Barcelona director of football Mateu Alemany has informed Ousmane Dembele to "leave the club immediately" after repeatedly turning down the offer of a new contract.

The Catalan giants have been in talks with the France international since July over extending his existing deal, which runs out at the end of this season.

Dembele has struggled to establish himself as a key player at Camp Nou since joining from Borussia Dortmund in 2017 for an initial €105million due to persistent injury setbacks.

Barca head coach Xavi recently insisted Dembele could become the "best in the world" in his position as he underlined his desire for the forward to agree fresh terms.

However, the 24-year-old's agent Moussa Sissoko this week told RMC Sport that he would not bow to "pressure" from Barca over his client's future.

Sissoko also accused the club of making "threats of no longer playing in the side" rather than engaging in productive talks with Dembele.

That led to Xavi issuing an ultimatum on Wednesday when telling the former Dortmund attacker to either agree to the offer on the table or be sold in the January window.

And after he was left out of Barcelona's squad for Thursday's Copa del Rey last-16 tie with Athletic Bilbao, Alemany revealed time has now run out for Dembele.

"With Ousmane and his agents we started conversations around the month of July," Alemany told Barca TV.

"In all this time, almost seven months, we have talked, Barca has made different offers, we have tried to find a way for the player to continue with us.

"Those offers have been continuously rejected by his agents. It seems obvious that the player does not want to continue at Barcelona and is not committed to our future project.

"We told him and his agents that he must leave the club immediately because we want to have players committed to the project.

"We expect a transfer to take place before January 31. The sporting consequence is that we don't want to have players who don't want to be at Barca.

"The fact that he was not in the [squad] list for today is the consequence of this whole process. The coach has our full support, it's a consistent attitude." 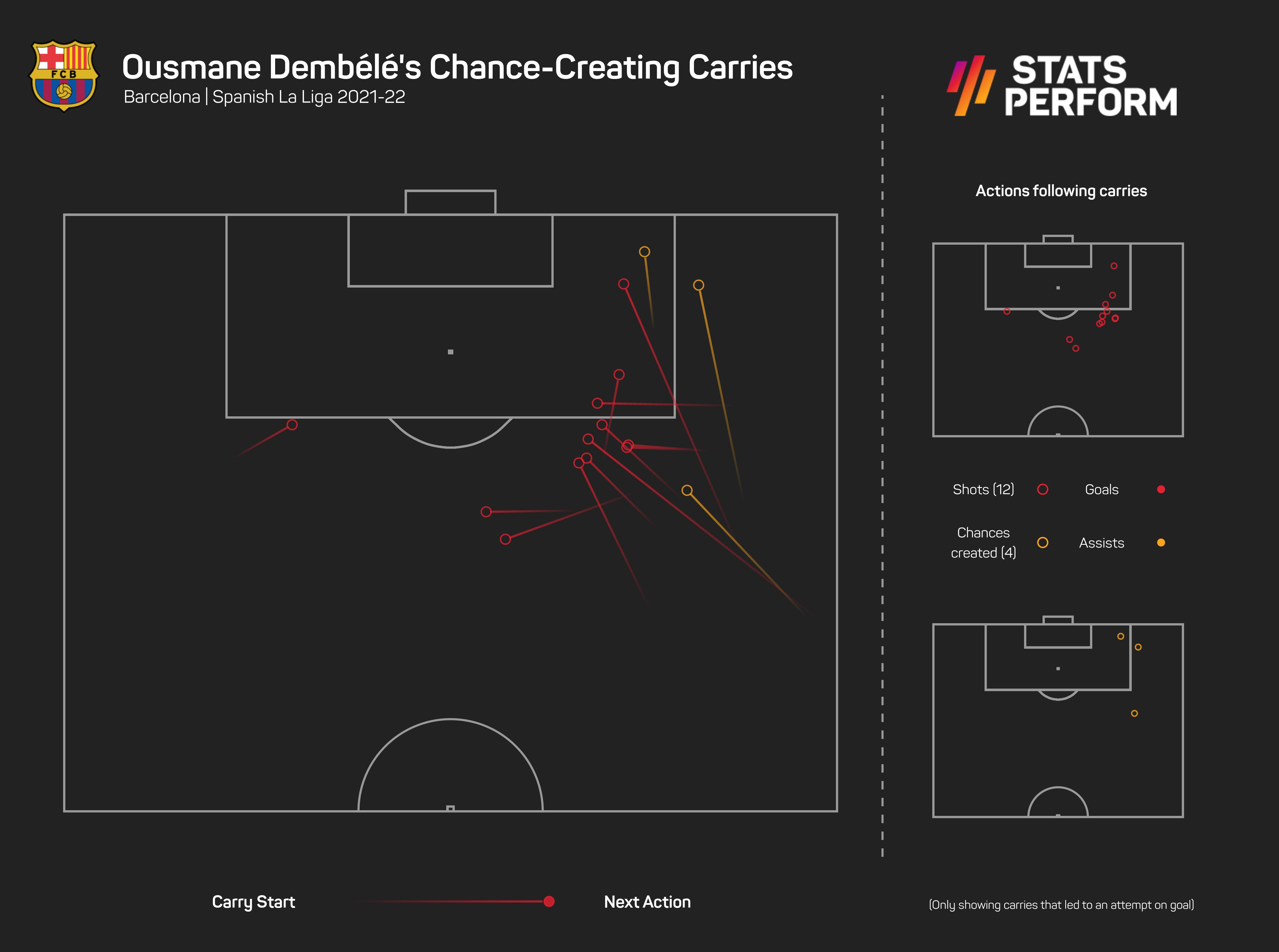 Dembele has played just six times in LaLiga this season and in just over half of Barca's league games since his arrival four-and-a-half years ago.

He has managed 31 goals and 22 assists in 129 appearances since his debut in September 2017, meaning he has been directly involved in 0.63 goals per 90 minutes.

That puts him on a par with compatriots Kingsley Coman and Anthony Martial among players from Europe's top five leagues, and just behind Liverpool star Sadio Mane (0.64).

His goal tally has also come from an expected goals (xG) of 23.7, suggesting Dembele's finishing has been of a high standard, given the quality of chances that have come his way.

However, to put Dembele's injury issues into some context, the 129 games he has played for Barca is 91 fewer than team-mate Sergio Busquets over the same period.

Dembele has reportedly drawn interest from a host of Premier League sides, including newly-rich Newcastle United, as well as Paris Saint-Germain, Juventus and Bayern Munich.