It did not end as they might have hoped, but the 2020-21 NBA season was undoubtedly one to remember for the New York Knicks.

Playoff basketball returned to Madison Square Garden for the first time in eight years, even if a typically passionate crowd could not carry their team beyond the first round. The subsequent show of strength from the Atlanta Hawks – the fifth seeds behind the Knicks – should cast a 4-1 series defeat in a slightly different light, though.

And New York's progress under Coach of the Year Tom Thibodeau, led by Most Improved Player Julius Randle, can only encourage optimism. The 25.1 improvement in win percentage from the previous campaign (31.8 to 56.9) was the largest in the franchise's history.

But Thibodeau and the front office have work to do this offseason if they are to ensure the Knicks do not fall short when it really matters again next year.

Time to assess the franchise's situation with the campaign now over...

Well established as a leading defensive coach in the NBA, it came as little surprise that Thibodeau's influence was most clearly seen on that end of the floor. The Knicks had given up 112.3 points per game in 2019-20, ranking 18th in scoring defense. That improved to a league-best 104.7 last season. 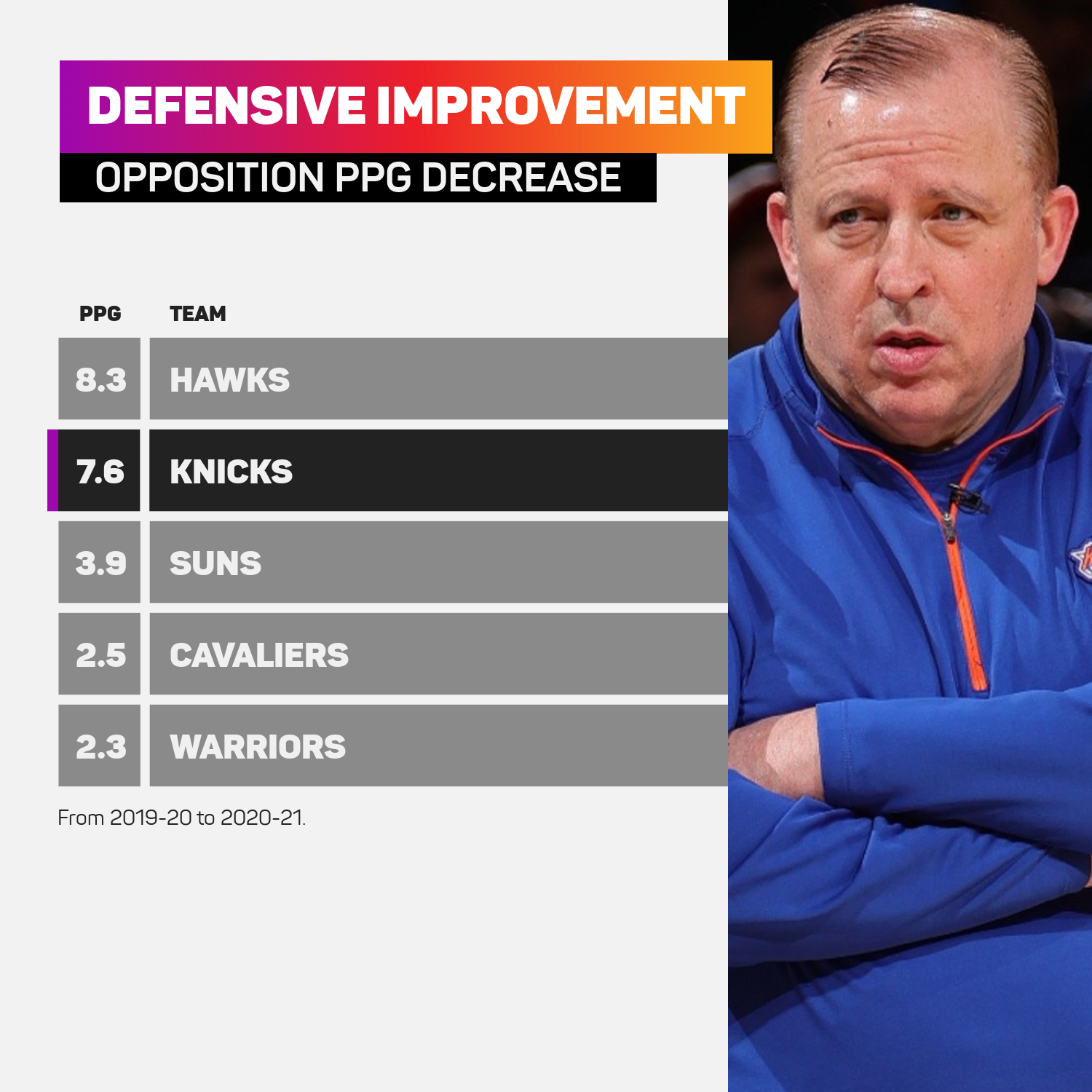 On offense, though, Randle's ascension to All-Star selection and the fringes of the MVP debate made all the difference. The former Kentucky forward joined New York for the 2019-20 season and contributed 19.5 points per game – his total of 1,248 making up a team-high 17.9 per cent of the Knicks' points. Marcus Morris Sr (12.0 per cent) was the next most influential Knick despite leaving for the Los Angeles Clippers after 43 games.

Pessimism at that stage was understandable. Randle had also scored the most points on his previous teams across the prior two years – the pre-LeBron James Los Angeles Lakers and a New Orleans Pelicans outfit Anthony Davis decided was not worth sticking around for – and neither of those came close to making the playoffs. It was a miserable trend that seemed certain to continue.

However, Randle was determined not to let that happen and put in the work to improve his game heading into the new season, focusing particularly on his three-point shooting. "Obviously, the big thing was the three," Thibodeau said in May. "It stood out right away during the summer, but you're in the gym where there's no defenders. It looked a lot better coming off his hand, the arc was better, and he looked real comfortable with it." The Knicks' leading scorer went from shooting 27.7 per cent from three the previous year to 41.1.

Randle's free-throw percentage also improved by nearly eight points to 81.1 per cent. "I thought he would have a good year, but I didn't see this level," his coach added.

While Randle's increased output (24.1 points per game) saw him supply 22.2 per cent of his team's points – ranking sixth in the league in that sense – and his usage rate rose to 29.3 per cent, he also provoked better performances from his team-mates.

"That was a big concern, the three-point shooting for our team," said Thibodeau. "Not only for Julius, but that was huge for him and our team. All the other guys put in the extra time as well. Julius set the tone for that. You see him work on it every day. He's in early, he stays late. He comes back at night, and we have a number of guys that do that. If you put the time into it, usually you’ll get a good result."

No team improved their accuracy from beyond the arc as dramatically as the Knicks, up from 33.7 to 39.2 per cent.

With increased options around him – including RJ Barrett shooting 44.1 per cent from the field and 40.1 per cent from three in his second year – Randle also had a career-high 6.0 assists per game. Of his 427 assists, 115 were for Barrett and 117 for Reggie Bullock. Considering he was assisted by Barrett on 68 occasions and then a further 55 from Elfrid Payton, Randle was involved in the Knicks' four most common assist-scorer combinations.

Following a narrow late-season defeat to the Lakers, Davis said of his former Pelicans team-mate: "I think he's an MVP candidate, he for sure should win Most Improved, what he's doing, got this team in the playoffs right now for a team who hadn't been in the playoffs for a while. He's playing his a** off and you can do nothing but respect him."

Of course, this reliance on Randle is all well and good so long as the former seventh overall pick is delivering. Worryingly, though, a debut postseason series prompted an apparent regression to the mean – or worse.

Although that three-point practice kept his shooting from dipping below 33.3 per cent from beyond the arc, Randle slumped to an alarming career low from the midrange, a miserable 14.7 per cent. He was also 44.4 per cent at the rim as the Knicks struggled to get points in the paint – Hawks center Clint Capela averaged a double-double for the series, his 13.4 rebounds including 10.4 on the defensive end – and ended up with just 18.0 points per game in 36.0 minutes, even as the usage rate ramped up even further to 31.8 per cent.

No team can afford for their superstar to go missing in the playoffs. Randle had posted 28, 44 and 40 in three wins over the Hawks in the regular season, but he was swiftly stifled in round one. Meanwhile, Trae Young, revelling in the role of villain in New York, established himself as one of the league's most exciting scorers.

Young's 29.2 points against the Knicks set the standard for his postseason as a whole, the Hawks beating the Philadelphia 76ers and only losing to the Milwaukee Bucks after their point guard was injured, having repeatedly risen to the occasion. The contrast with Randle was stark. 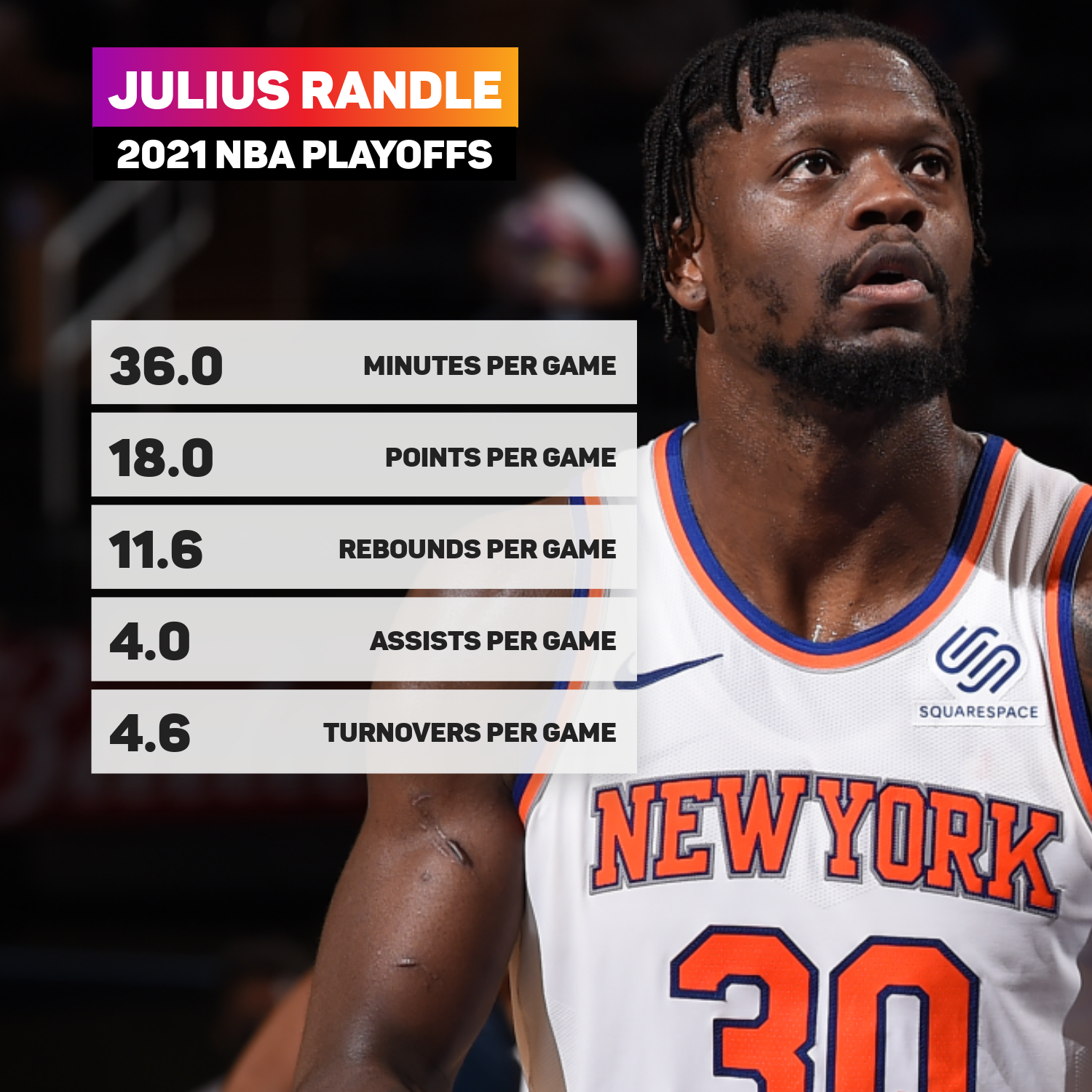 Randle had entered the playoffs all but certain to be the subject of a hefty contract offer from the Knicks one year out from unrestricted free agency. Now, that deal is not quite so secure, with the team perhaps pondering their options.

As in 2020-21, when Thibodeau and the front office chose not to gamble, the Knicks are set to have the most cap space in the NBA, projected at $51.3million. With money to spend in a big market, New York will – yet again – be the subject of speculation involving the league's top free agents heading into the new season, especially if a Randle deal is delayed.

This is a somewhat underwhelming free agency class, though, with two notable exceptions. Kawhi Leonard and Chris Paul both have player options – the latter an interesting name given the Knicks' issues at point guard.

Thibodeau finally lost patience with Payton after 13 playoff minutes, one point and one assist, while Frank Ntilikina appeared fleetingly in three games. That meant Derrick Rose starting at the point; although he led the team with 19.4 points per game in the postseason, they lost all three of his starts and badly missed his consistent contributions from the bench. The trio are all on expiring contracts and only Rose is likely to be retained. It is a position that must be reinforced.

Despite their repeated attempts to strike a blockbuster deal, a move for Paul or similar would represent a step into the unknown. The Knicks are far more familiar with blooding draft picks and will hope Barrett (2019), Immanuel Quickley and Obi Toppin (both 2020) will be boosted by getting a taste of the playoffs, albeit if the experience was brief.

Ideally, third-year center Mitchell Robinson would also have had that opportunity. He has the best career field-goal percentage on record among NBA players with 400 or more attempts all-time (70.5) but fractured his right hand in February and his right foot in March.

The free agency rumour mill might continue to churn, but Knicks fans have this year at least been spared the pain of sitting through another draft lottery.

While not be able to take Cade Cunningham, just as they were not able to select Zion Williamson in 2019, this time that is due to their own on-court achievements, rather than the luck of the draw. Two first-round picks – 19 and 21 – should still see New York able to bolster their roster.

Why would the Knicks do anything but build on the foundations of a popular, hard-working, fast-improving team? Whether Randle signs or not, whether a player like Paul can be tempted to MSG or otherwise, the bulk of this roster will remain the same. They have enough room under the cap to bring back a number of key pieces regardless of any expensive, eye-catching additional business.

A new man running point would allow Rose to return to leading the second unit. Another way to add scoring depth might see the arrival of a wing who can compete for minutes with Bullock, whose accuracy from the field, three-point range and the foul line tailed off in the postseason.

Up the middle, despite the team's struggles against Capela and Co, Robinson remains under a team option and both Nerlens Noel ($6m last year) and Taj Gibson ($1.7m) should be cheap and useful enough to return. In 1,547 regular season minutes, Noel had the third-best block percentage (8.7) and 23rd-best steal percentage (2.3) in the league.

New York may still be some way off contention, but this must be a patient process. Another playoff campaign should be regarded as a success, particularly if they can be more competitive. That will require tweaks, not a drastic overhaul.

Rio Ferdinand suggested Ole Gunnar Solskjaer should have told Cristiano Ronaldo to back off from the touchline against Young Boys.

Lens general manager Arnaud Pouille said the authorities would decide the next course of action after trouble against Lille.

Guardiola: Failure to sign a striker not the reason for Saints stalemate

Manchester City boss Pep Guardiola says a goalless draw with Southampton was not down to a lack of attacking additions.

Sadio Mane reached 100 goals for Liverpool on Saturday, but Jurgen Klopp wanted to highlight the other qualities he brings to the Reds.

Clara Tauson is the last player to have beaten Emma Raducanu, and the Danish teenager has showed her quality in Luxembourg.

Inter moved top of Serie A as they thrashed Bologna to continue their unbeaten start to the new Italian top-flight campaign.

Referee Jesus Gil Manzano incurred the wrath of Atletico Madrid during their 0-0 draw with Athletic Bilbao.

Francesco Bagnaia and Fabio Quartararo could be set for a thrilling battle in the San Marino Grand Prix, where eyes are on the skies.