Tokyo Olympics Recap: Jacobs becomes 100m king on memorable day for Italy, McKeon and Dressel go out on a high

Marcell Jacobs is the new men's 100m sprint king and it was another memorable day in the pool for Emma McKeon and Caeleb Dressel.

Jacobs, the first Italian to even reach the final, broke the European record with a time of 9.80 seconds to finish ahead of Fred Kerley and Andre De Grasse.

There was nothing to separate the pair after two hours of competition and, with both men tied on 2.37m, they agreed to share first place rather than have a jump-off.

Italy winning two athletics gold medals at the same Olympics for the first time since Athens 2004 was the story of the day, but there were plenty more talking points on Sunday.

PAN GETS BRONZE AFTER EPIC PLAY-OFF

Xander Schauffele landed Olympic gold for the United States on the golf course on a nail-biting final round of action that saw Rory Sabbatini take silver with an Olympic record 10-under round of 61.

That was just half the story, though. Seven players finished in a tie for third, setting up a thrilling play-off that culminated in Chinese Taipei's CT Pan pipping Open champion Collin Morikawa to an unlikely bronze.

It marks quite the turnaround for Pan, who was way down in 39th after a first-round three-over 74. Indeed, even the world number 208 himself was shocked to hold his own among the world's elite golfers.

"That was very satisfying," Pan said. "It came as a surprise to me. After day one, I remember I texted one of my good friends and I was like, 'the struggle is real'. I couldn't even think about winning a medal.

"I didn't even think about it after Thursday's round. Overall, that was a very happy ending."

Rory McIlroy was one of the players to miss out on bronze in the play-off, though even the Irishman has been won over by the success of this week's event in Tokyo – just the fourth time golf has been staged at a Games.

"I've never tried so hard in my life to finish third," he said. "It's been a great experience. Today was a great day, to be up there in contention for a medal.

"I've made some comments on the Olympics before that were probably uneducated and impulsive. I'm excited about how this week turned out and I'm excited for the future.

"It's been a throwback to the good old days when we didn't play for money. It was great, a really enjoyable week." 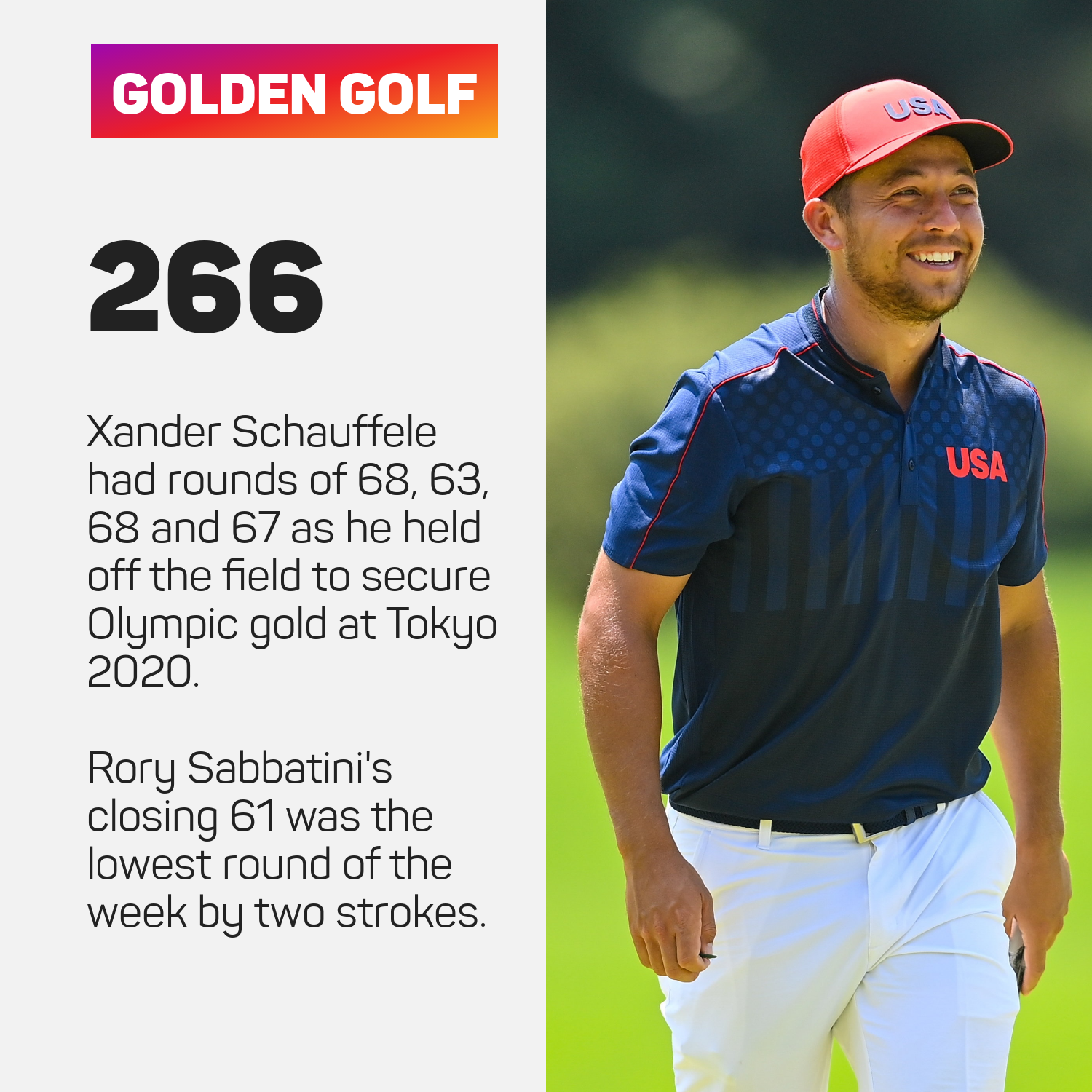 NO BETTER FEELING FOR ZVEREV

Zverev won the ATP Finals in 2018 and reached last year's US Open title match, but nothing compares to winning Olympic gold for his country in the view of the German.

Having defeated favourite Novak Djokovic in the semi-finals, Zverev carried his momentum into Sunday's final with Russian Olympic Committee's Karen Khachanov to land the biggest title of his career.

The 24-year-old took just 79 minutes to record a comfortable 6-3 6-1 victory at Ariake Tennis Park as he became Germany's first men's singles champion at the Olympics.

"There is nothing better than this," he said. "You are not only playing for yourself, you are playing for your country. The Olympics are the biggest sporting event in the world.

"The feeling I have now, and will have, nothing will be better."

MCKEON AND DRESSEL REIGN SUPREME ON FINAL DAY OF SWIMMING

Australia's Emma McKeon marked the final day of swimming at Tokyo 2020 by making history with her victories in the women's 50m freestyle and women's 4x100m medley relay at the Tokyo Aquatics Centre.

She has four golds in Tokyo and seven podium finishes in total, making her just the second woman to win that number of medals in one Olympic Games after Maria Gorokhovskaya in artistic gymnastics at Helsinki 1952.

"I never thought I'd win two gold medals in one session. I'm very happy," she said. "It is very surreal.

"I feel like it has been a bit of a roller coaster getting a gold medal and trying to keep the emotions at bay. It will take a while to sink in because I've been focusing on myself to keep my cool.

"I'm very proud of myself. I wouldn't be able to do it without all the support around me."

Caeleb Dressel rounded off his own Olympics in style, too, by finishing top of the podium in the men's 50m freestyle with an Olympic record of 21.07s, before adding a fifth gold in the men's 4x100m medley.

The 24-year-old swam the fastest butterfly split in history in the second of those events (49.03s) to help the United States to a world record time of 3:26.78, enough to hold off a Great Britain quartet that included Adam Peaty and Duncan Scott.

Dressel, who now has three of the six quickest times in history to his name, said: "I'm proud of myself. I think I reached what my potential was here at these Games.

"It was just really fun racing. I'll give myself a pat on the back and then I'll just put it away and move forward. I'm going to take a break here – I'm pretty over swimming!"

When your dream comes true!pic.twitter.com/OKV8QYSaPq

A lot has changed for Max Whitlock in the five years since winning gold in the men's pommel horse in Rio – not least becoming a father – but the outcome was exactly the same in Tokyo.

The Team GB gymnast went first and delivered a superb routine that earned him a score of 15.583. After a nervous wait, Whitlock was confirmed as back-to-back gold medallist in the discipline – just the second male to achieve that – and a three-time gold medallist overall.

Throw in the two World Championship titles he has won and the 28-year-old can now be considered the most successful gymnast of all time in the event.

"I feel absolutely lost for words, I can't even describe the feeling and I feel completely overwhelmed – it feels surreal," Whitlock told BBC Sport.

Elsewhere at the Ariake Gymnastics Centre on Sunday, Artem Dolgopyat won gold for Israel in the men's floor exercise and Rebeca Andrade became the second Brazilian athlete to win Olympic gold in artistic gymnastics by coming out on top in the women's vault.

History was made in the women's uneven bars, an event made unpredictable by the withdrawal of Simone Biles, as Nina Derwael held off Anastasiia Iliankova and Sunisa Lee to claim Belgium's first Olympic gold medal in artistic gymnastics.

Derwael, the fifth Belgian female to win Olympic gold in an individual event at the Games, said: "It's a fantastic feeling. I still can't believe it. It's been a long road to get here, it's been a long week.

"Standing on the podium was such a magical moment. I really felt like I was dreaming, and I still had to wake up. I felt like the day still had to start. It's just unbelievable."