Not many would have predicted before the season that Manchester United versus West Ham represented a key game in the battle for the top four, but that's where we are.

The Red Devils' win over Brentford moved them to within two points of the Hammers in fourth, with a game in hand, meaning Saturday's clash at Old Trafford offers a good chance to make some headway in the race to finish behind Chelsea, Liverpool and Manchester City.

It also gives David Moyes the chance to end a pretty rotten record at the home of his old club – and that's not including the nine months he was in charge there – as well as the chance for West Ham to avenge their defeat in the reverse fixture.

Let's not forget they have already won away against United in 2021-22 – and not many teams manage to do that twice in a season. The last one, in fact, was managed by Jose Mourinho.

United have won 20 of their 25 home games against West Ham in the Premier League, their last defeat coming in May 2007, when soon-to-be Red Devil Carlos Tevez secured a 1-0 win for the visitors.

Yet their record when London clubs come calling hasn't been so strong of late: they have lost three of the previous eight home games against teams from the capital, as many such defeats as they suffered in 38 matches at Old Trafford between 2013-14 and 2019-20.

West Ham, of course, boast the rare feat of being above United in the table: while they sit fourth, United are seventh. Only four times previously in the Premier League era have the Hammers faced them while being placed higher in the standings; interestingly, they failed to win any of them, losing 2-1 in August 1995 and September 2014, drawing 0-0 in August 1998 and losing 3-1 in December 2020.

Moyes has done a quite brilliant job at West Ham since being parachuted in to rescue them in December 2019. Since the start of 2020-21, he has managed 30 wins from 60 league matches, accruing 102 points in that time. The only sides with more victories and more points are United, Chelsea, Liverpool and Manchester City. 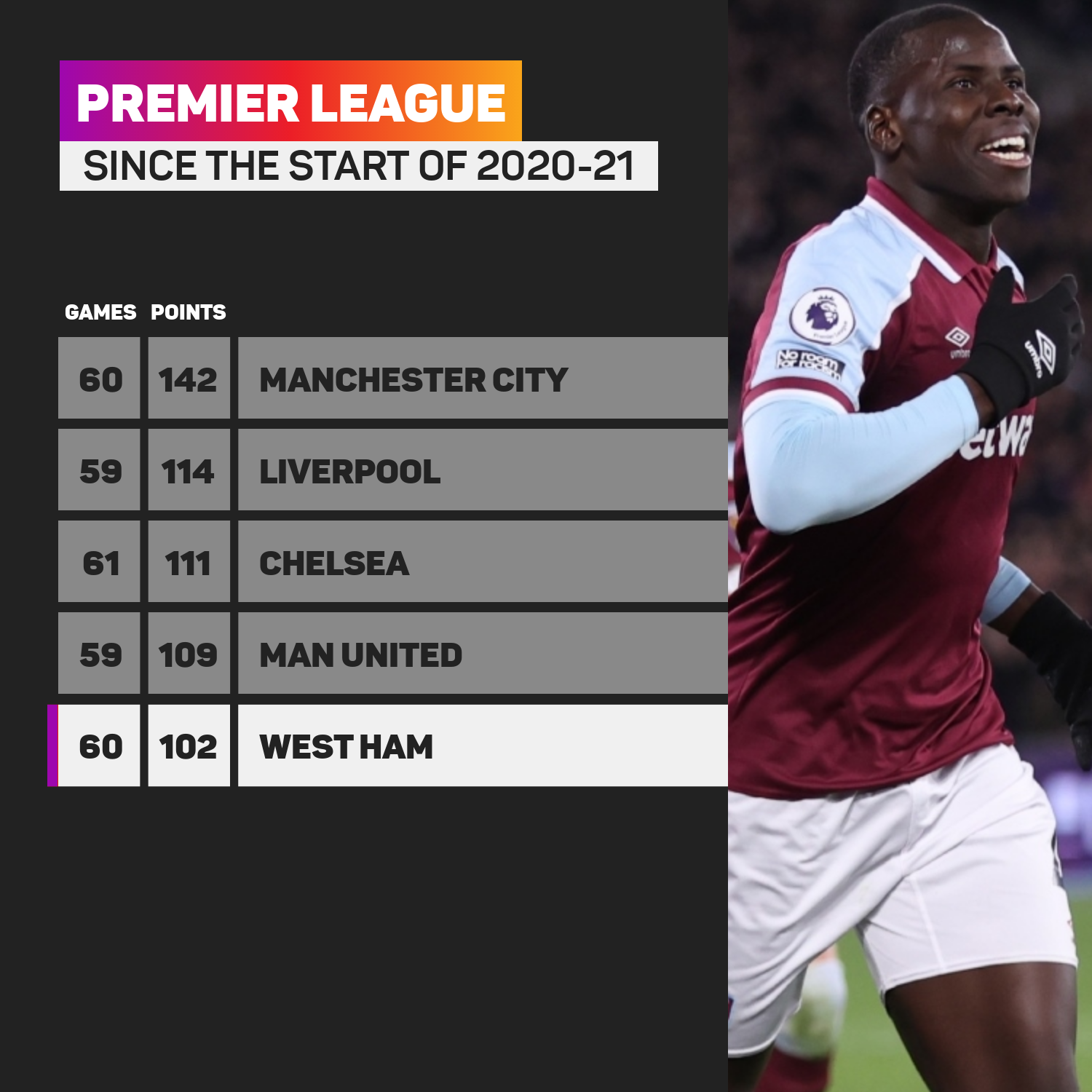 Old Trafford, though, is not a happy hunting ground for the former United boss. He has drawn four and lost 10 of his away games at the stadium as a Premier League manager; only Harry Redknapp (15 games) has visited more often in the competition without a single win.

That being said, Moyes did lead West Ham to victory on this ground in the EFL Cup back in September, and they could become just the fourth team to beat United away twice in the same season after Aston Villa (1919-20), Tottenham (1989-90) and Chelsea (2004-05).

Cristiano Ronaldo scored in United's dramatic 2-1 win in the reverse fixture in September, in which he was also denied a couple of pretty strong penalty shouts before Mark Noble's injury-time spot-kick was saved by David de Gea.

The Portugal great has always quite enjoyed facing the Hammers, with six goals and one assist in his five league appearances against them. He was directly involved in seven of the 10 United goals in those matches, in fact, so you wouldn't bet against him keeping up that record – assuming, of course, he isn't having a strop on the bench instead.

Jarrod Bowen, arguably West Ham's most in-form player, is another who will be hoping to make an impact.

He has scored six and assisted seven goals in his past 18 league appearances, including goals in his most recent two, but the former Hull City man has only scored three times in 43 top-flight matches on the road, converting a meagre four per cent of his shots (3/69). 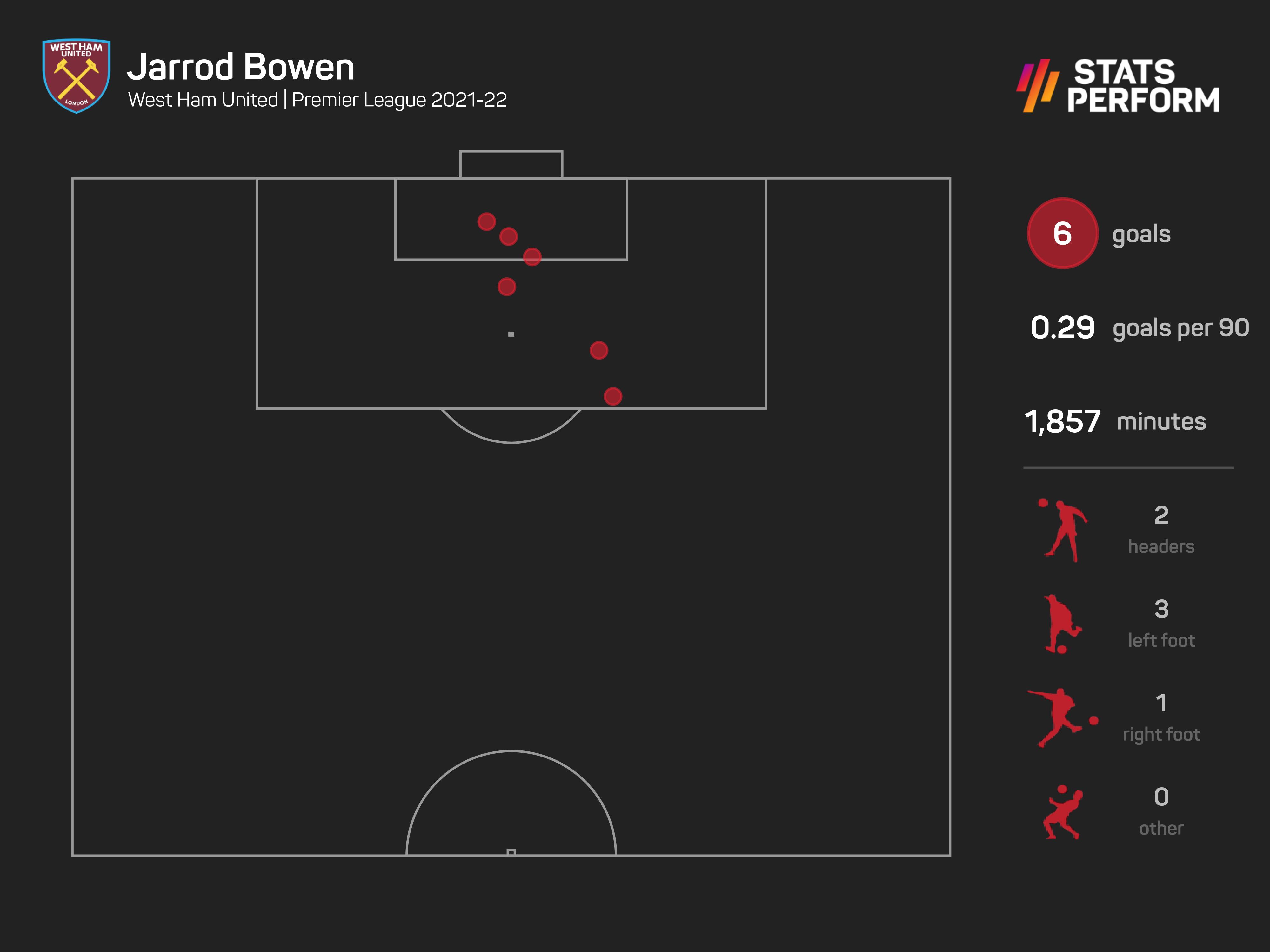 Bowen has played seven times against United from the start, but he's never scored, and only twice has he even lasted the whole game.

It's a minor novelty in itself that United are playing a match at 15:00 local time on a Saturday. Such is their global appeal that broadcasters are usually quick to shift them to a more viewer-friendly kick-off time.

Ralf Rangnick might actually have preferred a different slot. United have lost their most recent two games to start at this time on a Saturday, both of which were this season: 4-2 at Leicester City, and 4-1 at Watford, a result that ended the reign of Ole Gunnar Solskjaer. Never before have they lost three in a row when playing at this time.

United's opening league game of 2022 ended in a 1-0 loss to Wolves at Old Trafford. They have not lost their first two home league matches in a year since 1985, when Ron Atkinson's side were beaten by Sheffield Wednesday and Coventry City. They did go on to finish fourth, though...