Carrick still yet to speak with Rangnick despite interim manager's appointment

Ralf Rangnick has been hired to manage Manchester United until the end 2021-22, but he still has not spoken to the man currently in charge.

Manchester United caretaker manager Michael Carrick still has not spoken to Ralf Rangnick about the team despite the German's appointment as interim boss being confirmed on Monday.

United announced at the start of the week that an agreement had been reached with Rangnick over a relationship that is set to span two and a half years.

Initially, Rangnick will take charge until the end of the season before moving into a consultancy role.

Rangnick has previously shaped German clubs such as Hoffenheim and RB Leipzig from top to bottom, with his future advisory position at Old Trafford suggesting United are planning an overhaul of their football operations, which have long appeared outdated compared to their rivals.

But the 63-year-old's start at the club has been delayed due to work permit issues – according to reports, Rangnick does not been the criteria for an automatic visa because he has only coached one season out of the past five.

While United are not thought to be concerned about the outcome, the situation is hardly helpful to the playing and coaching staff who are awaiting Rangnick's arrival.

It was suggested at the weekend that United's apparent greater pressing intensity in the 1-1 draw with Chelsea may have been influenced by Rangnick – Carrick denied that was the case at the time, and ahead of Thursday's visit of Arsenal, the caretaker manager claimed they have still not spoken to each other.

"It's pretty much as it was because of the process and work permit, we've not been able to [talk to each other]," Carrick told reporters on Wednesday.

"We've carried on as we have done. It's worked well for last two games and hopefully it does tomorrow.

"Literally, I've nothing to update you on other than the process of the visa is ongoing and going through now, so I'm in this position as I was for Chelsea and Villarreal, getting the boys ready for the game."

Carrick caused something of a stir by leaving Cristiano Ronaldo out of his starting XI at Stamford Bridge, instead opting to use him from the bench.

Despite it appearing a shock from the outside, Carrick insists it was not considered a big deal in the United dressing room.

"Those decisions get blown up a lot bigger than they are in the club," he continued. "Decisions are made for a lot of different reasons.

"I think those type of decisions get blown up really. I think a lot are," Carrick adds in reference to Sunday's starting line-up.

"We all got on really well, the game went well to an extent as well, and it wasn't a drama at all." #MUFC | #MUNARS

"Of course, some things are bigger news than others, that's how it is. I didn't see it a major decision; it certainly wasn't in the group.

"We got on with it, the game went well to an extent and it wasn't a drama at all."

Carrick's two games in charge have resulted in a 2-0 win at Villarreal in the Champions League and the stalemate against Premier League leaders Chelsea.

One player whose performances have caught the eye in those games is Fred, the much-maligned Brazilian midfielder who had frequently appeared out of his depth under Solskjaer.

Across the past two games, Fred has at least seven more recoveries (19) than any other United player, he ranks highest for possession won in each third of the pitch and his six interceptions is double that of any of his team-mates – suffice to say, Carrick has been impressed. 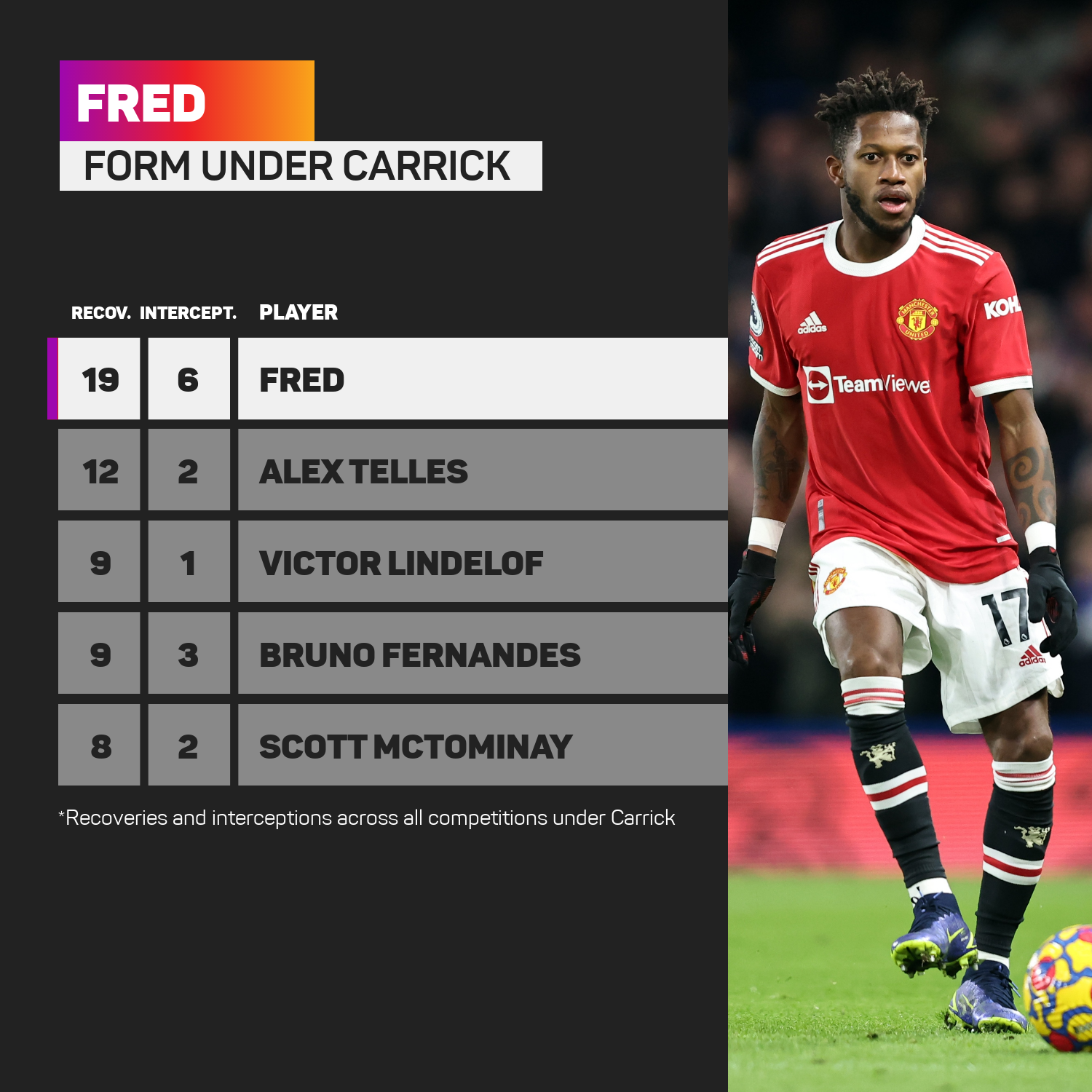 He said: "I think it gets overlooked – first choice for Brazil in a good Brazil team shows how far Fred's come since he came to the club, and how much he's improved.

"I really like him. One of the biggest things is his attitude and desire to be a key player, desperate to put himself out there and play games.

"He twisted his ankle against Villarreal in the first half and it would've been enough to force other players off – to carry on when it's swollen and sore is hard but he carried on then bounced into the game and there was no way he was going to miss the next game.

"That mentality is infectious. I think he's improved an awful lot, Fred. He brings a great energy to the team and he's improving.

"He's played a little higher up the pitch than before because we tweaked a couple of things for both games and he's done ever so well.

"The regains, and especially for Cristiano's goal against Villarreal, epitomises that and he almost did it when he intercepted from [Chelsea goalkeeper Edouard] Mendy. He brings an awful lot to the team and I like him an awful lot."