Brazil great Cafu feels he and "one of the best right-backs in the world" Trent-Alexander Arnold share many similarities, while he heaped praise on England's transformation under Gareth Southgate.

Alexander-Arnold remains in contention for an unprecedented quadruple with Liverpool, who have already won the EFL Cup and FA Cup and face Real Madrid in the Champions League final next Saturday.

Jurgen Klopp's side also head into the final day of the Premier League season just a point behind leaders Manchester City, requiring a win against Wolves and hoping Pep Guardiola's side falter against Aston Villa.

Alexander-Arnold has again been one of Liverpool's stars this campaign, with his 120 chances created far ahead of any other defender in Europe's top five leagues – David Raum in second has 88.

The England international also leads the way for assists in the same group this term, with his 18 putting him three clear of Liverpool team-mate Andy Robertson.

Former right-back Cafu, who played most of his career in Serie A with Roma and Milan, was quick to hail the progress Alexander-Arnold has made.

"I have been following Alexander-Arnold and the campaign he has had at Liverpool," he told BBC Sport. "His progress over the last few years has been amazing and for sure is one of the best right-backs in the world.

"He is young, strong and has developed hugely considering his age. He also has a lot of experience and I see a lot of similarities between him and myself.

"We both had a will and commitment to attack, to go forward and have the boldness to shoot and to put the crosses in. The diagonal movements he makes on the pitch are also similar to what I was making as a player." 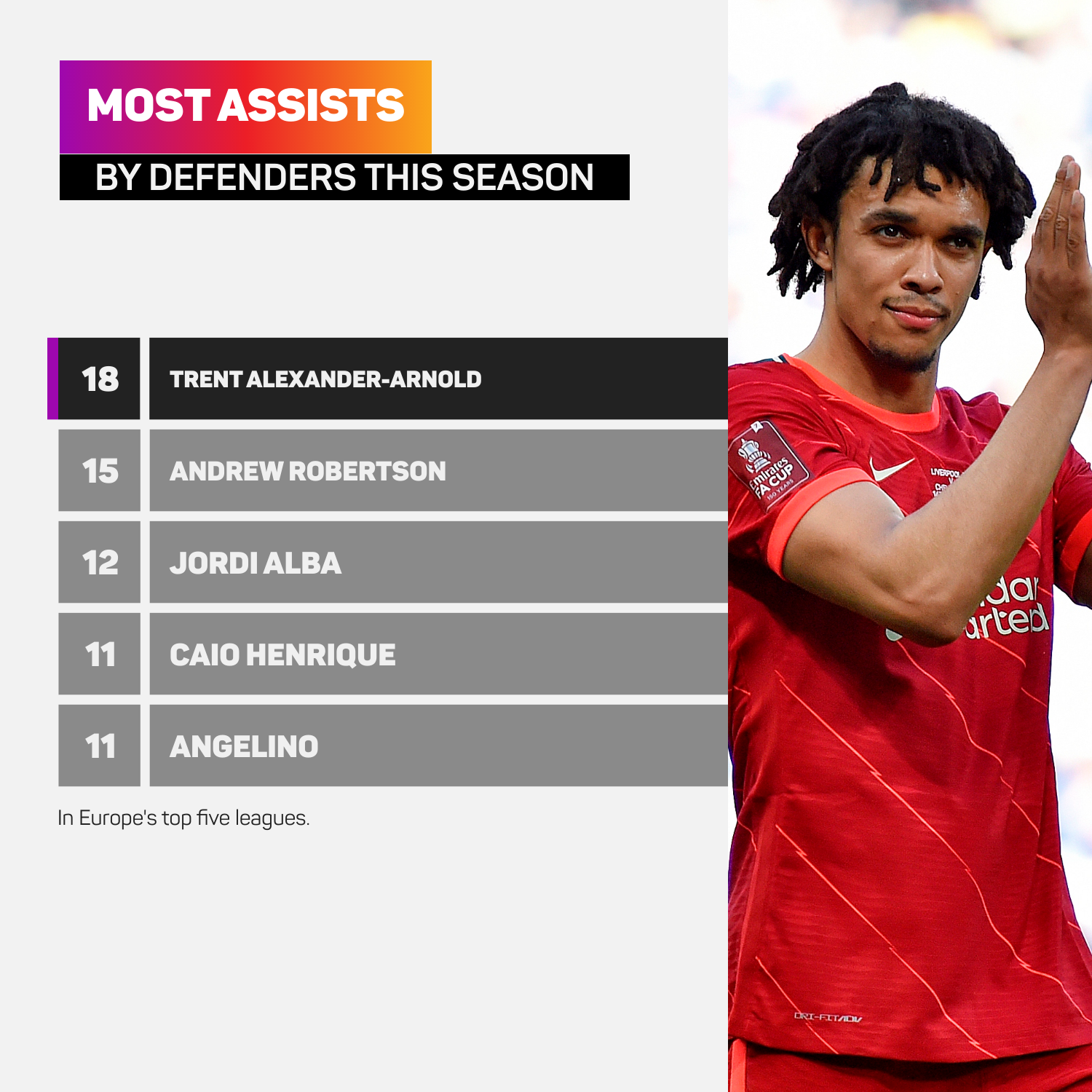 Alexander-Arnold will hope to carry his club form into international duty in the Nations League with England before aiming for World Cup glory in Qatar in November and December.

Southgate's side made their first major final since 1966 by reaching the Euro 2020 showpiece and Cafu credited the changes the England boss has overseen.

"I have been following England and the evolution of their national team has been very good under Gareth Southgate," he added. "Along with Portugal, I consider England as the team to have evolved most on the pitch in the last few years.

"They have a very strong squad with individual players who are performing at a very high level for their clubs. This helps the national team and the progress they have shown with their players means they have a good chance to go far in the [World Cup].

"If the England players listen to their coach as a group, then they have a better chance of winning."

Mauricio Pochettino has expressed his gratitude for the chance to coach Paris Saint-Germain after departing the club as a Ligue 1 champion.

Wout Weghorst struggled upon joining Burnley in January, and will hope to rediscover his form on loan at Istanbul giants Besiktas.

Tyrell Malacia will thrive after joining Manchester United, according to former striker Robin van Persie, who played with him at Feyenoord.

Ons Jabeur continued her Wimbledon tilt with a quarter-final win over Marie Bouzkova, recovering from a set down in superb fashion.

Novak Djokovic will face Cameron Norrie in the Wimbledon semi-finals, after the Brit's five-set win over David Goffin on Tuesday.

Inter head coach Simone Inzaghi is excited by the prospect of working with Romelu Lukaku after the striker returned to San Siro on loan.

After finishing second in each of the opening three Tour de France stages, Wout van Aert cruised to a brilliant triumph on Tuesday

Novak Djokovic was in deep trouble when he dropped the first two sets to Jannik Sinner, but the Serbian went into Centre Court beast mode.

A Premier League footballer arrested on suspicion of rape has been released on police bail.

Spain are considered favourites by British bookmakers, but Stats Perform analysis of Euro 2022 contenders puts England front of the queue.