Chelsea dropped points again at home and will now have to respond, although Thomas Tuchel was "absolutely happy" with the performance.

Thomas Tuchel declared himself "absolutely happy" with Chelsea's performance against Manchester United and promised to "steal back" the points they dropped in a 1-1 draw.

Premier League leaders Chelsea moved only a point clear of Manchester City after they were held at home on Sunday.

Jadon Sancho pounced on a Jorginho error to score his first Premier League goal, before the Chelsea midfielder responded by converting an equalising penalty.

This was a second consecutive home game in which Chelsea have failed to deliver maximum points, also drawing 1-1 with Burnley.

Frustratingly for Tuchel, the United match followed the pattern of the Burnley game in that Chelsea dominated; across those games, the Blues have attempted 49 shots and faced just eight while taking 100 touches in the opposition penalty area.

"We cannot be surprised. Things like this happen," the coach told Sky Sports.

"It's happened now twice to us that we invest so much and we play such good games against Burnley and Man United and feel a bit disappointed, because we feel we did by far enough and pushed the limits and pushed the standards to win these games.

"Over a long season, you drop points and you dig in and you try to steal them back if somebody steals points from you. This is what we do. 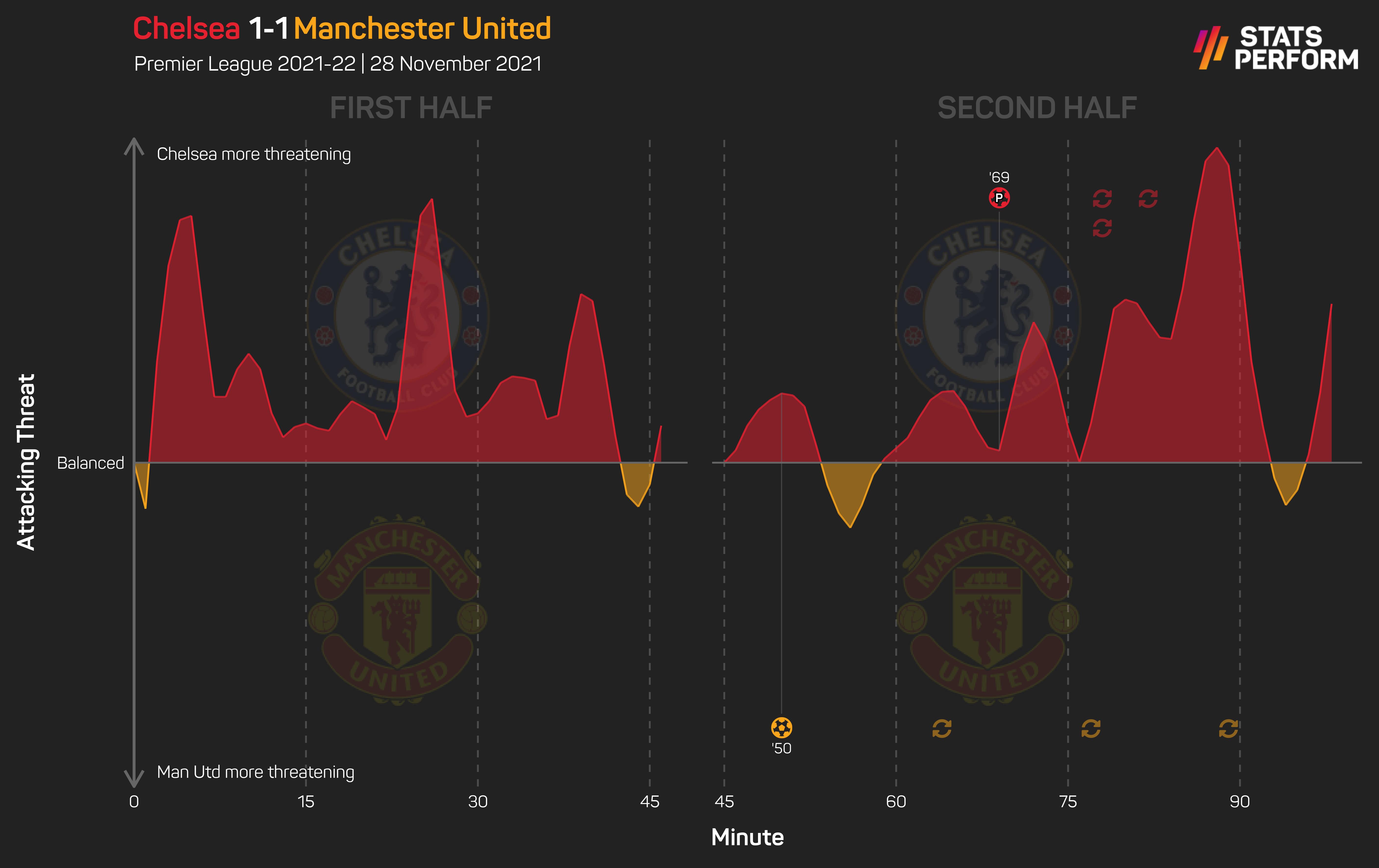 "We don't count the points, when we are four up or one down or whatever. We are in the middle of the race, and this is where we want to be. From there, we go."

Tuchel said he could "not at all" see the influence of Ralf Rangnick – his mentor, set to be appointed at Old Trafford – in United's play and was also "not at all" surprised by the visitors' performance.

Of his own side, he said: "I'm happy, absolutely happy. I was happy to coach the team, I saw a huge effort, big intensity.

"We had so many ball recoveries in the opponents' half, put the pressure up high. We controlled the counter-attacks before they started. We were brave and courageous.

"They defended deep and you need maybe the first goal to open it a bit and to gain the last per cent of maybe freedom and confidence to have follow-ups and goals and big chances.

"If you don't score, you always run a bit behind, because you feel that you're the stronger team, you play in the opponents' half.

"We had two or three big chances that we should have maybe used, but in general I'm very happy, because I like the way we played."

Chelsea are now winless in eight against United in the Premier League, their second-longest such league sequence in this fixture.

It was the fifth time the Blues have hosted United as the Premier League leaders, winning three and losing one of the previous four. The three victories were followed by title triumphs.