Thomas Tuchel has seen Chelsea become a defensively solid side, with Mason Mount impressed by his influence.

Mason Mount is impressed with the impact Thomas Tuchel has had on Chelsea's defence since replacing Frank Lampard in January.

The German led Chelsea to Champions League success last season just a few months after being hired, though there is every indication he is turning the Blues into a team that will challenge for the major honours on a consistent basis.

Chelsea went into the weekend with a three-point lead at the top of the Premier League – only Liverpool (35) had scored more than them, though Tuchel's side boasted the best defensive record with just four conceded in 12 games.

Manchester City (22) were the only club to have allowed fewer shots on target than the Blues (39) over the first 12 matchdays – similarly, Pep Guardiola's men (7.7) were the sole club with a lower xGA (expected goals against) than Chelsea (12.2).

During Lampard's only full season in charge, Chelsea conceded 54 times from an xGA of 38.95 – they let in 15.05 goals more than the average team would have expected based on the quality of chances, comfortably worse than the second-worst sides in that metric over 2019-20 (Norwich City and Everton, both 7.2 over xGA). 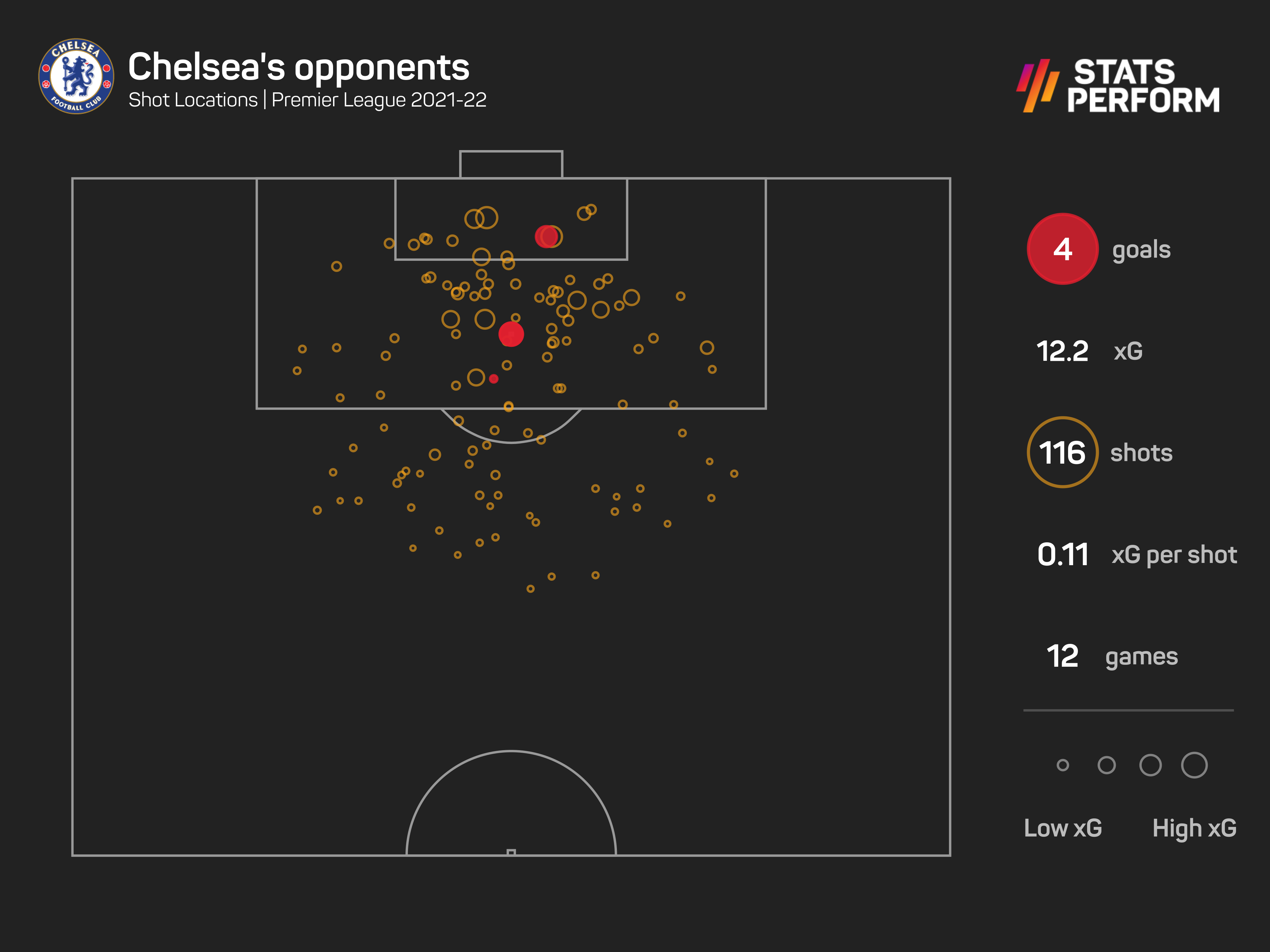 Their improvement defensively is not lost on Mount.

"[Tuchel] is brilliant to work under," Mount told Sky Sports ahead of Sunday's clash with Manchester United. "He is very intense when the games come around and in training, but off the field he is very relaxed, someone you can talk to and he puts his arm around you.

"So, it is the best of both, but when you don't perform, he will not be happy and will tell you. And that is definitely something that keeps us on our toes and keeps us going. We have set a very high standard, and we always want to keep that going and training is a big thing.

"We always look at the opposition a few days before we play them, but most of it is just focusing on ourselves. We know what we can do as a team and if we are doing those simple things the best we can, then we are always able to open up those pockets of space and create chances.

"Defensively, that has been a big change for us, and we do not really give many chances away and that starts from the front. The way we press at the front sets the tone and at the back, with the change of formation and the shape we do play, it helps at the back so the full-backs can press the side where the ball is, there is cover the other way and just move and that has really helped us."

While bossing Chelsea did not work out for Tuchel's predecessor Lampard, Mount enjoyed his breakthrough at the club under the Blues legend, having also played for him at Derby County.

Mount was one of the main beneficiaries of Lampard's season and a half in charge and has remained a key figure under Tuchel.

He still sees Lampard's playing style as a source of inspiration, with Mount putting significant work into his end product in attack.

"I always look at my game and think I can score or create more, be more of a threat going forward. That is something I've always looked at in training with finishing drills, how I get into the box, looking with (coach) Joe Edwards at how my runs into the box affect the play," he said. 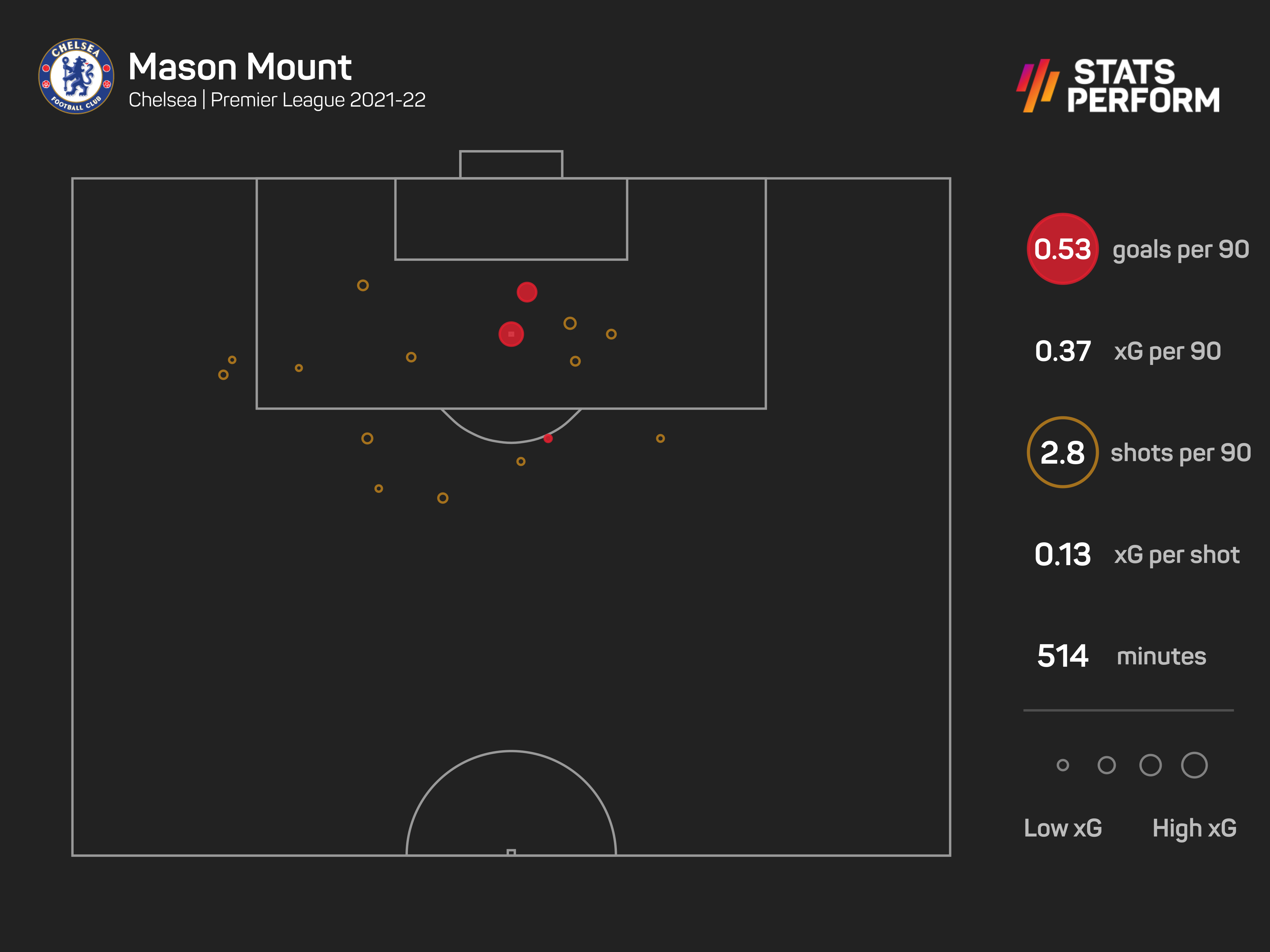 "So that is a big part of my game that I want to improve. You look at how big stats are now – what crosses come in and the percentage of goals that come from different crosses we look at and what area of the box do you score most goals, it is around the penalty spot and in the six-yard box, you rarely see goals from outside the box, mostly 'worldies' now, but not many.

"So I'm just trying to get in the box as much as I can now."

He still has work to do, though.

Mount is touching the ball on average 4.2 times in the box every 90 minutes – although that is an increase on his figure for Lampard's final few months, it's the same amount he recorded over the course of 2019-20.

But he is getting more shots away in such areas. He averaged 0.9 shots on target every 90 minutes during Lampard's first season and then 0.6 in the first half of 2020-21, but that increased to 1.1 after Tuchel's hiring and then again to 1.2 this season.

Australian Open: Barty's variety to be tested by Collins' aggression in intriguing final

Danielle Collins is all that stands between Ash Barty and a first Australian Open title.

Anthony Davis had another injury scare in his second game back since returning from an MCL sprain.

Liverpool are set to swoop on Paulo Dybala's situation with Juventus, although Manchester City and Inter are also interested.

Australian Open: Crowd capacity increased to 80 per cent for finals

Rod Laver Arena will be up to 80 per cent full for the Australian Open finals.

Joel Embiid and Anthony Davis faced off, as the Philadelphia 76ers claimed their 13th win from their past 16 games.

Referee Wilmar Roldan handed out two red cards inside the opening 25 minutes, while he sent off Alisson twice only to be rescinded twice.

Embiid driven by winning games not the MVP award

‘Sampai Mati Kuala Lumpur’ to premiere on Astro on February 1

Lee Zii Jia and Goh Jin Wei could be part of Malaysia’s contingent at the upcoming Asia Team Championships (February 15-20) after the duo were cleared to compete in all international events with immediate effect.