Jurgen Klopp lauded Diogo Jota once again as Liverpool turn their attention back to the Premier League and Sunday's clash with Crystal Palace.

Jota scored twice in a 2-0 win for the Reds at Arsenal on Thursday in the second leg of their EFL Cup semi-final.

Once more shorn of Sadio Mane and Mohamed Salah, who are on international duty with Senegal and Egypt respectively at the Africa Cup of Nations, Liverpool progressed with relative ease to set up a final against Chelsea next month.

It is the first time the Reds have made a cup final since 2019, when they won the Champions League by defeating Tottenham in Madrid. 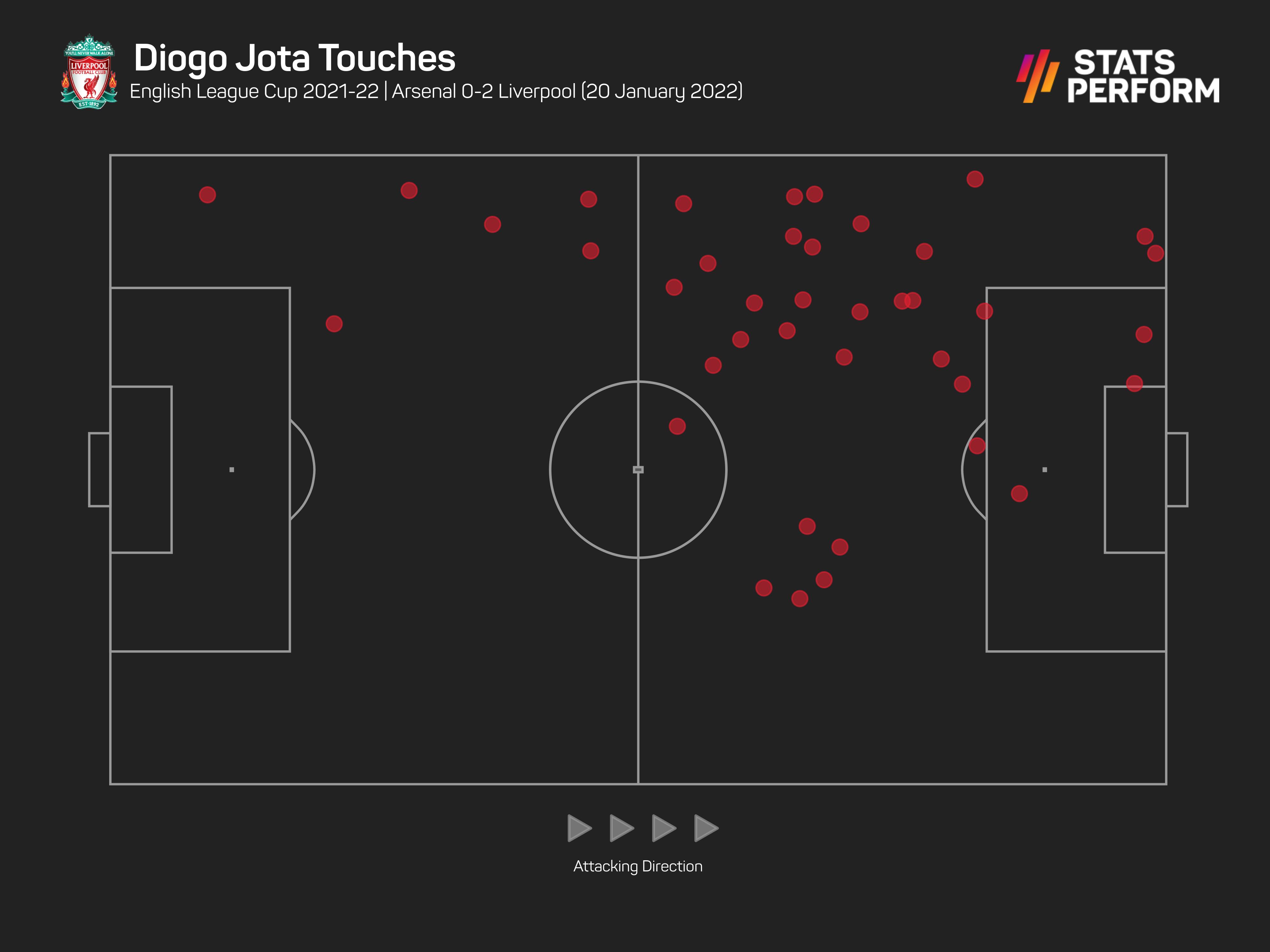 Liverpool spent £41million to sign Jota from Wolves in September 2020 and he has gone on to score 27 goals in 57 appearances across all competitions.

Since he made his debut on September 24, 2020, only seven Liverpool players have featured more times across all competitions than Jota, with just Salah (51) able to better the Portugal international's goal tally.

Of outfield players to have featured at least five times, Jota has the third-best shooting accuracy (excluding blocks), with 59.1 per cent.

Jota is second in the Premier League scoring charts this season with 10 goals from 20 appearances, trailing only team-mate Salah (16), although he has slightly underperformed his expected goals (xG) of 11.4, suggesting he has missed some big opportunities.

After the win at Emirates Stadium, Klopp hailed Jota as a "world-class striker" and, in Friday's news conference to preview the trip to Selhurst Park, Liverpool's manager explained that the forward's quality was already there before he joined the club.

"Work," Klopp answered when asked what the trick to Jota's success was. "But if you don’t have the basis, nobody can perform miracles.

"Diogo came in and he was an outstanding player, but it helps if you are a striker when your team has more of the ball. Yesterday he had to do an awful lot to make it happen. 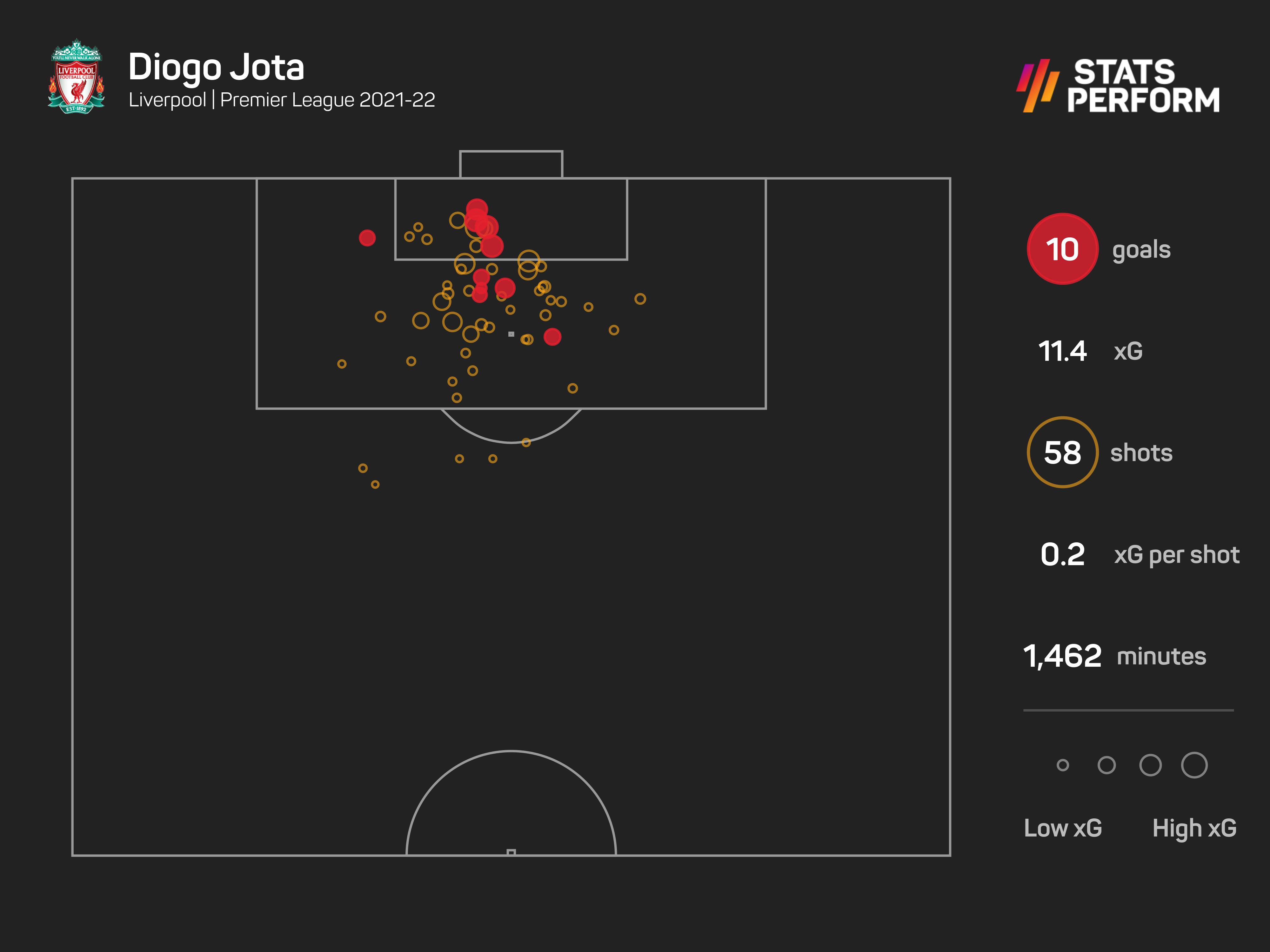 "He was in the middle of the team after three weeks, there was no time to adapt. I'm really happy for him. If you have this quality it’s nice that you can show it and that's what he's done."

Klopp also stressed the importance of Liverpool switching focus back to the Premier League and putting thoughts of the EFL Cup final to one side.

"The boys really wanted it and made it happen and are really looking forward to the final. The only problem is six or seven games to play until then. So we have to put it to the side a little bit but keep the feeling," he said.

"We were flying after the game, the boys were in a really good mood. That's how it should be. It gives us confidence, everything that was said without [Mane, Salah and Naby Keita] available, it's good for us.

"But we have to create a different mood until Sunday because Palace away, they don't give any presents, so we have to be in the fighting mood again.

"We will be, we are not kids anymore. We take the feeling, hopefully can use it but we have to be greedy again, aggressive and fight with all we have. Palace will ask for that. That's what I'm concerned about, not how we can keep this feeling before the final."

Liverpool have won their last six Premier League away games against Palace, including a 7-0 victory in the corresponding fixture last season, though Klopp is expecting a much sterner test this time.

"A one-off, a freak of nature. That day was incredible, we scored pretty much with each shot," Klopp added.

"We don't expect that again. They've changed and improved under Patrick [Vieira], they look like a really stable team. It's a really good Premier League team with a few unlucky results."