England should have Harry Kane available against the United States, although the win over Iran suggests they are not short of options.

Harry Kane may be England's key attacker, but the threat of him potentially missing their second World Cup match against the United States was perhaps not as concerning as it once might have been.

Three Lions captain Kane hobbled out of a dominant 6-2 win over Iran in the team's Group B opener.

Kane had supplied two assists in that victory, but he did not get on the scoresheet and England were not lacking for options in front of goal.

Five different players found the net; only in 2018, when Kane won the Golden Boot and was one of six England scorers, have they had more across an entire World Cup.

Nine players were involved in goals, the most for any team in a finals match since Yugoslavia versus Zaire in 1974.

Kane is expected to be fit to play against the USA, yet Callum Wilson had an impact from the bench in the Iran game and scored his only international goal to date against England's next opponents in November 2018.

Jordan Pickford was certainly unconcerned as he cited Wilson as an example when backing his team-mates to step up.

"I think everyone will take their chance," he said. "When Harry came off after about 70 minutes, Callum came on and played really well.

"[Wilson] got the assist for Jack [Grealish], was very unselfish and gave Jack his goal.

"I think everyone is training really hard, everyone is here for a reason – to play football." 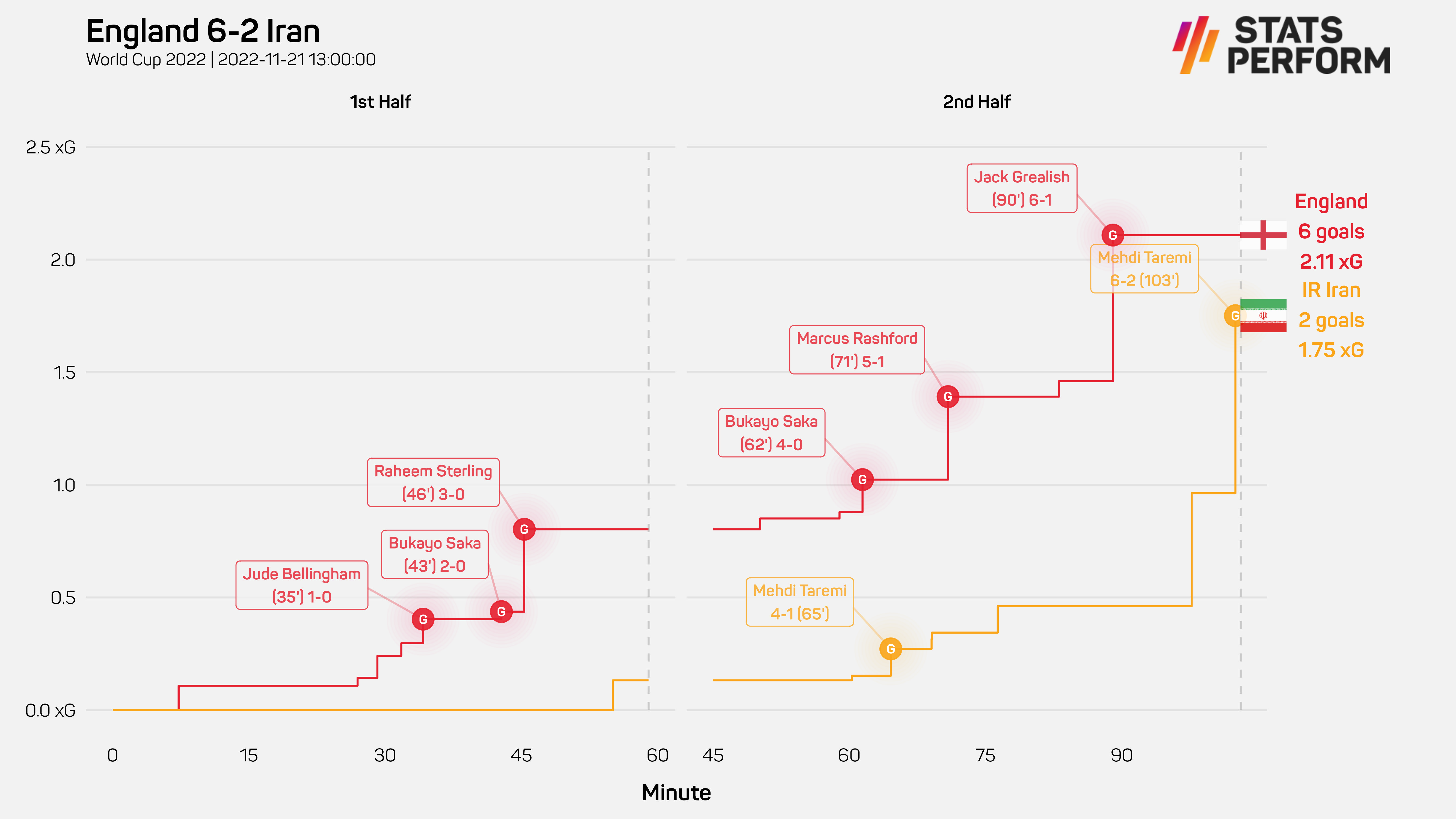 The United States were not as ruthless, however, as they drew 1-1 with Wales.

Pickford's opposite number Matt Turner said: "I think one of the main things for us is we missed some opportunities in transition against Wales in the second half.

"We had chances where we just weren't particularly clean in the final third. Maybe a pass was a little off or the timing was wrong and it took away the small windows that you have in the World Cup, where the margins are so thin to score goals.

"So, I think we know that we're going to have to be better in transition against England if we want to score goals."

England have won eight of their 11 games against the United States, yet none of those victories have come in their two World Cup meetings. The USA won 1-0 in 1950 and drew 1-1 in 2010.

Saka was brilliant in netting twice against Iran, adding to Jude Bellingham's opener to make this the first example of two players aged 21 or younger scoring in the same World Cup game for England.

Should either Saka or Bellingham net again, they would become the youngest England player to score in consecutive matches at the finals. Saka certainly looked capable of adding to his tally.

George Weah never played at a World Cup, but his son Timothy now has, and he scored against Wales. That was his second goal in four internationals, as many as in his first 22 United States outings.

Weah Jr will be bidding to become only the third USA player to score in the first two matches of a World Cup campaign – also Bert Patenaude in 1930 and Clint Dempsey in 2014.

With or without Kane, Stats Perform's supercomputer expects England to fare just fine. They are given a 60.1 per cent chance of making it two wins from two in Group B.

The United States have a history of upsetting the Three Lions, though, even if the model rates them as an outside 18.8 per cent shot. A repeat of 2010's draw is rated at 21.1 per cent.

England's "golden generation" flopped, but Roberto Martinez does not believe the same is true of his trophyless Belgium side.

Messi and Barcelona deserve one last dance together – Jordi Cruyff

Paris Saint-Germain forward Lionel Messi spent 21 years on Barcelona's books and a return to the club one day has not been ruled out.

"Fake news" around Belgium was reported a little too easily, according to Roberto Martinez, showing the team are "on our own".

Against his former team, Norman Powell's 32 points helped the Clippers to victory, with coach Ty Lue full of praise.

Australia ended day one of the first Test against West Indies on 293-2 thanks to some brilliant battling from Marnus Labuschagne.

Rory McIlroy has emerged as a figurehead for the PGA Tour this season with both his game and his actions, earning Tiger Woods' plaudits.

With illness in the England camp, Pakistan are considering whether to postpone their first Test match.

Babar credits De Villiers as batting inspiration: 'My ideal is everything he is'

Ahead of his side's Test series with England, Babar Azam has opened up on the inspiration he has taken from a modern South Africa great.

With another monster performance in the bag, Jason Kidd is aware the Dallas Mavericks have a magic talent in Luka Doncic.