Diego Carlos, Botman or both – why Newcastle must spend big at the back

Diego Carlos is reported to be Newcastle United's leading target as they aim to improve an awful defensive record.

Newcastle United plugged one of the two gaping holes in their side in time for last Saturday's huge game against Watford.

Chris Wood made his debut as the club's only fit senior striker following his £25million move from relegation rivals Burnley.

However, at centre-back, Jamaal Lascelles and Fabian Schar were again paired, prompting an all too predictable finale in which the former – Newcastle's captain – was beaten in the air for a dramatic Watford equaliser.

Newcastle have been pushing hard for defensive reinforcements to fit in alongside Kieran Trippier, but Lille insist Sven Botman will not be sold in January and a pursuit of Sevilla's Diego Carlos is also dragging on, while interest in Benoit Badiashile of Monaco – another mooted option – has been complicated by his injury.

Regardless, the Magpies' bottomless budget simply must deliver a centre-back in the coming days, for Eddie Howe's men – still with only a single win this season – risk being cut adrift, as the world's richest club or otherwise. 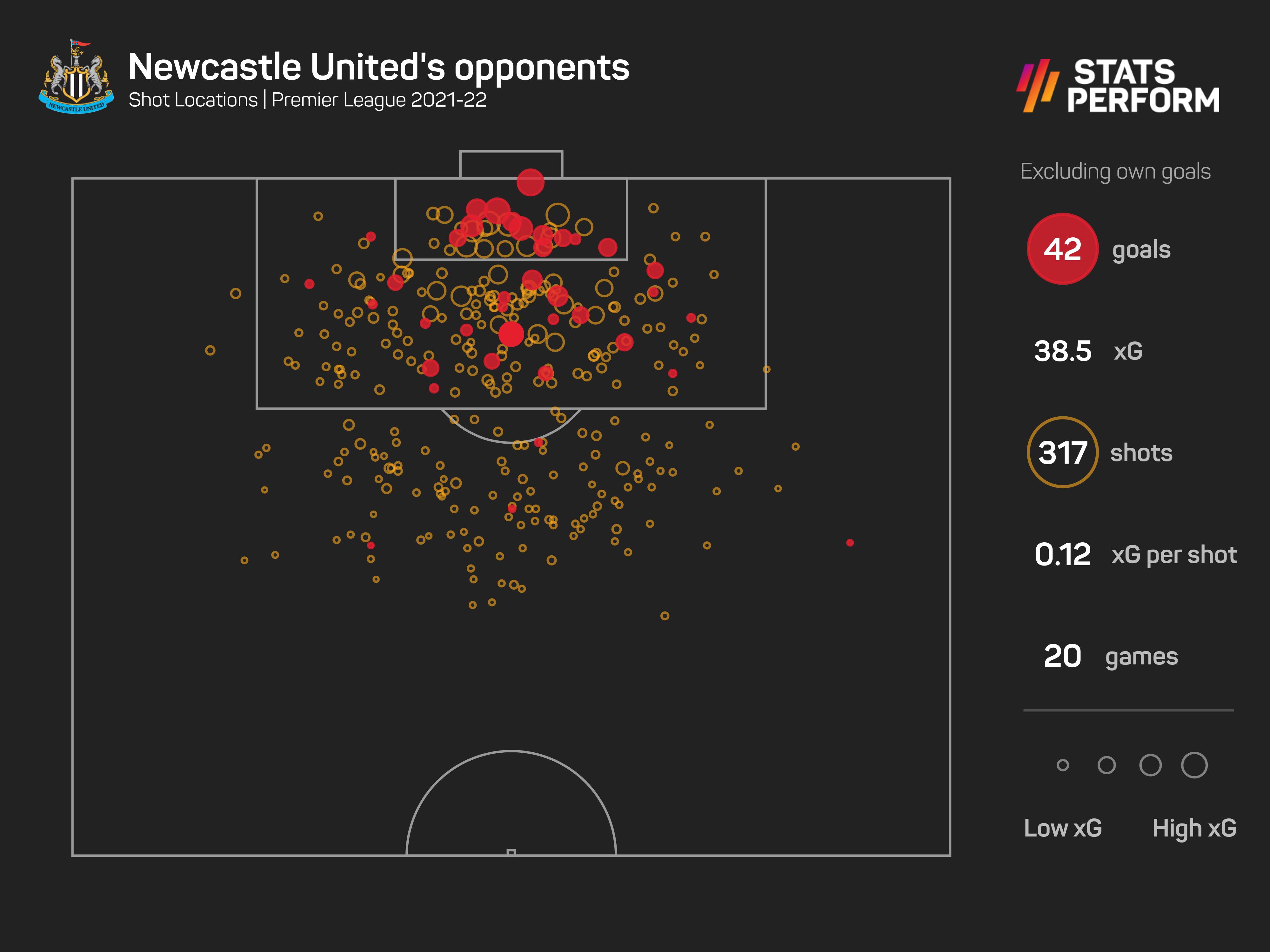 Wood did not have an immediate impact, and Newcastle's attackers have struggled to aid their defensive colleagues this season, never once forging a two-goal lead in a game.

But when they have been able to net first, doing so in 10 different matches, including against Watford, that back line has failed miserably to protect their advantage.

Newcastle have dropped a league-leading 21 points from winning positions. With 18 matches to play, an unwanted club record of 31 (in 2004-05) is coming into view.

21 - Newcastle have dropped more points from winning positions than any other team in the Premier League this season (21), and have only won one of the 10 games they have scored first in (D6 L3). Fragile. pic.twitter.com/XwkzGIFBLU

This dismal trend has resulted in nine draws through 20 games, their most at this stage of a season in the competition's history (beating eight in 20 in 2003-04).

Having lost fewer games (10) than 13th-placed Aston Villa (11) and trailed for only 35 per cent of their time with the ball in play (the same proportion as 10th-placed Leicester City), it will be these draws that relegate Newcastle, with such fine margins deciding their destiny to this point.

Newcastle have missed at least one 'big chance', from which Opta would expect a player to score, in six of their nine draws – including Joelinton on Saturday and each of Sean Longstaff, Ciaran Clark and Jacob Murphy in the reverse fixture at Watford (another 1-1) – while their opponents have been far less profligate with the opportunities afforded by some generous defending.

Newcastle have gifted away a league-high 10 goals this term through errors leading to goals (four), penalty goals (five) and own goals (one), representing 23.3 per cent of the alarming total of 43 in the goals against column.

It is a statistic that reflects slightly harshly on the St James' Park outfit, given Newcastle have given up just eight chances through errors. Only Everton (six goals from eight errors) have been punished more ruthlessly.

But there can be no doubt Howe needs upgrades in that area of the pitch.

Not content with squandering opportunities at one end, Clark is the only player in the Premier League to make an error leading to a goal, concede a penalty and be sent off this season – all in the space of 993 minutes. In fact, his error against Manchester City came inside five minutes on his return to the team having been dismissed after nine minutes against Norwich City.

Long-term colleague Lascelles has been little better. He alone has conceded three penalties this term, more than any other player in the division. Meanwhile, Schar is the sole Newcastle player to have committed multiple errors leading to shots.

There are only weak links in the middle of that defence right now.

No Botman and Robin but a DC superhero?

With Trippier already on board, Newcastle could yet recruit an entirely new defence this month, with Howe said to want two centre-backs – Botman and Diego Carlos appear the top targets – alongside a left-back.

Robin Gosens was the latest name to emerge and be dismissed as an option by his current employers, Atalanta, over the weekend, but Newcastle surely have to land at least one of these ambitious targets in time for another vital fixture at Leeds United on Saturday.

Botman showed on Sunday why he is so sought after and why Lille are so keen to keep hold of him, scoring at Marseille while also contributing 12 clearances and three blocks as the 10-man champions earned a draw. It is only the second example in Europe's top five leagues this season (also Dante versus Rennes in December) of a player making at least 12 clearances and three blocks.

Diego Carlos, it would appear, is a more realistic buy in January, despite his importance to a Sevilla team who have conceded only 13 goals in 20 league games this term – a joint-low alongside Manchester City across Europe.

The Brazil Olympic champion has started 19 of those games and leads LaLiga in blocks (21); interestingly, Burnley's James Tarkowski, another player of interest to Newcastle, tops the Europe-wide charts with 29.

Diego Carlos should also bring some calm in possession, with his passing accuracy (88.4 per cent) dwarfing that of Clark (79.0), Lascelles (78.2) and Schar (67.3). The Sevilla man ranks second in LaLiga for passes (1,298) and sixth for forward passes (411), fitting with Howe's more progressive approach. 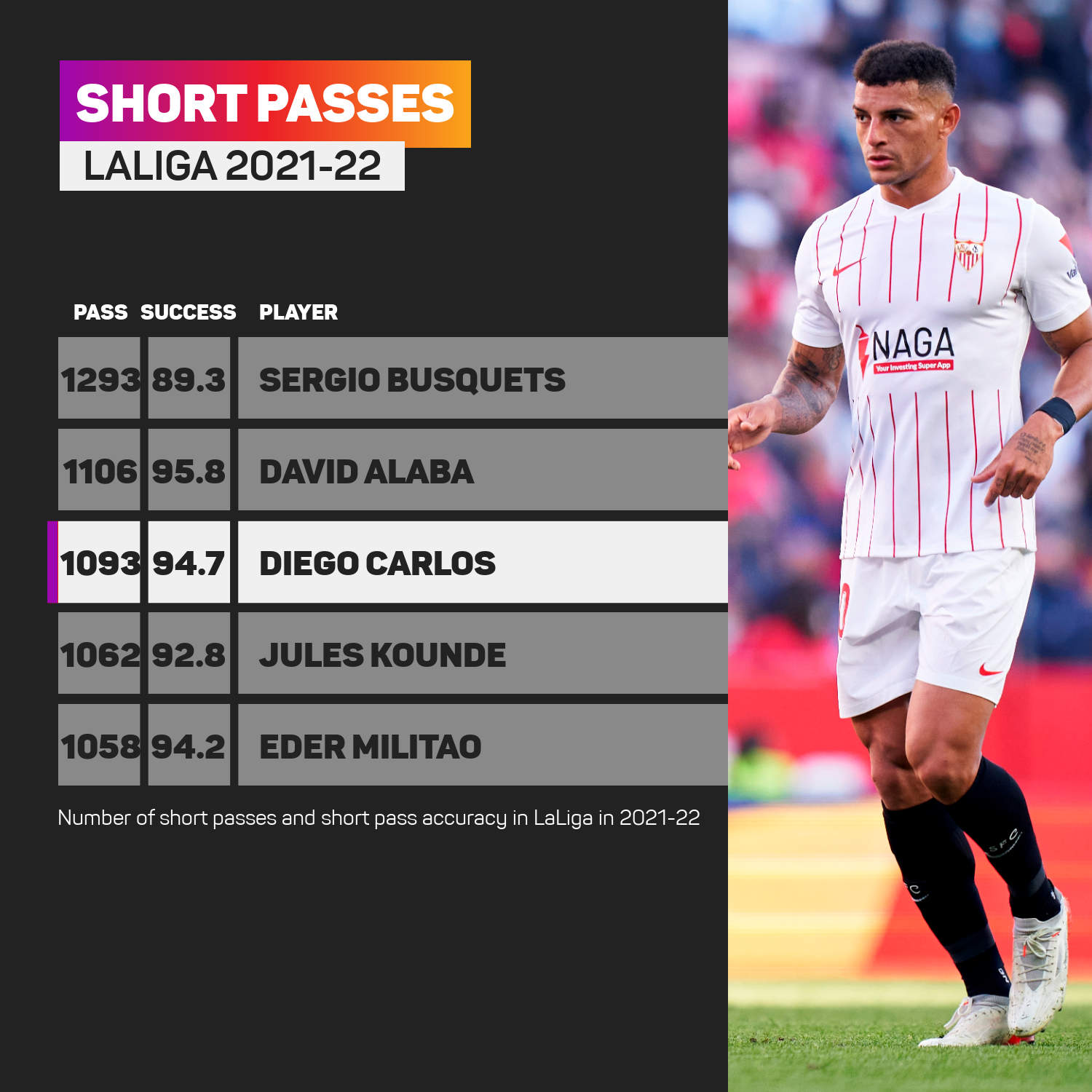 Yet Newcastle's willingness to push their bid up towards a club-record fee may well be questioned in some quarters due to the more concerning similarities with his potential new team-mates.

No player in Europe has made more errors leading to shots than Diego Carlos, with two of the five resulting in goals. Meanwhile, since joining Sevilla in 2019, he has conceded 10 penalties in all competitions – including three for fouls on current Premier League players in Adama Traore, Marcus Rashford and Romelu Lukaku.

Sevilla have only lost one of those 10 games, peculiarly, perhaps showing the difference Diego Carlos can make outside of these rash moments.

Ideally, Newcastle would not introduce more chaos into this defence, but they certainly cannot afford to do nothing. If Diego Carlos is the man they want, the pressure is on to deliver him in time for Saturday.

To grasp victory from the jaws of defeat is possibly one of the most fulfilling moments for any athlete, an achievement Lee Zii Jia now unlocked after mounting a mammoth comeback to clinch the Thailand Open title.

Stephen Curry scored 31 points in the Golden State Warriors' 109-100 win over the Dallas Mavericks in Game 3 on Sunday.