It made Thierry Henry and Tony Adams happy, and Mikel Arteta on the touchline was so excited by it all that he probably expended more energy than the Tottenham midfield.

So bravo Arsenal, bravo. A 3-1 win – their 600th in the Premier League – over Tottenham looks great on paper and proved rather fetching on grass, too, the Gunners picking off their north London neighbours at will, particularly in an embarrassingly one-sided first half.

But in essence, this was all about keeping up with the Joneses. Any significance from a sunny Sunday afternoon's Emirates Stadium stroll can only be gauged by what Arsenal, and indeed Spurs, do next.

Successive 1-0 wins over Norwich City and Burnley kept the wolves from Arteta's door after Arsenal's slow start to the Premier League season, and this derby success was received like they used to savour championships in these parts.

Record scorer Henry, sitting in the stand alongside Spotify billionaire Daniel Ek, was all smiles and giggles, while former skipper Adams, in the Sky Sports studio, gushed about "a wonderful, wonderful first-half display". The Gunners gentry were grinning, dreaming it might be the start of something.

Even Gary Neville said Arsenal had been "fantastic", and in many ways they were. 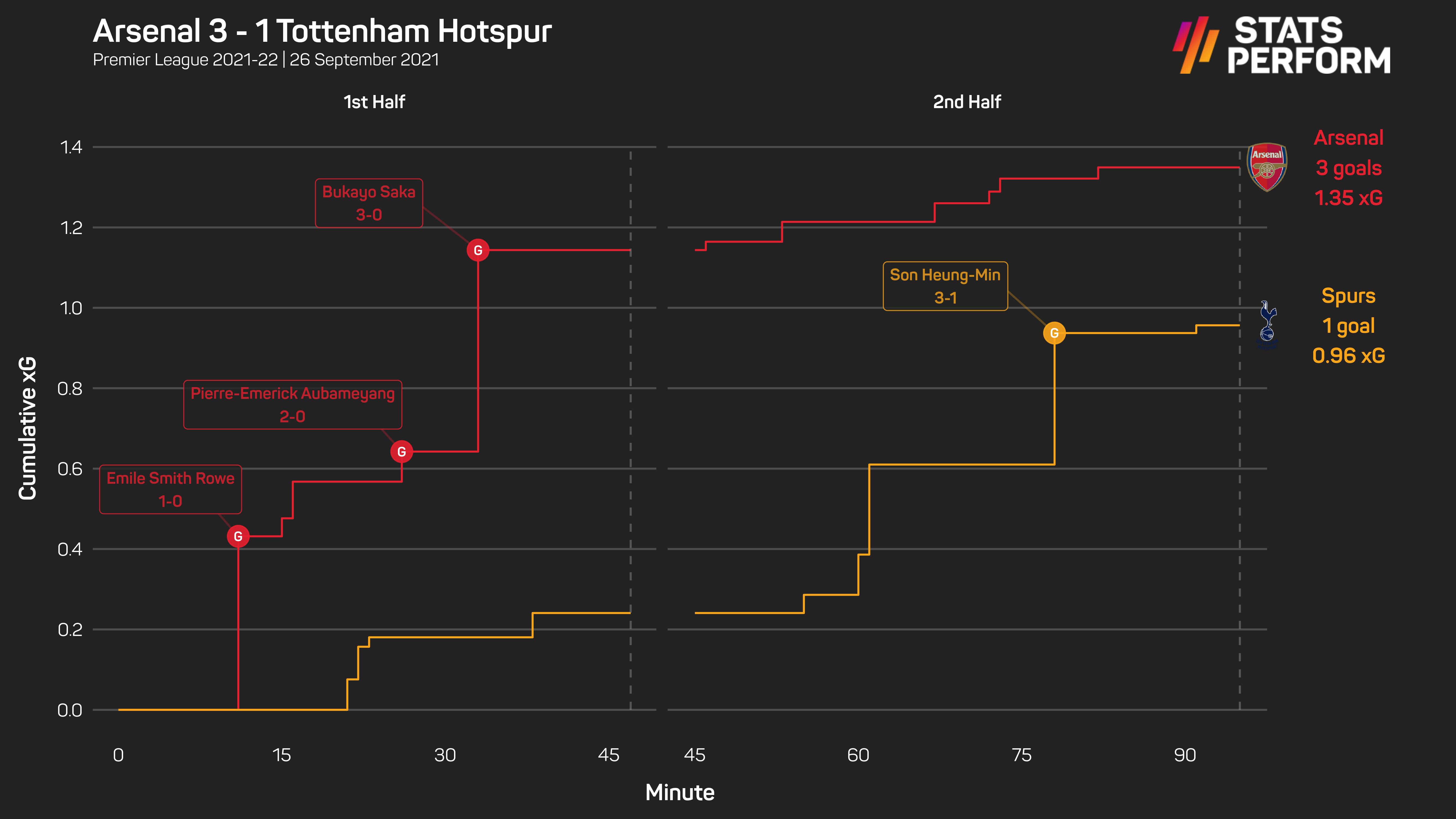 Smith Rowe wandered untracked into the heart of the Spurs penalty area to drive home Saka's low centre for the 12th-minute opener; then Aubameyang put the finishing touch to a glorious Arsenal counter-attack, Tierney to Aubameyang, on to the galloping Smith Rowe with a delicious flick, then back to Aubameyang for an unstoppable finish into the far right corner.

Tottenham were torn apart again in the 34th minute as Saka bundled his way through a desperate Spurs defence before driving a shot across Lloris.

Harry Kane had given the ball away at the other end of the pitch and dashed back to try to make amends, only to nudge Saka's attempted pass handily back into the path of his England colleague, who pounced on the chance.

Smith Rowe, at 21 years and 60 days, firstly became the youngest player to score and assist in a Premier League north London derby since Cesc Fabregas in September 2007.

Then Saka took that record outright from Fabregas, 21 days after his 20th birthday. Saka is also the youngest Englishman to score a league goal for Arsenal against Spurs since a 19-year-old Stewart Robson at Highbury in April 1984.

Son Heung-min got Spurs a goal in the 79th minute, ending their 307-minute goalless run, and Lucas Moura hit the bar in stoppage time, but this was a hiding for the visitors.

"They weren't competitive in any shape or form," said Graeme Souness, incandescent.

"Arsenal would wish they could play against a team like Spurs were in the first 45 minutes every week. Spurs were so poor."

Kane went for a Hail Mary shot from 28 yards and the Arsenal crowd gleefully jeered as the ball cleared the bar by several yards. The England captain then headed wide from a corner and another roar went up.

Aaron Ramsdale pushed aside a Kane shot that may have been drifting wide as Spurs showed more spark after the break, before the Tottenham talisman scooped a shot wide after running in behind the Arsenal defence for the first time.

He cannot buy a Premier League goal this season. Five games in and he has yet to get off the mark, but at least he had five attempts here, more than doubling his tally for the campaign. It was 2016 when he last went on a five-game goalless streak.

Aubameyang answered his own critics in style and has now scored in all three of his home Premier League games against Spurs, but Kane only fuelled the arguments of those questioning his performance this season. Dele Alli was hauled off after 45 wasted minutes, with Sky pundit Neville saying: "He needs to sort himself out." 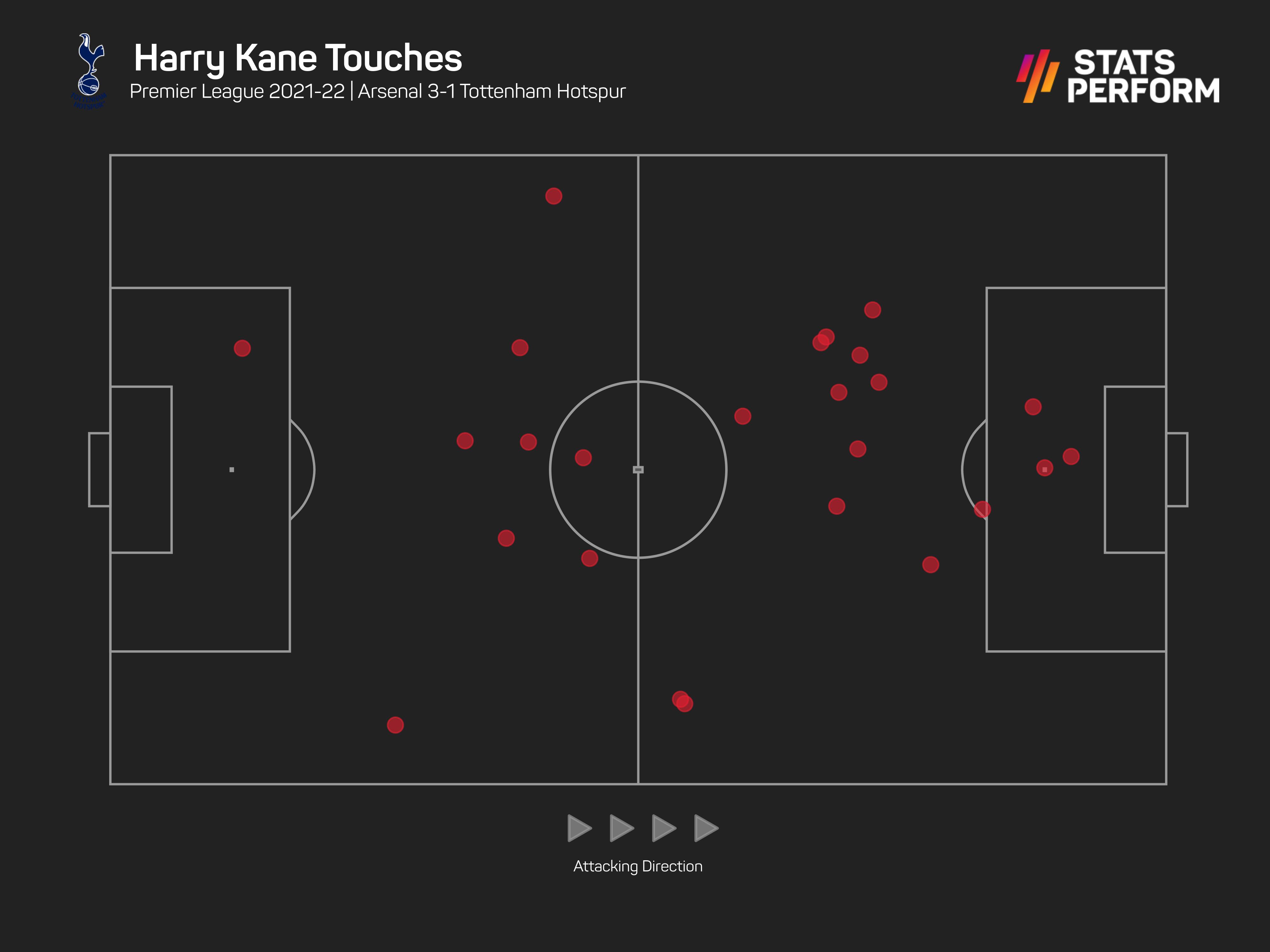 SPURS NEED TO CHANGE THEIR TUNE

Spurs have conceded three goals in three consecutive Premier League games for the first time since September 2003, and after the derby dismay against Crystal Palace and Chelsea, here was another savage reminder of their shortcomings.

They are only the second team in Premier League history to win their first three games of a season and then lose the next three, following the Everton team of 1993-94 who finished in 17th place.

So for one day at least, we might say Tottenham are in dire trouble and the future looks bright for Arsenal, despite them sitting alongside one another in mid-table.

And, of course, the CEO of Spotify fancies Arsenal. He loved the 80s mix, the 90s mix and the 2000s mix, and senses the 2020s mix could have a rocking soundtrack too, bouncing to the beat of Saka, Smith Rowe and Martin Odegaard.

Tottenham, for now it seems, are lacking punk, lacking soul, stuck on a sad-song, life-sucks loop.