Haris Rauf and Asif Ali ensured Pakistan backed up their win over India with a comfortable defeat of New Zealand.

Pakistan provided another emphatic demonstration of their T20 World Cup credentials as a superb all-round performance propelled them to victory over New Zealand.

Having crushed their great rivals India by 10 wickets to start the Super 12 campaign, Pakistan put New Zealand into bat in Sharjah and saw that decision richly rewarded.

New Zealand never adapted to the bewitching pace of Haris Rauf and Shaheen Afridi and could only post a total of 134-8.

The Black Caps fought back well with ball in hand and had Pakistan in trouble at 87-5, but Shoaib Malik (26 not out) and Asif Ali (27 no) produced a big-hitting stand of 48 to get Babar Azam's men over the line for a five-wicket win with eight balls to spare.

New Zealand's openers had been progressing well until the brilliant Rauf (4-22) got one to knick off Martin Guptill's pad and onto the stumps.

The spin of Imad Wasim and Mohammad Hafeez saw New Zealand fall to 56-3 before Kane Williamson's decision to chase a single was swiftly punished by a direct hit from Hasan Ali, the New Zealand skipper run out for 25 on his 50th game as T20 captain.

That ended a recovery from New Zealand, and Rauf made light work of the tail after extinguishing another rebuilding effort from Devon Conway (27), whose astonishing diving grab at wide long-off later claimed the wicket of Hafeez (11).

Pakistan were 63-3 at that point, and they continued to stumble in their chase until Asif clobbered Tim Southee, who had earlier bowled Babar for his 100th T20I wicket, for successive massive sixes in the 17th over. New Zealand were unable to stem the tide from there as Pakistan surged to the top of Group 2.

Rauf's figures marked his best in the shortest format as the quality of the Pakistan attack shone through again. Their bowlers conceded just three boundaries in the last seven overs, Pakistan's success in restricting New Zealand proving critical. 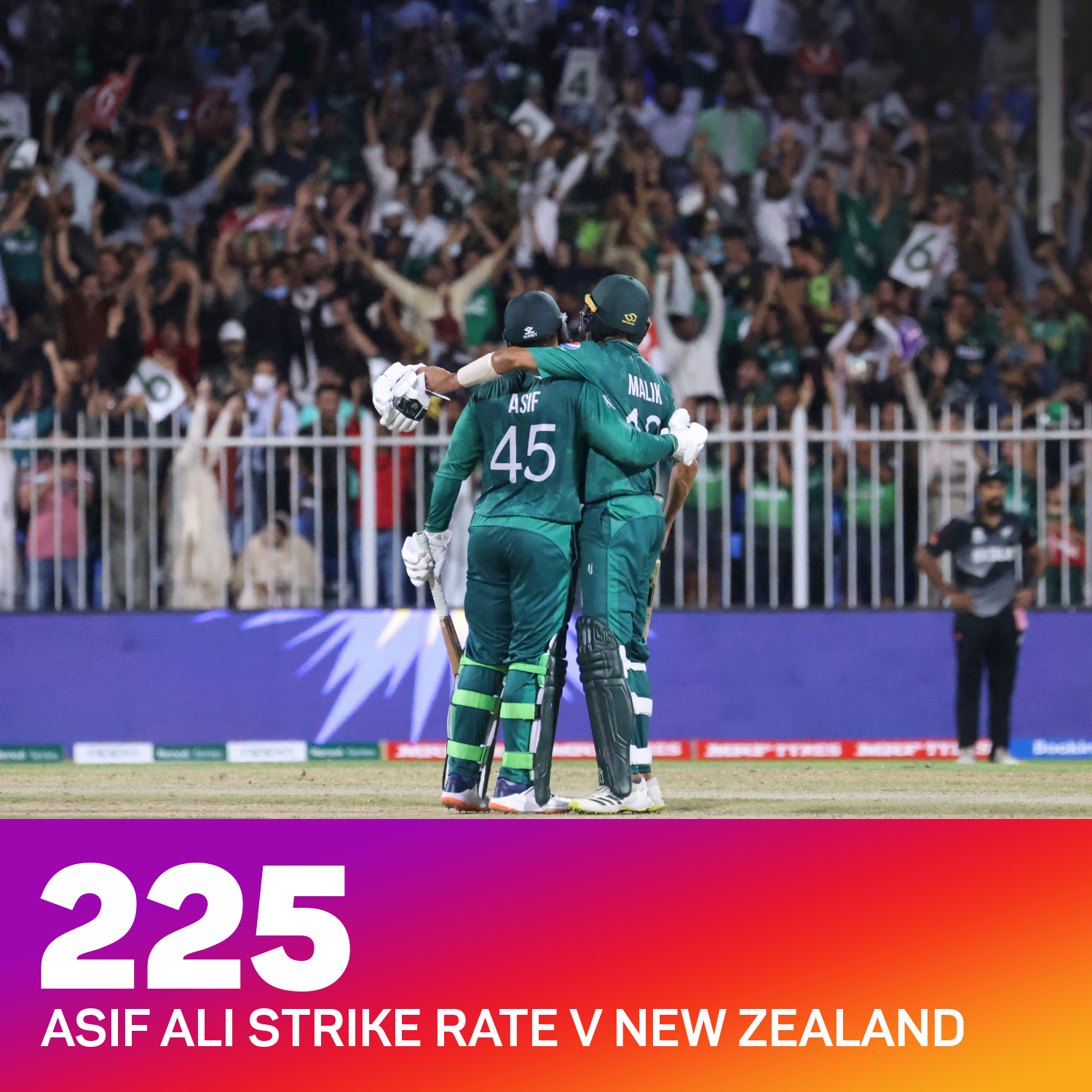 New Zealand were very much in the game with Pakistan 87-5, but Asif's devastating 27 helped take it away from them. It came off just 12 balls, his strike rate of 225.00 the highest in the tournament so far, and ensured Pakistan made it maximum points from the two toughest matches they will face in the Super 12.