Jadon Sancho's arrival at Manchester United was initially heralded as something of a game changer for Ole Gunnar Solskjaer, their right-wing problems set to be a thing of the past with the England international seemingly guaranteeing goals and creativity.

But, as it did with most other stories in football, Cristiano Ronaldo's signing took the spotlight away and it seems everyone has been focused on the Portugal talisman.

That might actually be a helpful thing for Sancho, given his start to life at United has been about as explosive as a candle. He is there, in the background, but unless you look at him it is very easy to forget his existence.

That is not to say his ineffectiveness has gone unnoticed, certainly not by supporters. But should they be concerned even this early in his United career?

'Every player has slow periods'

Digging into Sancho's form after just four Premier League appearances probably seems a little premature. Maybe it is, but his slow start is certainly a talking point from United's perspective.

There could be any number of reasons for Sancho taking a little longer to get up to speed than hoped, such as a shortened pre-season after Euro 2020, adapting to a new system and team-mates, or even a loss of confidence following his spot-kick woes in the European Championship final. 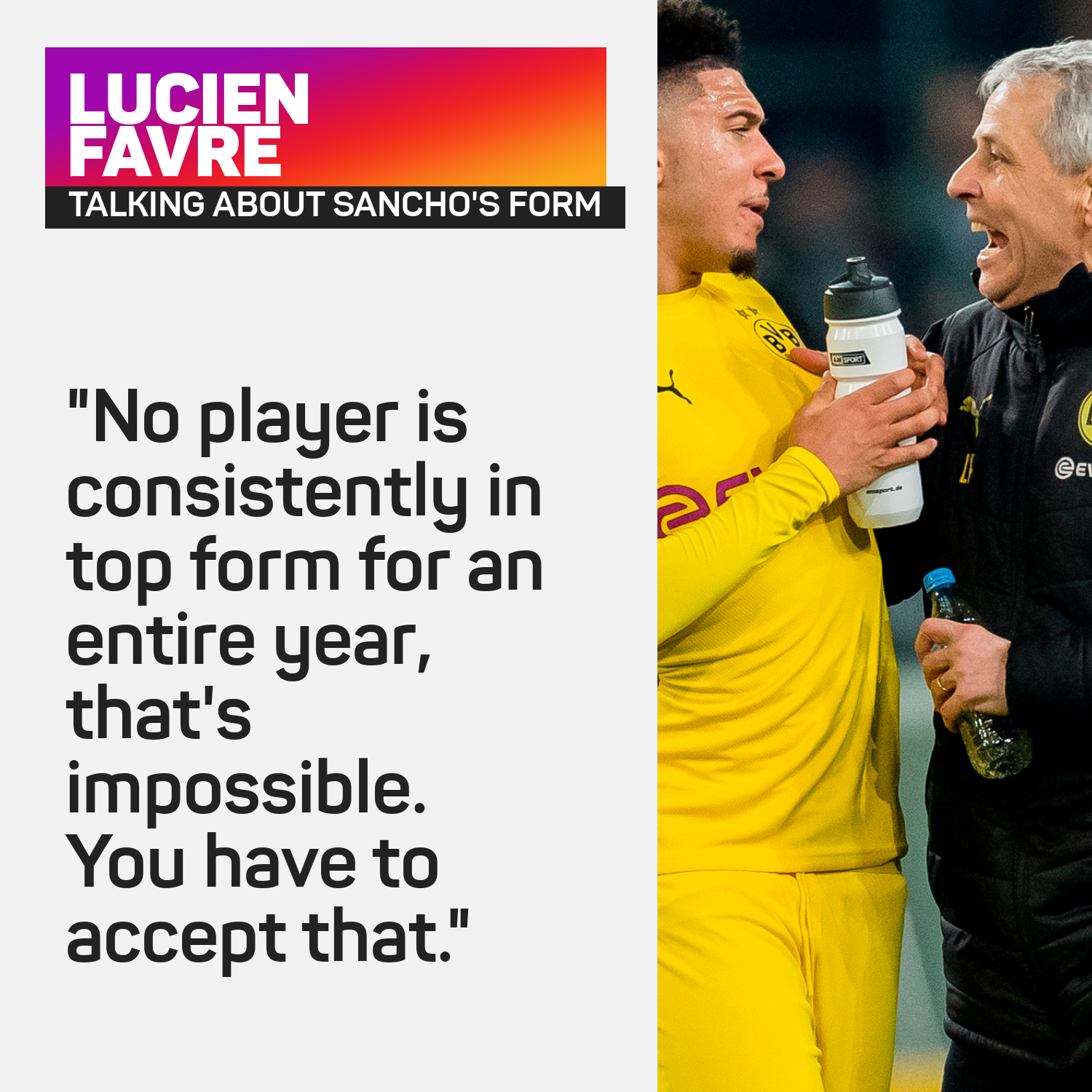 But it is worth pointing out Sancho had a similarly tricky start to 2020-21, something his Borussia Dortmund coach at the time partly put down to United's interest.

"Every player has slow periods. There was a lot of talk about Jadon during the summer – something like that can be a factor," Lucien Favre said in October last year. "No player is consistently in top form for an entire year, that's impossible. You have to accept that."

Sancho's patchy form continued all the way up to Germany's mid-season break – at that point, he had not scored in 11 Bundesliga games and only laid on three assists. It was a far cry from his breakout season the previous campaign when he netted 17 and set up another 16 – that was the standard he set. 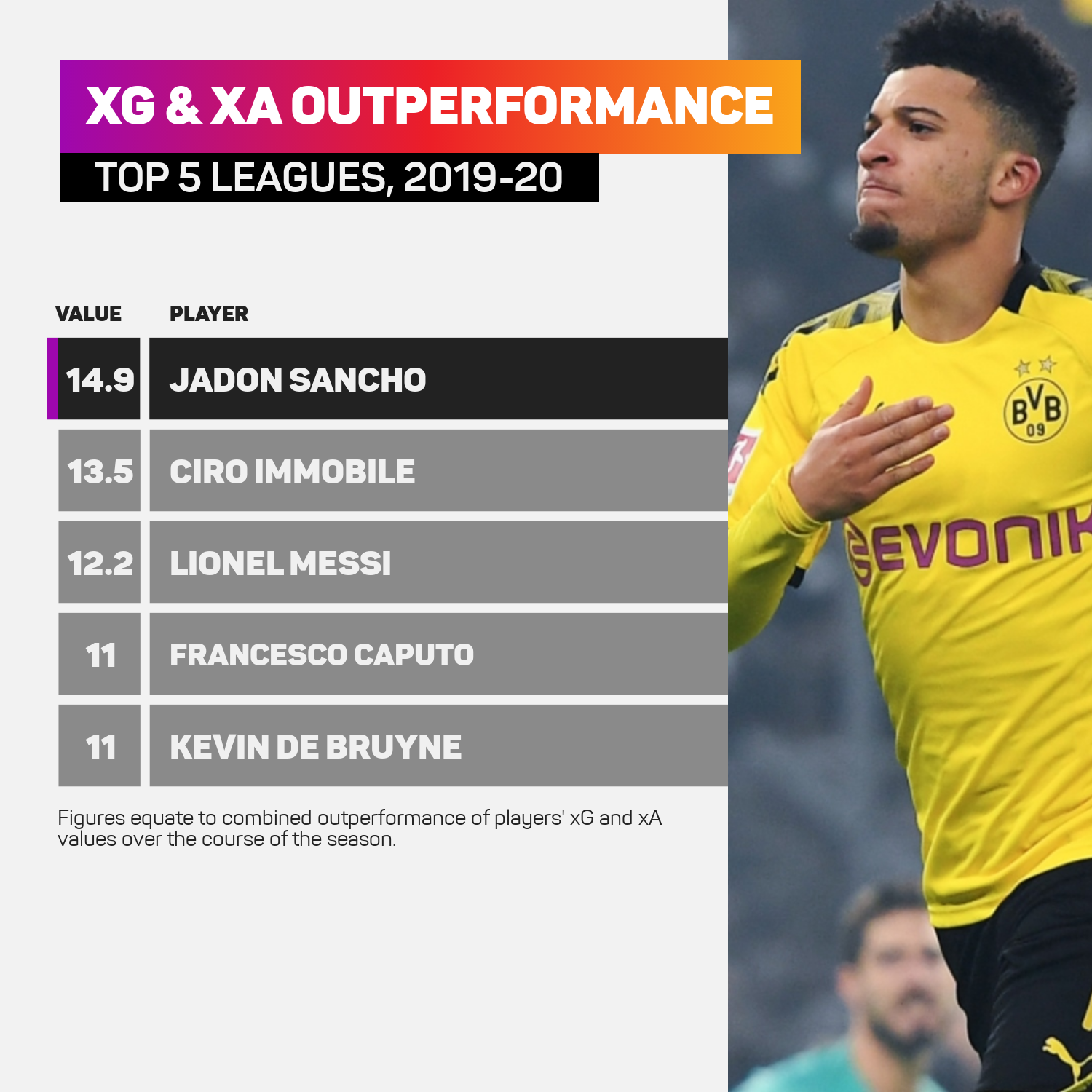 Though that in itself should have been seen as unmatchable given how much he outperformed his expected goals (xG) and expected assists (xA). In total, he was involved in 14.9 more goals than the average player would have ordinarily expected given the quality of the chances, which was the most across the top five European leagues (Ciro Immobile was second with 13.5).

It was surely unsustainable form and that was what his struggles in the first half of 2020-21 lent further credence to. But how does his form back then compare to his first steps in the Premier League?

It must be highlighted again that Sancho's first four Premier League matches represent a small sample size, so you obviously have to be a little cautious when it comes to drawing conclusions – after all, he could potentially score a hat-trick against West Ham and his record of three goals from five games would look pretty handy.

Nevertheless, Sancho's early-season numbers certainly reflect the idea he is not offering a great deal to United. In fact, in terms of productivity, he's significantly down even on that difficult first few months of 2020-21. 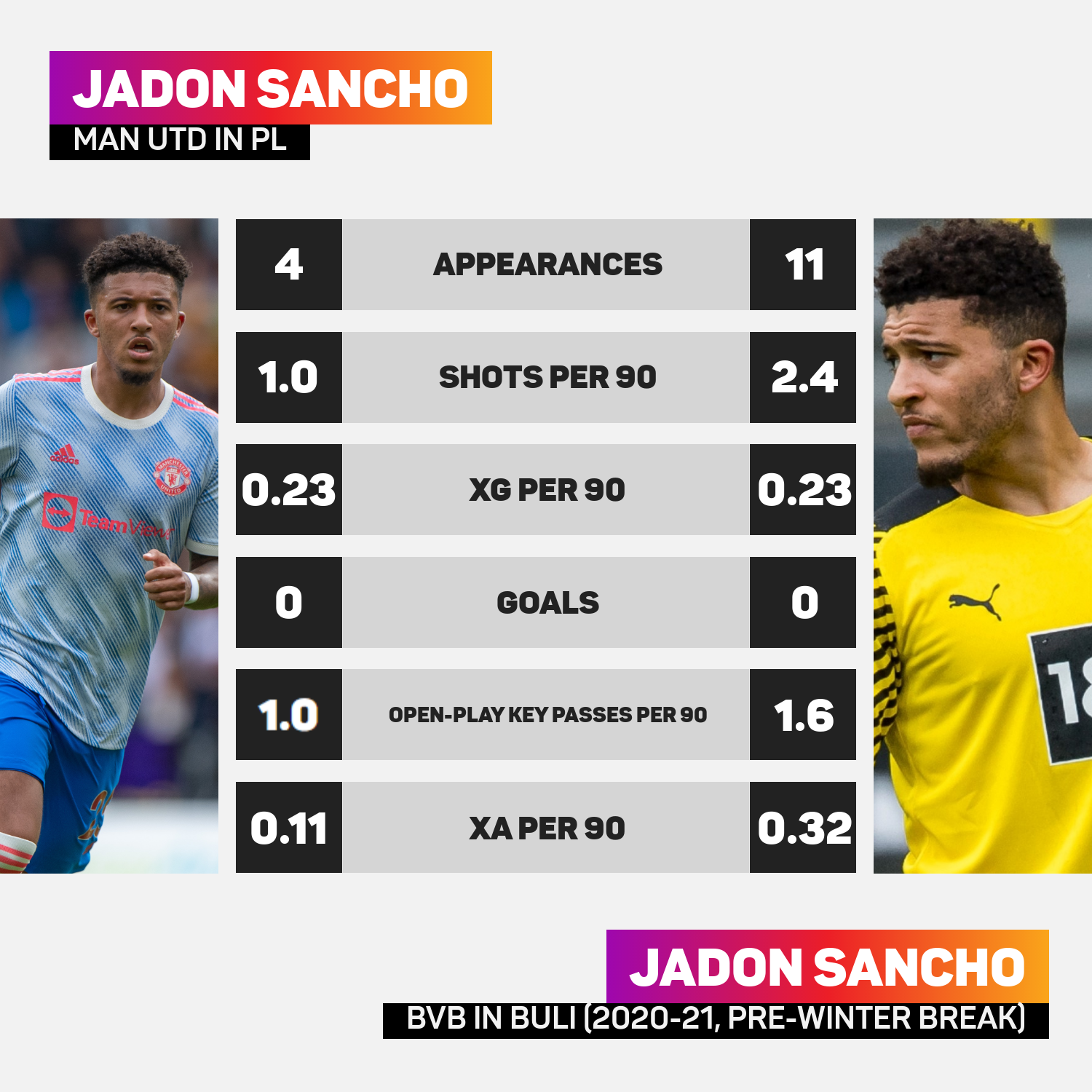 For starters, he has managed just two shots in 184 minutes on the pitch, which is obviously poor for someone brought in to be an attacking threat, particularly given he averaged 2.4 every 90 minutes pre-Christmas last season. Though there is a positive spin – some players may take hopeful snapshots in an attempt to dig themselves out of a rut, but Sancho at least is not panicking in that sense.

His stunted productivity does extend to creativity, however. Creating one chance from open play every 90 minutes, he's down on both the pre- (1.6) and post-Christmas (2.5) periods from 2020-21, and the combined quality of the openings he has crafted have not been especially threatening with an average xA of 0.11 per 90 minutes. 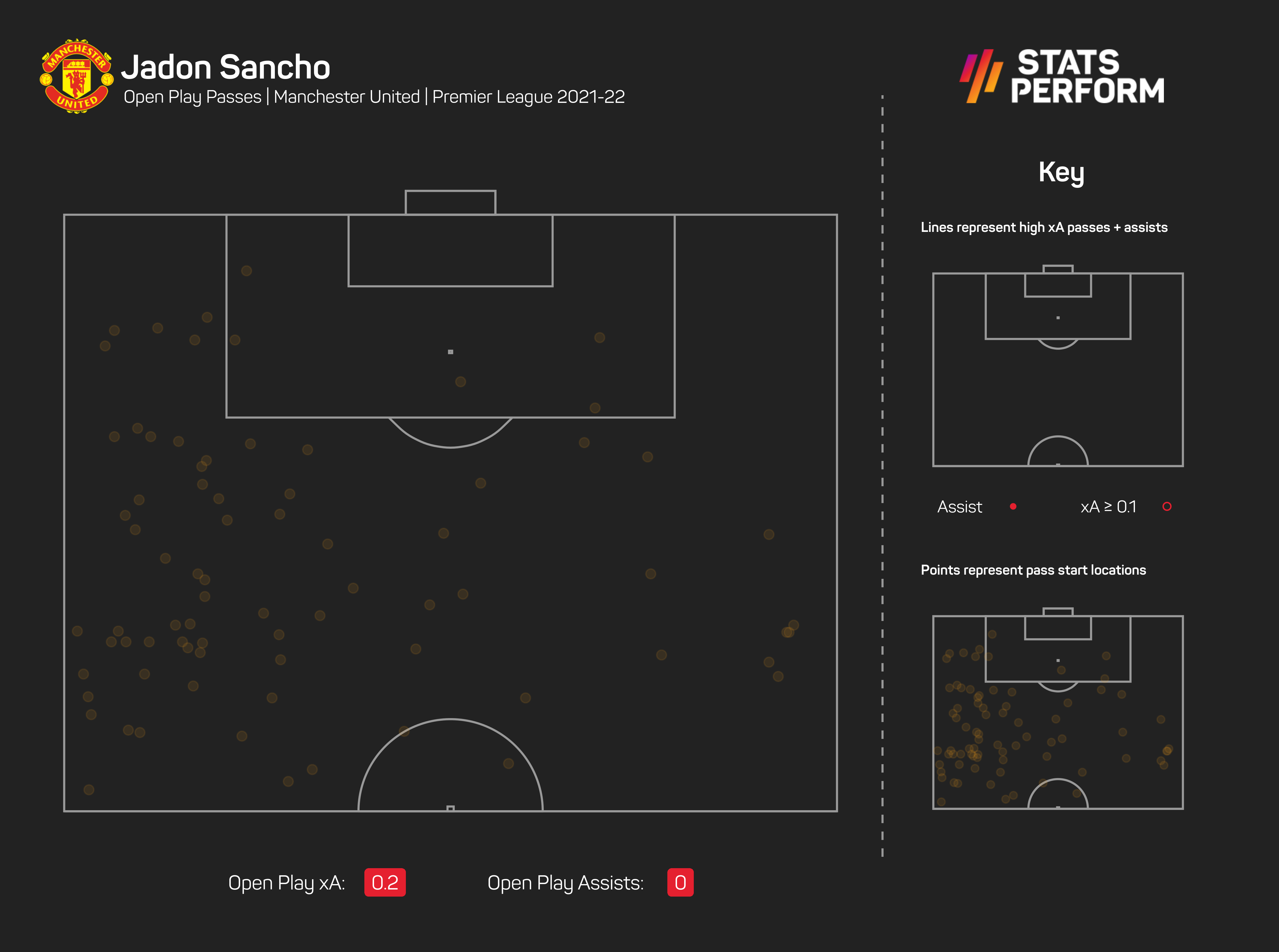 Even when deemed to be struggling last season, Sancho's xA value per key pass was almost three times as high (0.32). Of course, Sancho was in surroundings that were familiar to him and linking with players whose habits and characteristics he was more comfortable with, and there's a lot to be said for the value of cohesion, especially when things aren't going your way.

That is presumably something Sancho will have to work on even harder at United, given he has limited experience of playing with his new team-mates.

Building a natural familiarity can only be even more of a challenge when you appear devoid of confidence. We can only speculate as to why that may be the case, but it is a reasonable assumption to make that he is lacking in self-belief.

His ordeal at Euro 2020 – when he played just 96 minutes before being specifically sent on in the last seconds of extra time in the final and missed his spot-kick – and the subsequent racist abuse he suffered on social media must have had an impact on his mental state. It would be shocking if it had not, though who is to say if that is the sole cause?

What we can say is that Sancho's apparent dip in confidence seems to have manifested in a greater reluctance to take players on. He almost looks sheepish when faced up by defenders – it should be the other way round – and as such he is attempting significantly fewer dribbles.

He is touching the ball far less often (64.1 touches per 90 minutes compared to 84.8 in the first half of last season), though 64 touches hardly suggests he is being ignored by team-mates.

But there is always a chance that United players may end up looking to others if Sancho is not deemed enough of a threat – after all, his average of 4.9 shot-ending sequence involvements per game is 1.6 fewer than he managed across all of last season. 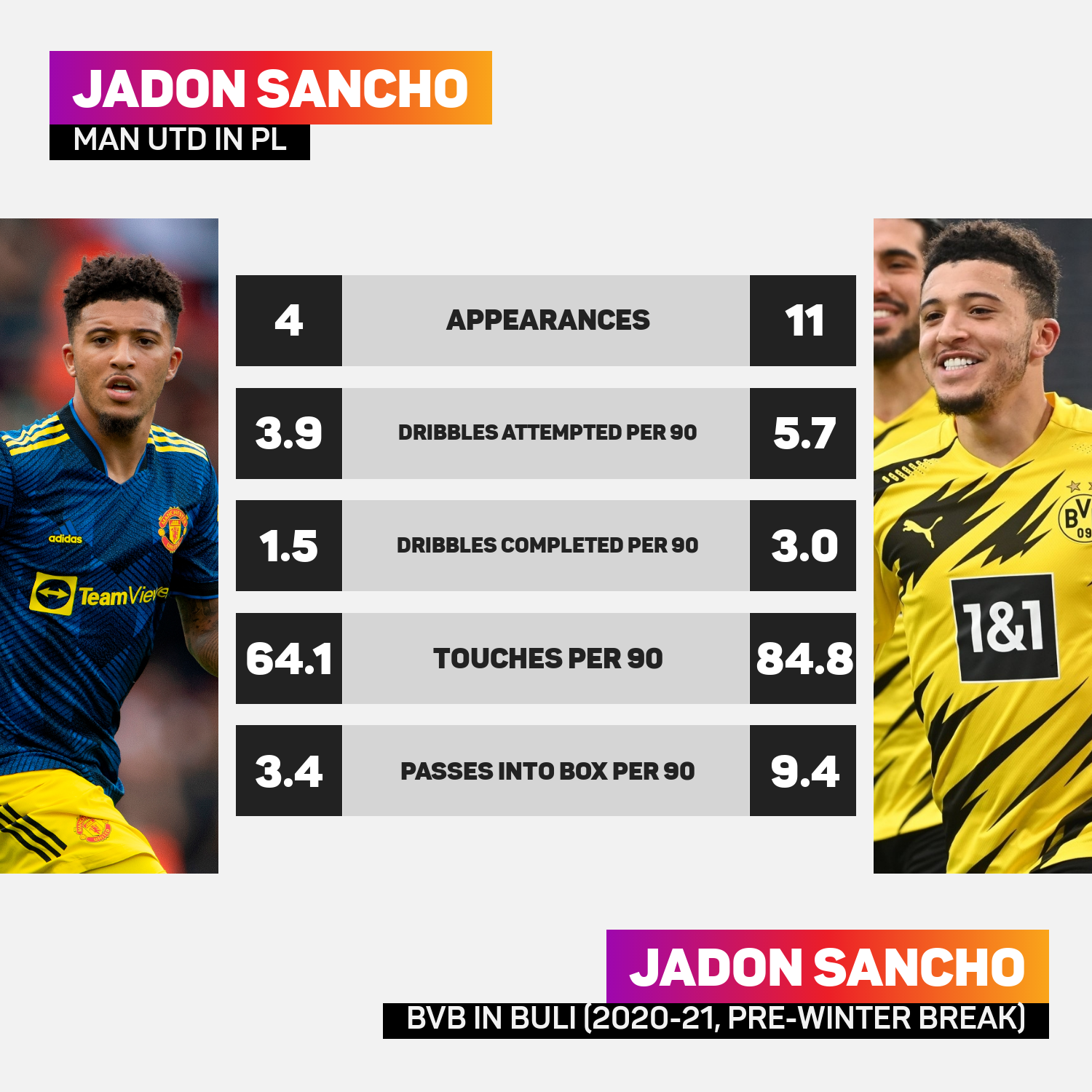 This in itself is interesting because it suggests that, although Sancho was not as much of a creator or finisher in the first part of 2020-21, his influence in the build-up remained constant over the two periods of the campaign.

Linked to that is the frequency with which he played passes (including crosses) into the box, averaging 9.4 each game pre-Christmas and 9.5 after the mid-season break. But during these early weeks with United, he is producing just 3.4 such passes every 90 minutes.

Obviously, Sancho's reasoning for this could quite possibly be that he has not seen team-mates in enough space, given most teams United face will have fairly packed defences. But fans would argue he is the sort of player who should be unlocking deep backlines either through his creativity or ability on the ball, and so far he has largely been unable to.

Nevertheless, it is still far too early for anyone to start suggesting Sancho is enduring something of a crisis. He should be afforded patience and time to build meaningful on-pitch relationships with others in the United squad.

But when it comes to attaining some confidence, Sancho might just need to take the odd leap of faith – he is playing it safe and that is not what United bought him for.