From trailblazer Luc Longley and his trophy-laden time alongside Michael Jordan in Chicago, to Andrew Bogut, Patty Mills, Aron Baynes, Matthew Dellavedova and Ben Simmons. There has been a healthy contingent of Australian stars gracing the NBA.

Josh Giddey joined the growing list of Australians in the league when the 19-year-old was taken with the sixth pick in the 2021 NBA Draft at Brooklyn's Barclays Center in July.

After reigning NBA Rookie of the Year LaMelo Ball was taken by the Charlotte Hornets with the third pick of the 2020 Draft, a player from the NBL had their name called early for the second consecutive year.

Giddey emerged as a lottery pick and was taken swiftly by the rebuilding Thunder – who missed the playoffs last season for the first time since 2014-15 – following his exploits for the Adelaide 36ers.

The teenage playmaker caught the eye of NBA executives in a season which saw him crowned the NBL's Rookie of the Year after leading the league with 7.6 assists per game, while averaging 10.9 points and 7.3 rebounds in 28 appearances.

In four preseason games for the Thunder, Giddey averaged 13.5 points, 7.0 rebounds and 5.0 assists per game.

Regarded as the best Australian prospect since three-time All-Star Simmons was drafted first by the Philadelphia 76ers in 2016, former 36ers head coach Conner Henry hailed the Melbourne-born point guard when he spoke to Stats Perform prior to July's draft.

"It's really been a rewarding experience for me as a coach," Henry said. "It's the first time I've had the opportunity to coach an elite talent at such a young age.

"I didn't really know what I exactly had coming in. I had seen Josh on film and in the Chicago camp a year earlier, when he was just a young, fairly tall, skinny kid who didn't play all that well. Carried himself confidently. You could see he played at a pace and made others around him better, but it wasn't like he stood out.

"Then you fast forward five-and-a-half/six months, he walks in and is two inches taller, 15kg heavier and he has really started to grow into his body. Then I knew I had something pretty special.

"It became pretty evident after a month and a half that he was going to be able to play - and play at a high level against grown men. As we went down that path with him, we were able to keep throwing more and more systems at him. He was very open to listening, to understanding what we're trying to put in play.

"Having played the position before, I was able to talk to him about angles. 'Do you see this window of an opportunity here when you turn a corner', 'how do you read the floor initially when you rebound the ball and pushing out on the break', these little things. I think he was well ahead of me already when I brought those things up. Really rewarding to see his growth and confidence grow daily."

Since 2012, Giddey's assists per game figure is only second to Cairns Taipans point guard Scott Machado – who averaged 7.6 in 2019-20. 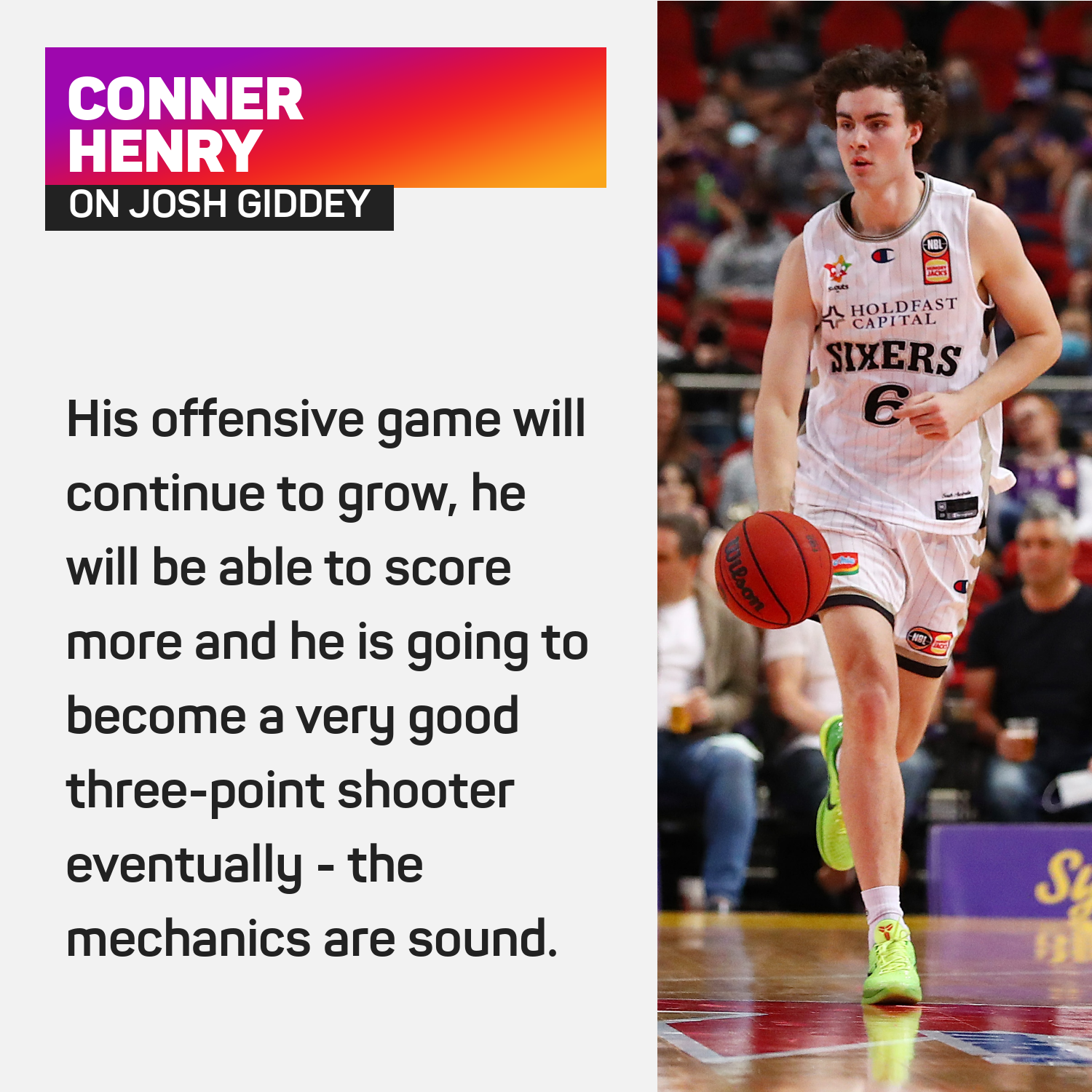 "Every player when they reach a certain level of recognition or professional ranks, they're always the best of the best as they keep going in advancing on their path. Josh wasn't satisfied. He was always pushing forward and trying to get better, always trying to connect with his team-mates and that's his greatest strength because he makes everyone around him better," Henry said as the Thunder prepare to open their season against the Utah Jazz on Wednesday.

"His offensive game will continue to grow; he will be able to score more and he is going to become a very good three-point shooter eventually - the mechanics are sound. The release off the hand has improved, he is under the ball more, the rotation has improved and it will only get better.

"At the end of the day, his true strength is his size, his feel for the game and ability to find his team-mates."

While Giddey only shot 43 per cent from the field, the teenager – who was surprisingly overlooked for Australia's Olympic Games squad – frequently demonstrated his playmaking ability, athleticism and high basketball IQ under Henry's guidance in Adelaide.

Henry – a former assistant with the Orlando Magic, having played for the Houston Rockets, Boston Celtics, Milwaukee Bucks and Sacramento Kings in the NBA – likened Giddey to fellow Australian and sharp-shooter Joe Ingles.

Ingles has become an integral part of the Utah Jazz franchise since his arrival in 2014, ranking fifth in three-point percentage (45.1 – a career high) last season. Giddey and the Thunder play the Jazz in their season opener on Wednesday.

"He'll get to a point where he will have to play harder as he matures physically," Henry said of Giddey. "He won't be able to take periodic breaks in the game and that can be managed minutes wise of course. He will have to be switched on at both ends, even more so than he was with us.

"Even at 18, he was very good but there were moments when at both ends of the floor where either we had to teach or correct him on things. He'll be fine, he will be surrounded by fantastic coaches who will push him. He likes to be pushed as a player. He will have to improve on the defensive end. I think he will become a good defender.

"I look at some of the Aussies in the league right now, Ingles isn't this elite athlete that is running up and down, high flying and dunking on people. Josh is that similar kind of Ingles body type. Plays at a good, sound speed, has good strength, uses his length wisely on both ends of the floor and Josh will get better and better in that part of the game in how to adjust and play both offensively and defensively."

Henry added: "Josh has been used to be playing in FIBA rules. Now he will be playing in NBA rules. With the defensive rules in place with the NBA, you can't pack the paint like you can in FIBA, where you can really load up. That, coupled with the ability of the offensive players to have more freedom of movement, where in FIBA it's quite physical.

"In the NBL, freedom of movement can be impeded quite a bit with a hand check, body check or hold. Josh is going to have even more success in the pick-and-roll game at the NBA level. He had very good success with us.

"I think his height, ability to see the floor and ability to make team-mates better, in the NBA rules, are only going to compliment his game and help him grow."