Fati signed a new six-year contract to keep him at the club until 2027, with a release clause of €1billion included - a week after Pedri had penned a similar extension with the Blaugrana.

The Spain international burst onto the scene after making his debut in August 2019, becoming the club's youngest ever LaLiga goalscorer at the age of 16 years and 304 days.

He is also the youngest scorer in Champions League history, after netting against Inter in December 2019 a minute after his introduction from the bench.

The 18-year-old inherited the number 10 shirt after the departure of Barca great Messi, who left on a free transfer for Paris Saint-Germain amid salary cap issues with LaLiga in August.

However, Fati insisted that no pressure comes with the famous shirt as he expressed his desire to succeed with his boyhood club after coming up through the La Masia academy.

"My dream has always been to succeed here and continue growing here, luckily I will continue to do so," Fati told reporters on Thursday.

"I'm going to work every day to improve as a person and as a player. I have not done anything yet, I must continue working, mark my path.

"I am very grateful to the club for having trusted me, along with the captains. It could have been worn by another player, but I'm grateful.

"I was ready because they are at Barca and at Barca you must be prepared for everything. Wearing the '10' is not a pressure, it is one more motivation, I will do the best I can." 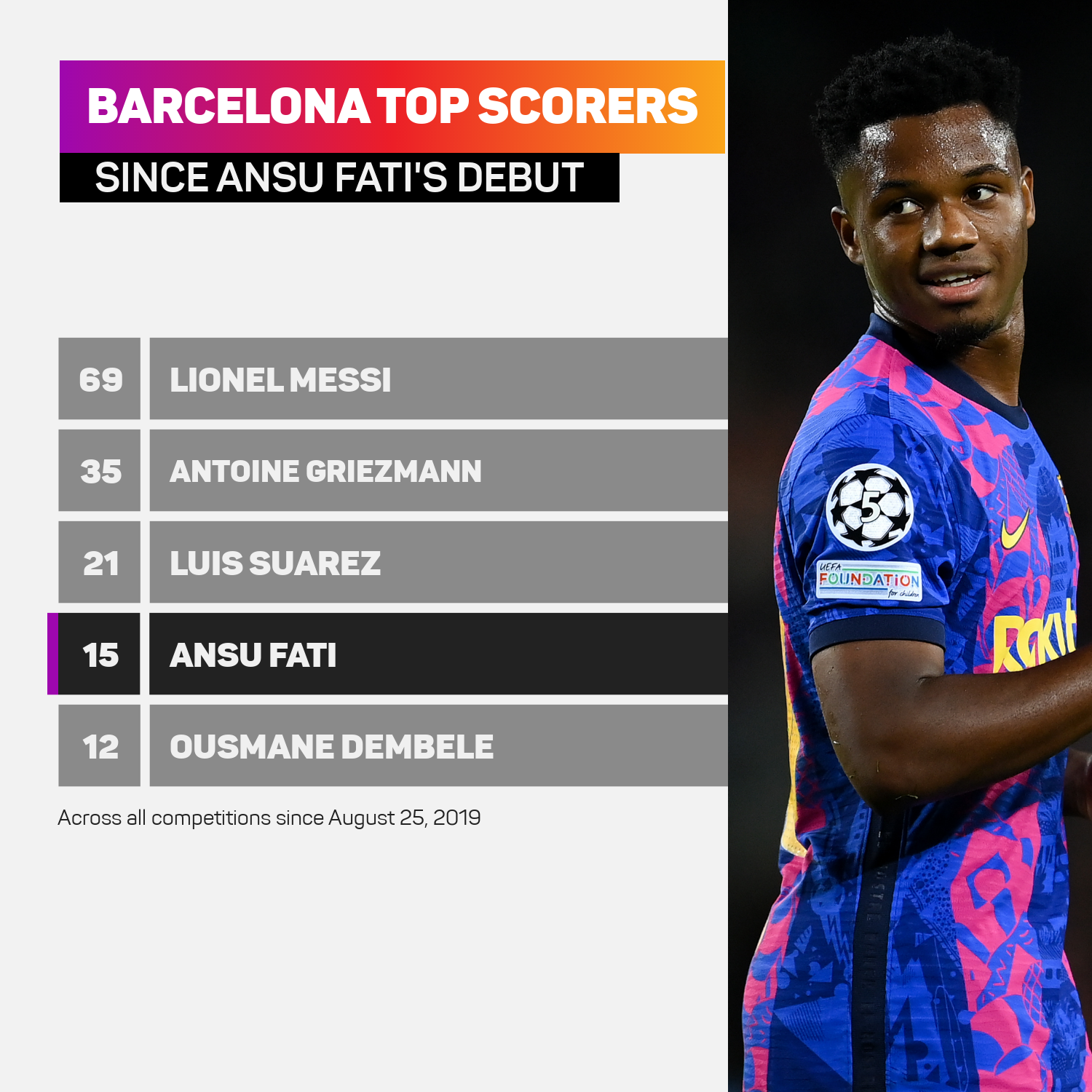 An almost year-long injury lay-off could have stunted the youngster's development, but he has managed two goals in five appearances since returning in September.

He has registered 15 goals in 48 games for the LaLiga giants in total, a tally that is bettered only by Luis Suarez (21), Antoine Griezmann (35) and Messi (69) – none of whom are still at the club – since his senior debut.

But Fati explained his ambition to keep improving at Barca, who are preparing for a Clasico showdown against Real Madrid on Sunday.

"I have a lot of room for improvement, especially listening to people who can help you," he continued. "I would like to improve everything, I have not done anything yet, with work.

"Playing a Clasico is a motivation, Madrid is our great rival. I know that the team is going to give everything for the victory.

"I trust the team, it is true that we have to improve as always. We are going to go out and compete and play at home, which is a factor in our favour."

A-League: Two from two for Popovic and Victory

Rumour Has It: Man Utd hopeful of Rangnick edge in Haaland pursuit

Ralf Rangnick and Erling Haaland have a pre-existing relationship from their time working together at Salzburg.

Abel Ferreira cited the frenetic schedule in Brazil as he considers his future despite winning the Copa Libertadores.

The Phoenix Suns extended their winning streak to 16 games with a strong victory over the Brooklyn Nets.

James Harden has had an inconsistent start to the new NBA season, registering a triple-double on Saturday but also having seven turnovers.

George Kambosos Jr stunned the previously undefeated Teofimo Lopez with a split decision victory after a first round knockdown.

Suns down Nets to extend winning streak to 16 games, Embiid returns with 42 in 76ers' 2OT loss

The Phoenix Suns claimed a 16th consecutive victory as the Brooklyn Nets struggled with 20 turnovers for the game.

Joel Embiid revealed the brutal severity of his COVID-19 experience after scoring 42 points in his return after nine games out.

Juventus are the subject of an investigation from police in Turin.