Dortmund will not whine about Haaland's absence, claims Rose

Erling Haaland is going to be out for several weeks with a hip flexor injury, and Marco Rose knows Borussia Dortmund will miss the striker.

Marco Rose is under no illusions as to the importance of Erling Haaland to his team, but insisted Borussia Dortmund will not "whine" about the star striker's absence.

Dortmund coach Rose confirmed last Friday that Haaland would be out for several weeks due to a hip flexor injury.

Haaland has scored 13 goals in 10 appearances across all competitions so far this season, having missed three matches due to a muscular problem. He returned to feature in a 3-1 win over Mainz on October 16, netting twice.

The 21-year-old's absence was not felt as Dortmund claimed a 3-1 win at Armenia Bielefeld on Saturday, with Rose's team sitting second in the Bundesliga.

A home match against Ingolstadt in the DFB-Pokal comes up next on Tuesday, though Haaland was the main subject of Rose's pre-match news conference.

"Erling is incredibly important for us and we miss him, no question," said Rose.

"I once said that we would have to reinvent ourselves [in his absence]. But we don't have to do so by that much. We will not start all over again.

"We might not have Erling's physique up front now, but we have other types of players. In Bielefeld, we played with three strikers and had different ideas.

"We'll be happy when Erling does come back. But again, we have to get used to [his absence] for a few games now. So we shouldn't whine about it but find solutions and we are currently working on that right now." 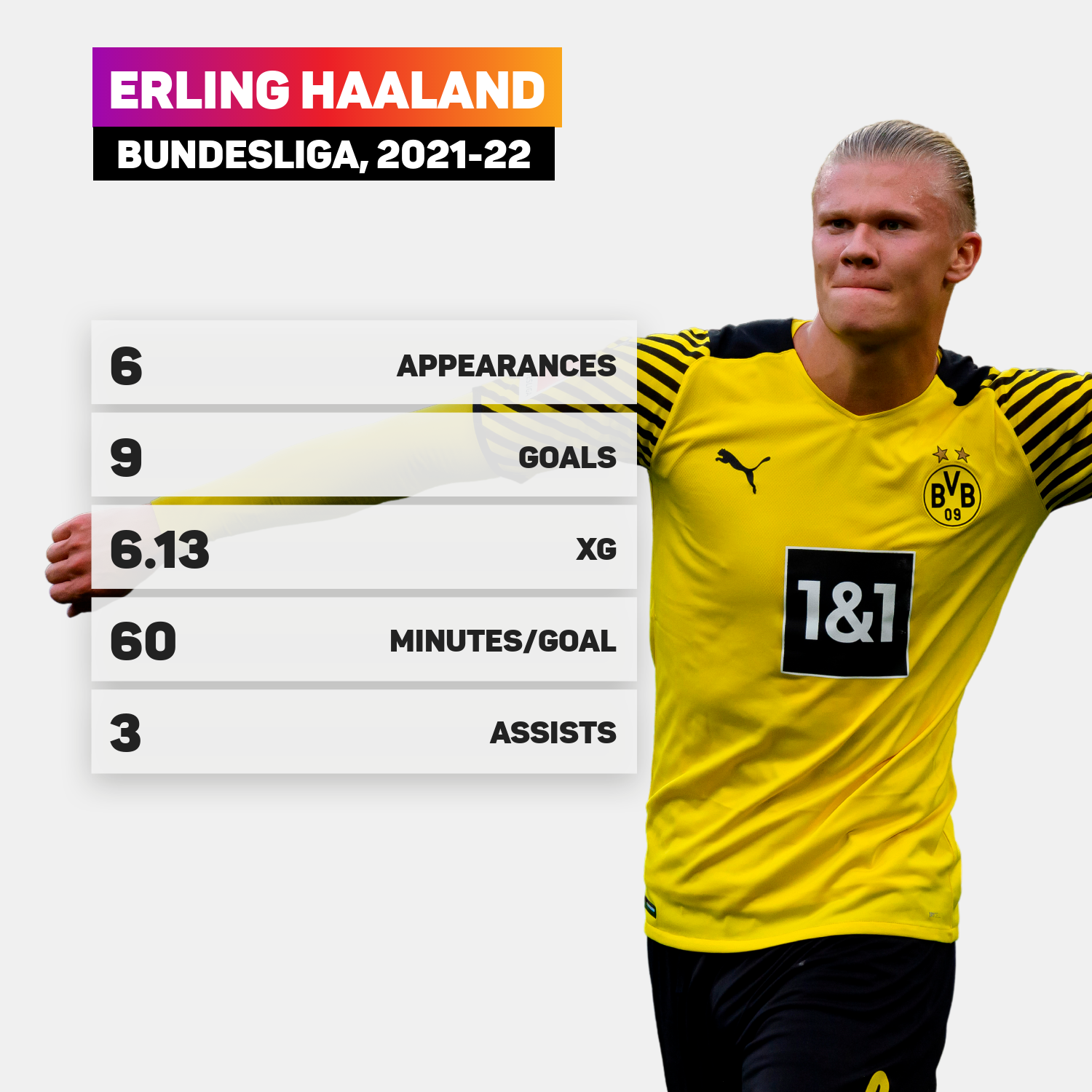 Haaland has scored nine league goals already this season, averaging a strike every 60 minutes in the Bundesliga.

The Norway international has had 30 shots, registering a 30 per cent conversion rate, outperforming his xG of 6.13 by some distance. Haaland has also stepped up creatively, already providing three assists, the joint-highest in Rose's squad alongside Marco Reus.

Donyell Malen replaced Haaland up top against Bielefeld, though failed to get on the scoresheet from two attempts, one of which was a missed opportunity in the eighth minute from what was Dortmund's second-best chance of the game from open play, according to Opta (xG value of 0.232).

Malen arrived from PSV in the close-season, but in nine Bundesliga games, he is yet to find the net, from 11 attempts in total.

Reus is another option in a central role, though the Dortmund captain is usually at his best deployed as one of the wide attackers in Rose's 3-4-3 or 4-3-3 systems.

The experienced forward leads Dortmund for chances created (16) but has scored just two goals, slightly underperforming his xG (2.26) in his eight Bundesliga appearances so far.

Youssoufa Moukoko could be utilised, however, he has only played 78 minutes across five league matches under Rose. The teenager became the youngest ever Bundesliga player when he made his debut in November last season, before becoming the competition's most junior scorer the next month.

After Ole Gunnar Solskjaer's departure, Manchester United have announced Ralf Rangnick will take charge until the end of the season.

Due to coronavirus regulations in Melbourne, it remains to be seen whether Novak Djokovic will feature at the Australian Open.

Rumour Has It: Man City want Madrid's Benzema, Bayern to battle for Chiesa