Michael Jordan has company at last.

The Chicago Bulls legend was for a long time the only player to average more than 30 points per game in the NBA playoffs, yet Luka Doncic is now writing his own name into the history books in Dallas.

The Mavericks superstar has a long way to go before he can come anywhere close to matching Jordan's achievements, but he has been spectacular in scoring 32.7 points per game through his first four postseason series.

Not only is Jordan (33.4 points per game) the sole player to top Doncic's mark across a playoff career, he alone since 1963-64 joins the former EuroLeague sensation in scoring more than 750 points over his first 23 postseason games (823 for Jordan, 751 for Doncic).

These look to be early steps in a truly great NBA career for Doncic, and he could yet end this season as a champion.

The Slovenian was outgunned taking on the Los Angeles Clippers on his own in the first round in consecutive years, but the Mavericks made bold moves this year – most notably appointing Jason Kidd and trading away Kristaps Porzingis – and are now in the Western Conference Finals.

Although Doncic averaged 32.6 points as the Mavericks beat the Phoenix Suns in the second round, he crucially had help, now surrounded with defense and shooting.

Dallas held the Suns to their three lowest points totals of the season (94 in Game 3, 90 in Game 7, 86 in Game 6), while Doncic and Spencer Dinwiddie became the first team-mates to each score 30 points in a Game 7 since Los Angeles Lakers greats Kobe Bryant and Shaquille O'Neal against the Sacramento Kings in 2002.

As the tournament heats up, Doncic will need all the assistance he can get – but any Mavericks title run surely depends on their main man being the best player in every series.

That becomes a little tougher when Dallas are faced next with playoff veterans the Golden State Warriors.

This is the 10th year of the Steph-Klay-Draymond Warriors, in which time they have been to five NBA Finals, won three championships and seen off a whole host of superstars.

There are plenty of examples for Doncic to learn from then as he prepares to take on the greatest team of the past decade.

Ja Morant, who scored 35 points against Golden State in last year's play-in tournament, averaged 38.3 points across three games in the 2022 second round until a knee injury ended his series and, ultimately, the Memphis Grizzlies' season. That is the highest mark posted against the Warriors in the past 10 years, albeit with a limited sample size.

Among those to play 10 or more games, James (33.0 points per game) leads the way. Equally as impressive, the four-time MVP has the most total playoff points versus the Warriors since 2012 (727) – despite spending the bulk of his career in the Eastern Conference. 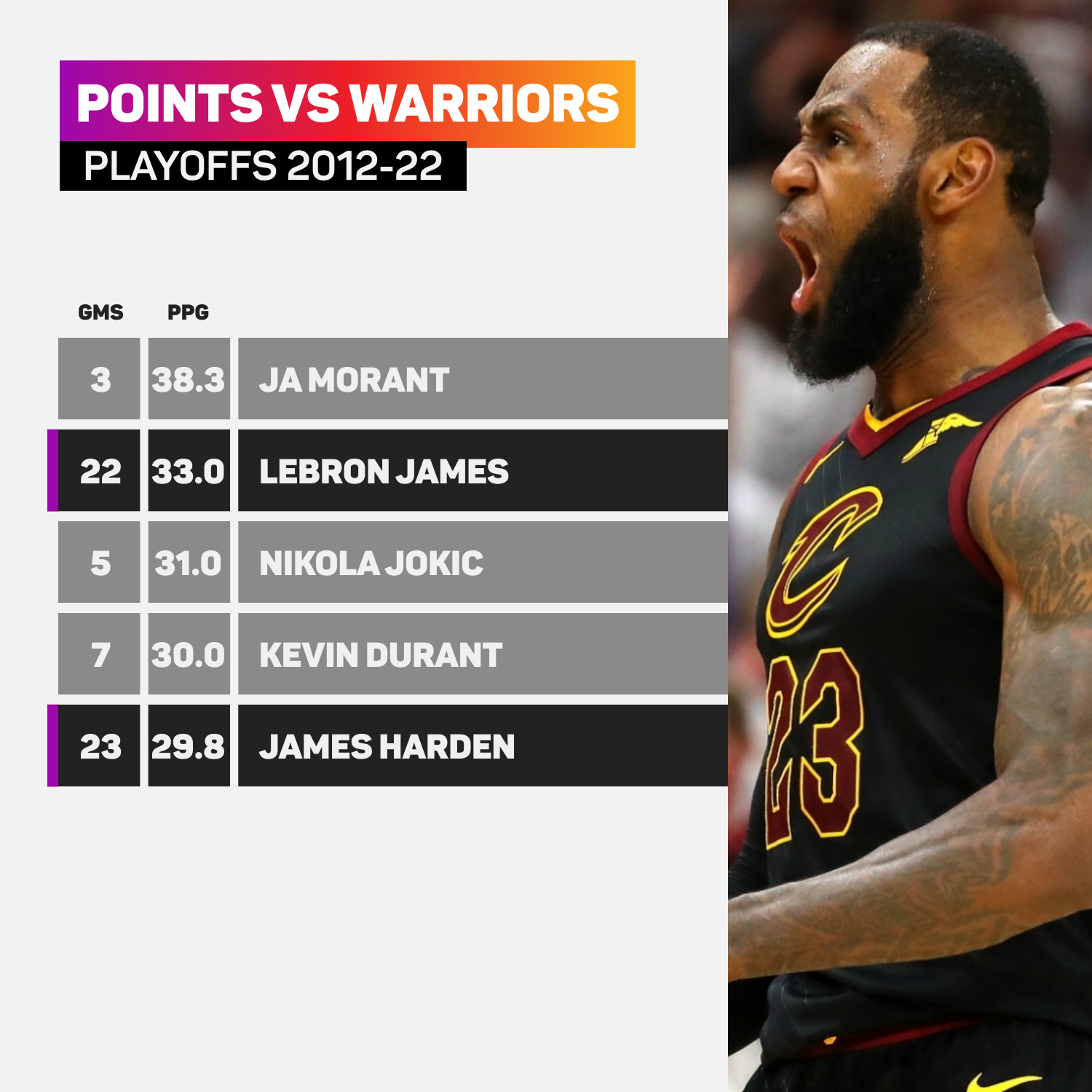 James did score 22 in a Lakers play-in win over the Warriors in 2021, but all of their 22 postseason encounters have come across four Finals series. Unfortunately, while James has excelled, his teams have not fared quite so well.

James had a little more help in 2016 – we'll come on to that – and the Cavaliers' various failures perhaps best illustrate the folly of Doncic attempting to take on a super-team alone.

The 51 points James scored in Game 1 in 2018 were the most against the Warriors in a single playoff game in the past 10 years, but he was let down by his team-mates – we're looking at you, J.R. Smith – and Cleveland not only lost that series opener but were then swept.

Harden's playoff career is best known for his repeated failures to get the better of the Warriors, losing all of his four series against Golden State while on the Houston Rockets, yet only James has scored more points in such matchups since 2012 (685).

Counted among Harden's 23 postseason games against the Warriors in the past 10 years – only Iman Shumpert (24) has played more – are three 41-plus-point performances. James alone can top that (five games).

However, Harden has also failed to reach 20 points on five occasions, twice shooting worse than 20 per cent from the field in 2015. Consistency is the key at this time of year, and Harden has not had that.

The Rockets blew their biggest opportunity to make a first Finals since 1995 in 2018, when they led the Warriors 3-2 in the Conference Finals before Chris Paul went down injured. Houston lost Game 6 and Game 7, collapsing dramatically in the first of the two defeats as Harden did not contribute a single fourth-quarter point.

Given Irving was the Cavaliers' second man behind James, it is difficult to draw a direct comparison with Doncic. But the point guard's performances show the sort of levels Dinwiddie or Jalen Brunson may have to reach to beat the Warriors if they are at the top of their game.

Irving's 2015 Finals debut ended in Game 1 when he sustained a fractured kneecap, but he returned in 2016 and played a huge role in the Cavaliers' historic win.

Cleveland were trailing 3-1 heading into Game 5 – a deficit that had never previously been overturned – only for Irving and James each to score 41 points, becoming the first team-mates to both top 40 in a Finals game. Irving shot 70.8 per cent from the field.

As the Cavaliers recovered to win 4-3, with Irving shooting a decisive three late in Game 7, his usage rate was a lofty 30.7 per cent for the series, taking responsibility off James' shoulders. Brunson is the Mavericks' second man, although his usage rate of 29.7 per cent was boosted a little by playing three games without the ball-dominant Doncic.

If nothing else, Lillard and the Portland Trail Blazers provide an example of how not to play the Warriors. Only former Blazers team-mate Rodney Hood (0-12) has a worse record in playoff games against Golden State in the past 10 years.

A 43.7 per cent career shooter, Lillard has averaged 38.7 per cent from the field against the Warriors in the postseason. Sure, he has scored 27.6 points, but it has taken him 22.1 field goal attempts per game.

When Steph Curry and Klay Thompson are on the other side of the floor, you cannot afford to be so inefficient. Lillard's sole victory in 2016 came courtesy of his one 40-point performance – while Curry was out injured.

Only Allen Iverson (26.5) and Jordan (25.1) have attempted more field goals per playoff game than Doncic (24.3), so there is definitely scope for the Warriors to profit if he cools off – not that there has been a great deal of evidence to suggest that is likely.

The man who has occupied Doncic's playoff nightmares in the previous two seasons surely provides the blueprint for how to enjoy postseason success against the Warriors.

Leonard has played on two of the four teams to eliminate Golden State from the playoffs in the past 10 years; he has not lost a series to the Warriors – missing the entirety of their 4-1 defeat of the San Antonio Spurs in 2018 – and boasts the best winning percentage of any player to face Steve Kerr's winning machine on more than 10 occasions over this period.

The 2019 Finals showed the sort of standard that has been required to get the better of the Warriors in the past decade, with Leonard dominant as the outstanding player on the Toronto Raptors. He led the Raptors in points (171), rebounds (59) and steals (12) versus the Warriors, ranking second in assists (25) and blocks (seven). 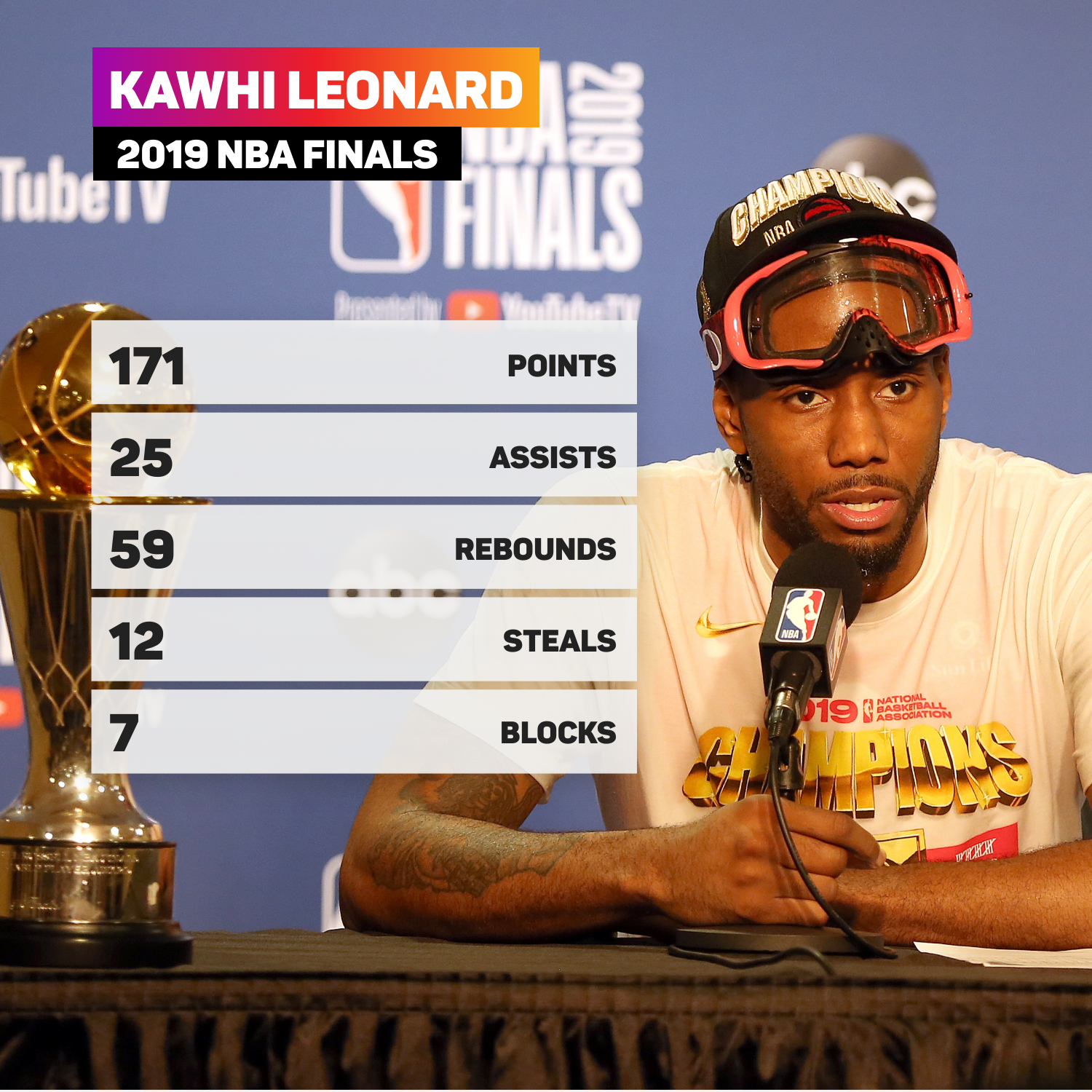 Doncic made strides on defense over the course of the Suns series, but whether he is capable of such an all-round display is very much up for debate.