'Too many mistakes' – Pioli demands better as Milan suffer another defeat

Milan were punished for failing to build on a strong start as they lost against Sassuolo, who took advantage of a team who lacked focus.

Milan head coach Stefano Pioli admits he is seeing diminishing returns from his team after they crumbled to a 3-1 defeat against Sassuolo at San Siro.

A dismal day for the Rossoneri was bookended by moments of mixed fortune for Alessio Romagnoli, who scored the opening goal to put Milan ahead before being sent off late in the game, by which time Sassuolo had their winning lead.

Gianluca Scamacca and Domenico Berardi scored with excellent strikes for Sassuolo, either side of a Simon Kjaer own goal, as Milan struggled to keep pace with lively visitors.

Pioli's team finished second last season, after being overtaken by an Inter side who were relentless after chasing their city rivals off top spot. Milan went unbeaten for their first 15 games of the 2020-21 Serie A campaign and similar looked on the cards this time when they avoided defeat in their opening 12 fixtures.

Successive defeats to Fiorentina and now Sassuolo have checked that progress though, and Inter are on their heels, with Napoli right in the mix too.

Speaking about his side's performance against Sunday's mid-table visitors, Pioli said: "We lacked clarity, we made too many mistakes, especially in the opposition area.

"In the first half we got into their area many times and we missed the last pass. Clearly we had to manage the lead better. The first few minutes after scoring the goal were very important and instead we made a mistake for which we paid dearly."

Milan stood off Scamacca, who from 25 yards sent a scorching drive into the top right corner, finding the net off the underside of the crossbar. 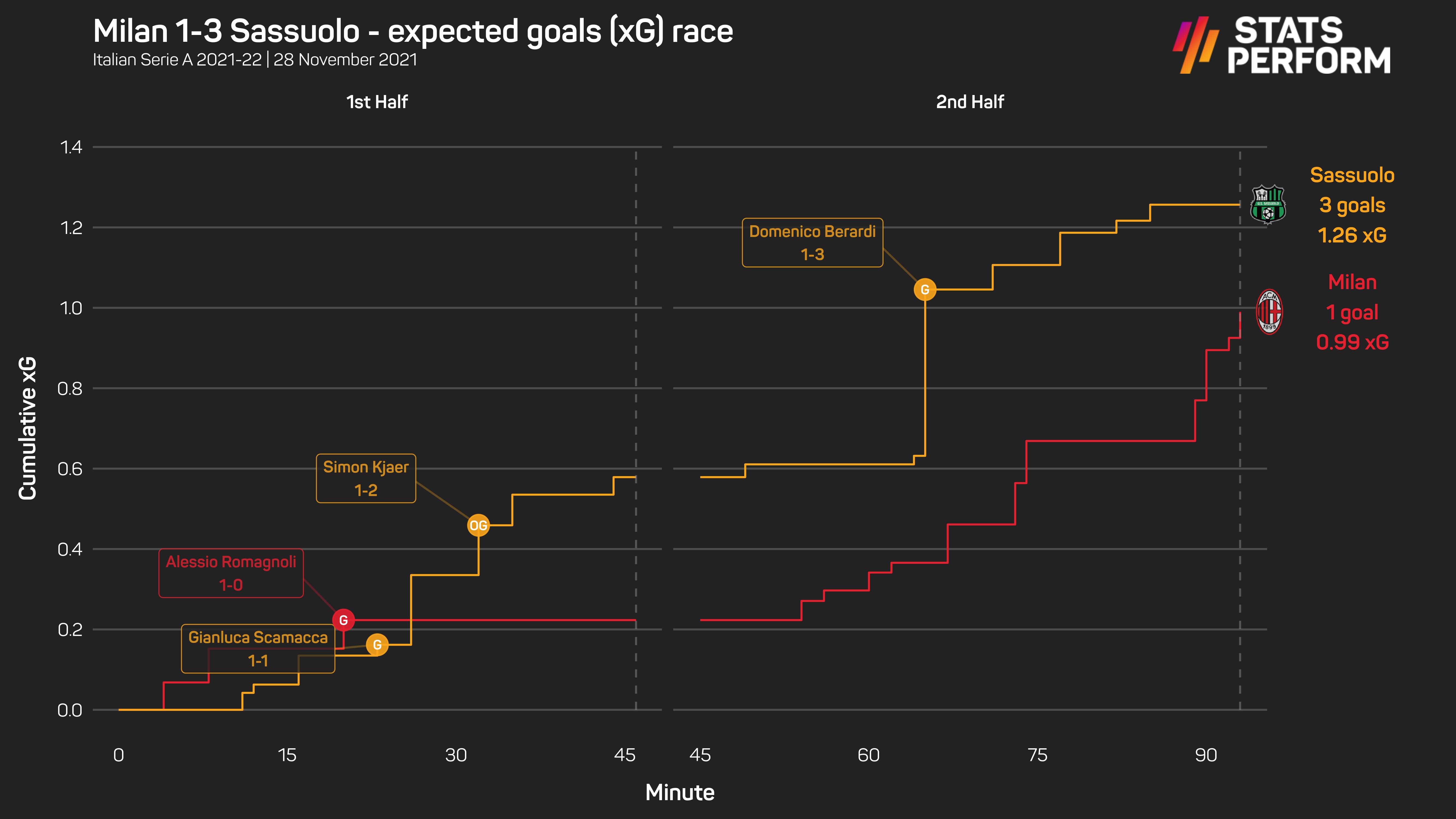 A 4-3 defeat to Fiorentina last week was a jolt to Milan, and this was every bit as concerning. Pioli signed a new contract just days ago, committing until 2023, and he will expect more from his players in future. Mike Maignan made three saves, as Milan could have lost by a wider margin.

"If we conceded seven goals in two games, it is clear that something went wrong," Pioli said. "Mentally we weren't so lucid in our choices and so it becomes easier to make mistakes.

"We are aware of our qualities and our defects and we must continue to work to improve. We started very strongly, but in the last few games we have all done a little less, both from a technical and tactical point of view."

Pioli said there were "no justifications" for Milan delivering such a display, which came four days after they won away at Atletico Madrid in the Champions League.

"We have been built to face these double commitments and we hope to carry them forward," Pioli said, quoted by Sky Sport Italia. "Today five players who did not play in Madrid played in order to have the right mental and physical energy."

While Milan toiled and came away disappointed, Sassuolo savoured the moment.

This was Milan's second successive home league defeat to Sassuolo, after a 2-1 loss in April. Until this turnaround, that April game had been the last time that Milan dropped points from a winning position.

Sassuolo head coach Alessio Dionisi enthused about the performance of Italy international Berardi, who scored for a third successive Serie A game and now has seven goals for the season.

Dionisi even said the 27-year-old, who helped Italy win Euro 2020 in July, should be a target for elite clubs.

This was Berardi's 250th Serie A game for Sassuolo, becoming the second player to reach that milestone, after Andrea Consigli.

"His qualities are indisputable, he deserves the attention of the biggest clubs," Dionisi said.

"Because he has not yet gone to a big one, maybe he is proud to play for Sassuolo."

Tyson Fury is waiting to find out his next opponent as talks continue over Anthony Joshua stepping aside.