Italy claimed gold in the men's 100 metres final and high jump on a night when a long-standing triple jump world record finally fell.

Italy enjoyed arguably their greatest night in athletics on Sunday with two gold medals in the men's 100 metres final and the men's high jump at the Tokyo Olympics.

Marcell Jacobs won the first Olympics title in the post-Usain Bolt era, crossing the line in a new European record time of 9.80 seconds ahead of the United States' Fred Kerley and Canada's Andre de Grasse.

The men's 100m, the first at the Games not featuring three-time champion Bolt since 2004, had been difficult to predict and that continued in the semi-finals as USA trials winner Trayvon Bromell, the fastest man in the world this year, failed to qualify with a time of 10.00.

The quickest times were in the third semi-final, won by 60m expert Su Bingtian, who smashed the Asian record with a time of 9.83 to become the first man from the continent to reach the Olympic 100m final since 1932.

After Great Britain's Zharnel Hughes was disqualified for a false start, Su this time could not get the explosive start he needed and it was Jacobs who held his form and speed to cross the line first. 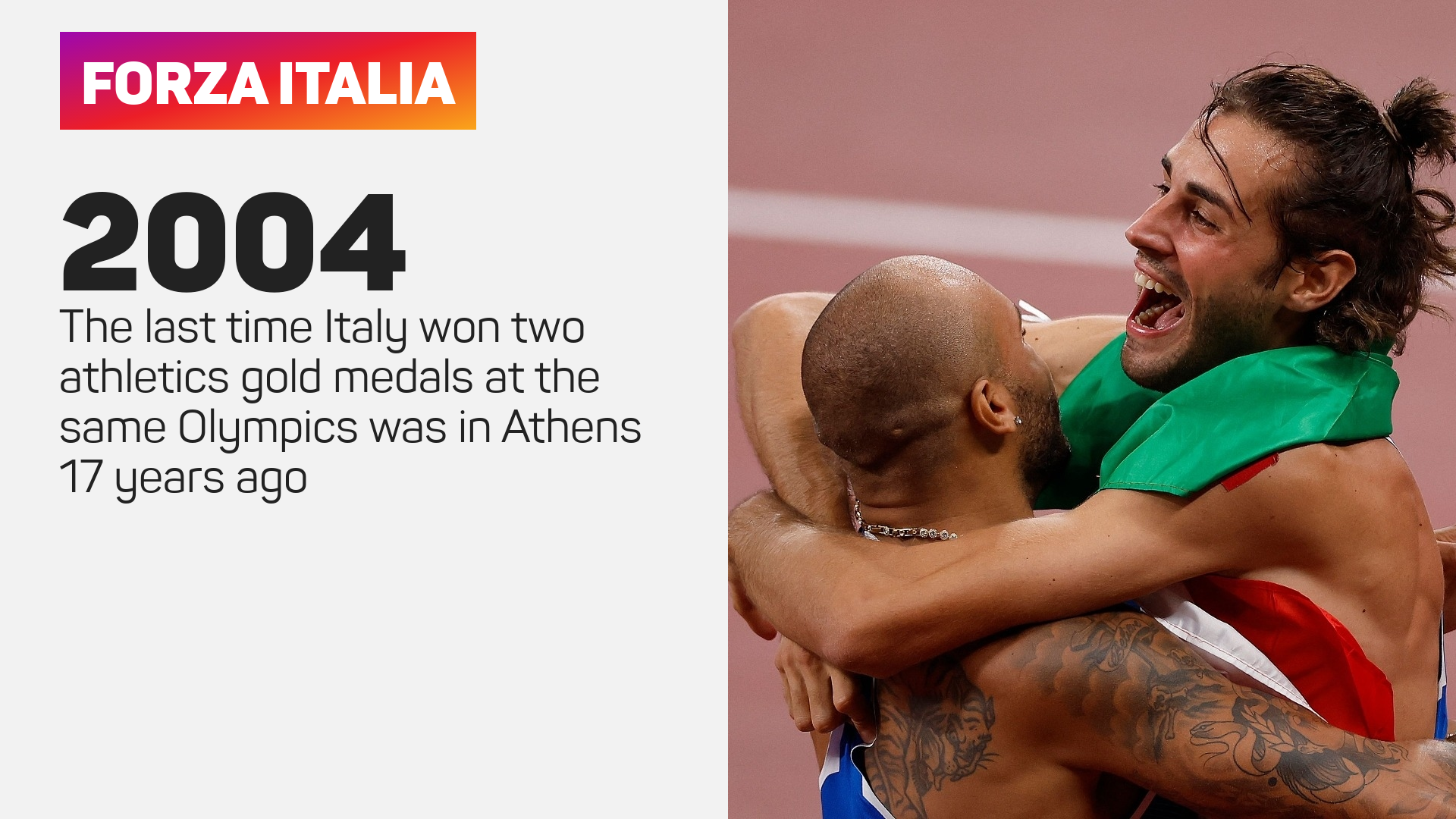 His triumph came barely an hour after a memorable high jump competition concluded with joint gold medallists being declared.

Italian Gianmarco Tamberi and double world champion Mutaz Essa Barshim each enjoyed spotless records before three failures at 2.39, a height that would have matched Charles Austin's Olympic record set in 1996.

Rather than contest gold and silver in a jump-off, the two agreed to share first place, celebrating wildly after speaking with the official.

"It's amazing, fantastic, it's a dream. It's incredible. No words," said Jacobs to the BBC before admitting his compatriot's exploits had inspired him.

"I watched him from the blocks and he boosted me really, really hard. I love Gianmarco. It's fantastic."

Tamberi added: "This night is memorable. We made our dream come true and we passed through many difficult times. I don't know what to say.

"We dreamed it so many times and now we did it."

The two-time world champion soared well over the mark of 15.50 set by Ukraine's Inessa Kravets in 1995 with her third jump, although she was beyond the board.

However, with her final attempt, Rojas leapt to a sensational 15.67 to finish 56 centimetres ahead of Patricia Mamona in second and Ana Peleteiro in third, each of whom claimed national records.

"I always said I was born with a talent, with a gift and I was destined to do great things in life," she said. "I think I'm opening doors and not just for myself. I'm opening doors [for people] who want to follow me. I'm so happy here to be talking to you, to write the history of my country." 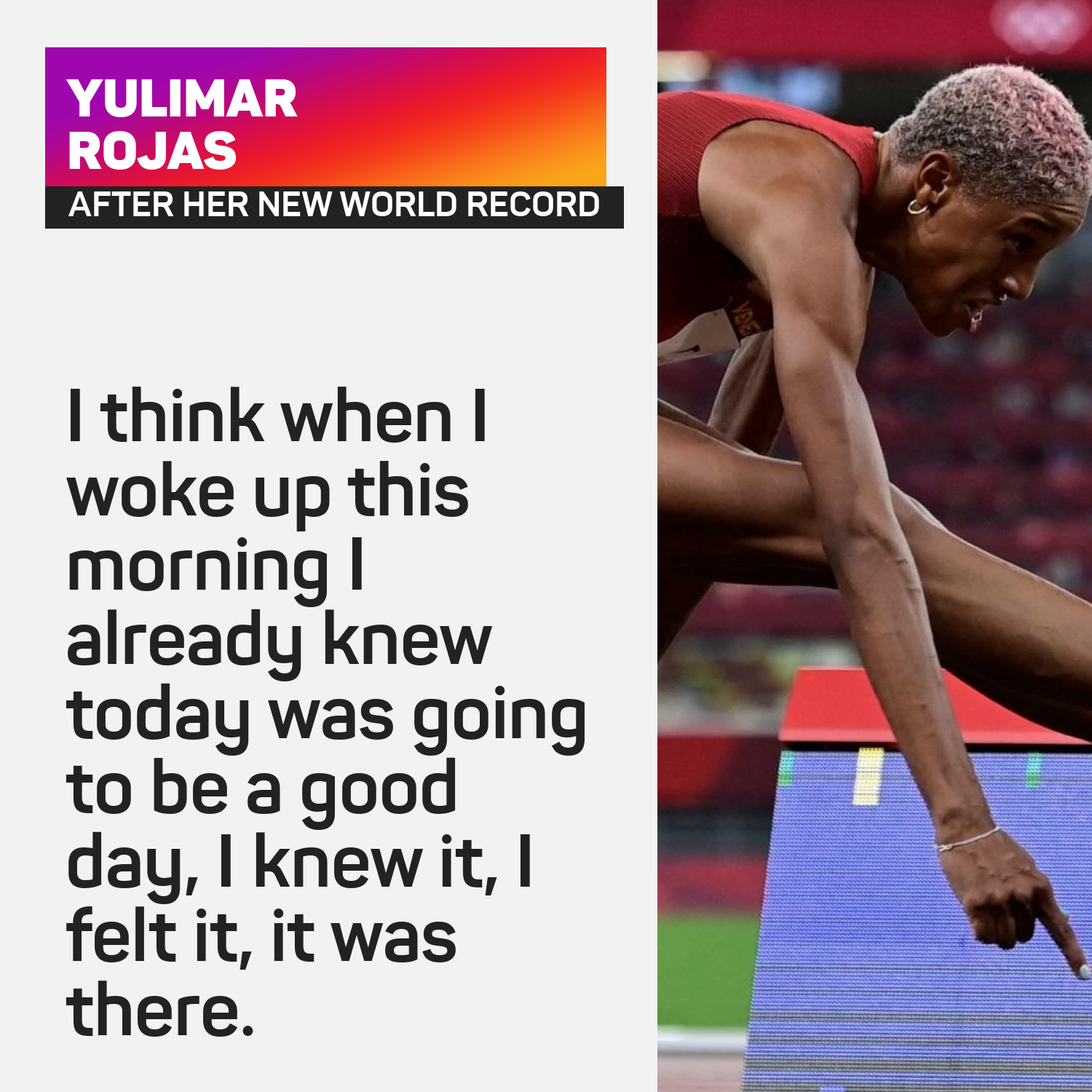 The women's long jump final will be contested on Tuesday, with Serbia's Ivana Spanovic topping the qualifying with a distance of 7.00m.

In the 100m hurdles semi-finals, Jasmine Camacho-Quinn laid down a marker to the rest of the field, romping through in a time of 12.26s to break Sally Person's Olympic record of 12.35s.

In the 3000m steeplechase, favourite Hyvin Kiyeng and reigning world champion Beatrice Chepkoech eased into the final amid punishing earlier temperatures in Tokyo.

Warholm and Benjamin surge into final

One of the great modern rivalries in men's athletics will continue on Tuesday after Karsten Warholm and Rai Benjamin eased into the final of the 400m hurdles.

Warholm, who broke the world record in Oslo a month ago, finished seven hundredths of a second ahead of the American in the first semi-final on Sunday.

Alison dos Santos of Brazil qualified with an arena record of 47.31s, just behind Warholm's 47.30s. A field so stacked with talent it was described by former Olympic champion Felix Sanchez as "insane" will make for a gripping final.

The men's heats in the flat 400m were also completed, world record holder Wayde van Niekerk qualifying in 45.25s, some way down on the leading time of 44.82s set by Michael Cherry.

Ferguson Rotich was the fastest in the men's 800m semi-finals, but Nijel Amos, who claimed silver in 2012 behind the great David Rudisha, collided with Isaiah Jewett and will not contest the final.

Raven Saunders was second and double former champion Valerie Adams, who won silver five years ago, took the bronze to complete her medal collection at this event.

"I've seen Valerie winning gold all the time and I'm very happy for her, but this time it is finally my time," said Gong.

Anita Wlodarczyk, who is bidding to become the first woman to win an individual athletics gold at three consecutive Games, needed just one throw to book her place in the hammer final.

Jimmy Greaves was hailed as one of the greatest ever strikers after he passed away on Sunday.

Jadon Sancho is yet to shine for Manchester United after arriving to much fanfare, but Ole Gunnar Solskjaer has no long-term concerns.

Jimmy Greaves, Tottenham's record goalscorer and a World Cup winner in 1966, has died.

Manchester City were held to a surprise draw as Liverpool picked up yet another three points against Crystal Palace.

As captain for both the upcoming Sudirman Cup (September 26-October 3) and Thomas Cup (October 9-17), Lee Zii Jia knows he will lead the firing line twice against Kento Momota in the span of less than a month.

Jim Knous claimed a tour lead for the first time in his career, after sinking five consecutive birdies on Saturday.

Bayern Munich had 15 shots on target to Bochum's none, with head coach Julian Nagelsmann reserving special praise for Leroy Sane.