Lin Yu-ting was one of four seeded women's featherweights to exit the Tokyo Olympics on an eventful day of boxing at the Kokugikan Arena.

Women's featherweight favourite Lin Yu-ting suffered early elimination from the Tokyo Olympics on Monday as the four seeded boxers in the event all crashed out.

Top seed Lin was beaten on points by her much smaller opponent Nesthy Petecio on a day of surprises at the Kokugikan Arena.

"I knew she was the top seed, but I didn't think about that in the ring," said Philippines hopeful Petecio, who won gold at the 2019 AIBA Women's World Boxing Championships.

"Just because I have beaten the number one doesn't make me more confident. I want to win the gold medal for my country, no one has ever done that." [Hidilyn Diaz won gold for the Philippines in the weightlifting elsewhere on Monday] 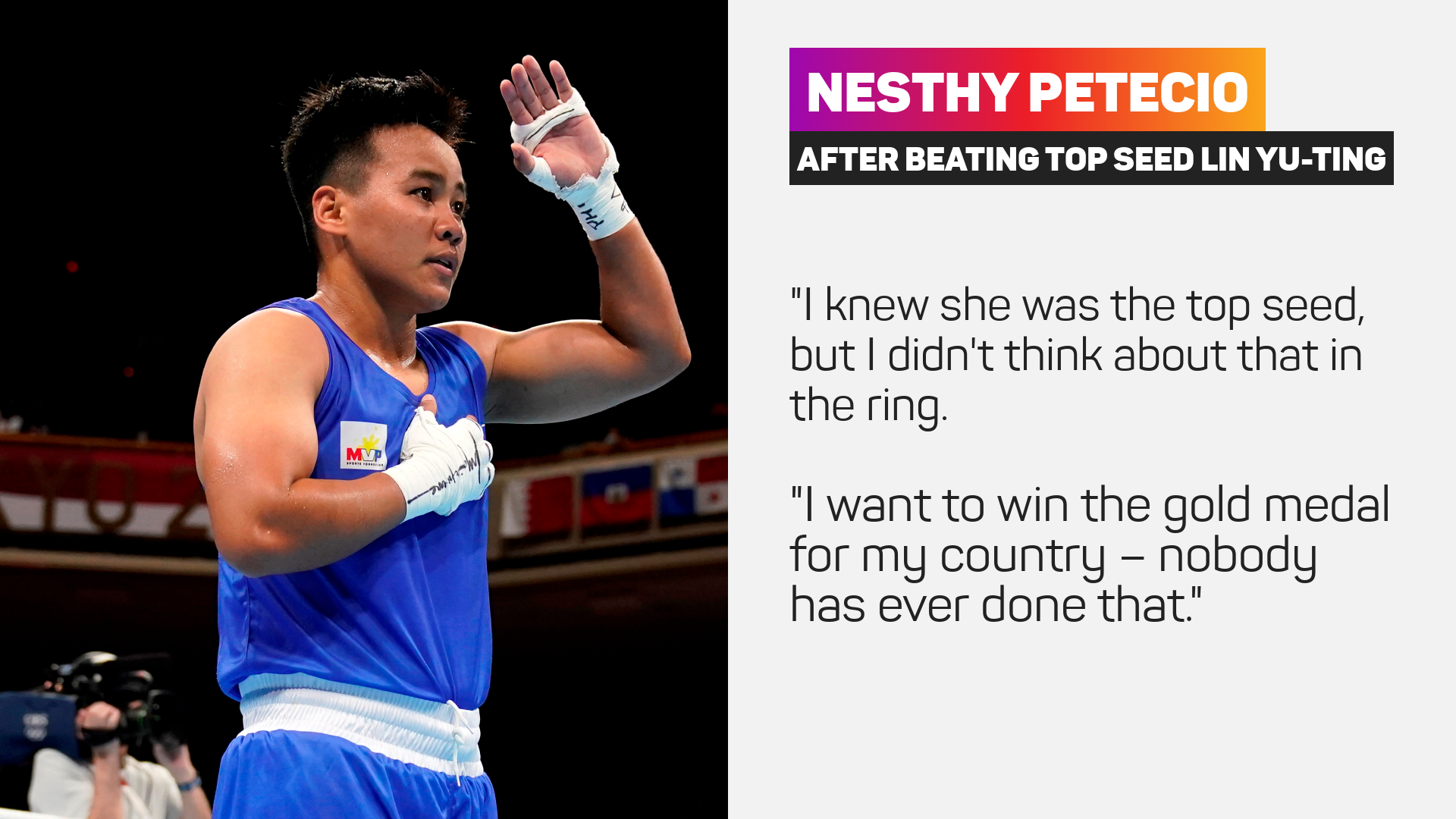 ARTINGSTALL OUT TO CEMENT HER NAME IN HISTORY

Jucielen Romeu was one of the other favourites to fall in the women's featherweight competition, going down by a unanimous points decision to Great Britain's Karriss Artingstall.

Artingstall took control of the bout with some controlled aggression and will now face Skye Nicolson, who beat Im Aeji, for a place in the semi-finals.

"Everybody wants gold," Artingstall said. "But I want my face cemented on that wall in Sheffield at boxing HQ, so they can look at my face for the rest of their lives.

"Seeds mean absolutely nothing to me, it's a number – one, twos, threes, whatever you want to call yourself.

"Until you get in that ring and beat me, I'm not going to say you're better than me or you box better than me. For her to be the number three seed meant absolutely nothing."

Michaela Walsh and Khouloud Hlimi Ep Moulahi were the other two seeds to fall on Monday, losing to Irma Testa and Sena Irie respectively on points.

| QUOTE: “Of course, everyone wants gold but I’m just taking it every fight as it comes.

"I want to get myself on that podium and my face cemented on that wall in Sheffield at GB Boxing HQ so they can look at me for the rest of their lives!”@karriss_imogenpic.twitter.com/UMY65G52yA

HOME HOPEFUL MORIWAKI GETS HIS REVENGE

Japan's Yuito Moriwaki beat Seyedshahin Mousavi with a split decision win in the men's middleweight division to remain on course for a medal on home soil.

Moriwaki, who lost to the same opponent last year, will now take on number one seed Oleksandr Khyzhniak of Ukraine in the last 16.

"The concept for this match was revenge," Moriwaki said. "I am glad I could achieve that today.

"I was able to come here mostly because of the support from people around me. I will not forget gratitude for them and do my best."

Also through to the last 16 are the likes of Tuoheta Erbieke and Troy Isley, the latter overcoming Vitali Bandarenka on points to set up a meeting with second seed Gleb Bakshi.

NO RIO REPEAT IN STORE FOR FINOL

Yoel Finol claimed a silver medal for Venezuela at the Rio Games but he will not have a chance to match or better that achievement five years on in the men's flyweight.

The 24-year-old dropped a three-round unanimous decision to Japan's Ryomei Tanaka, and a showdown with Hu Jianguan of China now awaits the latter.

"I knew he was the silver medallist for the Rio Olympic Games. He is also very tall, too," Tanaka said.

Galal Yafai, competing in his third Games for Great Britain, beat Koryan Soghomonyan with a third-round stoppage in one of the performances of the day.

The four seeded boxers – Amit Panghal, Billal Bennama, Yosvany Veitia and Mohamed Flissi – will enter the competition in the next round.

Jimmy Greaves was hailed as one of the greatest ever strikers after he passed away on Sunday.

Jadon Sancho is yet to shine for Manchester United after arriving to much fanfare, but Ole Gunnar Solskjaer has no long-term concerns.

Jimmy Greaves, Tottenham's record goalscorer and a World Cup winner in 1966, has died.

Manchester City were held to a surprise draw as Liverpool picked up yet another three points against Crystal Palace.

As captain for both the upcoming Sudirman Cup (September 26-October 3) and Thomas Cup (October 9-17), Lee Zii Jia knows he will lead the firing line twice against Kento Momota in the span of less than a month.

Jim Knous claimed a tour lead for the first time in his career, after sinking five consecutive birdies on Saturday.

Bayern Munich had 15 shots on target to Bochum's none, with head coach Julian Nagelsmann reserving special praise for Leroy Sane.