Tottenham were a match for Chelsea until half-time before a terrible second half, but Nuno Espirito Santo focused on the positives.

Nuno Espirito Santo was keen to focus on a positive first half against Chelsea after Tottenham collapsed following the interval, when "there were a lot of things that went wrong".

For the second week in a row, Spurs lost 3-0 to London rivals in the Premier League, although they were initially more impressive against Chelsea than they had been at Crystal Palace.

The out-of-sorts European champions reached the interval with the game still goalless, however, and the introduction of N'Golo Kante then changed the game.

He scored Chelsea's second goal via a huge deflection after Thiago Silva had become the club's second-oldest goalscorer in the competition. The 36-year-old trails only Didier Drogba (37 in 2015) in that regard.

Antonio Rudiger blasted in a late third, as Chelsea had 14 second-half shots, including 10 on target. Tottenham mustered just two and one respectively.

"There were a lot of things that went wrong," Spurs coach Nuno told BBC Sport.

"Let's start with the first half – I think it was a good game, competitive. We were on the the front foot, started pressing high, creating problems and had chances.

"In the second half, the set-piece and goal changes the game. Then it becomes much harder, the game totally changed and Chelsea took control and were the better team in the second half.

"It's difficult, but I'm proud of the first half and of all the game because we had troubles in the team and the players went to their limits." 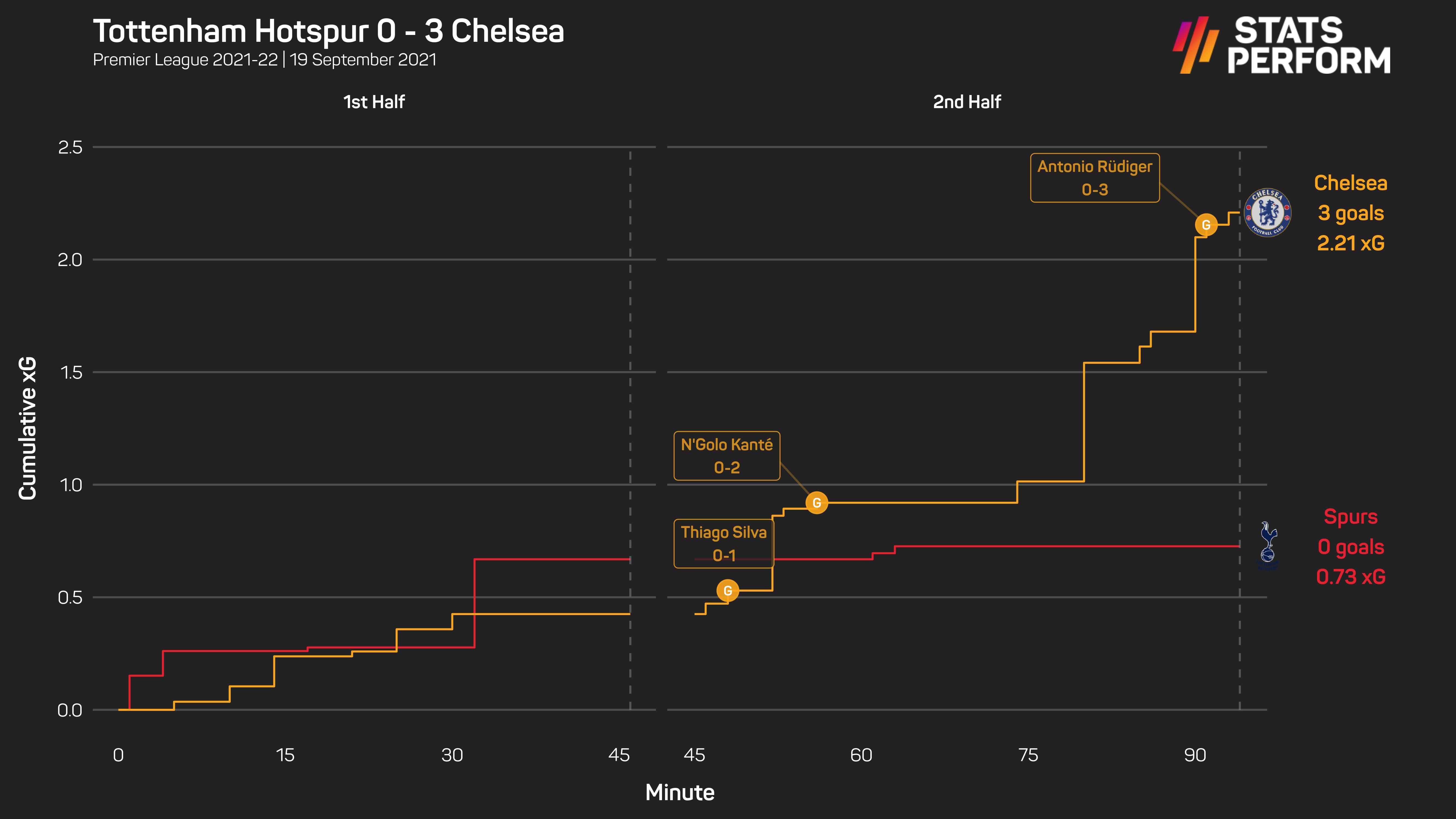 Spurs had 14 pressed sequences on Sunday, having averaged 10.3 per game so far this season, as they adopted a far more aggressive approach before half-time.

That subsided in the second period, in which Chelsea dominated 57.7 per cent of the possession, but Nuno repeatedly preferred to highlight his side's early work across his media duties.

The former Wolves boss described Tottenham as "fantastic" in that spell to Sky Sports, adding: "The first 45 minutes was huge for us. Now we have to sustain this level over the whole game."

Nuno then told a news conference: "[It was a] very good first half, very good. We competed really well, we played good football, we pressed high.

"So, we have the awareness that we have a lot of things we need to improve, but the awareness of the first half must stick with us so we can build on it."

He added: "If there's only one positive today, that was the first half."

Rickie Fowler made his move in Nevada with Rory McIlroy having the best round on the third day to be two shots behind.

Cameron Norrie and Nicoloz Basilashvili will both make their maiden Masters 1000 final appearances after qualifying for Sunday's decider.

Giroud savours return to goals as Milan fight back against Verona

Olivier Giroud scored his first goal since August in Milan's comeback win over Hellas Verona, much to his delight.

FIFA wants to make the World Cup a biennial competition, which concerns the International Olympic Committee.

Milan trailed Hellas Verona 2-0 at half-time but fought back to win 3-2 and claim top spot in Serie A.

Simone Inzaghi cut his employment ties with Lazio to become Inter head coach, and it was a miserable return to his former home on Saturday.

Mendy deserved a Ballon d'Or nomination, but Tuchel hopes 'it does not bother him'

Thomas Tuchel is not bothered that Edouard Mendy was left off the Ballon d'Or shortlist but thinks he deserved a nomination.

Chelsea, Manchester City and Liverpool all kept up their title charge, while a poor finale cost Manchester United against Leicester City.

Chelsea faced intense pressure from Brentford in the closing stages of their west London derby, resisting to clinch a hard-earned victory.