LeBron James and the Los Angeles Lakers won for the first time this season as Stephen Curry's Golden State Warriors improved to 3-0.

The Los Angeles Lakers claimed their first win of the season after outlasting Ja Morant and the Memphis Grizzlies 121-118 in the NBA on Sunday.

LeBron James and the Lakers had lost back-to-back games to open the 2021-22 campaign but finally had something to celebrate at home to the Grizzlies.

But it was Lakers veteran Carmelo Anthony who led the way with 28 points (on 10-of-15 shooting) from the bench.

Morant excelled with 40 points and 10 assists, but it was not enough for the Grizzlies (2-1), who lost for the first time. 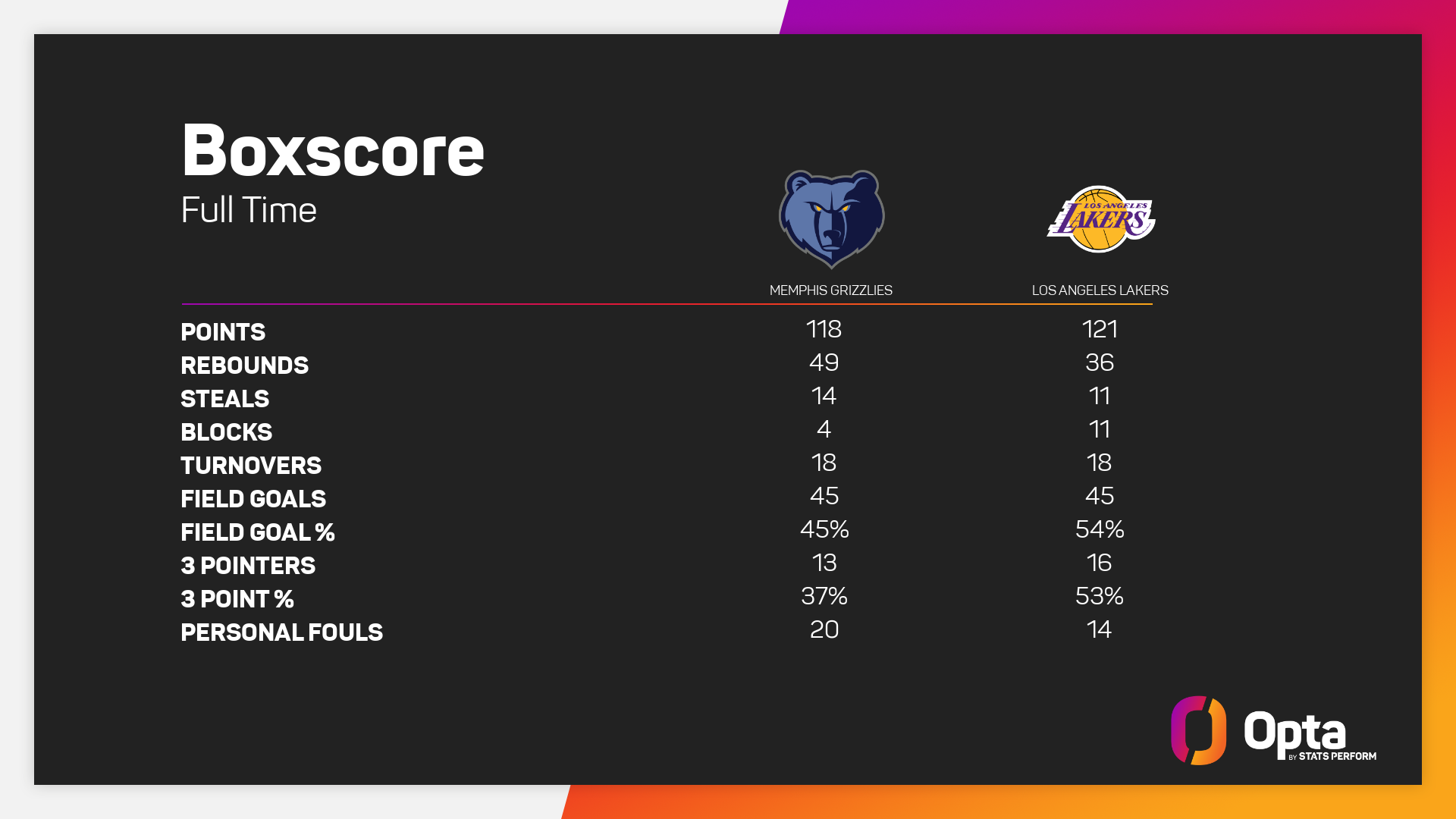 Stephen Curry was at it again to lead the Golden State Warriors to their first 3-0 start to a season since 2015 after a 119-107 victory against the Sacramento Kings. The two-time MVP put up 27 points, 10 assists, seven rebounds and three steals to fuel the unbeaten Warriors. With his fifth assist, Curry became the first player in franchise history to dish out 5,000 career assists.

The Philadelphia 76ers topped the rebuilding Oklahoma City Thunder 115-103. Seth Curry maintained his red-hot form, going seven-of-10 from three-point range for a team-high 28 points. Curry was six of seven from beyond the arc for 23 points in the opening quarter – a new career-high for a single period. He is the fourth 76ers player with at least 20 points in a quarter since 2010, joining Joel Embiid (four times), Jodie Meeks and Lou Williams. Embiid had 22 points, nine rebounds and six assists against the Thunder.

Jalen Green enjoyed a breakout game, despite the Houston Rockets going down 107-97 to the Boston Celtics. Green became the first rookie in Rockets history with 30-plus points and eight three-pointers in a game after finishing with 30 points – including eight threes, four rebounds and three assists.

The Charlotte Hornets are off to their first 3-0 start to the season thanks to a 111-95 win over the Brooklyn Nets behind Miles Bridges' 32 points. Kevin Durant led the Nets with 38 points in Brooklyn.

Harden struggles from the floor in Nets loss

James Harden was far from his best against Hornets, going just six-of-16 shooting from the field for 15 points in 33 minutes, while he also finished with eight turnovers.

Evan Fournier was three-of-11 shooting from the field – making just two of seven three-pointers – as the New York Knicks were stunned 110-104 by the Orlando Magic.

After Ole Gunnar Solskjaer's departure, Manchester United have announced Ralf Rangnick will take charge until the end of the season.

Due to coronavirus regulations in Melbourne, it remains to be seen whether Novak Djokovic will feature at the Australian Open.

Rumour Has It: Man City want Madrid's Benzema, Bayern to battle for Chiesa