Stefano Pioli believes Milan's 1-1 draw with Juventus shows how far his side have come as they no longer require a "miracle" to win a game they are second best in.

Milan battled back to claim a point in Sunday's Serie A clash at Allianz Stadium after Ante Rebic headed in 14 minutes from time to cancel out Alvaro Morata's early opener.

Without a number of key players through injury, including strikers Zlatan Ibrahimovic and Olivier Giroud, the Rossoneri struggled in the first half and could have been further behind.

But they took more control of the game in the second half, when seeing 62.7 per cent of the ball, and almost snatched the win late on through a well-saved Pierre Kalulu strike.

The draw ended Milan's perfect start to the league season, but they are level on points with champions and early pacesetters Inter after four matches.

Pioli, who guided the Rossoneri to second place last season – their best finish in nine years – is pleased with the way his side recovered to avoid defeat in Turin.

"We came here to win the game," he told DAZN. "We found a better opponent than us in the first 20 minutes especially, but we did much better in the second half.

"It was definitely a positive performance from us on the whole. Maybe last year to win these games we had to hope for a miracle; now we are aware that we can win these games.

"We tried until the end to claim the victory." 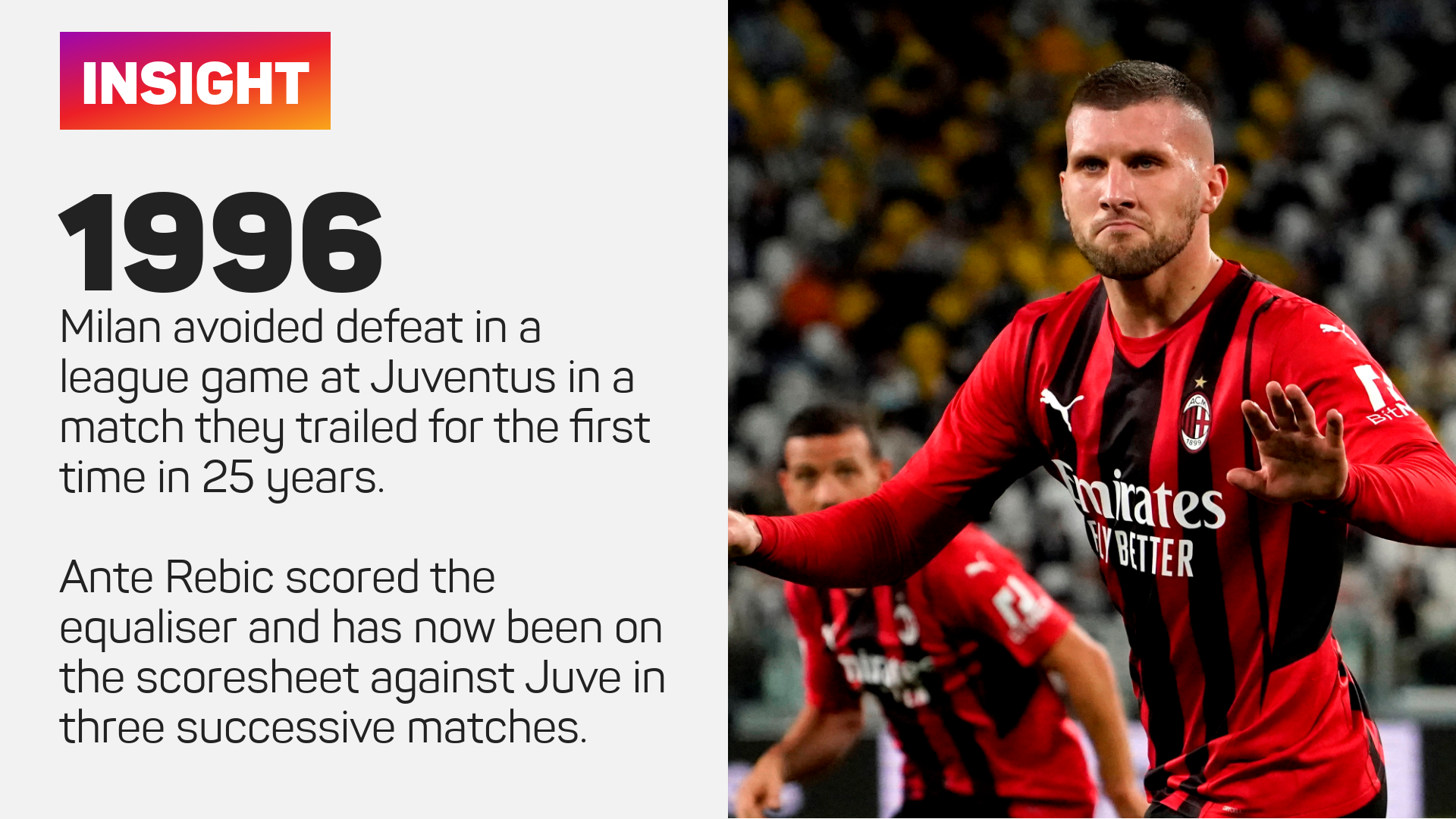 Rebic led the line in the absence of Giroud and Ibrahimovic and responded with his second goal in as many games, having also netted in the 3-2 Champions League loss to Liverpool in midweek.

The Croatian forward is the first Milan player to score against Juve in three successive Serie A games in the three-points-per-win era (since 1994-95) and Pioli heaped praise on Rebic.

"Ante has immense intensity and quality to his game," Pioli said. "He can play in more or less any role and he helped us today. He is a very important player to break games open.

"I've always seen my players ready to overcome any limitations. They have quality and work throughout the week with a sense of belonging.

"The opposition might be better on the day, but we will always give it our best shot going for the victory."

Rebic's header from a Sandro Tonali corner ensured Milan avoided defeat at Juventus in a match they trailed for the first time since February 1996.

While Milan are well positioned at the top end of the table, opponents Juventus are winless after their first four games for just the fourth time in their history.

Despite boasting an eight-point gap on Massimiliano Allegri's men, who are inside the relegation zone, Pioli insisted it is too soon to look at the league standings.

"We are only four games in," he said at his post-match news conference. "There is time for every team to improve their position. But of course were are satisfied with what we've done."

With Opta data, Stats Perform check the impact of Cristiano Ronaldo and Lionel Messi on LaLiga tussles between Barcelona and Real Madrid.