Ralf Rangnick made a bold move to bring three forwards off the bench, and it paid off handsomely with a late Manchester United winner.

Ralf Rangnick admitted he took a punt that paid off after Manchester United's super-subs combined for a priceless winner against West Ham.

Rashford tucked in from close range after Ronaldo fed Martial, who relayed the ball to Cavani, with the Uruguayan narrowly beating the offside line before delivering the perfect low cross.

After huffing and puffing without reward until that point, United could celebrate and the Old Trafford crowd was jubilant as the home side pinched a 1-0 win that lifts them to fourth place, at least for a short while, in the Premier League. Arsenal and Tottenham have the chance to jump ahead of United on Sunday.

United have scored eight goals via substitutes in the Premier League this season, said Opta, more than any other team. Old habits die hard.

Rashford's goal also meant that for the second time this season, West Ham were denied a point by a late United winner from a substitute, with Jesse Lingard's 89th-minute effort having decided the London Stadium tussle between the teams in September.

On that previous occasion, West Ham were thrown a lifeline when Luke Shaw handled and they were awarded a penalty, only for more substitute drama to follow. Mark Noble was sent from the bench to take the spot-kick, but the specialist missed.

This time, the goal came too late for any similar drama to follow.

"It couldn't have been better than that, if you score in the last second of the game. It was amazing," Rangnick told MUTV.

"I'm extremely happy for the boys. They did it, and we had to take some risks in the last 15 minutes.

"We played almost with four strikers in a 4-2-4, but we knew we had to win that game and that's why we decided to take that risk." 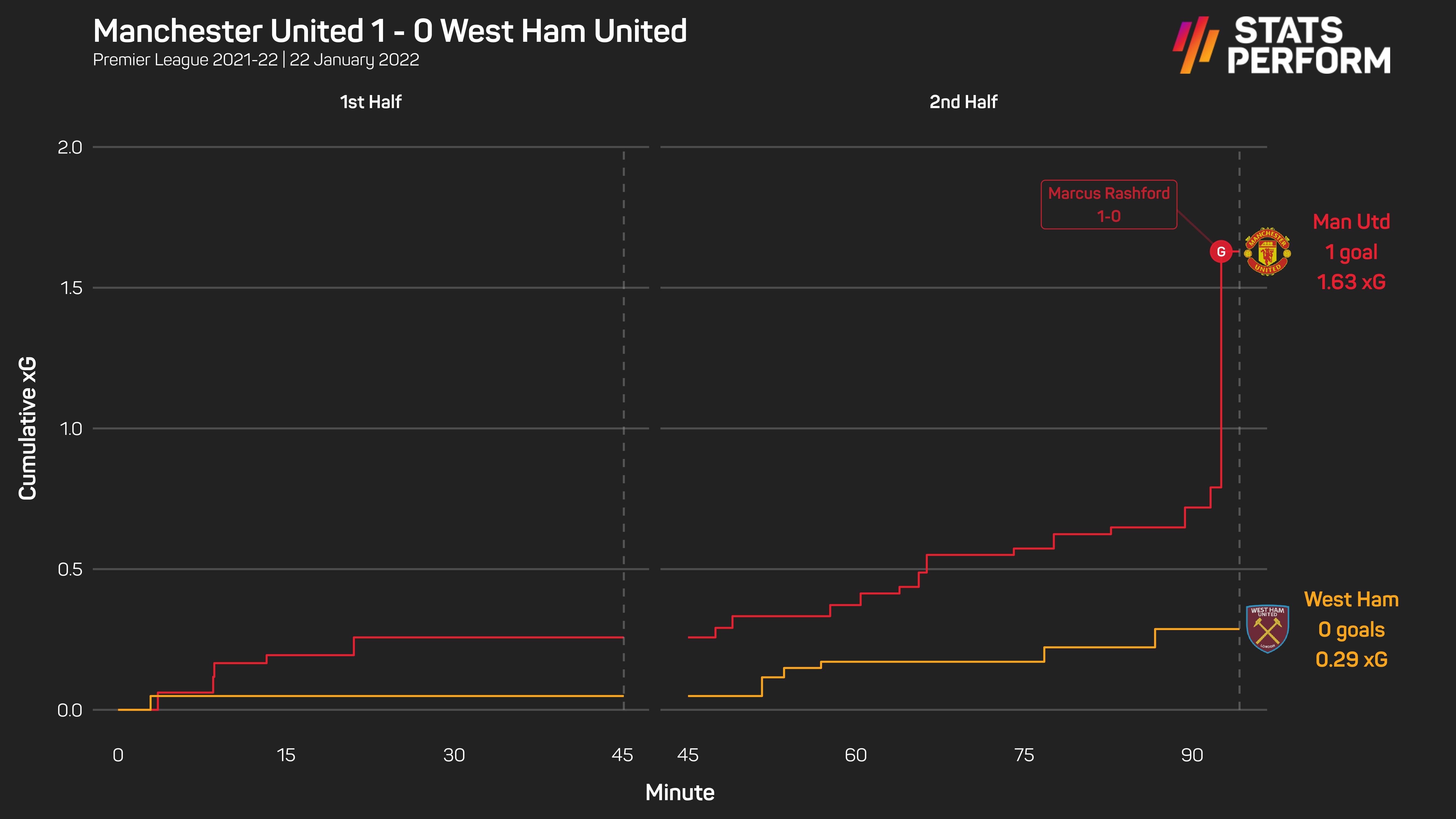 Rashford has been directly involved in more goals against West Ham in all competitions than he has against any other side at club level (eight – four goals, four assists).

He has hit four winners in the 90th minute or stoppage time in his United career, which is twice as many as any other Red Devils player in the Premier League era.

United have now won 21 of their 26 Premier League home games against West Ham (D3 L2) and are unbeaten in their last 14 against them at Old Trafford since a 1-0 loss in May 2007.

Another notable detail is that Saturday's hosts have only lost once in their last 10 Premier League games (W6 D3). This was their first clean sheet in the competition in six matches, another plus for Rangnick as United rebuild in the post-Ole Gunnar Solskjaer months.

All the positives aside, there were still elements that disappointed Rangnick in United's display, and it had been shaping up as a game to forget before the late twist.

After a win at Brentford on Wednesday, United looked flat at times against West Ham, who almost snatched the lead before Rashford's intervention when Tomas Soucek headed just wide.

"We didn't always find the right solutions in possession of the ball, especially in the final third of the game," Rangnick said. "But the way we played defensively after having played only three days ago at Brentford, I was really impressed by the team.

"I'm still not quite happy the way that we play in possession of the ball, so this will have to be the next step in the next couple of weeks."