It wasn't so long ago that the notion of Juventus hoovering up talent from Serie A rivals would have been seen in a negative light by most Italian football fans.

But while their domination of Italy's top division only really ended last season when Inter brought the Bianconeri's nine-year subjugation of Serie A to a halt, their current situation would make you think it was far longer since they were a challenger.

When the season resumes after this international break, Juve will go into their next fixture at least 11 points off the top, down in fifth. For years their recruitment has been muddled and misguided, with Aaron Ramsey's fringe squad status the perfect embodiment of that.

But Dusan Vlahovic's arrival shows there is life in the Old Lady yet, and given the striker's rise to prominence, this move is also potentially massive for Serie A in general.

Fiorentina hadn't been shy about their desire to cash in on the Serbian, who turned 22 on Friday. They have been very public about how they simply could not afford to lose out on a transfer fee, a situation that was quickly threatening to become a real issue given his contract was due to expire in 2023.

Pretty much all of Europe's biggest clubs were linked with Vlahovic at some point over the past 12 months, and for a while most people's money would have been on him moving to England.

"Oh, another emerging talent scurrying off to chase the big bucks of the Premier League, how predictable," many 'calcio' fans were presumably muttering to themselves as… *checks notes*… Arsenal and Tottenham circled.

As the story reportedly went, Vlahovic's agent didn't seriously consider those two in the end. Whether it might have been a different story for Manchester City, Liverpool, Manchester United or even Chelsea is unclear, but a coup it remains for Juve. 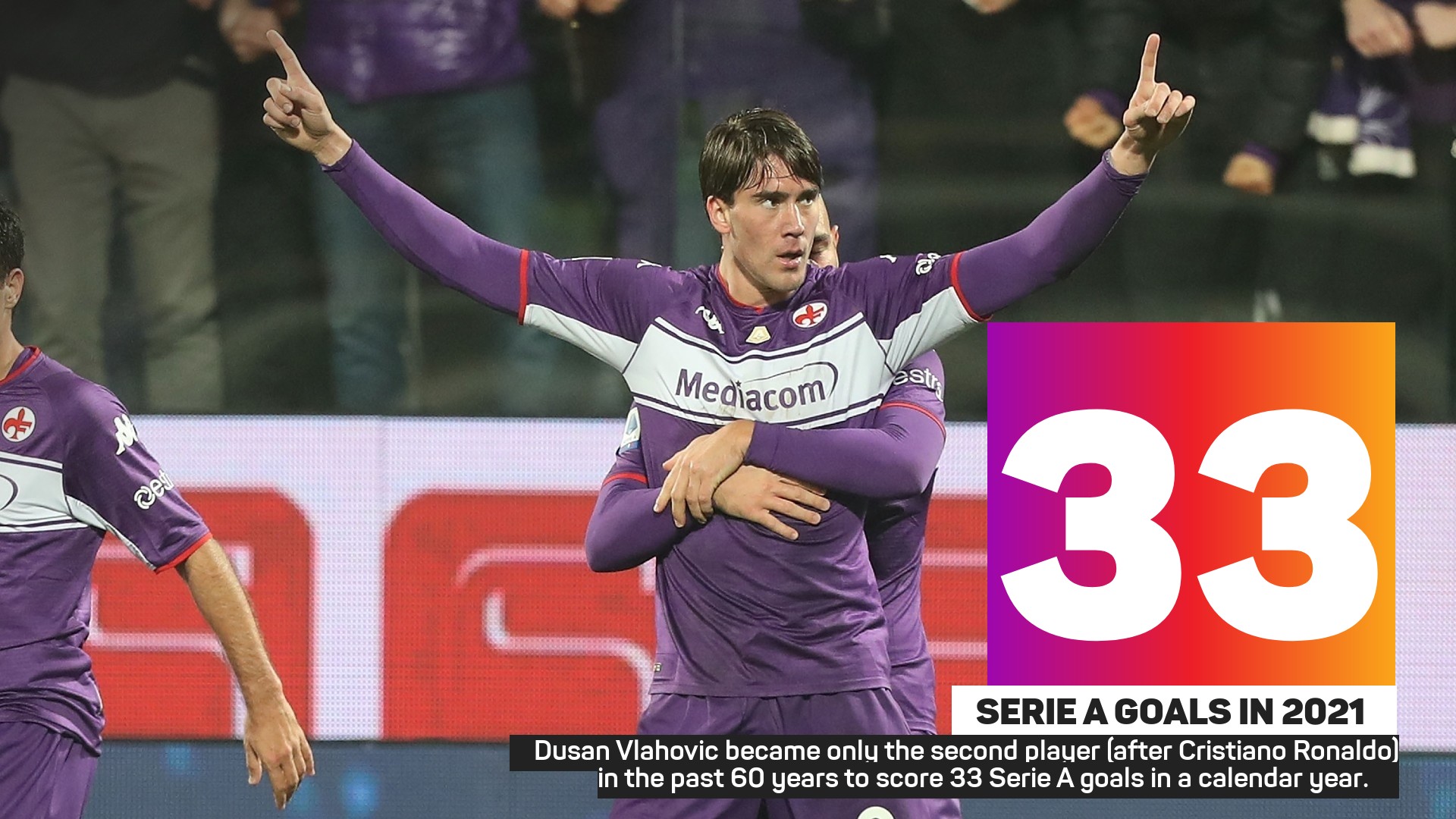 Vlahovic's impact on Italian football, particularly over the past 18 months, has been significant. Some have suggested he's Serie A's answer to Erling Haaland – perhaps a slight exaggeration, but there's a reason Juve are investing in a guy who in 2021, let's not forget, became only the second player in the past 60 years to net 33 Serie A goals over a single calendar year.

Juve's attraction to him makes absolute sense when you consider a metric as reductive – yet, crucial – as goals. Following Cristiano Ronaldo's exit last year, the Bianconeri were left with a gaping maw in terms of finishing ability. The faith placed in Alvaro Morata to pick up the slack was as optimistic as it was naive, as the Spaniard has five in 22 Serie A games.

Vlahovic should, in theory, provide them with a number nine who is dedicated to goals. As Fiorentina's focal point this term, he has recorded 87 shots (second-most among Serie A players) and scored 15 non-penalty goals across all competitions.

Some might point to the fact those 15 strikes are a considerable increase on his non-penalty xG (expected goals) of 10.2, and there's obviously a chance he won't prove to be quite so clinical for Juve, but it clearly shows they are buying a player brimming with belief. 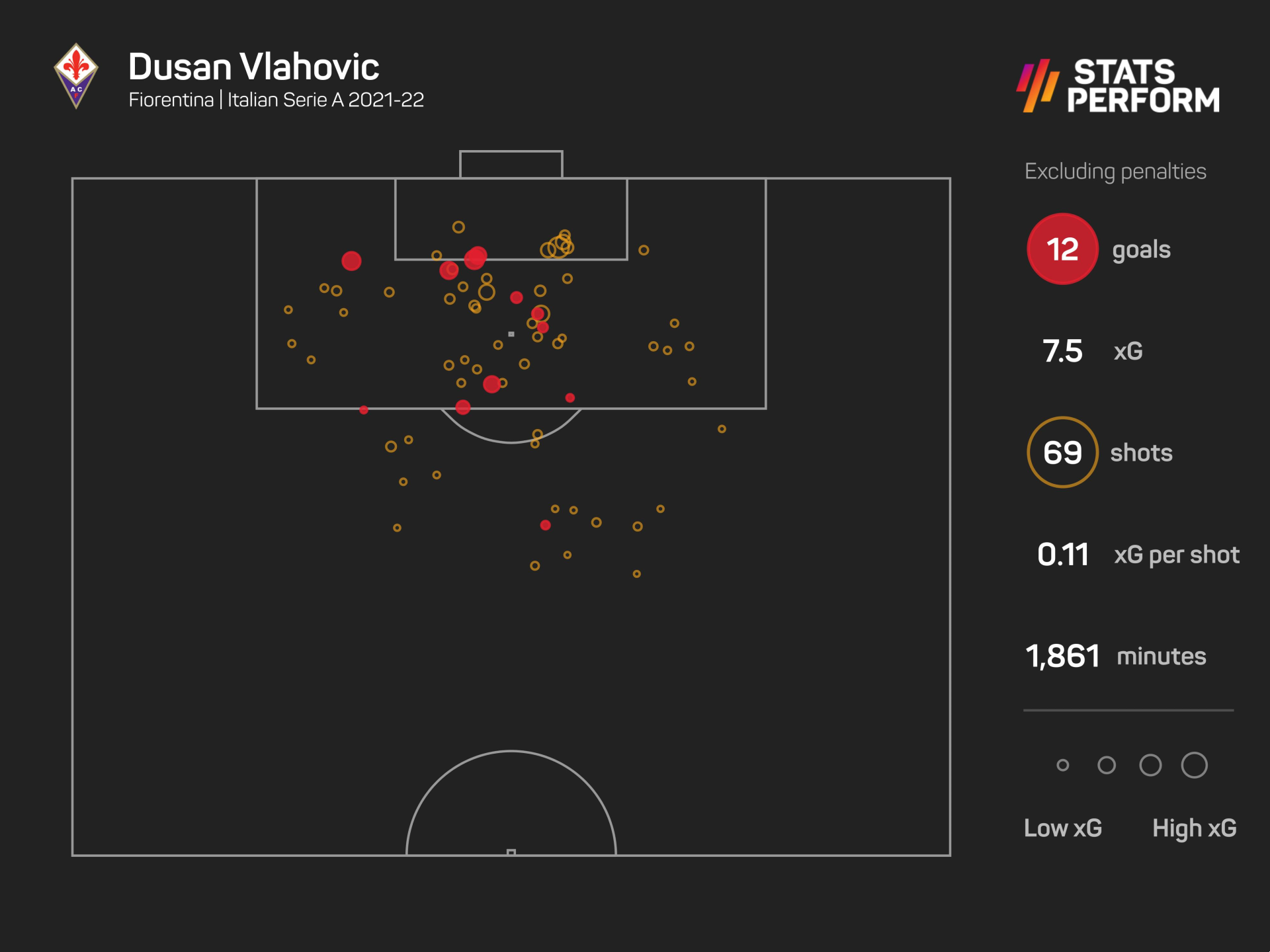 Similarly, being surrounded by better players in Turin may mean Vlahovic doesn't have to try as many low-xG shots. A quick look at his shot map in Serie A this season shows a significant variation in goal distances, which obviously has an impact on his xG per shot, which is 0.11 (excluding penalties).

That may not mean anything in isolation, but when you compare that to Tammy Abraham's 0.18, there's quite a gulf. The England striker seems to be better at getting into clear-cut goalscoring situations, but if Vlahovic is already proving this deadly from worse positions, imagine what he could do if he improves. 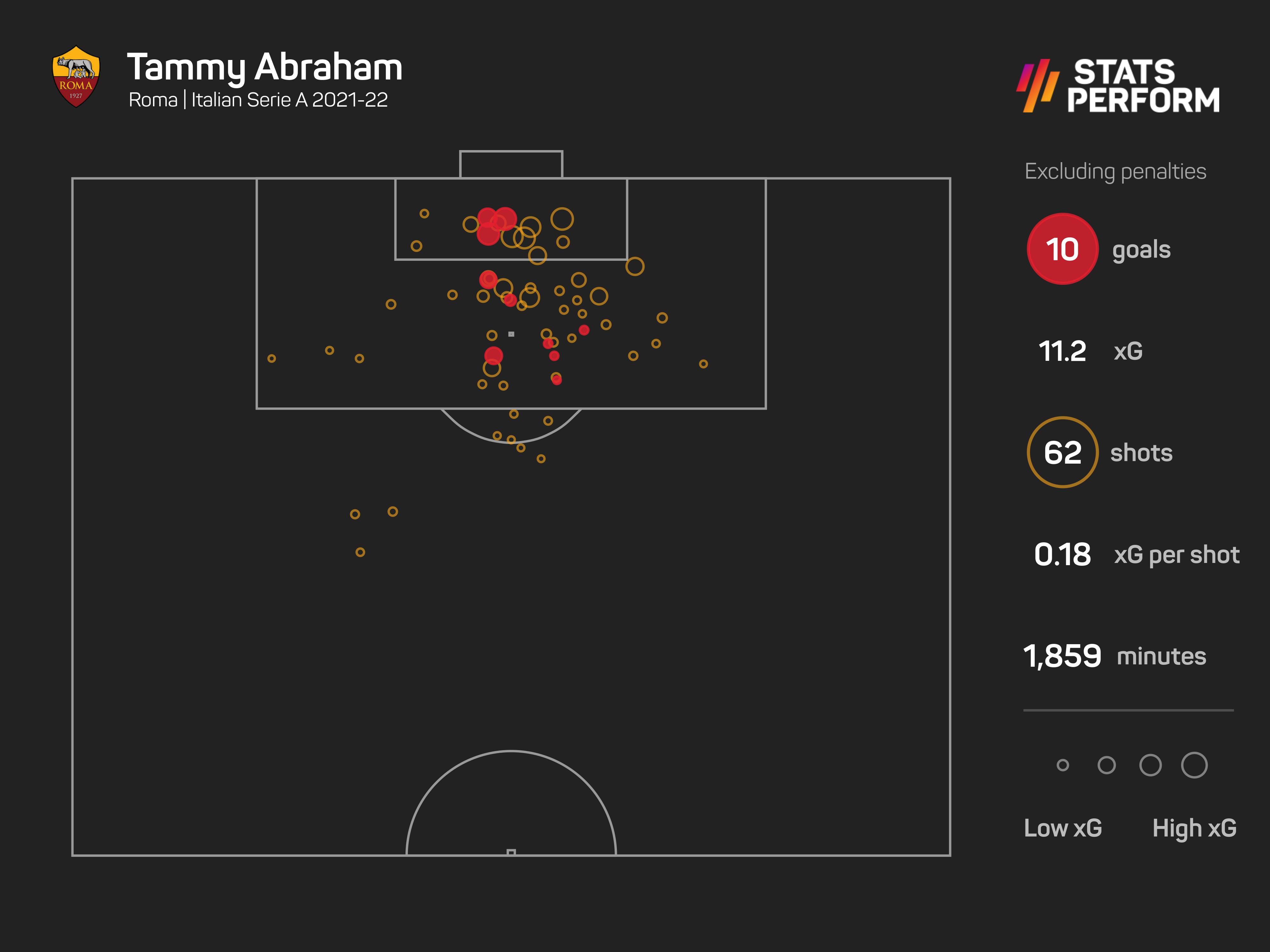 It's worth noting that by no means does Vlahovic only have eyes for goal. In fact, among 'conventional' strikers in Serie A this season, only four – and Paulo Dybala, nominally a creator anyway – have had more involvements in shot-ending sequences without taking the shot (45).

That speaks to Vlahovic's link-up play and his effectiveness at knitting attacks together in the final third, a skill that is not to every striker's liking. Yet he manages to fulfil this function without it being to the detriment of his goals output.

At Juve, assuming he links up in attack with Dybala, there may be less need for him to get as involved and that could potentially be how he improves his record of getting into higher xG situations.

It's fair to assume Juve would see that pay dividends on the goals front, given he already only averages 2.2 touches per shot inside the box – that's only fractionally more than Robert Lewandowski, Cristiano Ronaldo and Haaland (all 2.0), showing how he's more of an instinctive finisher than the likes of Mohamed Salah (3.1) and Kylian Mbappe (3.3), who are more about dribbling and beating defenders.

The fact is, Vlahovic still has elements to his game that could still improve, yet he's already performing at a high level. He may be young, but Juve have signed a player who can go straight into the team, which will presumably start being built around him.

Whether Massimiliano Allegri is the right coach for this new Juventus is another debate, but the acquisition of Vlahovic could be a game-changer.

At the very least, it's a genuine boost for Serie A to keep arguably its finest young player in the league despite the Premier League waving its vast sums in his direction.

US PGA Championship: Justin Thomas wins after playoff against Will Zalatoris

Justin Thomas trailed Mito Pereira by eight strokes heading into Sunday's final round, but he left with his second Wanamaker Trophy.

Zlatan Ibrahimovic's long-time agent Mino Raiola died last month, and the striker found it poignant to be celebrating a title without him.

Salernitana escaped dropping down to Serie B despite a comprehensive defeat against Udinese, as Cagliari were relegated on Sunday.