After sitting out a game due to suspension, Marko Arnautovic's return boosts Austria's hopes of finishing behind the Netherlands.

Austria head coach Franco Foda has seen his team match pre-tournament favourites France for shots and out-do Les Bleus for expected goals at Euro 2020 – but their last-16 hopes still hang in the balance.

Foda has confirmed striker Marko Arnautovic will start against Ukraine on Monday as both teams chase a victory to finish behind the Netherlands in Group C.

Arnautovic scored the third and final goal in his country's opening win over North Macedonia, converting a one-on-one opportunity having come off the bench in the second half in Budapest.

However, comments made towards opposing players as he celebrated in the immediate aftermath saw him handed a one-match ban for "insulting another player" by UEFA.

The former Stoke City and West Ham forward, who apologised for his conduct but insisted he was not a racist, sat out a 2-0 defeat to the Netherlands. Now, though, he is set to be named in the XI for the clash in the Hungarian capital.

"We decided to let him play from the first minute. They (Ukraine) can get better prepared, but we are happy that he can play again," Foda told the media.

"However, we shouldn't mistake that we are only dependent on him. We want to not have the responsibility on one player, so we have to be more effective, more clinical.

"We showed a good performance against the Netherlands, but in the last third the final pass was missing. We weren't a threat to the opposing defenders, so we want to improve."

Austria have had 19 goal attempts so far in their opening two games – the same as France have managed in Group F – and have built an expected goals (xG) aggregate of 2.67 so far (France: 2.24). Ukraine, however, have bettered both tallies by Foda's team, with 24 efforts at goal and an impressive xG of 4.26.

The Austrians and Ukrainians have met twice before in friendlies - winning one apiece - but this will be their first encounter at a major tournament.

Ukraine know a draw will be enough for them to take second place, and a point apiece could take both sides into the knockout stage, yet Andriy Shevchenko insists his side will not be taking into consideration such scenarios when they step onto the pitch.

"This kind of thinking can be punished a lot, so all the talk of agreeing to have a draw should be stopped immediately," the Ukraine coach said. "It's just not right.

"The teams understand how important this game is. We will be playing with the understanding of what is in front of us, what result we need to get to the next stage."

Yaremchuk has scored in each of his appearances at Euro 2020, netting with his previous two efforts at goal. Prior to this year's tournament, only seven players have found the net in their first three matches at a European Championship, most recently Gareth Bale for Wales at Euro 2016.

Not quite fit enough to start against North Macedonia, Arnautovic made an impact after coming on with the game locked at 1-1. He had just 22 touches in his cameo appearance but now gets the chance to have a greater involvement as Austria look to seal a spot in the last 16. 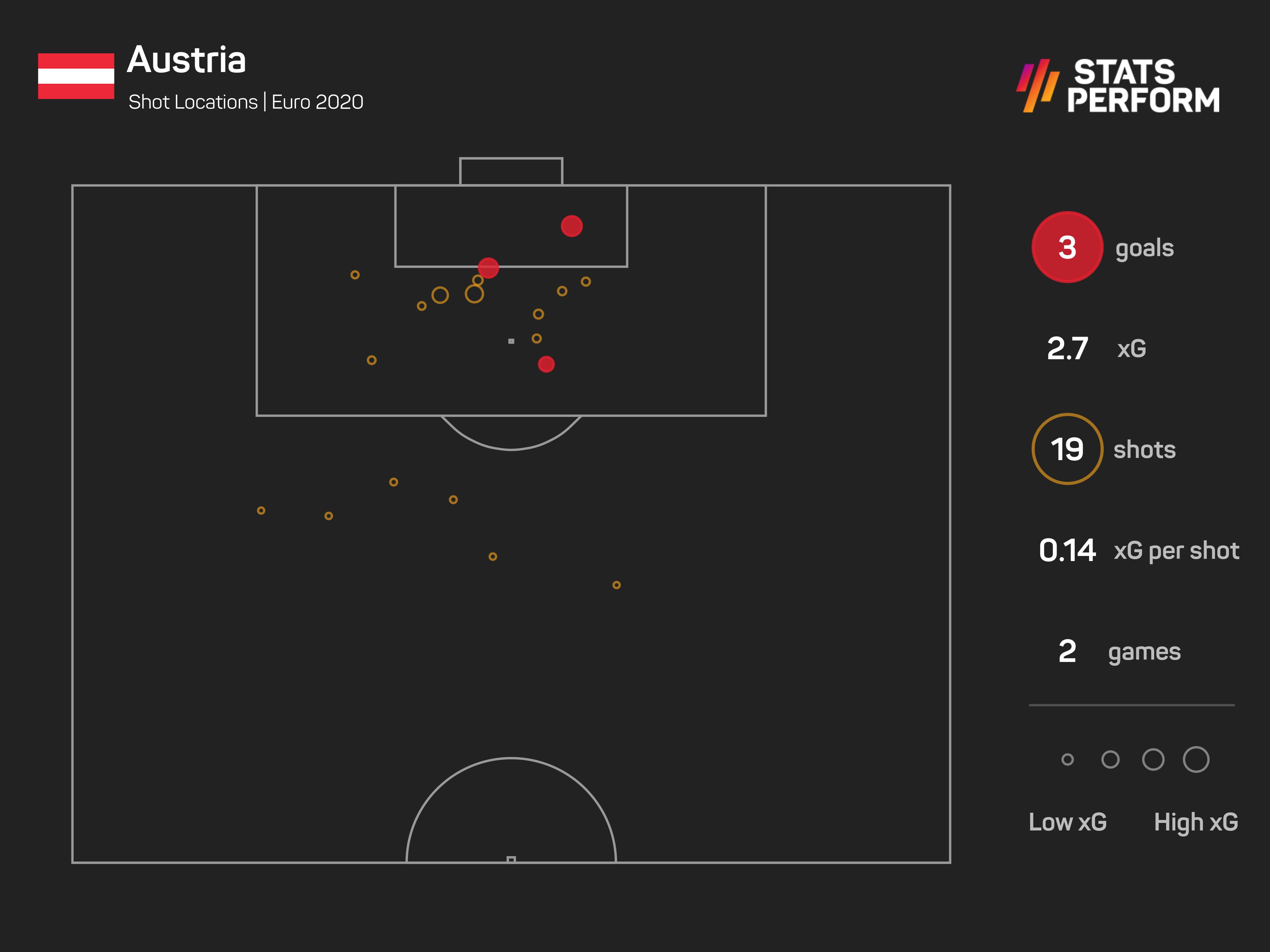 - The two previous games between Ukraine and Austria produced eight goals, an average of four per match.
- Ukraine ended a run of six consecutive defeats at the European Championships with a 2-1 win over North Macedonia last time out. They have not won consecutive matches at a major tournament since beating Saudi Arabia and Tunisia in the group stages of the 2006 World Cup.
- Austria have lost their last group match in each of their three most recent major tournament appearances – to Italy at the 1998 World Cup, Germany at Euro 2008 and Iceland at Euro 2016.
- Andriy Yarmolenko has scored in each of his last three matches for Ukraine, netting four goals, and is looking to score in four consecutive appearances for his country for the first time. Yarmolenko has been directly involved in four of Ukraine’s six goals (2 goals, 2 assists) at Euro 2020.
- Austria have had just seven shots on target in their two matches at EURO 2020 – only three of those efforts at goal have come from players in the starting XI, with 57 per cent of their shots on target coming via substitutes (4/7).

Cooper to link up with Wallabies squad

Fly-half Quade Cooper is to be involved in the Australia camp but is not an official member of the 42-man squad.

Alexander Zverev, Kei Nishikori and Stefanos Tsitsipas were among the winners on day two of the men's singles at Tokyo 2020.

Australia captain Aaron Finch is flying home from their Caribbean tour as he looks to recover from injury in time for the T20 World Cup.

Lee Zii Jia got off to a perfect start in his Tokyo Olympics campaign after handing Ukraine’s Artem Pochtarov a 21-5, 21-11 thrashing in their Group M opener.

The in-form Casper Ruud claimed a third ATP Tour title on clay this year at the expense of first-time finalist Hugo Gaston.

Duncan Paia'aua is among eight uncapped players in Australia's squad for the Bledisloe Cup and Rugby Championship.

Ash Barty says she will continue to fight for an Olympic gold medal despite falling at the first hurdle of the singles event in Tokyo.

Such was Anna Kiesenhofer's dominance in the road race, Annemiek van Vleuten thought she had won when actually finishing second.

Josh Kerr will make his Olympics debut at Tokyo 2020 and the Team GB runner has his eyes on bringing home a medal.