Back-to-back losses have been rare for Turkey and their aim of reaching the last 16 will be boosted if they can avoid defeat against Wales.

Turkey face Wales in Group A hoping to continue a long streak of avoiding consecutive defeats in a meeting between two sides looking to recover from underwhelming starts to Euro 2020.

The tournament's opening fixture saw Turkey blown away by Italy in Rome, with the hosts breezing to a 3-0 win at the Stadio Olimpico. A day later, Wales were fortunate to claim a 1-1 draw with Switzerland, VAR sparing Rob Page's side as Mario Gavranovic saw a winning goal ruled out for offside.

Given the possibility for the third-placed side to progress, Wednesday's encounter in Baku is not necessarily a must-win for either side.

But both will be eager to make significant improvements from matchday one to boost their hopes of progressing to the last 16, with Turkey – seen by many as dark horses for the tournament – sure to take at least some confidence from their record of avoiding back-to-back losses. 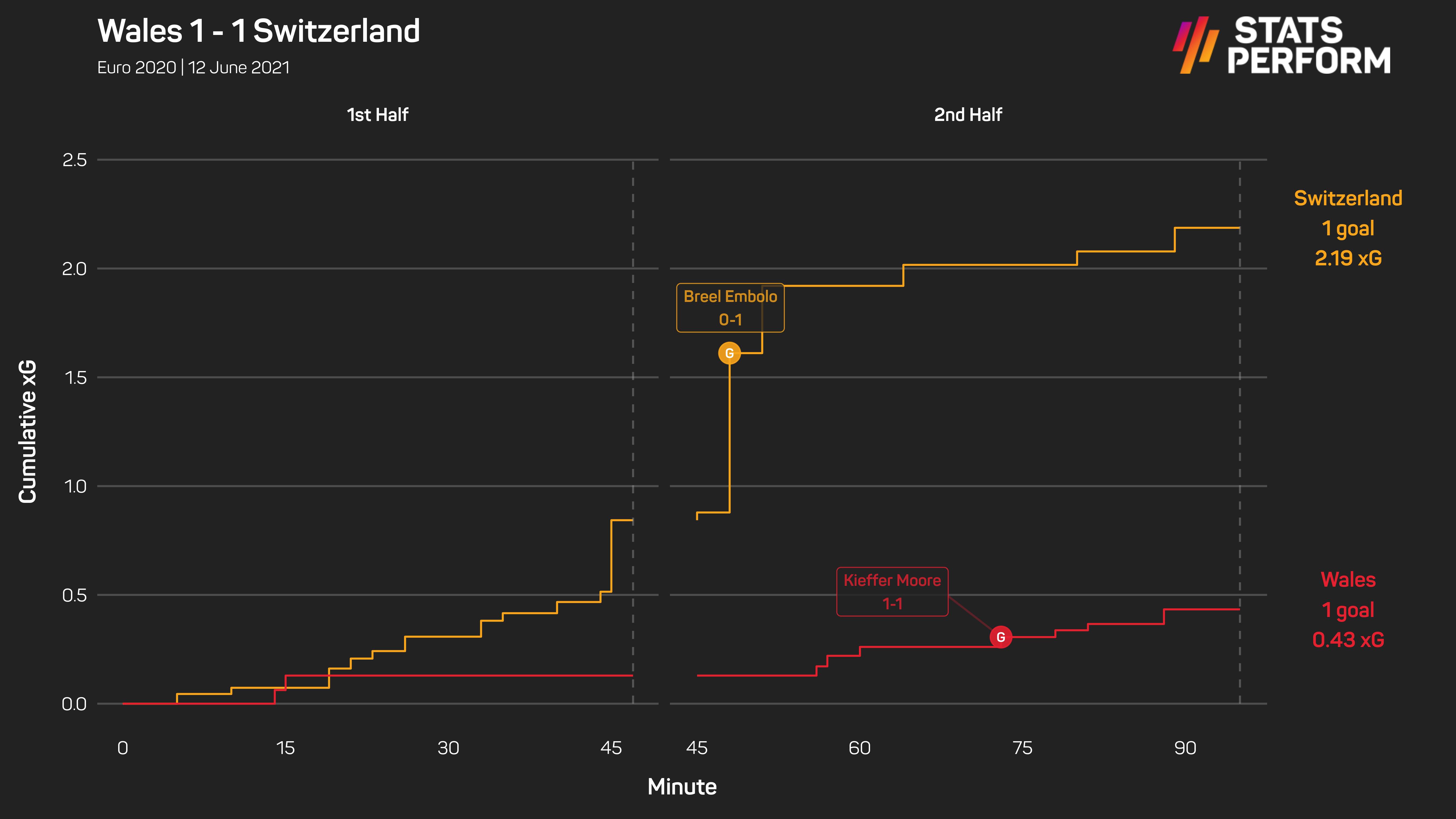 Their result against Italy meant Turkey have lost all seven of their opening games at major tournaments. However, they have progressed to the knockouts the last three times they have avoided defeat in their second group-stage match (Euro 2000, World Cup 2002 and Euro 2008).

And Turkey have not lost consecutive matches in all competitions since November 2018. Under current boss Senol Gunes, enjoying his second spell in charge, they have not lost back-to-back games since April 2003.

Wales have progressed from the group in their previous two appearances at a major tournament – the 1958 World Cup and Euro 2016 – but lost their second match in each of those competitions.

Striker Kieffer Moore could be pivotal to Wales avoiding having to deal with such a setback this time around. Moore scored the equaliser against Switzerland, with five of his six international goals coming in competitive fixtures.

Having put the disappointment of the Italy game behind them, Turkey captain Burak Yilmaz says they are ready to justify their pre-tournament status as a team to watch.

Turkey will likely still be favourites to defeat Wales, but Page insists his side are confident of putting themselves in a strong position to progress.

"We've got a game plan we want to stick to, one that we think can cause Turkey problems," said Page.

"Turkey probably looked at the fixtures coming into the tournament and saw they had a very difficult opener against the favourites Italy. They'd be looking at our game to get the three points, and we're fully prepared for that.

"But we'll be going for the win, and if you get four points from two games, it sets us up nicely."

Few players came away with any credit from Turkey's heavy opening defeat but the flashes Under displayed after coming on as a substitute suggest he could feature from the start against Wales.

He was one of just three Turkey players to have a shot and also played a key pass. Under had scored three goals in his last five games prior to the start of the tournament, including efforts in friendlies with Croatia and Russia. Despite a disappointing season on loan at Leicester City, Under has the ability to make a decisive impact.

In a team blessed with the talents of Gareth Bale and Aaron Ramsey, it was Luton Town midfielder Morrell who was the primary creative influence for Wales against Switzerland.

He played three key passes while it was his cross that provided the assist for Moore to equalise and earn a share of the spoils.

A similarly impressive display could be key to helping Wales take a big step towards qualification.

- This will be the first match between Turkey and Wales at a major tournament. Their last encounter dates back to August 1997 in a World Cup qualifier that produced 10 goals, with Turkey winning 6-4 in Istanbul. Four of Turkey's goals were netted by Hakan Sukur, while current Wales boss Page played for his country that day.

- Wales last beat Turkey 40 years ago, in March 1981, courtesy of a goal from Carl Harris in a World Cup qualifier in Ankara (0-1). Gunes was in goal that day for the home side.

- Wales have only failed to score in one of their seven matches at the European Championship, doing so in their 2-0 semi-final defeat to Portugal in 2016.

- Turkey had just three shots in their first match against Italy, their fewest ever in a European Championship match, while they failed to attempt a single shot on target for a second time in their last three matches in the tournament.

- Thirty-three per cent of Wales' nine shots in their opening game against Switzerland were taken by Kieffer Moore, while 33 per cent of them were created by Joe Morrell – with the Dragons' leveller being scored by Moore from a Morrell assist.

Raphael Varane is set to join Manchester United from Real Madrid as the Red Devils continue to spend in the transfer window.

Allegri reveals he turned down Real Madrid for Juventus

Juventus head coach Massimiliano Allegri was grateful for an offer from Real Madrid but said he could not turn the Bianconeri down.

After impressing for PSV last season and the Netherlands at Euro 2020, Donyell Malen has completed a switch to Borussia Dortmund.

Ashley Cole will combine his role as a Chelsea academy coach with the assistant manager job for England's Under-21 side.