The Rugby Championship 2021: The Breakdown - All Blacks on brink of title ahead of 100th Springboks showdown

Wounded South Africa have lost back-to-back Tests against Australia ahead of a landmark battle with champions-elect New Zealand.

New Zealand are on the brink of landing the Rugby Championship title ahead of their 100th Test against holders South Africa in Townsville on Saturday.

The All Blacks have been in a class of their own, taking maximum points from four matches to put one hand on the trophy and replace the world champions at the top of the rankings.

South Africa are smarting from back-to-back defeats to Australia, leaving them 10 points adrift of the leaders with two games against Ian Foster's side to play.

Australia are just a point behind the Springboks ahead of their clash with Argentina this weekend.

Here, we use Opta data to preview the double-header at Queensland Country Bank Stadium.

There appears to be no stopping New Zealand at the moment, with their winning run standing at nine matches following back-to-back defeats of Argentina.

The last time the All Blacks enjoyed a longer winning streak was in October 2016, when they completed a run of 18 on the spin.

South Africa, on the other hand, are two without a win and have not had a worse run since losing four in a row from October to November five years ago. 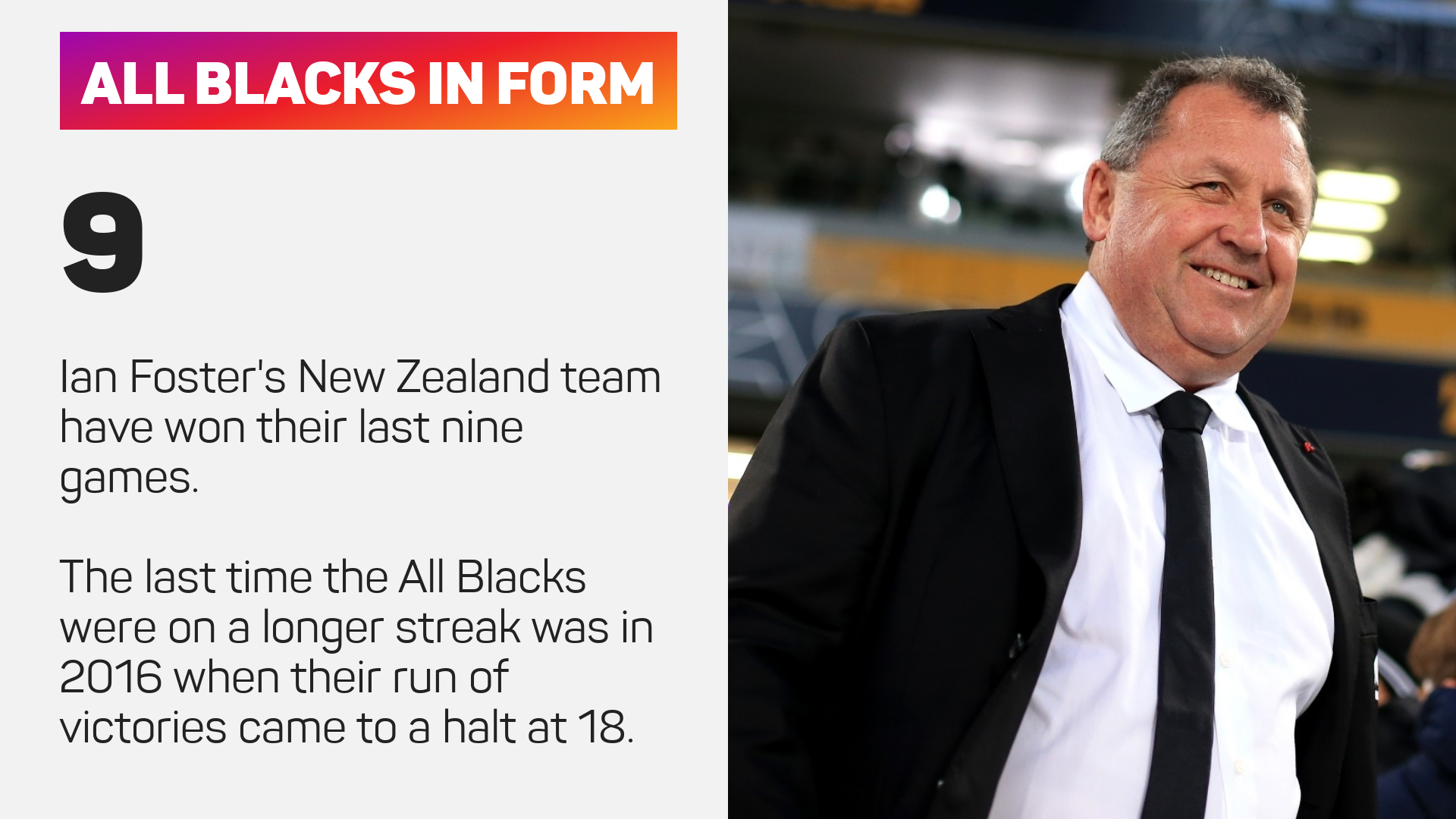 Akira Ioane is one of eight New Zealand players to be facing South Africa for the first time. Starting at blindside flanker on Saturday, his potency in the Springbok half could be key – only Jordie Barrett (nine) has beaten more defenders in opposition territory than Ioane (eight) in the 2021 competition.

Lood de Jager is back following concussion to reunite with Eben Etzebeth in the Springbok second row. They, along with Argentina's Guido Petti, are the only players to have stolen multiple lineouts at this year's tournament.

Australia are on a high after two impressive wins over South Africa, playing some entertaining rugby in a 30-17 bonus-point win in Brisbane last weekend.

Argentina are rooted to the foot of the table without a point from four matches, with a points difference of minus 101.

Each of the last two Tests between these nations ended in a draw. Only once in Test history have any tier one nations drawn three in a row (England vs France from February 1959 to February 1961).

Australia captain Michael Hooper tends to enjoy facing Argentina: his most recent five home Tests against the Pumas have yielded a personal haul of four tries and one assist.

Argentina's best hope of springing a surprise could rest on the shoulders of Marcos Kremer, who is the only player in this championship to have registered more than 30 in both carries (31) and tackles (48). Another big showing from flanker Kremer might give the South American side a sniff.