Arsene Wenger is "ready to take that gamble" by attempting to push through plans for the World Cup to be staged every two years.

Wenger, now FIFA's chief of global football development, is the figurehead of a move to transform the game's calendar, with the Frenchman seeking influential support but also encountering serious opposition to the project.

The legendary Arsenal manager has proposed the World Cup is held every two years and that there are fewer international breaks throughout the year.

While FIFA claims the majority of supporters favour holding the tournament more frequently, the plans have been strongly criticised by other governing bodies.

CONMEBOL, which represents South American federations, argued a change "could distort the most important football competition on the planet".

European football governing body UEFA, meanwhile, fears players burning out – among a range of other negative factors – should the proposals get the go ahead.

However, Wenger is not backing down and believes his suggestion will only improve the sport in the long term.

"The risk is to make football better, and I'm ready to take that gamble," he told BBC Sport.

"The international match calendar is fixed until 2024. Until then, nothing can change. I've been guided by a few ideas to propose a plan to reshape the international calendar.

"The first one is to make football better all over the world. The second one is to have a more modern way and more simple way to organise the calendar.

"Therefore, I want to reduce the number of qualifiers and to regroup the qualifying periods." 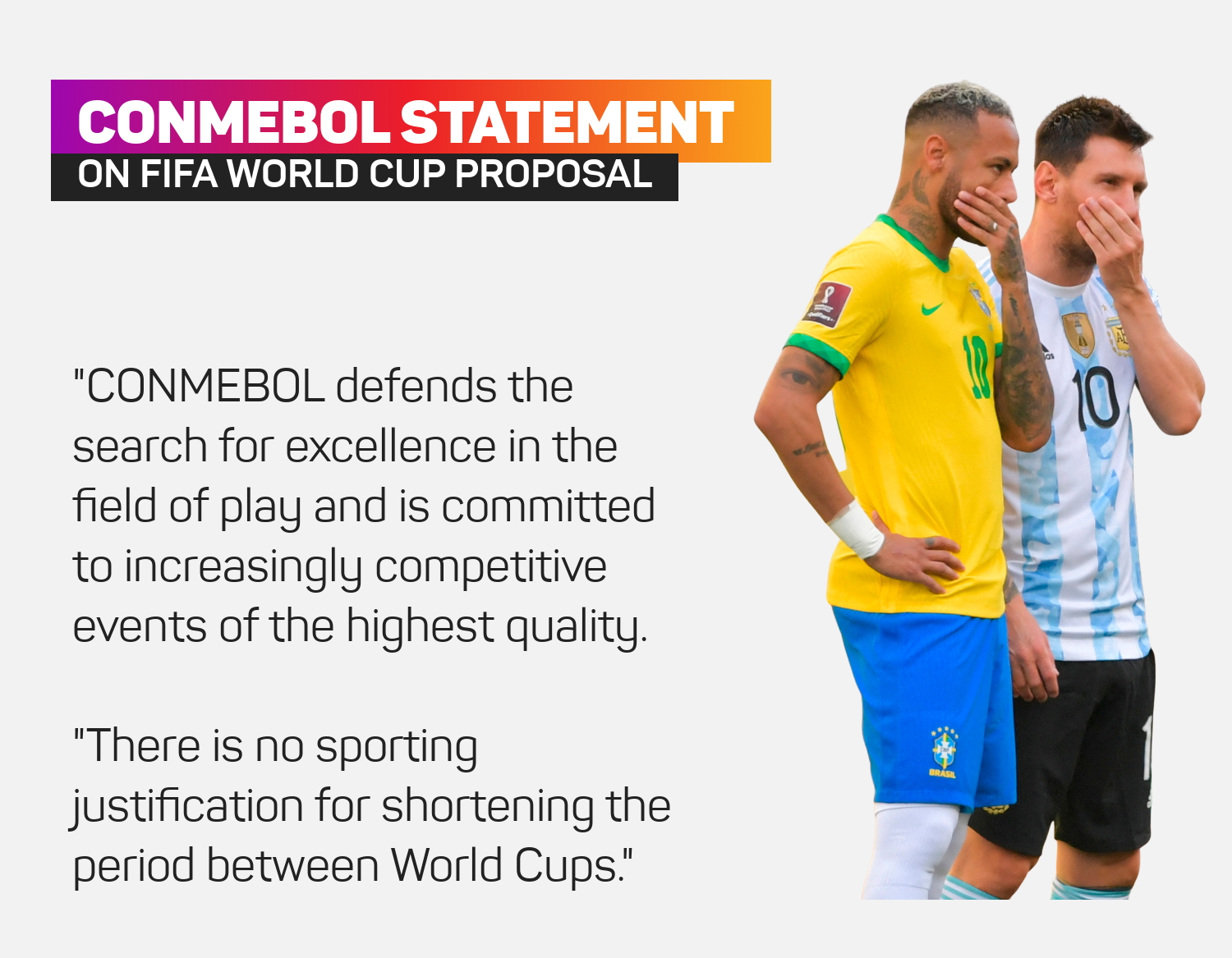 Wenger, who left Arsenal in 2018 after 22 years at the club, insisted he would have backed the plans even had he still been a club manager.

"It's not about me, it is about the proposal to make football better, clearer, more simple and more meaningful to the world.

"I am convinced that the clubs gain in it because they can focus completely, they have their players available for the whole season and the national teams benefit from it as well.

"There's no increase of number of games, there's a better rest period, less travelling and more quality competition. That's why I think this project is really defendable.

"Yesterday I was in a very long meeting with [players union] FIFPRO, we consult everybody. We are conscious that we need to talk to everybody.

"I think I've convinced FIFPRO that in my programme the players were my first worry."

Wenger also rejected the argument that the World Cup will be devalued by being held every two years.

"I'm not on an ego trip. I've been asked to help to shape the calendar of tomorrow, I consult the whole world."

Seven years on from his first Premier League goal for Southampton, Sadio Mane has joined the '100 club'.

Juventus boss Massimiliano Allegri sang the praises of Roma counterpart Jose Mourinho and is pleased to see him back in Serie A.