Steve Nash said "it's not going to be pretty for a little while" after the Brooklyn Nets rallied past the Philadelphia 76ers 114-109 for their first win of the season.

The Nets had never led or tied the 76ers until LaMarcus Aldridge's dunk levelled Friday's NBA clash at 108-108 with 48 seconds remaining in Philadelphia.

Brooklyn, who were blown out by reigning champions the Milwaukee Bucks in their season opener, relied on superstars Kevin Durant and James Harden to eventually see off Eastern Conference rivals the 76ers.

Durant had a triple-double of 29 points, 15 rebounds and 12 assists, while Harden finished with 20 points for the Nets, who closed out the contest on a 16-1 run.

"It's not going to be pretty for a little while here," said Nets head coach Nash in the continued absence of Kyrie Irving (unvaccinated).

"We just got to continue to fight, play for each other and figure out ways to compete and stay engaged while we figure out rotations and combinations and what we are all about." 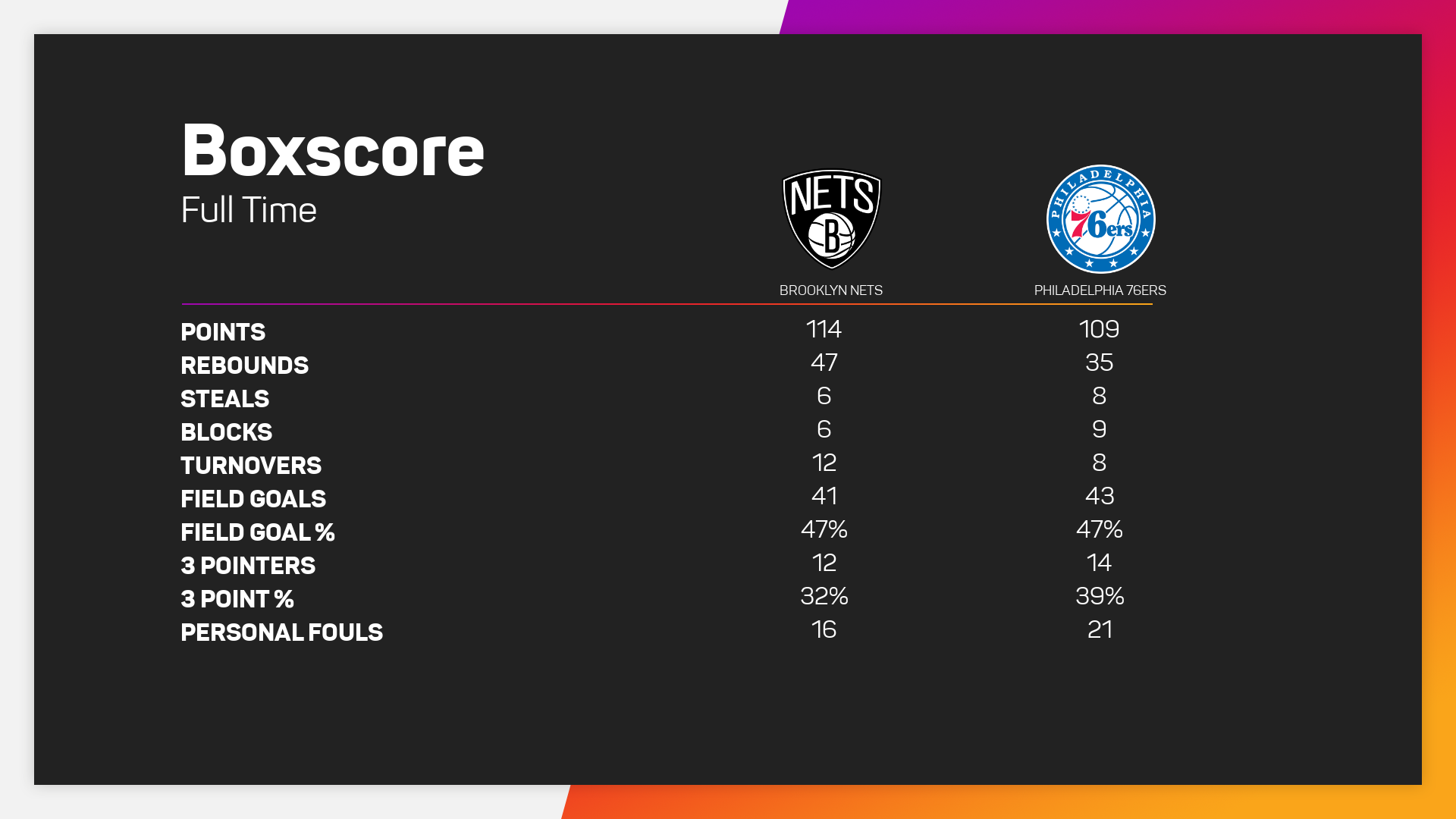 On Durant and Harden, Nash added: "I think they are excited for their new team-mates. But it takes time to find that rhythm and combinations. And also we lost a big piece [Irving].

"It is not just the new pieces, it's the void that we are used to playing with. It is, it is a lot for us to take on at this moment in time. But hopefully in the weeks coming, we start to clear some of the debris so to speak and figure out how we can best play together."

Nets recruit Patty Mills (three-of-three shooting from beyond the arc) became the first player in NBA history to open a season 10-10 from three.

Durant recorded his 13th career triple-double and the former MVP said of playing without Irving: "We wasn't planning on having to do this, but you know, it's good for us to make adjustments.

"It's good for guys who wasn't expecting to play bigger roles to step into those roles and see who we are. This is the situation we were in, and I think a lot of guys have taken advantage of it.

"For James and myself, it feels like each game may be different and we may have to do different things than we thought coming into the season. But it's all good. It's always gonna help us get better."

"Kevin is the same way and one of the best to ever touch a basketball. So we just got to go out there and do what we do and things will work out."

Chelsea and Juventus played out a 0-0 draw on Wednesday as Sam Kerr dealt with a pitch invader.

Kick-off was initially delayed before the match was postponed and pushed back to Thursday in Bergamo.