Merseyside derby: Benitez desperate for a win in Liverpool reunion

Jurgen Klopp faces one of his Liverpool predecessors on Wednesday, with Everton boss Rafael Benitez in desperate need of a victory.

Liverpool have two reunions with fan favourites coming up in the space of 10 days.

While Steven Gerrard will bring his Aston Villa team to Anfield on December 11, Liverpool first make the short trip to Goodison Park to face the manager under which they enjoyed their best spell of the 21st century prior to Jurgen Klopp's arrival.

Rafael Benitez was a contentious appointment, to say the least, when he replaced Carlo Ancelotti at Everton.

After a strong start to his tenure at Goodison Park, a combination of injuries to key players and questionable tactical decisions have left Benitez under pressure.

Everton are on a seven-match winless run in the league, their worst run since 2016, and a streak of just one victory in 10 matches across all competition.

It does not look pretty, the mood around each club could hardly be more different, and the last thing Benitez needs is a reunion with a fanbase that once idolised him and may well be singing his name again on Wednesday. 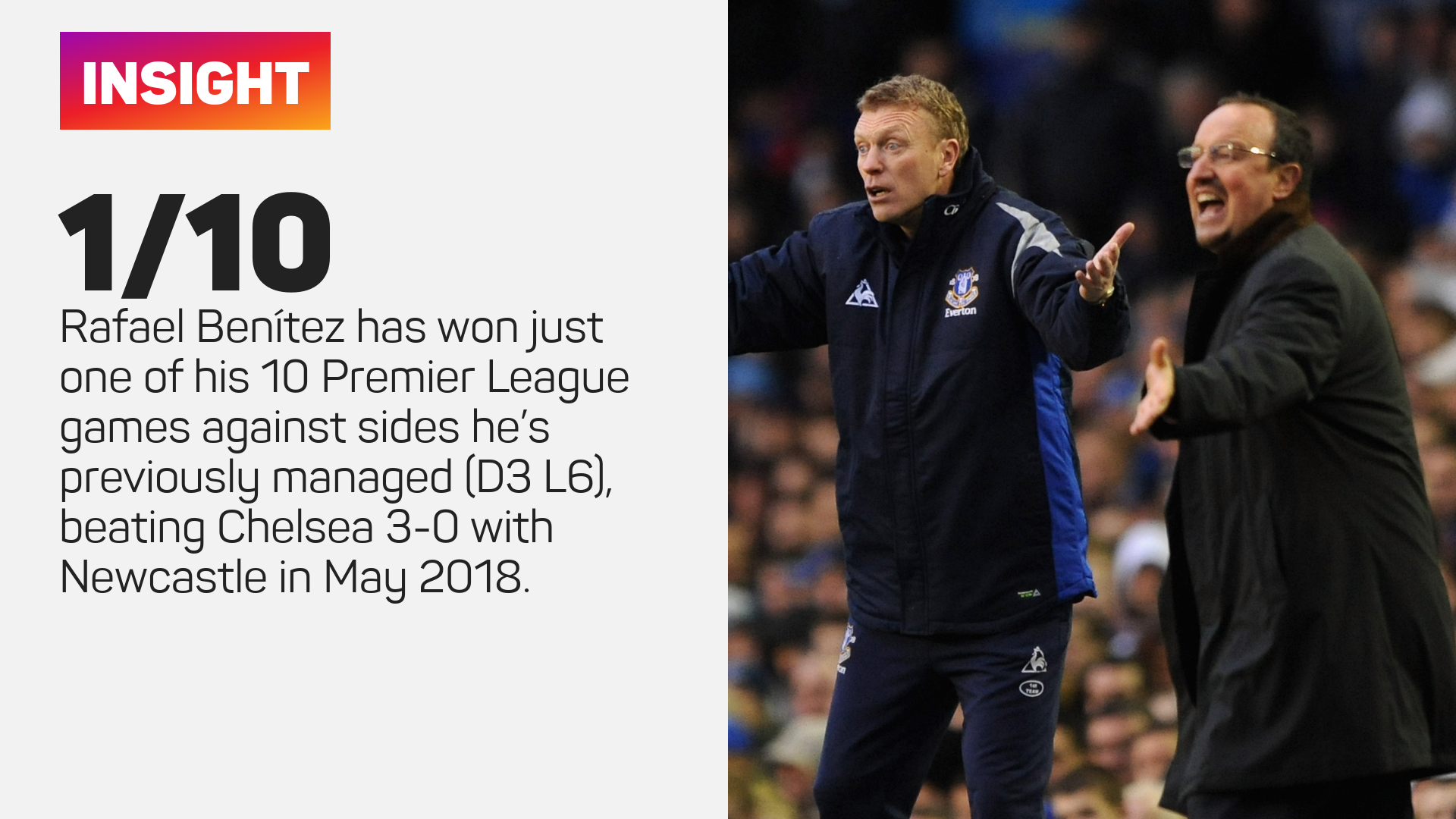 Where did it all go wrong?

Benitez has inherited a mess and Everton's director of football Marcel Brands and majority shareholder Farhad Moshiri must face scrutiny. The Spaniard, however, must ultimately shoulder part of the blame for the current malaise.

Of Everton's Premier League managers, only Howard Kendall (in his ill-fated third spell at the club) and Walter Smith took fewer points than Benitez's tally of 15 across their first 13 league games.

Everton went unbeaten in their three league derbies under Ancelotti, albeit they did suffer a 1-0 loss to very much a second-string Liverpool side in the FA Cup in January 2020.

However, Ancelotti oversaw Everton's first derby victory since October 2010 when the Toffees beat Liverpool 2-0 at Anfield in February, ending a winless run at that ground stretching back to September 1999.

That win at an empty Anfield inflicted a fourth successive home league defeat on Liverpool for the first time since 1923 and left the Merseyside rivals level in the race for Champions League qualification.

Since then, Everton have won just nine of their 27 Premier League outings, losing 11, with Liverpool winning 17 of 26, only suffering three defeats. The Reds have scored 62 goals, 36 more than their city rivals, while only Chelsea's defence is stingier of sides to have been in the top tier for the entirety of that timeframe.

If Evertonians hoped a corner had been turned in February, Klopp's team have proved they are still worlds apart. 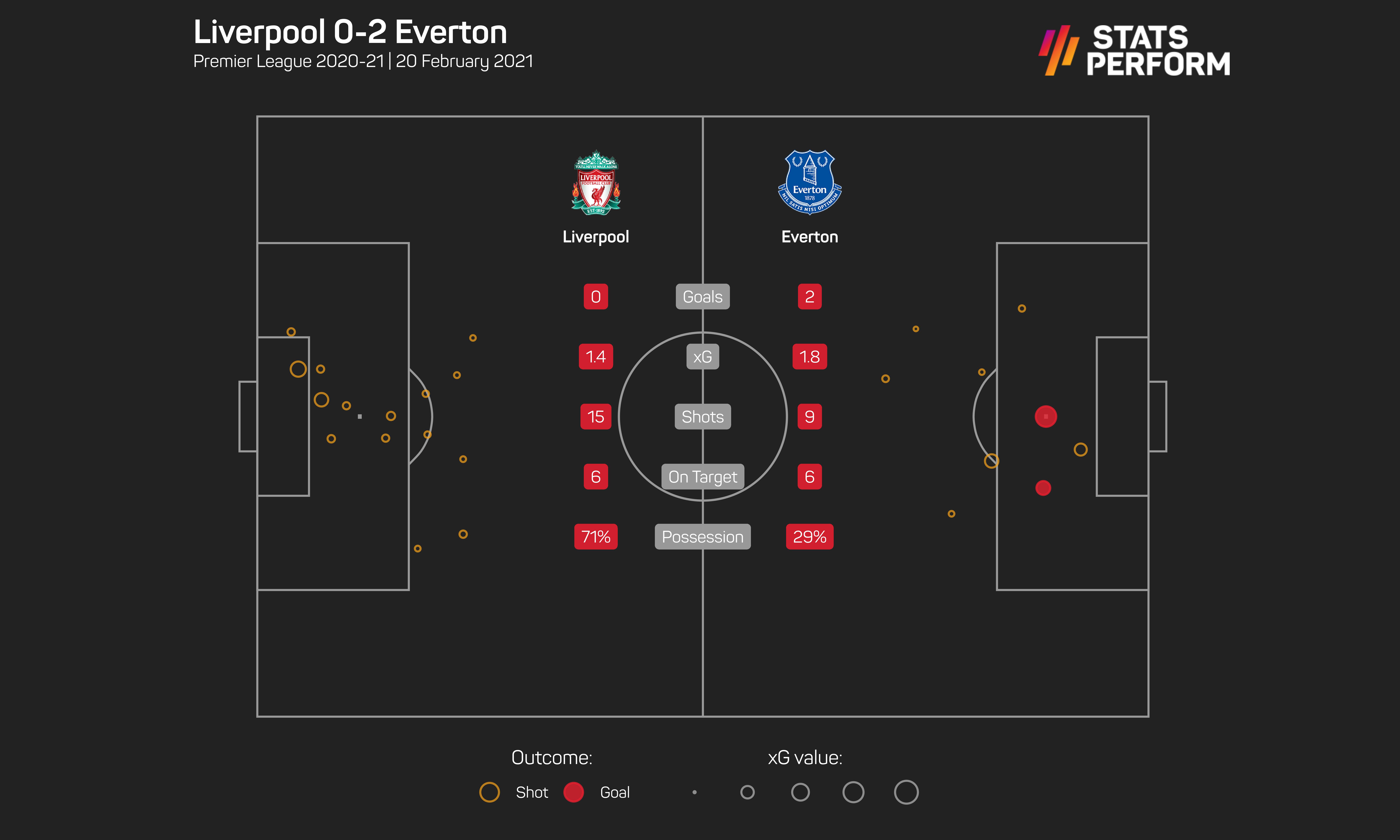 Speaking of Klopp, he has won seven Merseyside derbies since joining Liverpool in 2015, drawing five and suffering that solitary defeat.

Benitez will be the sixth Everton boss Klopp has faced, and the German holds an impressive record over his Liverpool predecessor, winning four of seven meetings, losing just once, when Napoli beat Borussia Dortmund 2-1 in the 2013-14 Champions League group stage.

Liverpool also won their last three league games against Benitez's Newcastle by an aggregate score of 9-2.

This game will take Klopp onto the same amount of Merseyside derbies that Benitez managed as Liverpool boss. The former Real Madrid coach oversaw 14 meetings with David Moyes' Everton, winning eight and losing only three times. The Toffees' failures in this fixture have not been limited to the past decade.

Across the last seven matches, Benitez's team rank 17th for possession (39.5 per cent), joint-18th for shots on target (21) and joint-20th for goals (four), albeit they have underperformed their expected goals (xG) value (7.58) – the absence of Dominic Calvert-Lewin has not helped this.

Liverpool, on the other hand, have scored a league-leading 24 times in that time. Their xG of 16.4 also tops the competition, though it does suggest their finishing is above the standard that would be expected based on the quality of the chances. 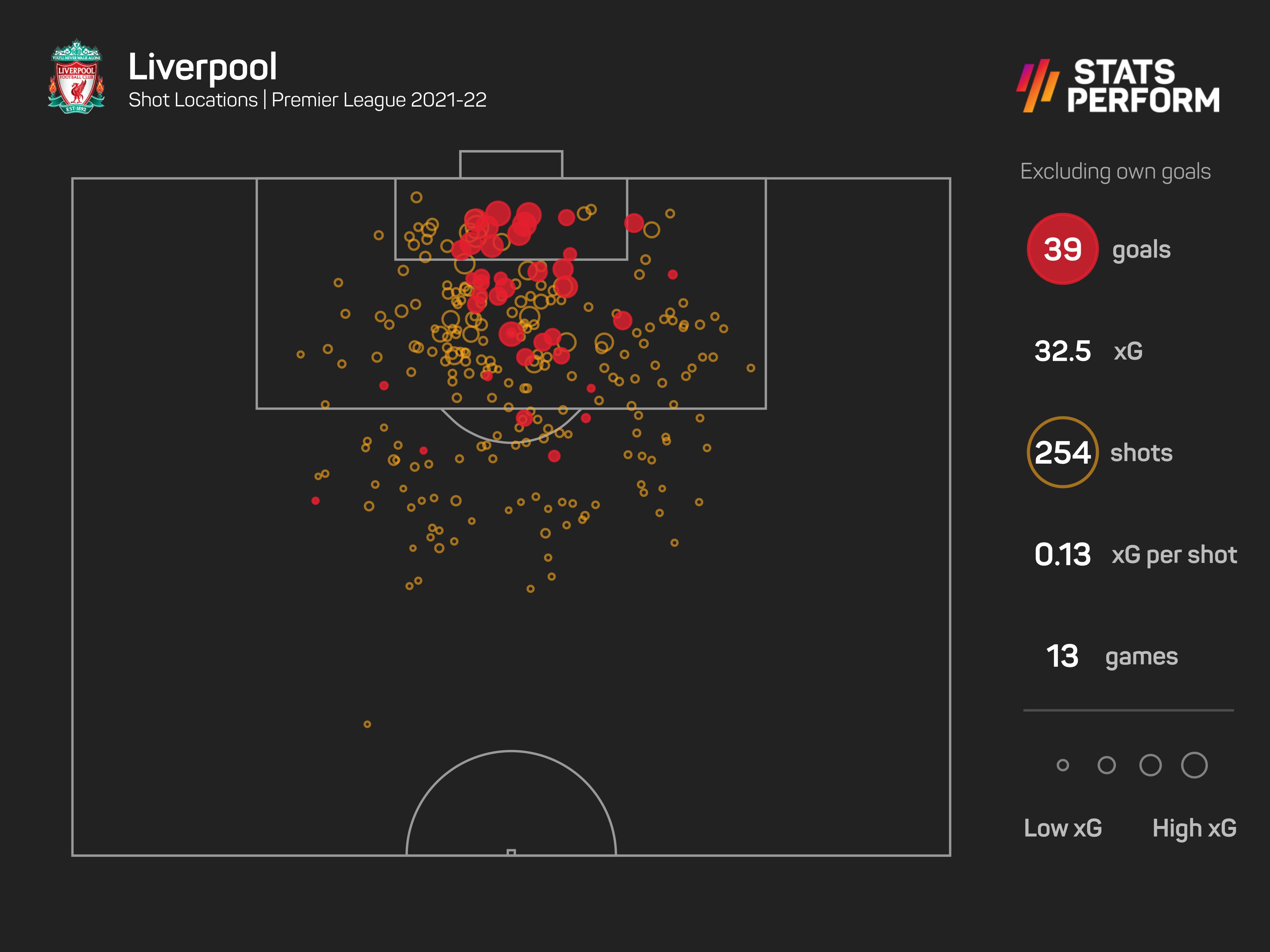 Their high press has been back at its best, with no team producing more high turnovers (sequences that start in open play and begin 40 metres or less from the opponent's goal) than the Reds' 145. Everton's 78 ranks above only Watford (74) and Tottenham (72).

Another concern for Benitez will be Everton's tally of 101 high turnovers against. This ranks 11th in the league, but an issue for the Toffees all season has been an inability to keep the ball for sustained spells, even if it has been their aim to counter-attack. Their number of sequences of 10+ passes stands at 63 (16th). Liverpool's total is 220, placing them behind only Manchester City (283).

Everton had just 22.7 per cent of the ball in their recent 3-0 defeat to Manchester City, allowing 17 shots. It is hard to imagine Wednesday's statistics turning out much differently.

Mohamed Salah came seventh in the Ballon d'Or voting but if he continues his current form into 2022 then he could be a shoo-in for next year's award. He has been sensational, scoring 17 times in 18 appearances across all competitions, and also leads the league in assists (eight).

Salah scores every 92 minutes, on average, while Sadio Mane has bounced back from his struggles last season with seven league goals.

Mane has played in 14 derbies, contributing to seven goals, scoring five himself, while Salah has netted twice across five appearances against Everton. 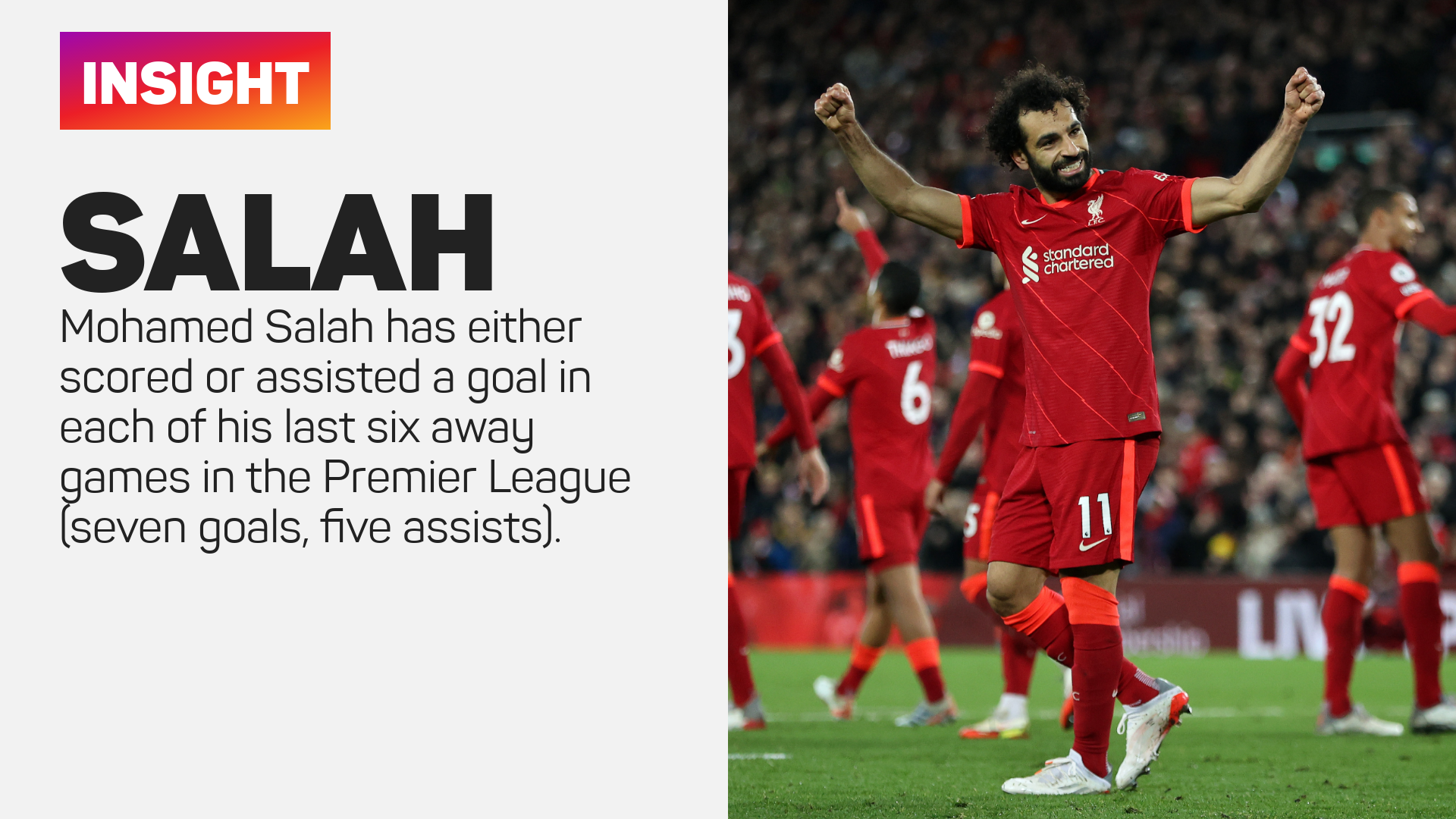 While Liverpool's talismanic duo head into Wednesday's fixture in fine fettle, Everton are in the midst of an injury crisis that has exposed their weak squad.

Richarlison should return from suspension and Abdoulaye Doucoure played at Brentford, but Calvert-Lewin and Yerry Mina remain out.

Calvert-Lewin has been a huge miss but the influence of Doucoure and Mina should not be understated.

Liverpool's last league win over Everton came on December 4, 2019, a 5-2 thrashing at Anfield marking the end of Marco Silva's tenure.

Eight of Liverpool's last nine top-tier trips to Goodison have finished level but, unless Benitez can pull off an unexpected result, his fate may be similar.