It was a modest record for a player as magnificent as Lionel Messi: three games, two final defeats, one red card, no goals.

But the Barcelona great's Copa America performances against Chile prior to Monday's curtain-raising clash were not entirely out of keeping with the rest of his Argentina career.

There have been moments of magic, of course, but just 15 goals across 46 Copa America and World Cup appearances ahead of this game. Meanwhile, not since 2007-08 has Messi fallen short of averaging a goal every two games for Barca, let alone one every three.

Even Messi himself could not reasonably argue his international displays have come close to the standard set at club level.

And while World Cup failures will always remain at the forefront of any such discussion – his achievements in contrast to Diego Maradona's one-man show in 1986 – the Copa America has provided its fair share of pain.

The final defeats to Chile in 2015 and 2016 were among three for Messi and four for Argentina since their 14th and most recent title in 1993.

Those two in consecutive years both came courtesy of penalty shoot-outs. Messi scored his spot-kick in the first match but missed the following year, setting his side on their way to another sore setback.

It was fitting then, it seemed, that this latest campaign – surely one of Messi's last – would start against Chile and initially start in much more encouraging fashion.

Neymar had set the standard against Venezuela the previous day.

In front of empty, hushed stands that make it impossible to ignore the influence of politics in football – a popular topic of debate in 2021 – the pace was ponderous until the world's most expensive footballer got to work.

Neymar scored one and created another in a 3-0 Brazil win. Along with five shots, he created seven chances – the most of any Selecao player in a Copa America match since his debut.

It took 33 minutes, in which the absence of an atmosphere again jarred, but Messi rose to that challenge when presented with a free-kick in a central position, dipped over the wall and beyond the grasp of Claudio Bravo.

That was one of seven Messi shots and he played four key passes, too. On paper, this ranked alongside Neymar's efforts. 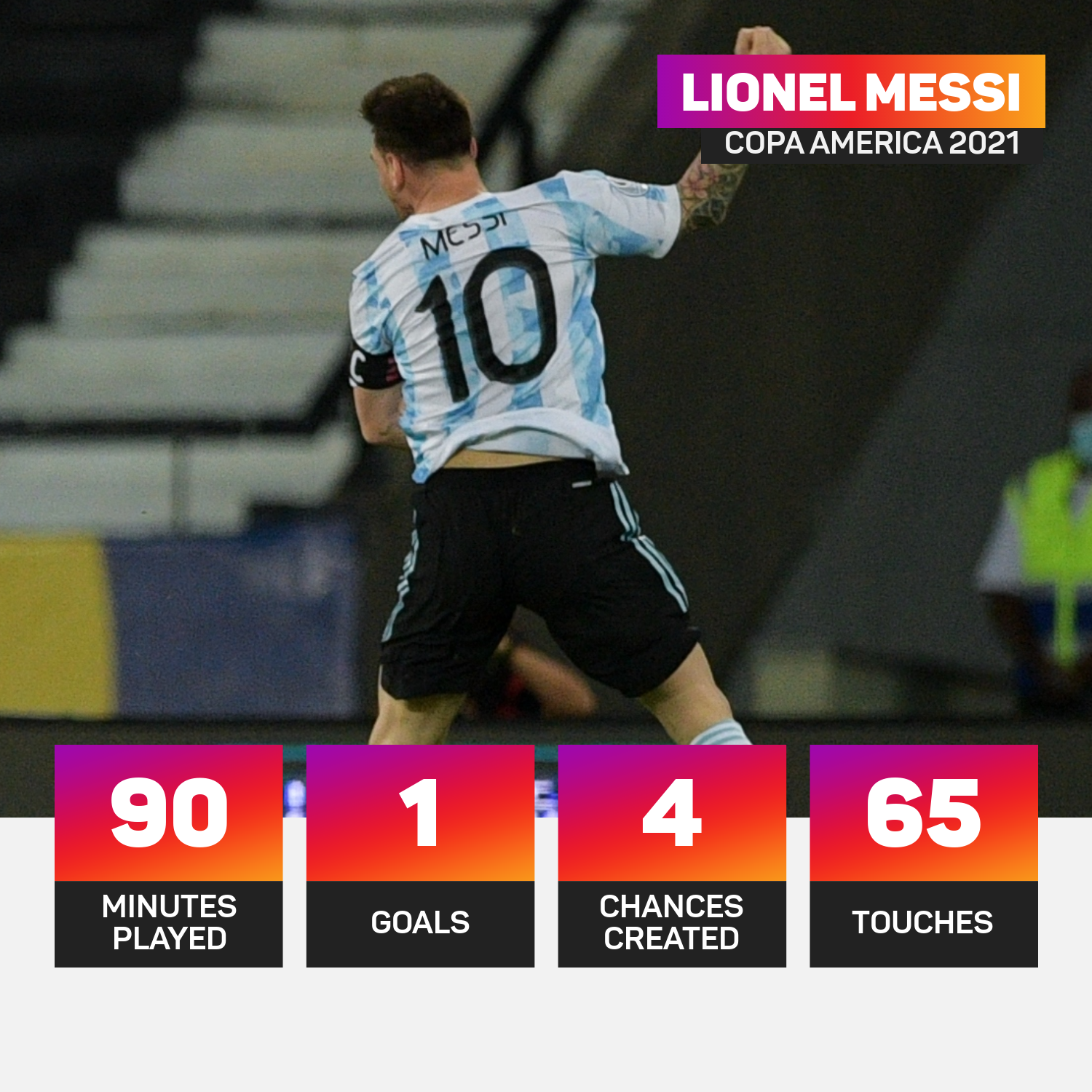 By full-time, though, it was a frustratingly familiar tale, as the supporting cast proved unable to suitably assist their superstar.

Messi's excellence has excused a whole generation of Argentina internationals, absolved of blame because their great number 10 should have been able to win major tournaments alone.

Too many hugely talented players have misfired on the big stage; Lionel Scaloni sent out some past and present examples.

Lautaro Martinez is supposed to be the face of a young, new team. He had 11 goals in 23 prior internationals and should have added to that tally more than once in Rio de Janeiro.

The Inter forward failed to hit the target with any of his three attempts and optimistically appealed for a foul following two of them when he inexplicably missed from point-blank range.

And Martinez's frustration unfortunately came to the fore after 62 minutes when he lunged into an awful challenge on Charles Aranguiz under the nose of the referee and escaped with a booking.

The 23-year-old's evening might have ended early with a red card. Instead, it was cut short by the introduction of Sergio Aguero.

Chile had equalised five minutes prior to Martinez's moment of madness, one of a series of rash attempted tackles punished as a VAR review found Nicolas Tagliafico had made contact with Arturo Vidal in the area.

Vidal took the penalty and Emiliano Martinez turned it onto the crossbar, but Eduardo Vargas was on hand to nod in his 13th Copa America goal – staying three clear of Messi and climbing into the top 10 all-time.

Aguero followed Angel Di Maria onto the pitch as Argentina sought a response. Both players were not so long ago out of the picture under Scaloni, having previously been part of the Messi-led team that repeatedly came up short.

In each Chile final, Di Maria started. Aguero was introduced from the bench in one and in the XI for the other.

As on those occasions, there were no heroics from either on Monday. Di Maria, now 33, had two shots but neither troubled Bravo. Aguero, also 33, was caught offside once.

Messi will be the story if Argentina do not deliver silverware in the coming weeks, just as he will be should they finally get over the hump.

But the same problems persist. When Messi's free-kick set the stage, it was Martinez who could not step up, underwhelming again like too many past Argentina attackers.

If this is to be the tournament in which Messi reaches his promised land, he is going to need some help.

Tokyo Olympics: Team USA have winning streak snapped as France cause an upset

Evan Fournier starred with 28 points for France as the United States were beaten at the Olympics for the first time since 2004.

American Keyshawn Davis says a gold medal is the only thing missing from his resume and he plans to change that at the Tokyo Olympics.

Malaysian artistic gymnast Farah Ann Abdul Hadi couldn't hold back her tears after not making it into the women's individual all-around final at the 2020 Olympic Games.