Juventus' slim hopes of being involved in the Serie A title race continue to fade, with Duvan Zapata condemning them to defeat in Turin.

Juventus fell further off the pace in Serie A as they slipped to a 1-0 home defeat against Atalanta.

Massimiliano Allegri's side were thumped 4-0 by Chelsea in the Champions League on Tuesday and were unable to respond with a victory at Allianz Stadium.

Duvan Zapata netted the decisive goal midway through the first half, taking advantage of sloppy Juve defending to hammer in his ninth league goal of the season.

Paulo Dybala was inches away from rescuing a point in stoppage time with a wicked free-kick that hit the crossbar, but Juve ultimately suffered a fifth league defeat of the 2021-22 campaign. 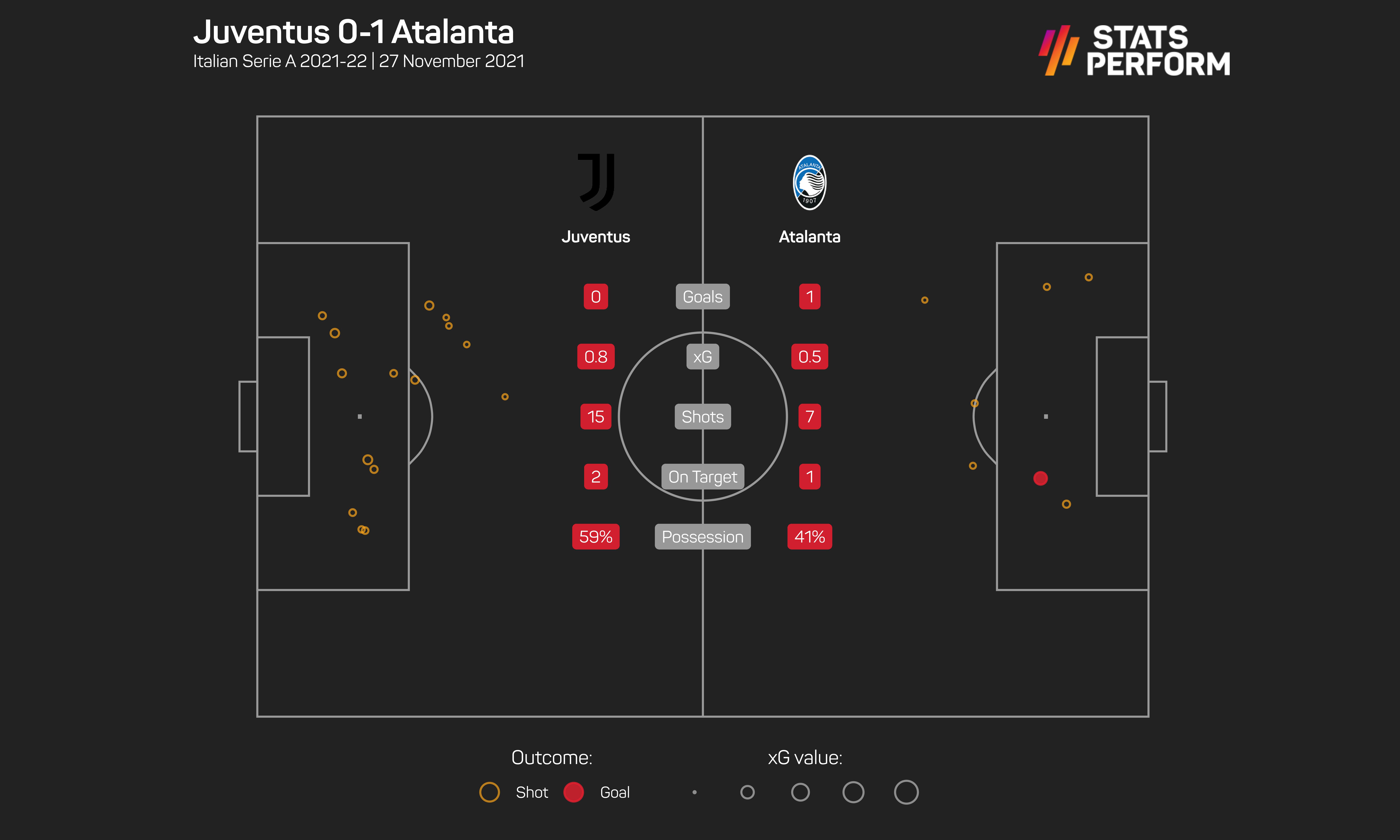 Earlier, Dybala's 10th-minute effort straight at Juan Musso punctuated an aggressive start from Atalanta, who twice went close in the opening stages, and it was the visitors who struck in the 28th minute.

Berat Djimsiti's pass caught Juve's defence napping and, having been played onside by Matthijs de Ligt, Zapata lashed a thumping effort in off the bar.

Dybala spurned a swift chance to respond, though Juve could easily have been two behind by the break had Matteo Pessina capitalised on Wojciech Szczesny's dreadful clearance.

Juve were dealt a further blow by an injury to Federico Chiesa, who did not return for the second half, and it was not until Leonardo Bonucci played in Weston McKennie before the hour that they crafted an opening.

Djimsiti was on hand to block the midfielder's path to goal, with McKennie suffering a knock in the process, ending his involvement.

Musso did brilliantly to steer Adrien Rabiot's effort beyond the post soon after, while Bonucci headed well wide from a corner.

Atalanta wanted a penalty for Juan Cuadrado's clumsy block on Mario Pasalic, and Juve had a late chance to make their fortune count when Zapata fouled Federico Bernardeschi. Dybala's free-kick had Musso beaten, but the woodwork ensured Atalanta claimed a first league win at Juve since 1989.

What does it mean? Juve a shadow of their former selves

The gulf in quality between Chelsea and Juventus in midweek will have been a chastening experience for Allegri, but if the Bianconeri are not careful, they might well be hard pushed to qualify for the Champions League next season, barring of course a remarkable run to glory in Europe this term – that seems unlikely, however.

They sit eighth in Italy, 11 points adrift of league leaders Napoli and second-placed Milan, who both play on Sunday. Atalanta, with this triumph – their first Serie A away win at Juve in 25 attempts – are seven points above Allegri's men, in fourth.

Zapata back to haunt Juve once more

Since the start of 2017, Zapata has scored eight goals in 11 appearances against Juve across all competitions, more than any other player in the same timeframe.

Anywhere but home for Juve

Juve have now lost three of their first seven home games in Serie A this season. It equals their worst such total so early in a top-flight campaign, matching poor runs from 1956-57 and 1948-49.

- Atalanta's last away league win at Juve came in October 1989, when they prevailed 1-0 thanks to a Claudio Caniggia goal.
- Atalanta have won six out of seven Serie A away games this season, the highest proportion of all teams in Europe's top five leagues.
- Juventus have lost three home league matches, which is as many as they suffered in the entire 2020-21 Serie A campaign.
- Since the beginning of October, only Bayern Munich's Robert Lewandowski (12) has scored more across all competitions than Zapata (9 goals in 11 matches), among all players from the big five European leagues.
- Zapata has netted in each of his last seven matches with Atalanta in all competitions, his second best streak with this club (after a streak of 10 games in a row ended in January 2019).
- Atalanta have scored the most goals (16) in the first half of games in Serie A this season.

Juve have an ideal chance to recover when they travel to lowly Salernitana on Tuesday, while Atalanta host Venezia on the same evening.