Juventus scored just twice in their win over Genoa, despite taking 27 shots, much to Massimiliano Allegri's frustration.

Massimiliano Allegri acknowledged Juventus have to sharpen up in front of goal following their 2-0 Serie A win over toothless Genoa on Sunday.

Juventus were in dominant form at Allianz Stadium – tallying 27 shots – but a combination of superb goalkeeping from Genoa's Salvatore Sirigu and wasteful finishing ensured the scoreline did not truly reflect the hosts' superiority.

Such was Juve's dominance, Genoa finished the game with an expected goals return of zero after failing to register a single shot – the club are yet to score in the four games since Andriy Shevchenko was named head coach.

It was the first time Juve have not faced a shot in a game in Serie A since Opta started collecting such data in 2004.

Sirigu's 10 saves was the joint-most made by a goalkeeper in a single match in the top five European leagues this season, with Allegri accepting his side need to be more ruthless.

"I think we wanted to reinforce our position when it comes to percentage of scoring opportunities converted into goals," the Juve head coach jokingly told DAZN. "We're the worst in Serie A, I think, so wanted to consolidate those statistics!

"I enjoyed watching the team play this evening, as I have done in other games, even when we lost. We can only improve our effectiveness in front of goal, that’s for sure." 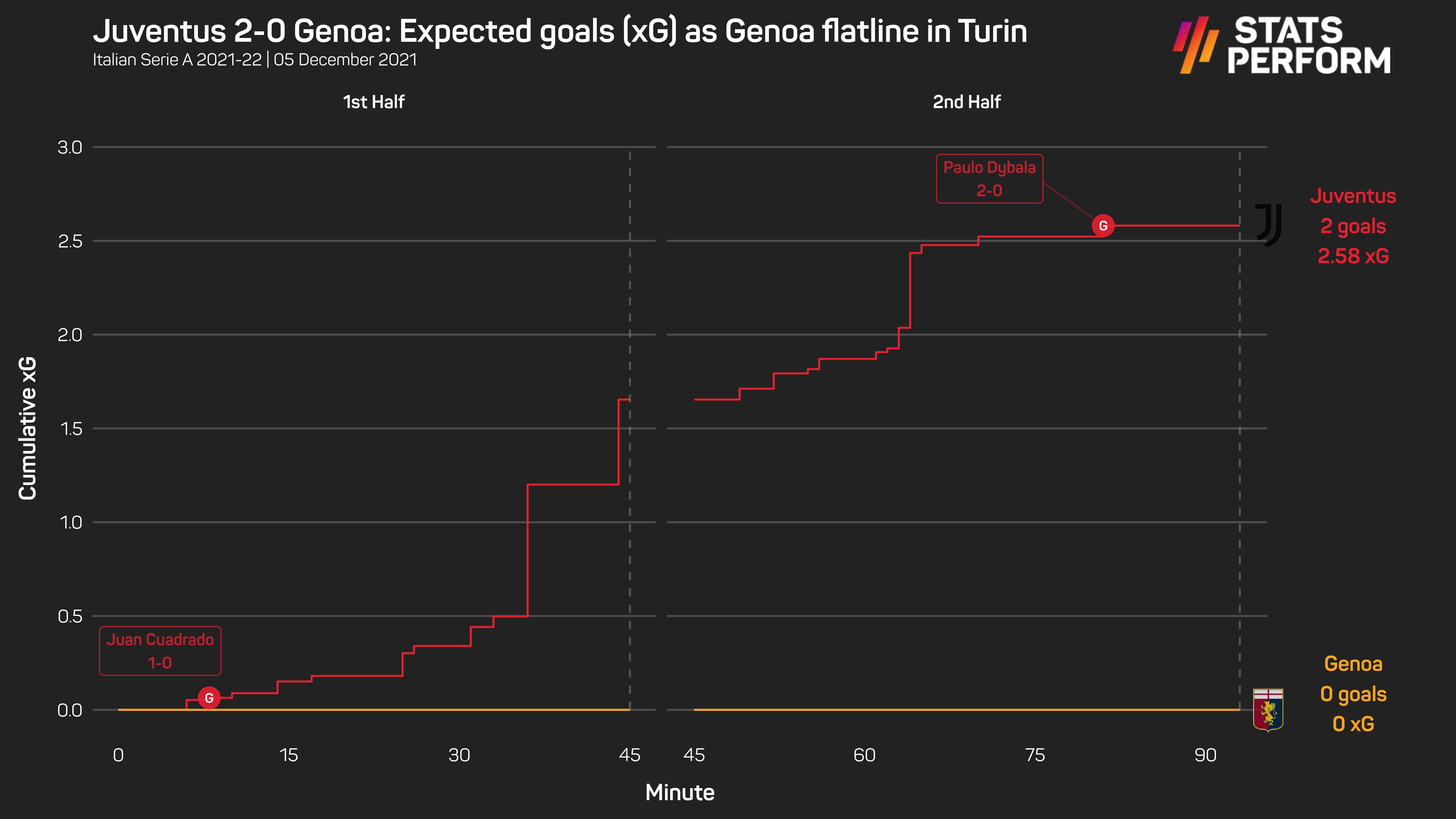 Allegri was involved in a heated exchange of words with forward Alvaro Morata when he was hauled off for Moise Kean in the 73rd minute, moments after receiving a yellow card for dissent.

The Juve boss did not expand on the specifics of their row, but said the Spain international was brought off for his own good.

"He was booked and he was continuing to argue and so I preferred to take him off," added Allegri.

"It's disappointing as Alvaro had played well and so did the whole team."

The victory was Allegri's 250th in Serie A (150th with Juventus), making him just the second coach to reach that landmark in the competition in the three-points-per-win era, after Carlo Ancelotti (275).

It marked Juve's fourth win in five Serie A games, yet they are still seven points adrift of fourth-placed Atalanta.

Allegri is not throwing the towel in yet, though, insisting Juve will keep fighting on all fronts this season.

"At this moment, we are fifth along with Fiorentina," he said. "It was important to win today; the top four are doing very well and currently deserve their positions. I don't know what will happen at the end of the season, if things will change.

"We have our objectives, in Serie A, the Champions League and the Coppa Italia, so we'll get there step by step, one game at a time."

Juve, who have already qualified for the Champions League knock-out stage, wrap up their Group H campaign at home to Malmo on Wednesday before a trip to Venezia in Serie A on Saturday.