Forget the Ballon d'Or, Lewandowski – Haaland and Dortmund are coming for you

Robert Lewandowski must put Ballon d'Or disappointment behind him – Borussia Dortmund and Erling Haaland have ambitions of their own.

Whatever your views on the Ballon d'Or this year, chances are you saw Messi beating Robert Lewandowski to the prize and thought it was at least worthy of discussion. Robbed of the chance to claim it last year when France Football cancelled it – hence Messi's magnanimous suggestion to the organisers – Lewandowski suited up for this year's gala having scored 53 goals in all competitions in 2021, at least 15 more than anyone else, with a new single-season Bundesliga scoring record in his pocket and yet another league title with Bayern Munich. And all after winning the treble the season before. And it was only good enough for second place.

Now isn't the time for Lewandowski to dwell on disappointment, though. There's the small matter of the Klassiker on Saturday: Bayern are only a point above Borussia Dortmund at the top of the table, suggesting that maybe, just maybe, a real title race is on the cards again. Plus, Dortmund have fit-again Erling Haaland back among the goals – and ready to give chase to Lewandowski's goalscoring benchmark.

After the Ballon d'Or disappointment, and with Dortmund and Haaland breathing down his neck, this would be a good time for Lewandowski to start laying a claim for the 2022 prize...

There are some great rivalries in the Bundesliga, but this game is truly a German institution.

Dortmund and Bayern have met each other 129 times – it's the most frequently played match in German professional football history. Bayern have lost more often to Dortmund than any other side (32 times); likewise, nobody has beaten BVB as often as Bayern (63 times).

Recent history has been firmly on Bayern's side (even ignoring their nine consecutive league titles since Dortmund's last one in 2012). The champions have won each of the past six Klassikers, and all of the previous three on Dortmund's home turf. BVB have only lost four in a row at home to the same team on two occasions: against Hamburg from 1982-84, and against Juventus from 1993-2015. 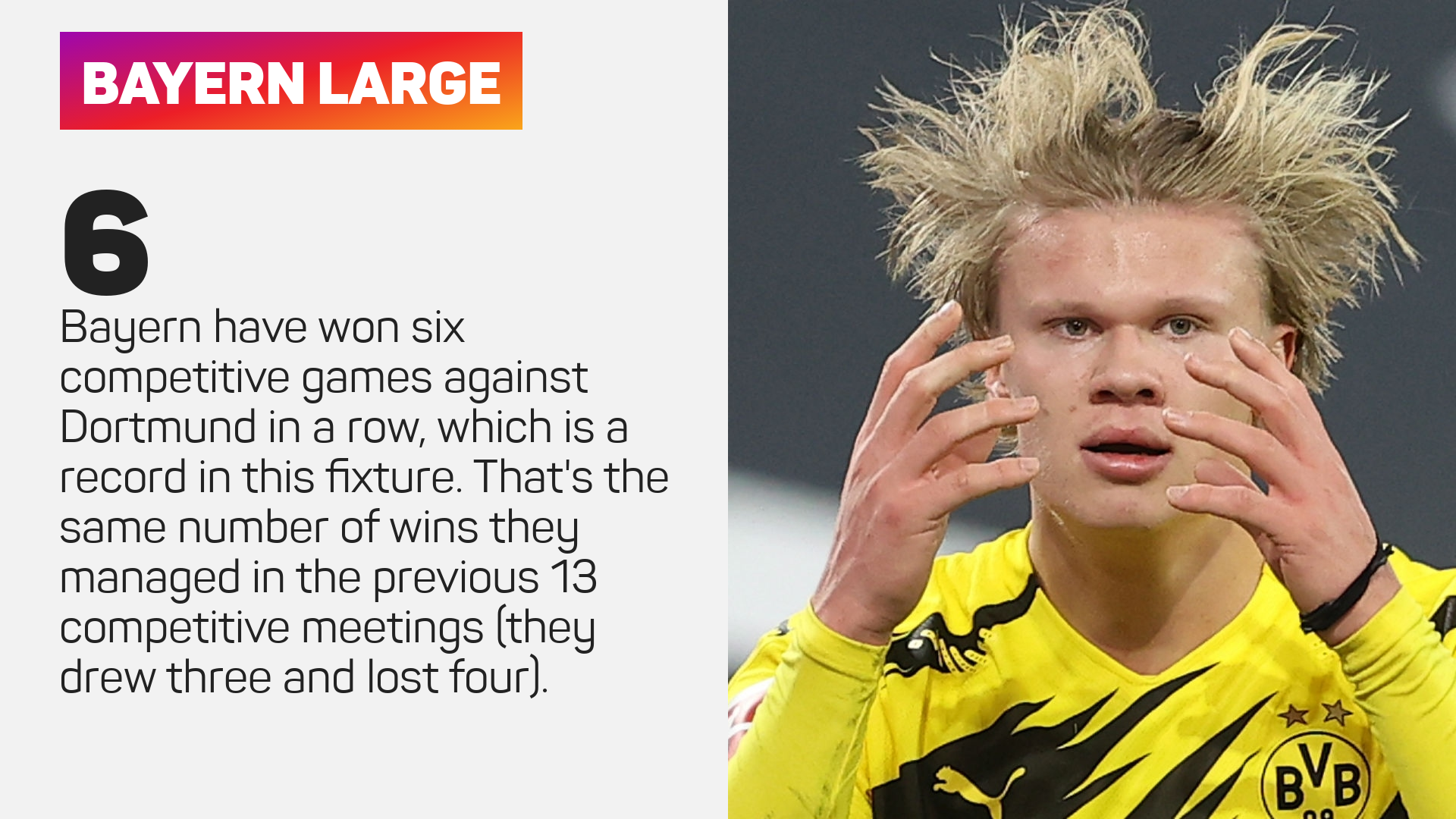 Perhaps things will be different this time. After all, Dortmund have won seven home games in a row at the start of this season, something they have never achieved before. Beating Bayern would see them equal their club record of 12 consecutive home league victories, and few would argue it's impossible: with 30 points from 13 games, this is their third-best start to a season in the era of three points for a win.

With just a point separating them in the table, former Bayern defender Patrik Andersson certainly sees it being a close encounter. "First of all, when you see that Bayern lost against Augsburg, now it's only one point... I think it will be a decider, for the moment," he told Stats Perform.

Consider, too, Julian Nagelsmann's record against Dortmund. The Bayern boss has only managed one win in 11 Bundesliga meetings with Dortmund, his points-per-game average of 0.64 the lowest he has against any opposition. And while Bayern are enjoying their best Bundesliga season for six years (31 points in 13 games), scoring 42 times in that run – the second-best return in their history – they have managed precisely zero clean sheets in nine away league games. The last time that happened was in a 12-game run in 2010-11, during which Louis van Gaal was sacked as coach.

And that's before we come to Haaland, and the man in whose wake he treads – a pair who scored five of the six goals in the previous league meeting of these sides.

Since the start of last season, Lewandowski has scored 73 goals in 60 games in all competitions, more than anyone else in Europe's top five leagues. His nearest rival, with 55 goals in 50 games, is Haaland.

Lewandowski's tally comes from a figure of 61.43 expected goals, meaning he is outperforming his expected output by 11.57, the biggest such differential in those top European leagues. Behind him come Karim Benzema on 9.33, Son Heung-min on 9.26, and Haaland on 9.11.

Among players to score at least 20 times since the start of 2020-21, Lewandowski boasts the second-best shot conversion rate (28.7 per cent). Top of that list is Haaland, the only man with a figure of more than 30 per cent (30.4).

By all meaningful measures, these two are the best goalscoring number nines in Europe, and have been for some time. 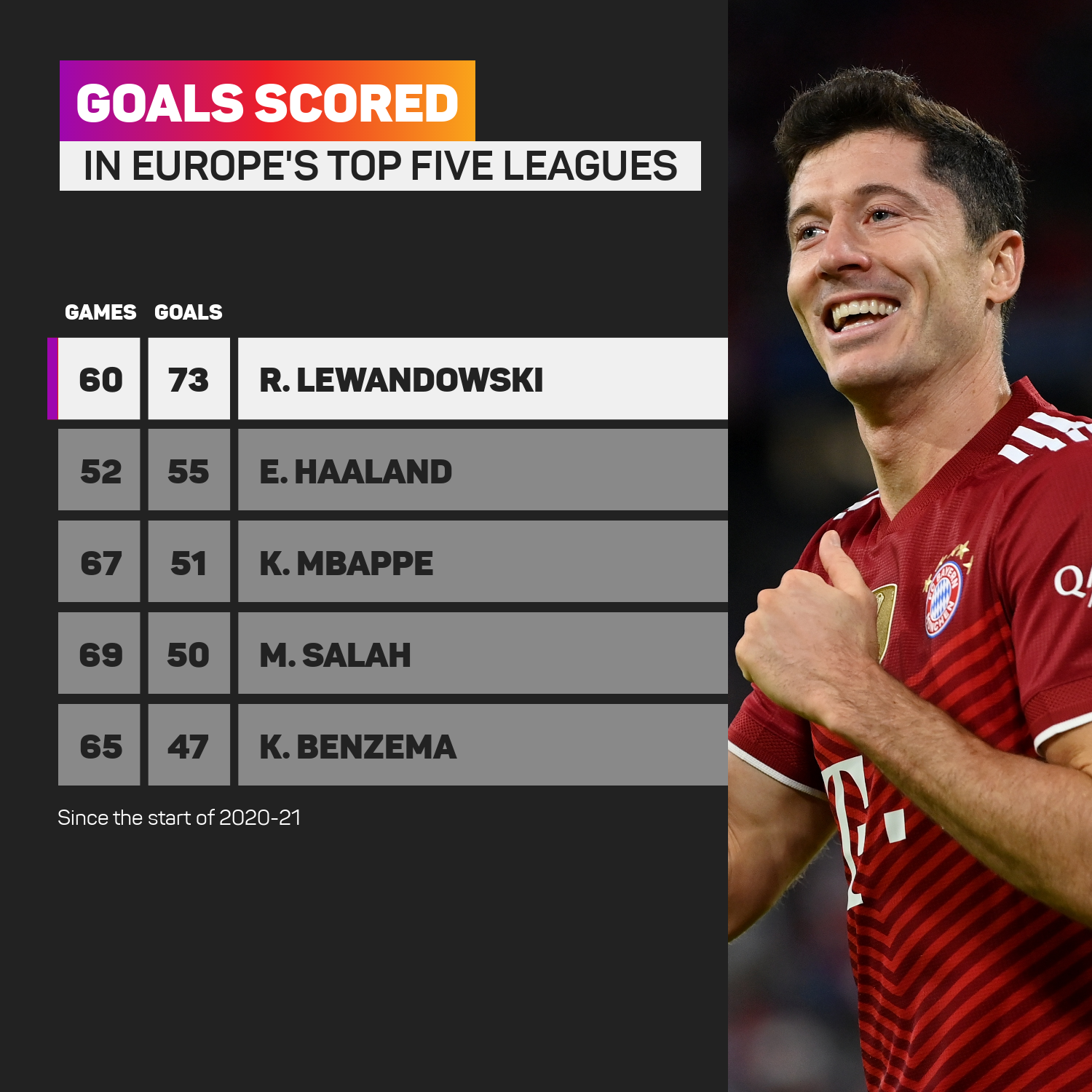 Haaland, of course, missed around a month of this season through injury and only returned against Wolfsburg last week. Naturally, he scored, becoming the youngest player in Bundesliga history to reach 50 goals and the only man to hit that milestone in as few as 50 games. Take away his league goals in 2021-22, and Dortmund would have six points fewer.

Lewandowski has already plundered 25 in just 20 games this term, 14 of which have come in the league. Without those, Bayern would be five points worse off, and we'd be talking about Bayer Leverkusen's chances of a first Bundesliga title.

Dortmund need no reminders about their old striker's prowess, of course. Lewandowski has scored 24 times against his former club, making them his favourite opposition alongside Wolfsburg. Should he score this weekend at Signal Iduna Park, he would match Klaus Fischer's record of 117 away goals scored in Bundesliga history – and in 83 fewer appearances. 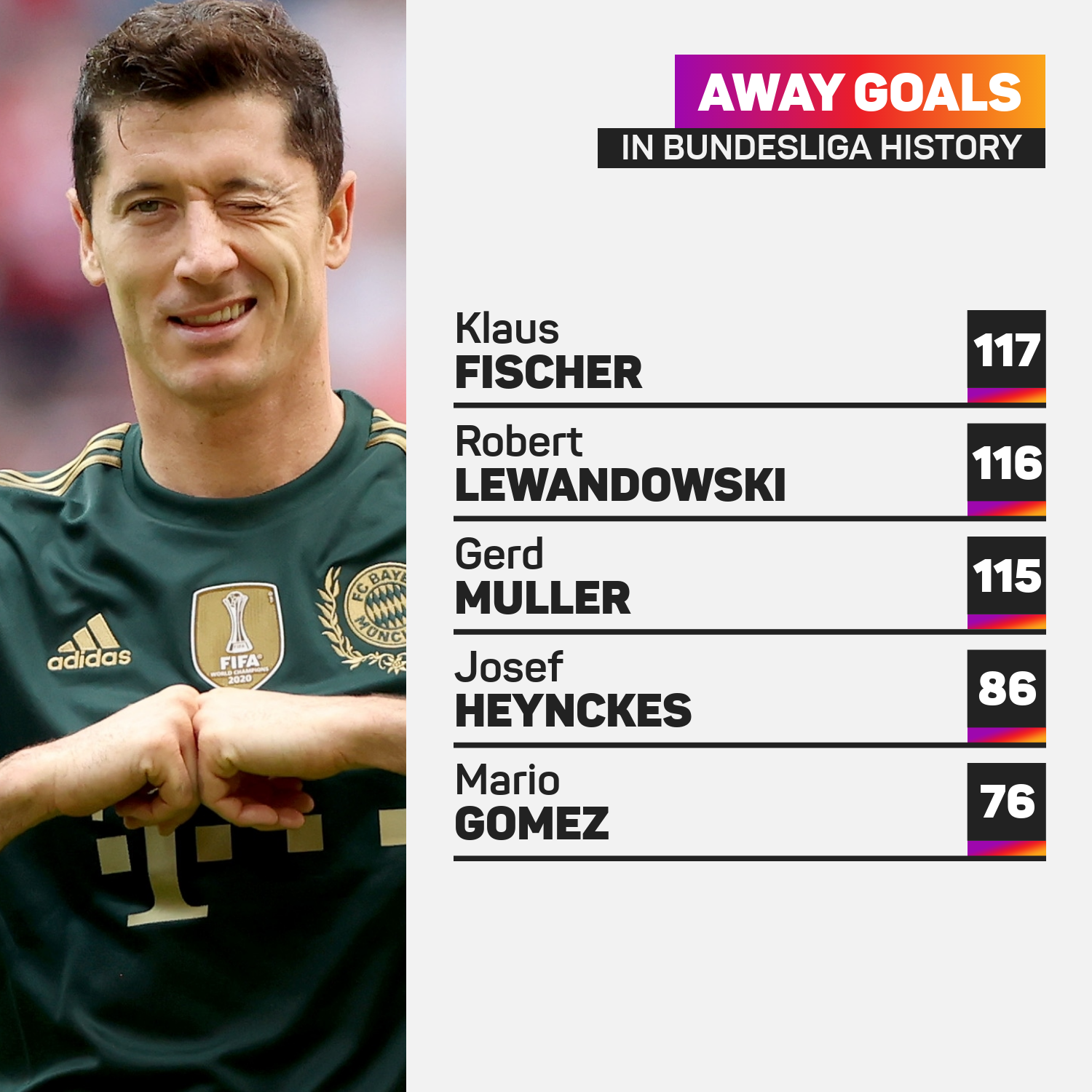 For Lewandowski, this match represents a quick opportunity to remind everyone not only why he should have won this year's Ballon d'Or, but why he should be favourite for next year's, too. Firing Bayern to victory would also bolster their chances of a remarkable 10th league title in a row, and put in his place the young pretender to his throne as football's greatest marksman.

And make no mistake: Haaland is coming for that title, and more besides.