Simon Rolfes speaks about Florian Wirtz as Stats Perform looks at the numbers behind the Leverkusen star ahead of the Bayern clash.

"If you have the ambition and quality, we count on you and give you the chance to develop. With development, there is also performance. That's why it's a great story for Florian but also for us as a club," Simon Rolfes told Stats Perform.

Bayer Leverkusen had money to splash after Chelsea paid a club-record fee to prise German star Kai Havertz from BayArena at the start of 2020-21. His absence was supposed to leave a glaring hole in North Rhine-Westphalia and prompt a frantic search in the transfer market.

But sporting director Rolfes and Leverkusen had other ideas. Rather than use the money recouped in the blockbuster Havertz transfer, Die Werkself opted to look in their own backyard for a replacement – 18-year-old teenage sensation Florian Wirtz.

Leverkusen's faith in youth and their clearly defined philosophy has served them well previously, and they're being rewarded once again by the club's latest wonderkid, who has put Havertz well and truly in the rear-view mirror as Europe's elite queue for his signature.

At home in the number 10 role behind a striker or even as a deep-lying playmaker, Wirtz can do it all on the pitch – as next opponents Bayern Munich may find out on Sunday.

Leverkusen prised Wirtz from Cologne in 2020. Dubbed "the best midfielder to come through the club in 30 years" by local newspaper Kolner Express, Bayern, Borussia Dortmund, RB Leipzig and Liverpool were all circling after Wirtz captained boyhood team Cologne to Under-17 German Championship glory in 2019, but Leverkusen eventually won the race.

Rolfes had first watched Wirtz at the age of 13. He was immediately mesmerised by the Brauweiler-born sensation, who has firmly established himself in the Leverkusen XI, quickly becoming the new face of Die Werkself. 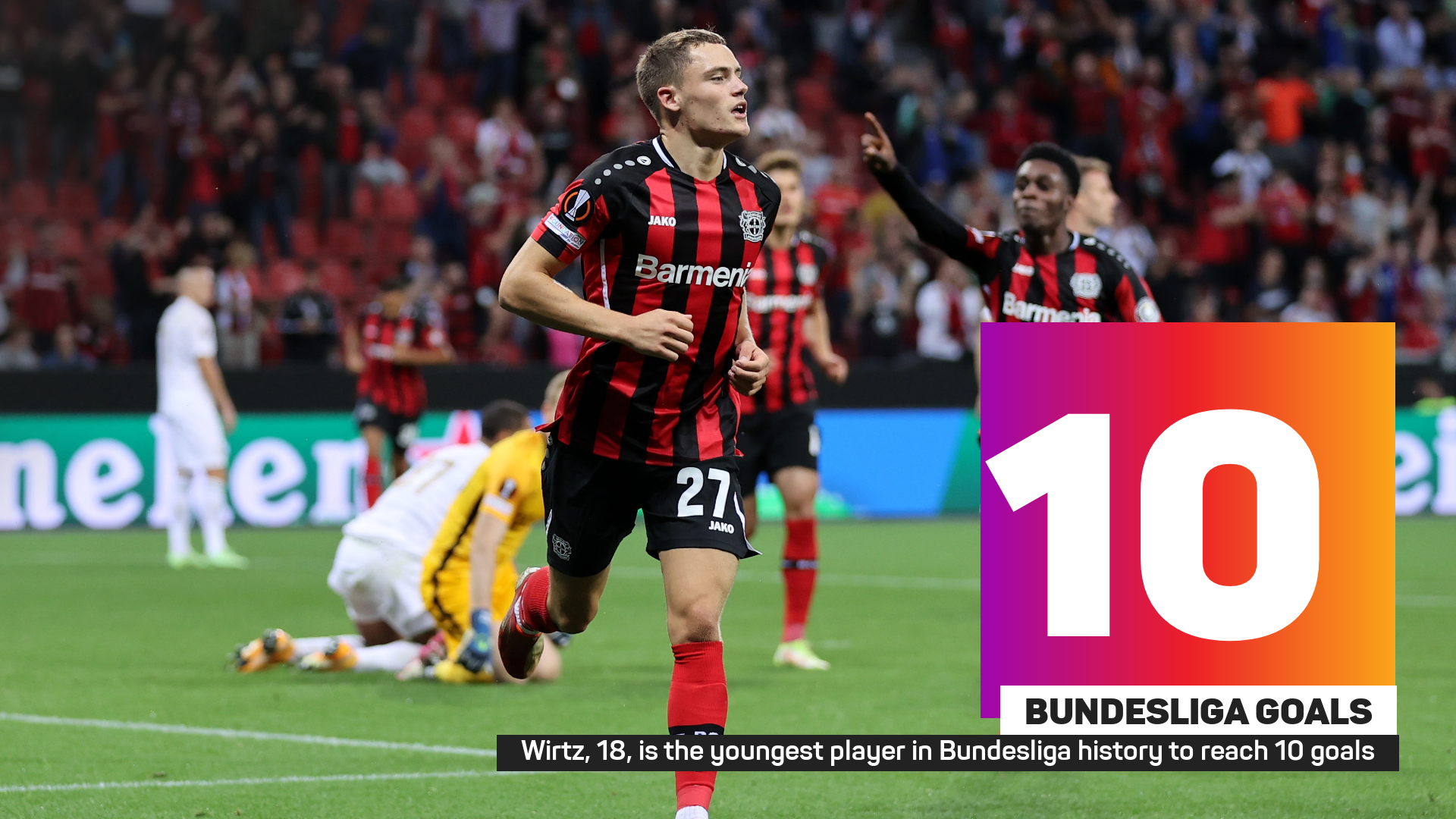 From his junior days, Wirtz has been great at exploiting gaps and creating space in midfield while churning out goalscoring chances with his devastating awareness. Not to mention his defence-splitting passing ability. Five years on and nothing has changed on the international stage.

"Extraordinary player," Rolfes told Stats Perform prior to the international break, after which Leverkusen now prepare to face champions Bayern in a top-of-the-table Bundesliga clash. "I saw him the first time when he was 13 and followed him all the time. Spoke with him before he moved to us, with the parents a lot of times and tried to convince them that it was the right step to come to us and accelerate his development. I and the whole club are very happy that he is with us. That's the interesting thing, I watched him the first time at 13 and he is still playing the same. 14,15, 16, always in that kind of style."

When a player breaks a record held by Havertz at Leverkusen, it is a sign to sit up and take notice.

Wirtz was swiftly thrust into the first team, becoming Leverkusen's youngest-ever debutant at the age of 17 years and 16 days, eclipsing Havertz's record, in last season's 4-1 rout of Werder Bremen in 2019-20. After a handful of appearances in the coronavirus-hit campaign, Wirtz played 29 Bundesliga games, which yielded five goals and as many assists in the post-Havertz era in 2020-21. In February 2021, Wirtz became the first player in the league's history to score five goals before celebrating his 18th birthday.

So, when it comes to comparing Wirtz to Havertz through their first 42 Bundesliga appearances with Leverkusen, how do they stack up against each other?

Wirtz has an equal split between goals and assists (10 each), averaging his 20 goal involvements once every 148 minutes across his top-flight career so far. That's quicker than Havertz managed at the same stage of his Bundesliga career, with his 16 goal involvements in his first 42 apps coming at an average of 165 minutes.

Wirtz also proved a shade more productive in front of goal, with an expected goals per 90 average of 0.16 compared to Havertz's 0.14, but the now-Chelsea forward was able to get more involved in the average game with 65 touches per 90 compared to Wirtz's 58 per 90.

"I wouldn't say they're similar. They're for sure similar in terms of extraordinary qualities and potential for really big careers," Rolfes said. "I would say at the end, Kai plays a little bit more forward and is very good in going deep with a lot of speed. Sometimes it doesn’t look like it because he is so tall but he is incredibly fast. Very direct, fantastic shot with his left foot and a good header. With his height, a very good header of the ball.

"With Florian, I think from a positional sense he is a little bit deeper. More technique in small spaces I would say. Kai likes to use his speed. They are quite different. They unfortunately only played/trained half a year together. It would be nice to have them both together in the squad at the moment because one right foot, one left. They would fit very good together."

With so much attention from a very young age, it is easy for some players to get swept up amid the hype and interest. Not Wirtz.

Wirtz has continued to shatter records and dazzle in the Bundesliga. Against Mainz on matchday six of this season, the Germany international became the youngest player to score 10 goals in Germany’s top-flight, doing so 208 days younger than Lukas Podolski (18 years, 353 days for Cologne in 2004).

No player in the Bundesliga this season has more assists than Wirtz (five) through seven rounds.

With four league goals in just six appearances, he is already only one goal shy of matching last season's haul, despite an expected goals (xG) goal value of 1.0 – no other player has such a large difference between his goals and expected goals.

His nine goal involvements in this season's Bundesliga are only surpassed by Dortmund star Erling Haaland (10), while Wirtz has the best shot conversion rate (36.4 per cent) among all players with at least three goals in 2021-22.

As Wirtz goes from prospect to genuine star, it all comes down to his mindset.

"The attitude is very good. With players and we could see it with Kai Havertz, they know their quality. They are 18 and self-confident because they know about their quality. Special players have that – they can feel that, feel it directly on the pitch. Playing with other good players, they're able to handle it and adapt to the different speed of the game," said Rolfes.

"In that case, they are quite far [developed] and they know there's interest in them because also with 14, 15, 16 it's normal big clubs watched him play. With Florian and Kai, it's quite the same. They always know they’re interesting and extraordinary players."

In all competitions in 2021-22, Wirtz (11) is the only player in Europe's big-five leagues 18 or younger to be involved in seven or more goals, having already found the back of the net twice in the Europa League. 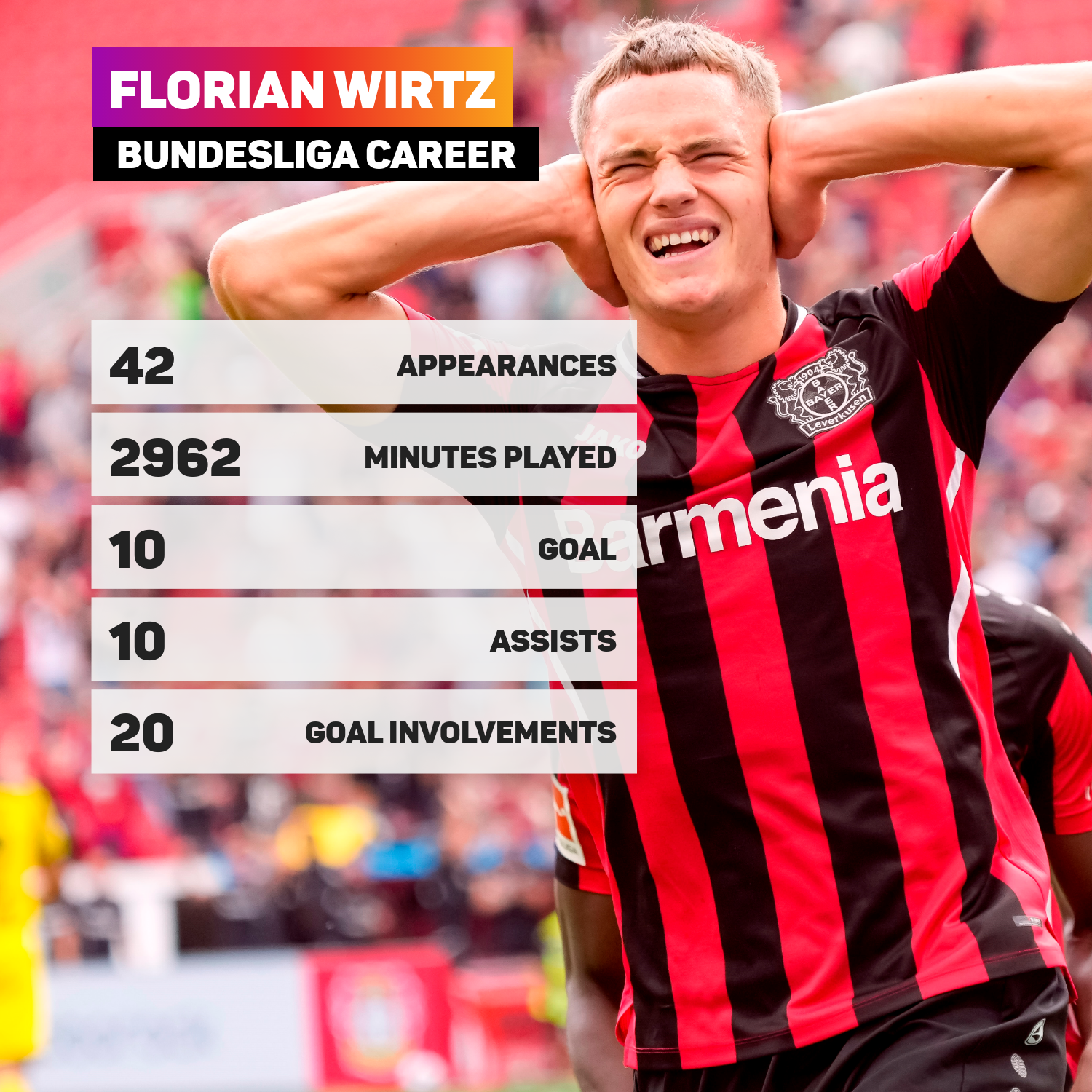 Wirtz has been involved in a goal across all competitions every 47 minutes so far this term – at least up until the international break, it was the best rate of all players in Europe's top five leagues with at least 500 minutes, ahead of Haaland (51 mins), Real Madrid's Karim Benzema (52 mins), Bayern talisman Robert Lewandowski (60 mins) and Liverpool star Mohamed Salah (65 mins).

"In the youth teams, the difference in the quality between him and others was much higher. The game in the youth is around them. Now, he also has a big influence on the game, but he has to position himself better to get the ball and use his quality. Players with extraordinary quality have the ability to find the right spaces but in professional teams they have to wait a little bit in their position and then use their quality," former Leverkusen midfielder Rolfes said. "Compared to the youth where they are doing everything."

It's a frightening thought when you remember Wirtz only celebrated his 18th birthday in May and consider how much growth there is to come from Leverkusen’s prized asset.

Despite being so young, Wirtz is already important in Leverkusen's attacking production – he's been involved in 26 open-play attacking sequences in the Bundesliga this season, with only two players at the club involved in more. Of those 26, 12 have come as the creator of the chance, which is more than any Leverkusen team-mate.

"He will improve year by year. Although he already has a high level. His biggest strength and you could see that in all the years in the youth team, is that he gives his best in each game," added Rolfes. "Doesn't matter where he was playing or which team-mates he was playing with. The first team, U19, U13 etc, he was always giving his best. That is a key element in his development that he is able to adapt at higher levels but he has ambition to always improve and you have to improve.

"Sometimes improvement is also a little bit about changing your game. For sure the opponents want to defend him and watch him, so improvement is sometimes changing a little bit. I'm totally convinced he will have a great career because he has the right mindset to develop. If he keeps that, he is 18 and young, it's a really young guy and he has strengthen his personality etc – that’s normal. We all know how we've been at 18 but if he keeps his mindset and development, he will have a fantastic career."

Devin Booker grabbed his left hamstring in the second quarter of Tuesday's win over the Golden State Warriors.

Allegri calls for patience: It has not been an 'easy time' for Juventus

Juventus are well off the title pace and Massimiliano Allegri is re-aligning the side's goals for the campaign.

LeBron James will miss Tuesday's game against the Sacramento Kings and is set to be unavailable for 10 days.