Portugal great Cristiano Ronaldo is the leading scorer, but there have been many unpredictable elements to the opening stages of Euro 2020.

We had to wait an extra year, but the Euro 2020 group stage threw up drama and records – and in terms of goals it delivered magnificently.

With the likes of Cristiano Ronaldo and Romelu Lukaku hitting their stride, it was a feast for the strikers, with 94 goals scored across the 36 games.

That represented a massive raising of the bar after only 69 goals were netted at the same stage in the 2016 tournament.

Here, Stats Perform looks at the most eye-catching numbers that defined the first 13 days of this delayed tournament – ahead of the do-or-die knockout stage getting under way.

Ronaldo making up for lost time

Cristiano Ronaldo became the first player to score as many as five goals in the group stages of a single European Championship since Michel Platini bagged seven for France in 1984, on his way to a nine-goal tournament tally. Three of Ronaldo's goals for Portugal at this tournament have been penalties, while Platini netted just one spot-kick during France's run 37 years ago.

Impressively, Platini's goals in 1984 came from an expected goals (xG) rate of just 3.32, while Ronaldo has recorded his five from a total of 4.71 so far. Opta builds its expected goals data by measuring the quality of an attempt based on variables such as assist type, shot angle and distance from goal, whether it was a headed shot and whether it was defined as a big chance. It means Ronaldo has put away approximately the number of goals he should have expected to score.

Ronaldo scored twice from the penalty spot in Wednesday's 2-2 draw with France, the first game in the history of the Euros to see three spot-kicks scored, excluding shoot-outs.

Defending champions Portugal have been far from perfect, however, dropping a competition-high five points from winning positions.

While Ronaldo has the most goals of any player so far in these finals, he has not been able to keep up with the rising tide of own goals. There have been a staggering eight, as many as were scored between the 1980 and 2016 editions combined. 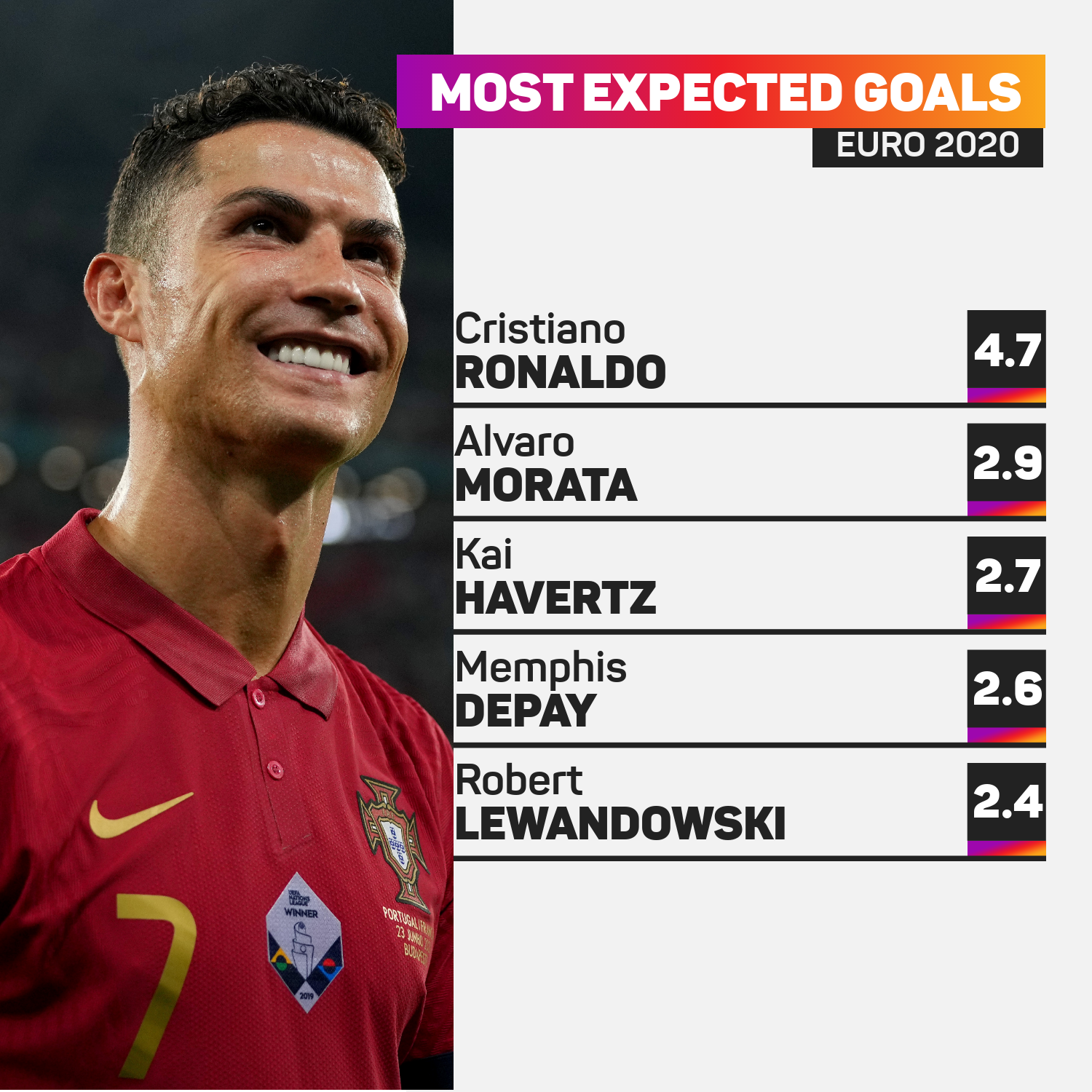 Why wait until seeing the whites of the goalkeeper's eyes before offloading a shot?

Patrik Schick had one quick glance towards David Marshall's goal and let fly from 49.7 yards at Hampden Park to put the Czech Republic 2-0 in front against Scotland. That incredible moment gave Schick the longest-range strike on record at the European Championship, with such measured distances available from the 1980 tournament onwards.

There were 304 shots from outside the penalty area in the group stage, but only 12 goals scored from such long range. That ratio of one goal for every 25.3 shots from long distance was nevertheless an improvement on the Euro 2016 numbers, when just 16 goals from outside the area were scored from 638 attempts across the whole tournament – one every 39.9 shots.

Belgium and the Netherlands are nations who have experienced mixed fortunes on the football field in the 21st century, but both will feel a big moment could be arriving.

The Belgian Red Devils were absent from all major tournaments between their appearances at the 2002 and 2014 World Cups, while the Dutch were conspicuous by their absence from Euro 2016 and the 2018 World Cup.

Lukaku, with three goals so far, has been a terrific spearhead of the Belgium side, netting 50 per cent of the goals their players have netted (excluding own goals) at Euro 2020 despite only taking 22 per cent of their shots – seven of 32 attempts.

If Lukaku keeps firing, with Kevin De Bruyne and co prompting from midfield, then Belgium, who have never won a World Cup or European Championship, have a strong chance to show why they are ranked by FIFA as the world's number one team.

Belgium exceeded their collective xG tally by 3.15 – scoring seven against xG of 3.85 – the highest number by which any side surpassed their expected goals in their opening three games.

Their neighbours, the Netherlands, have also caught the eye. Ronald Koeman lifted the Oranje from their doldrums and successor Ronald de Boer has guided the team through the group stage as top scorers and with a 100 per cent record.

That Group C success, with eight goals scored and two conceded, came on the back of Georginio Wijnaldum scoring three times. In doing so, he has overtaken Marco van Basten and Dirk Kuyt on the list of the Netherlands' leading international goalscorers, moving to 25, one ahead of the former Milan and Liverpool forwards.

Or, to put it another way, Wijnaldum is halfway to matching Robin van Persie's record haul of 50 international goals. 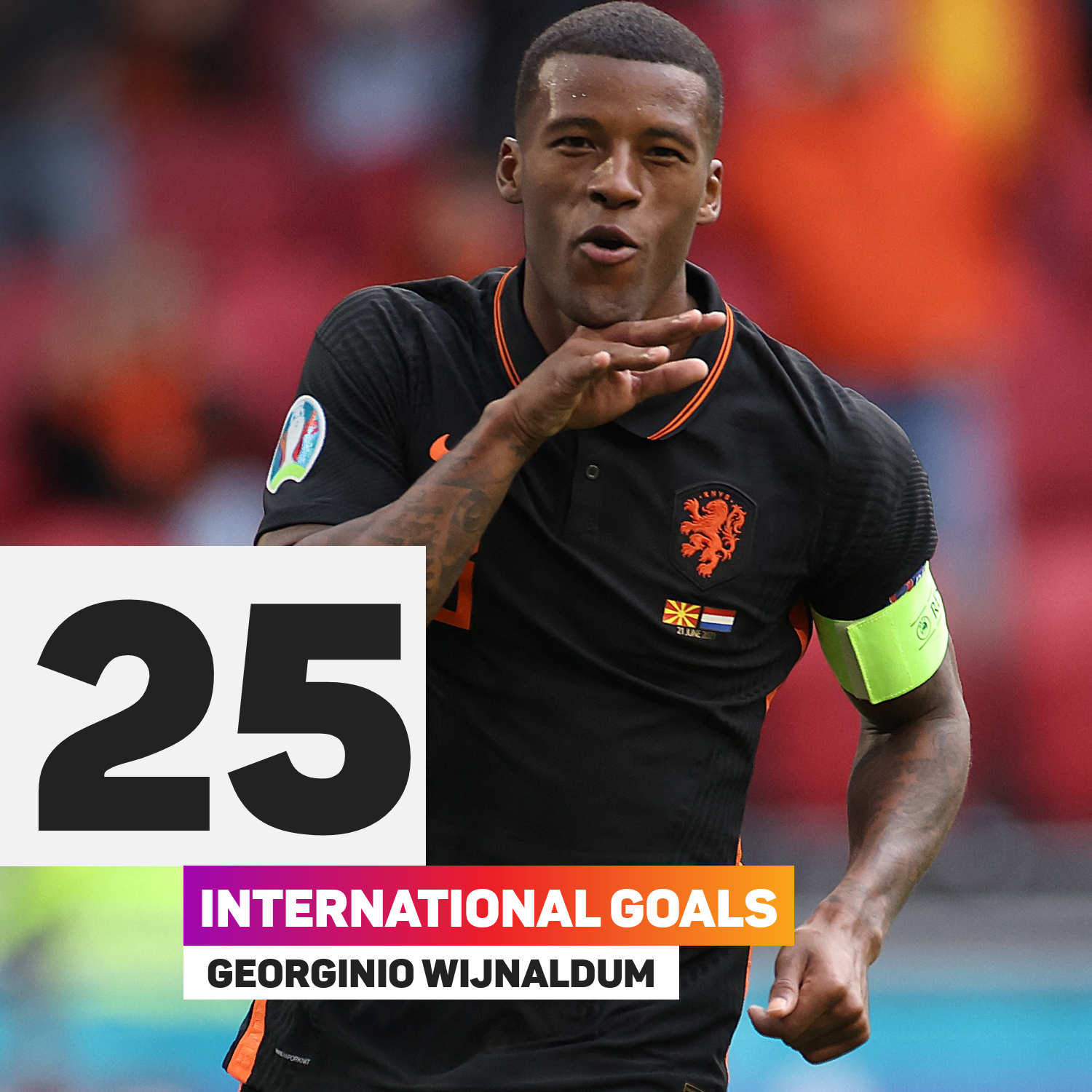 England, by netting only twice, became the lowest-scoring side to ever finish top of a group at a European Championship. They did not so much storm through Group D as plod a methodical path through to the last-16 stage, although an xG of 4.45 suggests England have at least been creating chances, albeit not finishing as well as they might.

Yet England might yet go far. Germany visit Wembley next Tuesday and will encounter English players who have only been dribbled past 12 times in the group stage, the lowest number among all competing teams. England's expected goals against (xGA) tally is a miserly 1.33, the second lowest in the tournament behind an Italy side (1.3) who have got it right at both ends of the pitch to.

Turkey's players were dribbled past on 36 occasions, a group-stage high, and only North Macedonia (8.85) had a higher xGA than Senol Gunes' team (7.69), who failed to live up to 'dark horse' expectations.

Riding their luck? Or being all out of it?

Wales conceded just twice, defying an xGA total of 5.47, and reached the knockout stage on the back of that. The gap of 3.47 between expectation and reality with that metric was the highest among all competing teams.

Conversely, Scotland scored just once against an xG of 4.00 – with 3.00 the highest negative difference between xG and goals scored.

Russia bowed out, and could hardly blame anyone but themselves. Their players made three errors leading to goals – more than any other side and the joint-most by any nation at a finals going back to 1980, the point from which records are available.

Hungary also exited the tournament. They predictably finished last in the 'group of death' – adrift of France, Germany and Portugal – but Hungary were surprisingly ahead for more minutes and trailed for fewer than any other team in that Group F campaign.

Denmark squeezed through in second place behind Belgium in Group B, becoming the first team in European Championship history to reach the knockout stages of the competition having lost their first two group stage games. After the alarm of the Christian Eriksen situation, many would love them to go further.

Would you Luka that!

Luka Modric became the oldest player to score for Croatia at the Euros, netting a gorgeous strike in the 3-1 win against Scotland at the age of 35 years and 286 days. That made it an unusual double for the veteran playmaker, who also holds the record for being Croatia's youngest scorer at the tournament (22 years 73 days versus Austria in 2008).

Modric continues to marvel, and there was a slice of history for another midfielder in the group stage as Switzerland's Steven Zuber became only the third player since 1980 to register three assists in a single European Championship game – doing so against Turkey – after Portugal's Rui Costa in his rampaging 2000 display that tormented England and Denmark's Michael Laudrup in 1984 against Yugoslavia.