Harry Kane endured a difficult game against Scotland, while Ivan Perisic made history as he netted for Croatia.

It was an underwhelming day for England as they could not seal their place in the next round of Euro 2020, though Sweden moved a step closer to at least ensuring they do not go home early.

Nevertheless, Friday was not a day of great entertainment in the European Championship, with no team managing more than one goal among the three matches.

Only one of the three goals on the day was not a penalty, as Ivan Perisic made history when sealing a point for Croatia.

While the matches may not have set pulses racing, there was still plenty to talk about.

Using Opta data, Stats Perform takes a look at some of the best facts from across the day's games.

Good point for Scotland or did their performance merit more? #EURO2020 pic.twitter.com/cpiC954FPC

England failed to make sure of their qualification for the knockout phase as they were held to a 0-0 draw by Scotland, only the fourth goalless game in 115 official fixtures between the old rivals.

Similarly, England had only ever slumped to one other goalless draw at the new Wembley, that stalemate as far back as October 2010 when Fabio Capello's side were held by Montenegro.

Accentuating England's toothlessness was the fact Harry Kane managed only 19 touches of the ball, the fewest he has ever managed for the Three Lions in a game in which he has featured for more than 45 minutes.

The last time he had fewer touches for Spurs while playing for more than 45 minutes was against Manchester city in April 2018 (17 touches in 90 minutes).

Nevertheless, England can seal qualification with a point on Tuesday against the Czech Republic, and they can at least take solace in that this was their 14th clean sheet from their previous 18 matches, evidence that at least one area of the team is functioning properly. 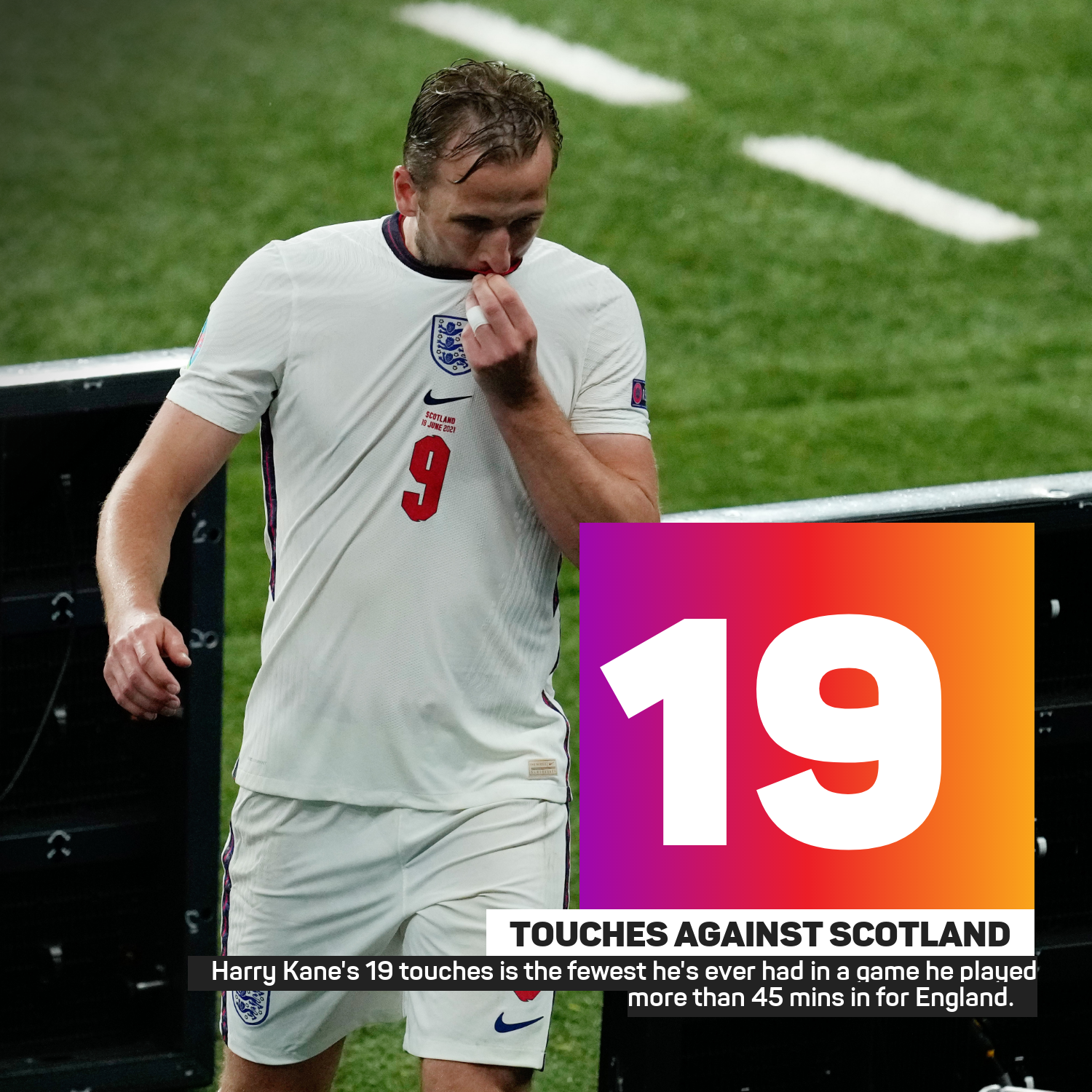 Patrik Schick's bid for the Golden Boot received another boost as he scored a controversial penalty to open the scoring against Croatia, the Bayer Leverkusen striker subsequently becoming the first Czech Republic player to net three or more goals at a major tournament since Milan Baros (five) in Euro 2004.

Schick is also the first player to score each of his team's first three goals of a European Championship tournament since Mario Gomez for Germany in 2012.

But his spot-kick was cancelled out in the second half by Ivan Perisic, who made history in doing so.

The Inter winger became the first Croatian to score at four major international tournaments (2014 and 2018 World Cups, Euro 2016 and Euro 2020).

His powerful strike was his eighth in such tournaments, a figure that only Antoine Griezmann (10), Cristiano Ronaldo (10) and Romelu Lukaku (nine) can better among European players in the past four international events.

He is now just one behind Davor Suker's all-time record of nine goals across World Cups and the European Championship for Croatia.

Could he level the record in Croatia's pivotal final group game against Scotland? 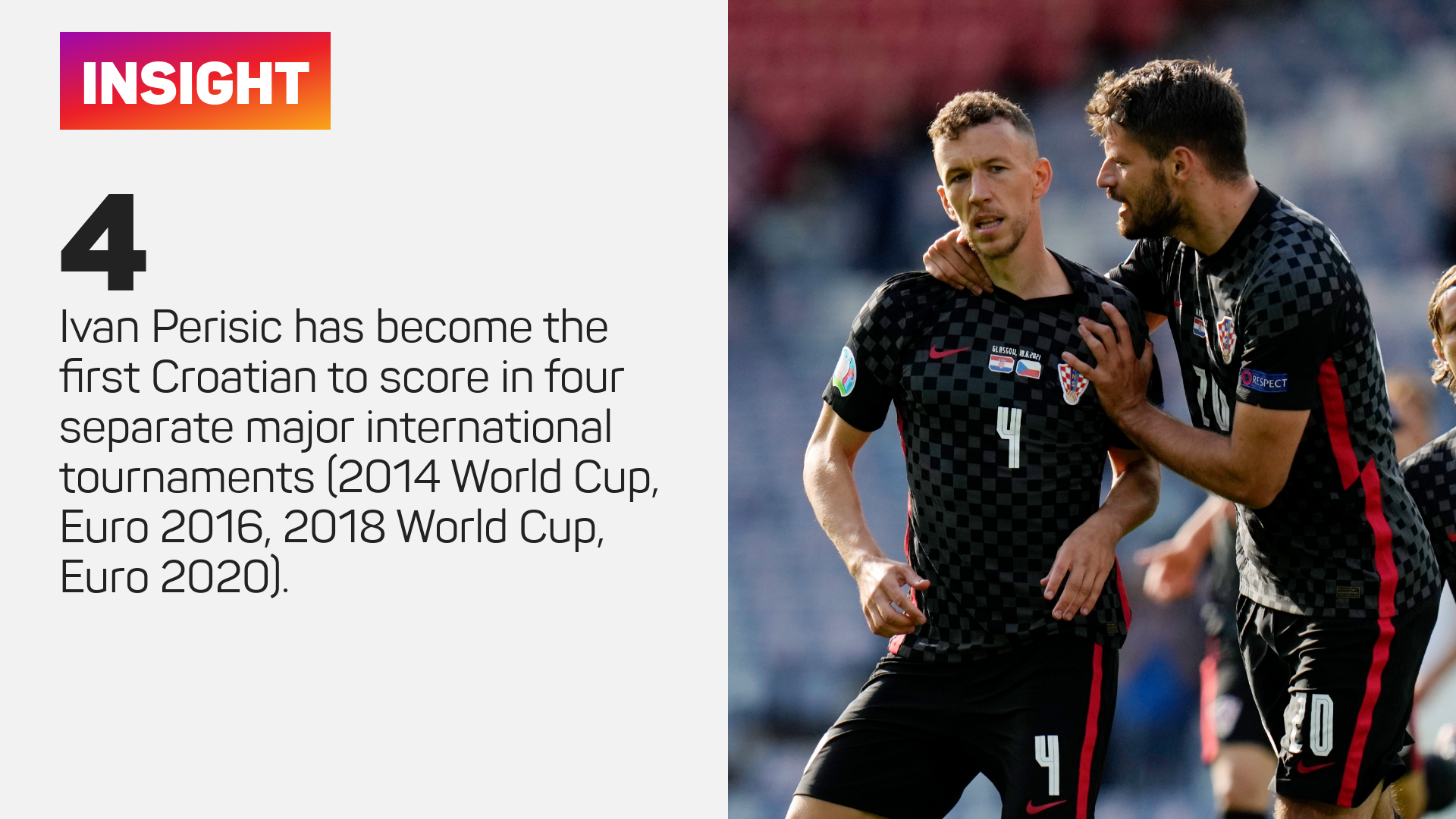 Sweden 1-0 Slovakia: Isak a ray of sunshine in turgid encounter

St Petersburg was not treated to a classic as Sweden narrowly beat Slovakia at the Krestovsky Stadium, but Janne Andersson's men gave themselves a massive boost with respect to potentially reaching the knockout phase.

Emil Forsberg's second-half penalty ultimately proved decisive and ended a run of 365 minutes without a Sweden goal in European Championship tournaments, their most recent goal coming in their Euro 2016 opener.

That was their 23rd second-half goal in the history of the Euros, which equates to 88 percent of their total, the highest percentage of any side with at least three goals in the competition.

Once Sweden went ahead there looked to be little danger of a turnaround, as Slovakia – who had previously looked happy to settle for a point – failed to get a single shot on target, making them only the second team to fail in that regard after Turkey against Italy.

While it was by no means an exhilarating watch, Alexander Isak at least did his best to provide some entertainment.

The Real Sociedad forward completed six dribbles over the course of the match, the most by any player in a single Euro 2020 game and a figure unmatched by a Sweden player since 1992. 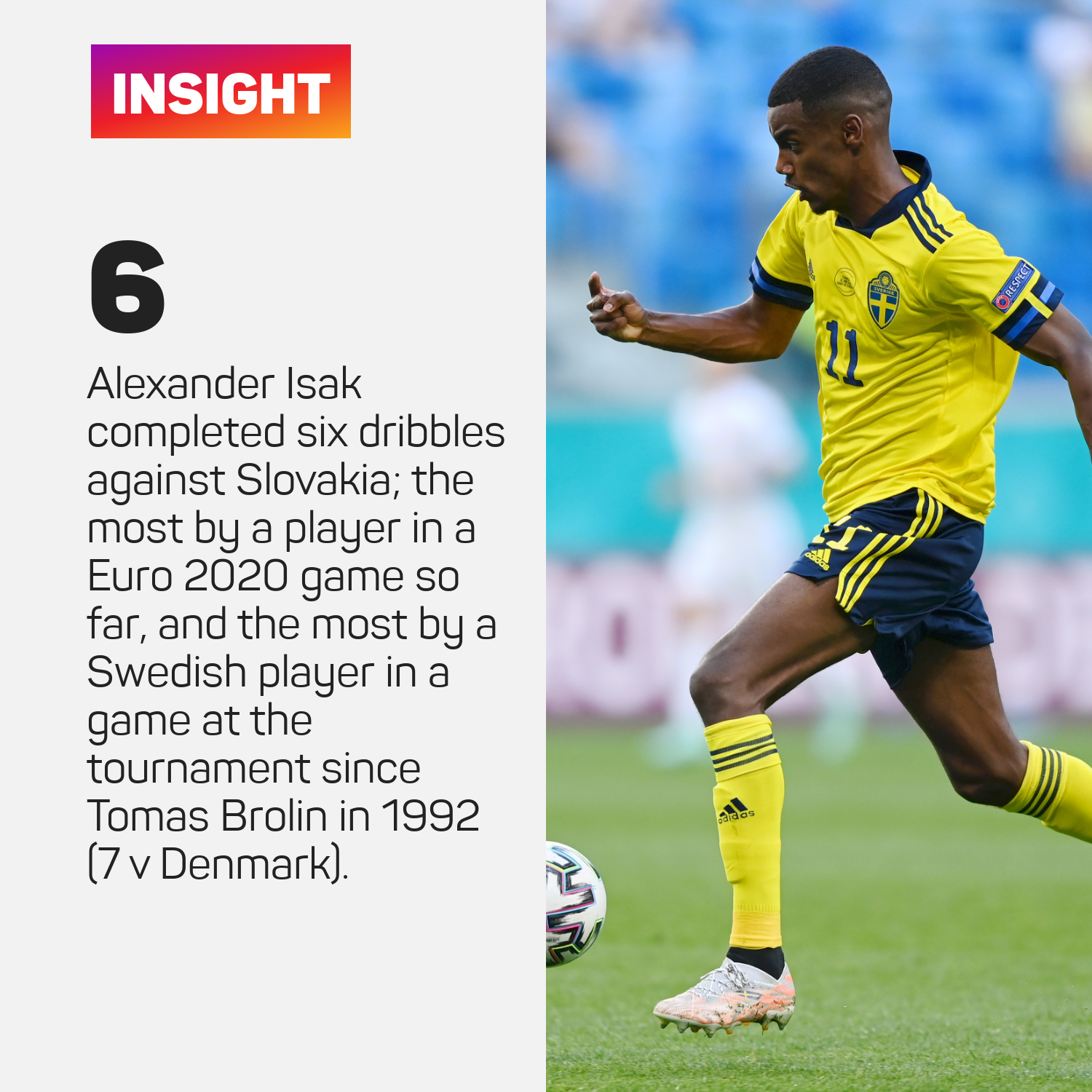