Manchester City's Ederson, one short of a century of clean sheets, says his style of play is now essential for modern goalkeepers.

Manchester City star Ederson does not believe he has been a huge influence on the way goalkeepers in England play as he bids to keep a 100th clean sheet for the club.

The Brazil international will reach a century of shut-outs on Saturday if he does not concede against Watford, a team who have never beaten City in the Premier League and lost the previous 10 meetings by an aggregate score of 37-4.

Since signing from Benfica in 2017, Ederson has been an integral part of Pep Guardiola's set-up, his distribution proving both a valuable counter-attacking weapon and a vital component to City's possession-based approach.

However, he feels the importance of keepers using their feet is simply part of the evolution of the game. 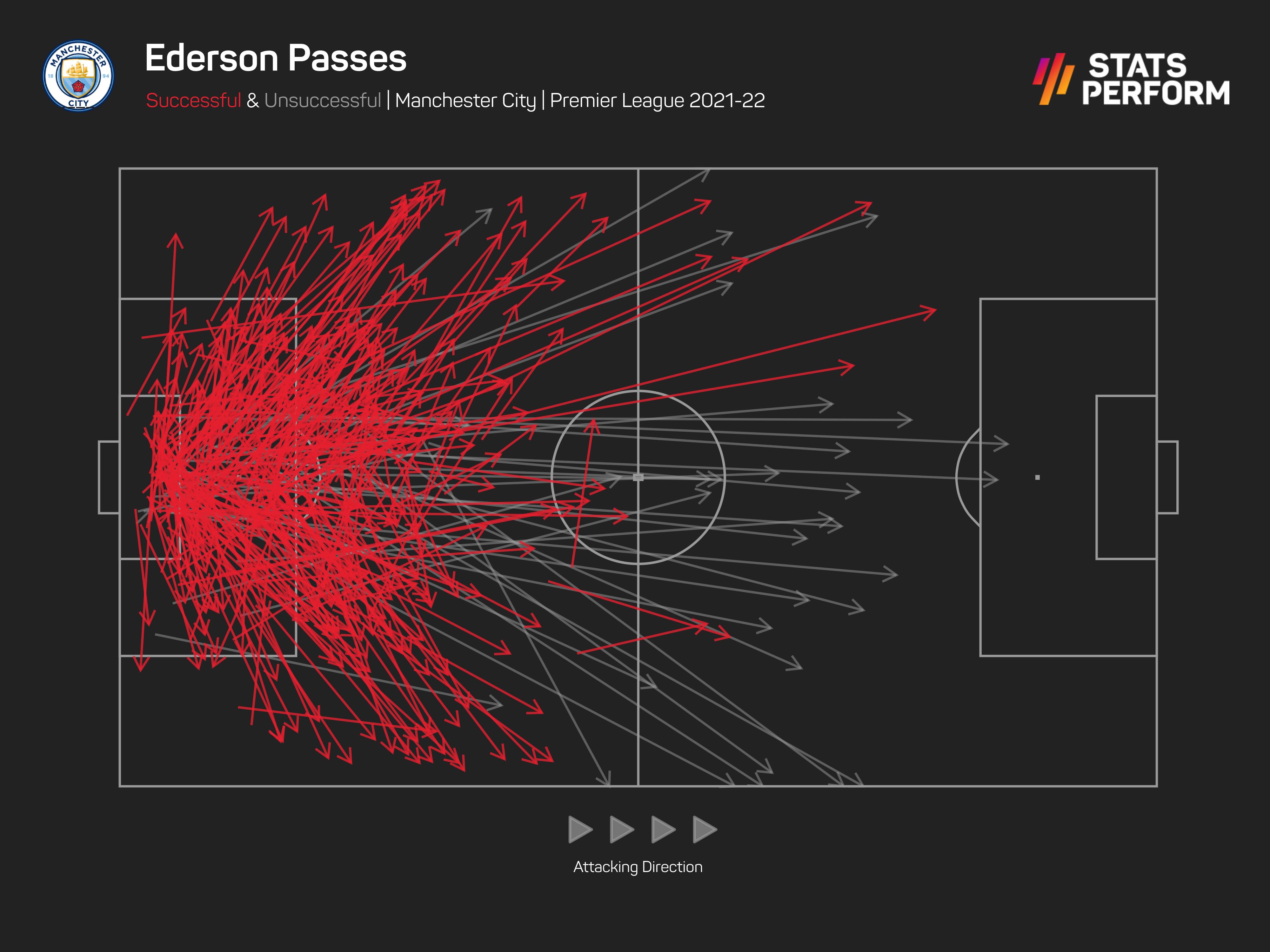 "Nowadays, having a goalkeeper with good feet is essential in any team that likes to build up play from the back," he told Sky Sports.

"I don't think I influenced much. In fact, I have been influenced by other goalkeepers with good feet in the past. But football evolves and players need to evolve with the game as well.

"I just play naturally. It's a matter of concentration. If a goalkeeper misses a pass, there is nobody there who can help you. The goalkeeper is key in our team because we can't make any mistakes in the build-up. But my team-mates offer me a lot of options for the pass, so I'm very relaxed."

Since his City debut, Ederson has created six goalscoring chances, a tally bettered by two keepers in that time: Ben Foster (nine) and Nick Pope (10), each of whom have played for teams with a more direct style.

His contribution to his side's overall approach dwarfs that of any other keeper, though. Ederson has been involved in 226 sequences to end in a shot in the Premier League, with Alisson (138) and David de Gea (127) the next highest on that list. Thirty-four of those involvements have ended in a goal, which is at least 14 more than any other keeper has managed. 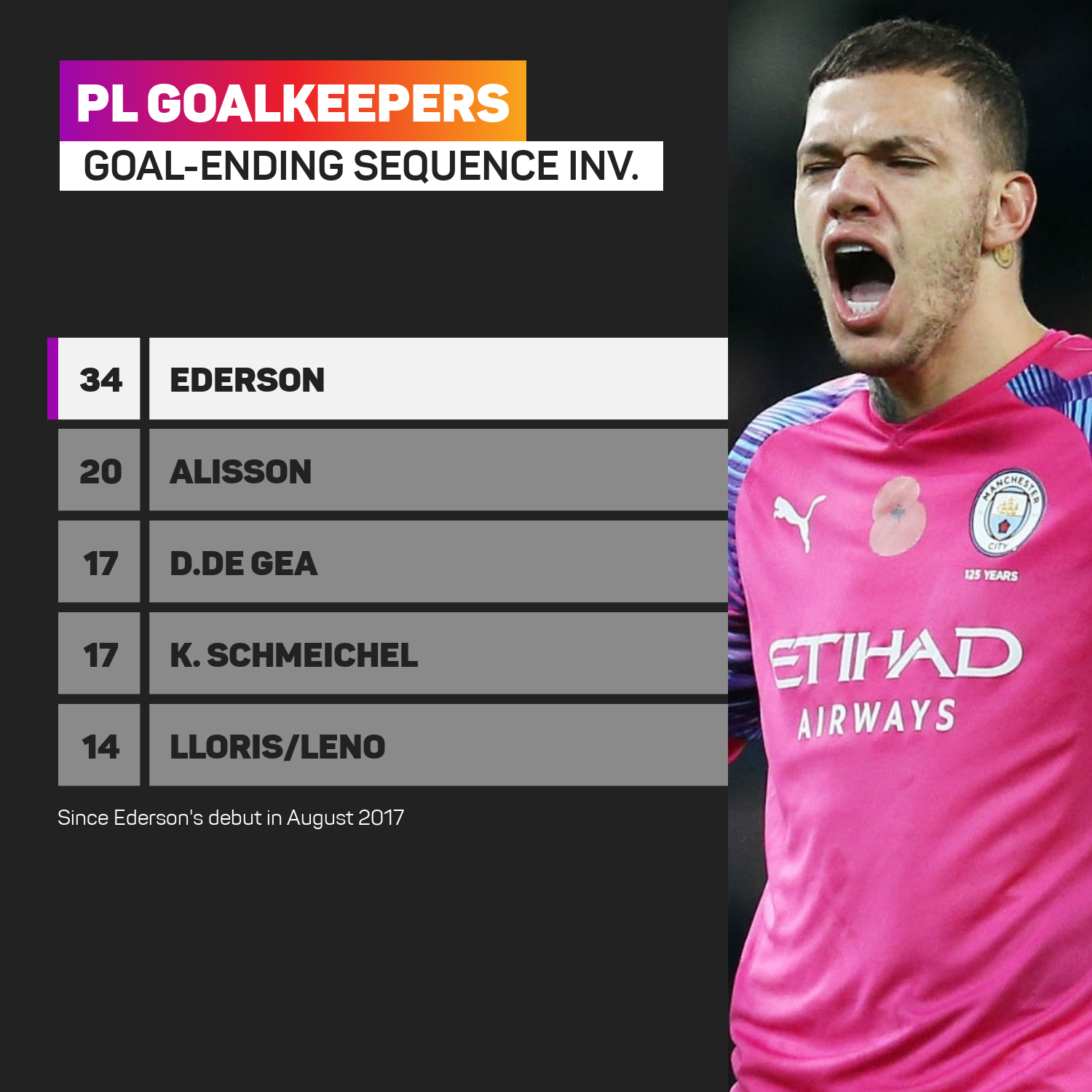 Ederson has also started 66 shot-ending sequences, 22 more than anyone else in his position since his debut, having made 3,390 passes in that time – again, by far the most among keepers.

There may be an element of risk to the way Ederson plays, but it is not without its reward: no keeper comes close to his 78 clean sheets in the league since his arrival in England, and his brilliant save to deny Carney Chukwuemeka helped City win 2-1 at Aston Villa on Wednesday.

"The most important things for a goalkeeper are concentration and decision-making," he said. "In most of the games, we control the ball and we only concede one chance to the opposition team, so concentration is key.

"It's something that comes with my personality: calm and concentration," he adds. "I'm aware that, if I lose focus during any moment of the game, it can end up in a goal for the opponent.

"We can't be attacking all the time, so we need to know how to defend during some stages of the game too. We all know, myself and my team-mates, how important it is to be focused."

On the prospect of 100 clean sheets in what would be his 211th appearance, he added: "It's an important achievement for me, because it means I have kept a clean sheet in almost half of my games for Manchester City.

"The forwards, the midfielders, the defenders, they all do exceptional pressing and defending. The clean sheets involve the whole team, not just me."